School of Library and Information Science alumnus Don Jason III of Cincinnati, Ohio, has recently become a clinical informationist at the University of Cincinnati, where he is now involved in several key initiatives for the Health Sciences Library (HSL). Jason previously held positions at the Northeast Ohio Medical University College of Pharmacy and also the Northeast Ohio Medical University Health Sciences Library.

Jason received an M.L.I.S and a Master of Science in Information Architecture Knowledge Management with an emphasis in health informatics from Kent State University in May 2013. He went on to a National Library of Medicine Associate Fellowship program in Washington, D.C., which concluded in August 2014. In his new position in Cincinnati, Jason was quickly given three prominent roles to manage. His first main job relies heavily on his background with health informatics; he said Kent State did an excellent job of preparing him for the workforce with its fast-paced, rigorous program.

Second, he is involved in a Research Data Initiative, which seeks to find the HSL’s niche in supporting the Clinical and Translational Sciences Award (a government-funded research grant) awarded to the University of Cincinnati and Cincinnati Children’s Hospital.

Jason said one of his favorite parts of the job is teaching classes and holding small-group consultations to connect researchers and the tools they need to conduct their research.

“Third, I am involved with the outreach initiatives of the library. I am working with the current outreach librarian to present disaster preparedness resources to local first responder groups,” Jason said. “We are also presenting senior health resources at nursing homes and assisted living facilities.”

With the many responsibilities he has been given, Jason said he believes the job market is favorable for M.L.I.S. and health informatics graduates today.

Amy Koshoffer, a colleague of Jason’s at the University of Cincinnati, is also a SLIS alumna. She earned her M.L.I.S. in 2007 through the distance-learning program. Koshoffer agreed that the marketplace for librarians is good, but they must keep up to date with their education and even consider being specialized.

“I think that library jobs are evolving quickly, and graduating students should be aware that continuing education and specialization are very important,” Koshoffer said. “Libraries will always have their core functions of preserving information for future access and use. But new missions such as the research data services and digital scholarship are shaping the job market for M.L.I.S. degree holders. Job seekers must be prepared to constantly train for the changing skills needed and to think about adding a variety of non-traditional skills such as data management or strong science skills to their toolbox.”

Note: Don Jason was named IAKM Alumnus of the Year for 2015 and was honored at an event in Kent, Ohio, in April 2015. 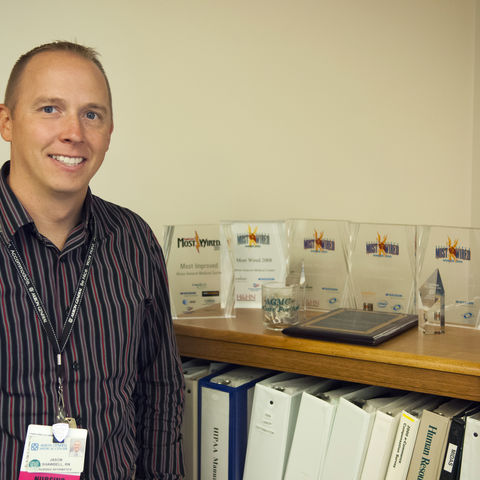 The School of Library and Information Science (SLIS) at Kent State University has entered a collaboration with the Healthcare Information and Management Systems Society (HIMSS) to support their initiative in helping veterans connect to education and career opportunities in health care informatics and information management.