“Siri” and other personal digital assistants could be a lot more helpful to people if only they were subjected to more wide-reaching usability testing.That’s according to School of Library and Information Science alumna Alesha Arp, M.S. ’14, (IAKM, user experience design), and Scott Ryan-Hart, a user experience design (UXD) student who will  graduate in May 2015.

Arp, who currently based in Southern California, and Ryan-Hart, who currently lives in Columbus, Ohio, worked together on a final project for their master’s program in UXD. They examined the usability issues of voice command technology, like Siri, comparing users’ expectations, perceptions and satisfaction levels, and left the research open for others to follow with other interfaces.

(Note: Alesha Arp and Scott Ryan-Hart published an article based on this research on UX Matters in June 2015.)

The project investigated how people’s perceptions of the iOS voice control system (Siri) did not match up with their expectations of what the program could do. The students then generated some typical personas of Siri users and determined a potential set of tutorials to meet each of the personas’ expectations.

“I think that voice control and other non-manual interaction methods for devices are only going to become more and more prevalent,” Ryan-Hart said. “It is important to start getting a better understanding of how expectations can color usage when the actual capabilities do not match those expectations.”

The field of user experience design, or UXD, addresses the structural, informational, psychological and emotional aspects of what makes a successful user interface across various platforms including web, mobile and tablets. It goes beyond traditional web design because it focuses on the user rather than the device or platform.

Arp said she became interested in UXD and Kent State’s graduate program because it combines many of her skills into one field and one course of study.

As UXD is a relatively new area of study, Arp said the professionals in the field make up a small community. She expressed the need for more wide-reaching usability testing because voice-activated systems aren’t necessarily doing everything people expect them to do, which she validated through her research.

In addition to her master’s degree, Arp holds a bachelor’s degree from San Diego State University. She has previously worked on usability studies and performed usability research and web usability studies for a couple of small companies in Southern California.

She said she imagines her degree will place her on a “very upward trajectory” and has recently accepted a position as a UX researcher for DealerSocket, a “proactive automotive software solution that provides technology and innovation.”

In one word, Arp described her experience with Kent State’s UXD program as “phenomenal.”

“One of the things that differentiates the Kent State user experience design program from anything else that I’m aware of is that it is very hands-on, very pragmatic and the instructors are active in the field,” she said. “So everything we are doing is current.”

Ryan-Hart said the decision to pursue his graduate degree in UXD at Kent State was easy, especially after having received his bachelor’s degree in mathematics from the university in 1997.

“I have had a delightful time in this program,” Ryan-Hart said. “I cannot wait to use what I have learned in the next chapter of my employment, whatever that may be.” 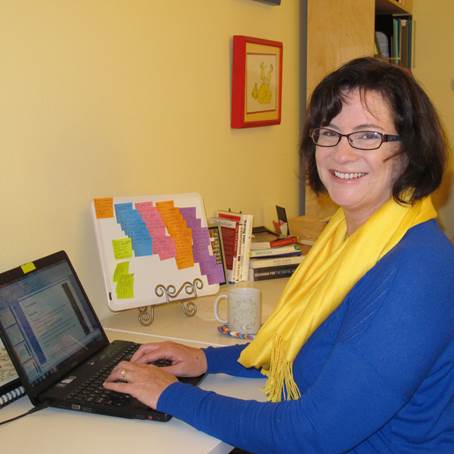