The Fight Song blares down Main Street, the city of Kent is flooded with blue and gold, alumni and friends gather and reminisce about their Kent State days, fans pack the stadium to cheer on their beloved Flashes and the entire campus booms with Golden Flash pride.

While Homecoming is one of Kent State’s longest-standing traditions, few of us know how it evolved at the Kent Campus. Actually, the event that came to be known as Homecoming began on May 16, 1914, when President John McGilvrey invited all extension students (many of whom had never been on the campus) to come to Kent State Normal School for “Extension Day.”

A crowd of nearly 3,000 gathered on the campus in front of “Walden Hall” (later renamed Lowry Hall) to hear songs by the Normal Glee Club, an address by Dr. Charles H. Judd of the University of Chicago and view a Maypole dance featuring 84 Normal School young women in flowing white gowns. The event was later renamed “Homecoming Day,” with alumni, former students and friends of the school invited to return to the campus for its celebration. (The Years of Youth, pgs. 50-51)

To celebrate 100 years of the event—once it was officially known as “Homecoming”—here’s a look back through the decades at some highlights. 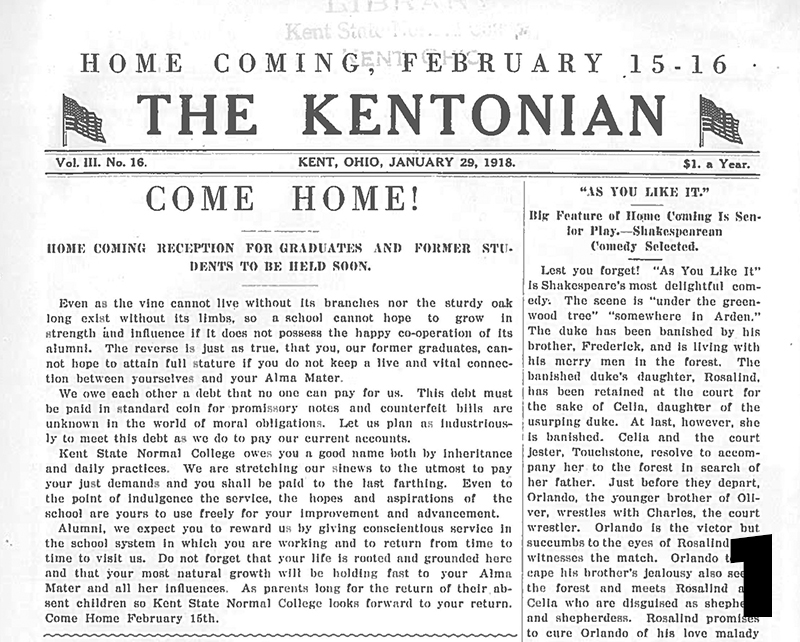 February 15-16, 1918: Kent State’s first “Home Coming” (spelled as two words then) takes place with only 72 alumni in attendance (1). The program includes the senior class play, Shakespeare’s “As You Like It,” indoor baseball games between faculty and students, a luncheon and a dance in Moulton Hall. (The Kentonian, Jan. 29, 1918)

May 16, 1925: At the first of two Homecomings held in 1925, the new Wills Gymnasium is dedicated with speeches and the singing of college songs. Afterward, the 8th annual Homecoming dance, with more than 1,000 in attendance, is held in the newly dedicated gymnasium (2). Everyone joins in a grand march and then dances to music by the Red Apple Club Orchestra of Detroit until 1:30 a.m. (The Kentonian, 1926; The Years of Youth, pg. 81)

November 14, 1925: In keeping with the custom on other campuses, many of the students and alumni decide to hold a second Homecoming in conjunction with a football game in the fall. After a string of 39 winless football games, the Kent State team makes history by winning over West Liberty of West Virginia, 7-6, before 2,000 frenzied “Homecoming” fans at Rockwell Field. (The Years of Youth, pgs. 73, 81)

November 16, 1929: An official “Fall Home-Coming was given a test in the hastily arranged program built around the Baldwin-Wallace football game,” notes The Kent Stater, observing that the crowd “was not as large as might have been desired.” Kent State loses 18-0 to the undefeated Baldwin-Wallace team, although “on two occasions Old Kent seriously threatened to score,” according to the yearbook. (The Kent Stater, Nov. 22, 1929; The Chestnut Burr, 1930, pgs. 148, 178; The Years of Youth, pg. 81) 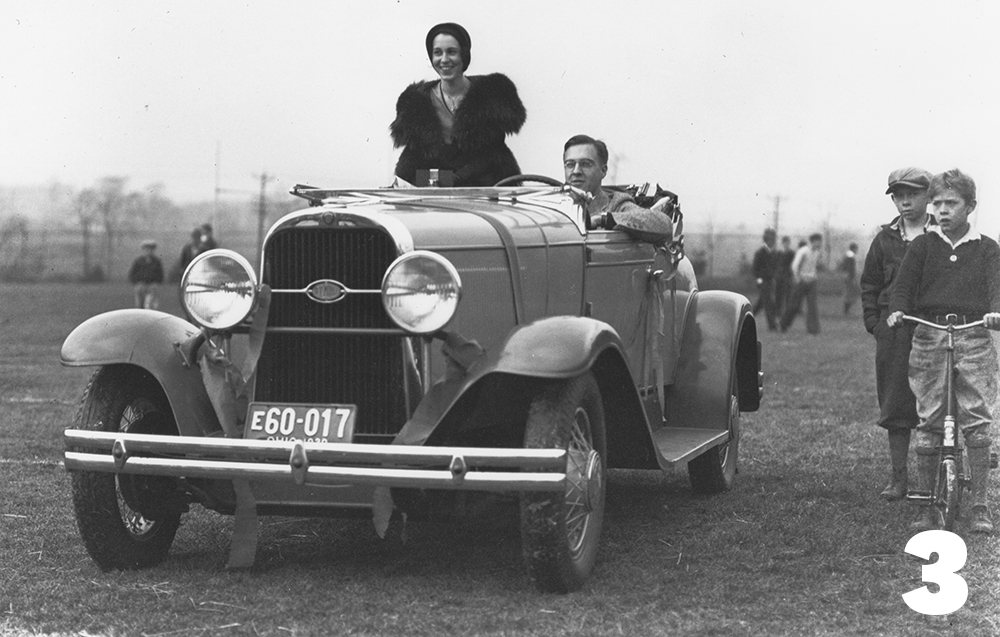 November 15, 1930: The Kent Stater sponsors the election of Kent State’s first Homecoming queen, and students vote for junior Mary Donze, a member of the Alpha Sigma Alpha sorority and the Kent Stater staff. She is paraded around Bowers field at halftime in an Oldsmobile cabriolet driven by escort James Noble Holm, the business manager of The Chestnut Burr (3). Festivities include a Golden Flashes win over Defiance, 13-6, and the Homecoming dance in Wills Gymnasium. After 1930, the spring festival, featuring the Maypole dance and group singing on the front campus, becomes known as “Campus Day.” (The Kent Stater, Nov. 12 & 19, 1930; A Book of Memories, pg. 48) 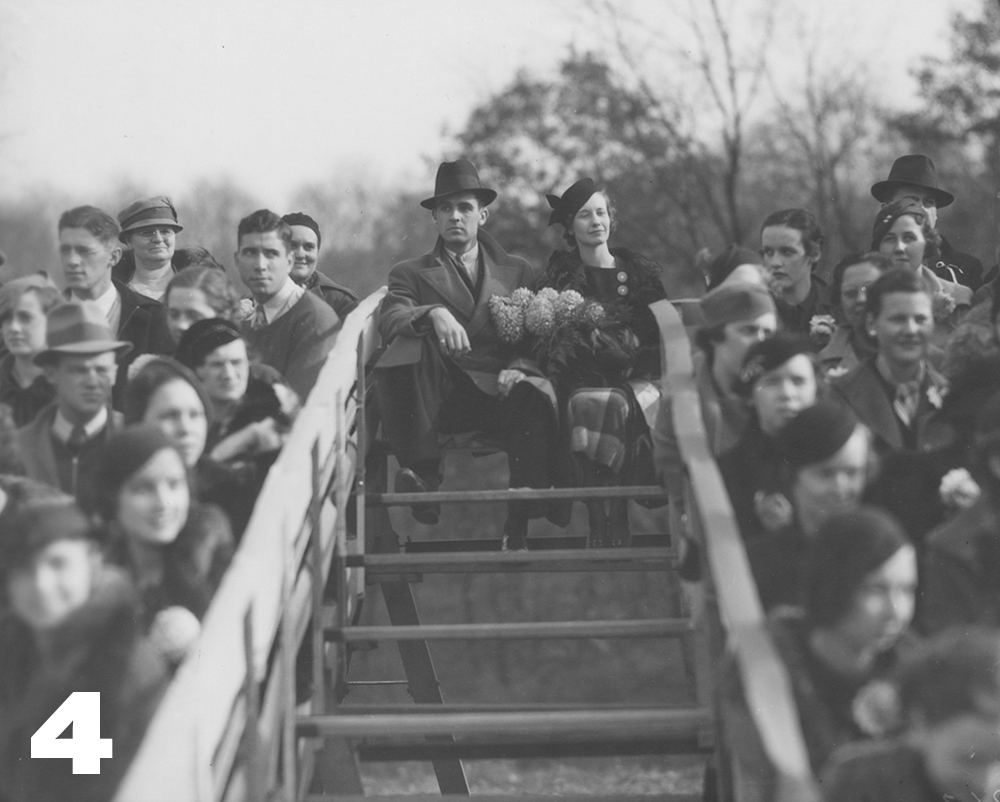 November 3-4, 1934: Homecoming queen Elizabeth “Billie” Streine and her escort, Jay Miller, (4) sit in the bleachers at the Hiram-Kent State football game (Kent State wins, 26-6), which is punctuated at halftime by the finish of the annual cross-country run. They also welcome alumni to the College Theatre production of Death Takes a Holiday and the Homecoming dance. Fraternities and sororities compete for prizes by decorating their chapter houses to greet Greek alumni. (The Kent Stater, Nov. 1, 1934)

“During the period between 1943-45, KSU didn’t field a football team because of World War II [and no Homecoming queens were elected]. Nevertheless, there still were two fall Homecomings, although the records have been lost as to which years they were held.” (The Daily Kent Stater, Oct. 9, 1981) 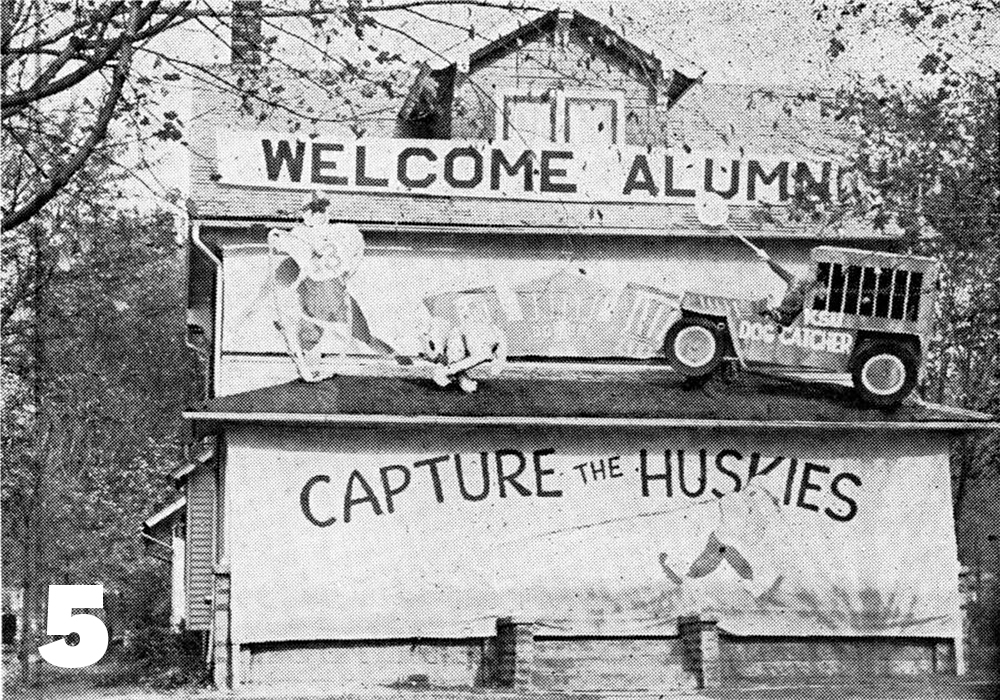 October 29, 1949: At one of the most successful Homecomings in years, more than 8,000 people return to campus and the Golden Flashes win against the University of Connecticut, 27-0. Phi Beta Phi wins the best decorated Greek house, featuring a KSU dogcatcher chasing a UConn Huskie, in the fraternity Homecoming competition (5). (The Kent Stater, Nov. 1, 1949) 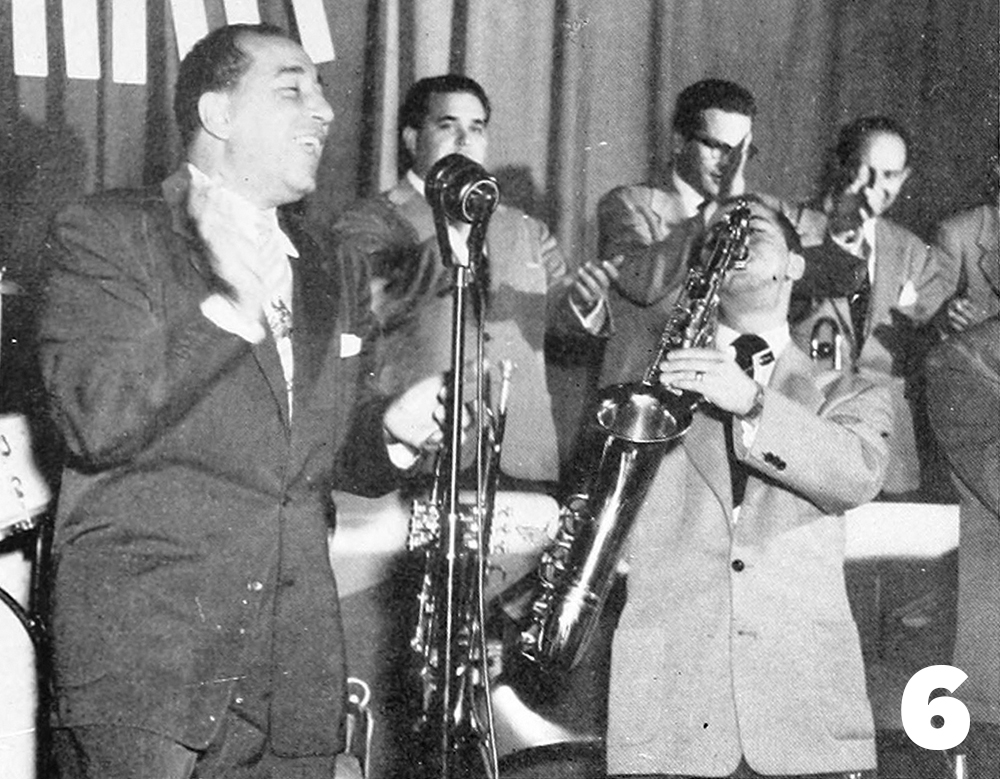 November 4, 1950: Nearly 7,000 fans cheer Kent State on to a 19-6 victory over the Bowling Green Falcons at the Homecoming game. Beating the Falcons for the first time in four years entitles the Golden Flashes to keep the “painted pig”—the ball used at the rivals’ first football game—until the Falcons win it back. A record crowd dances to the music of Louis Prima and his orchestra (6) in the new physical education building. (The Chestnut Burr, 1951, pgs. 120, 121) 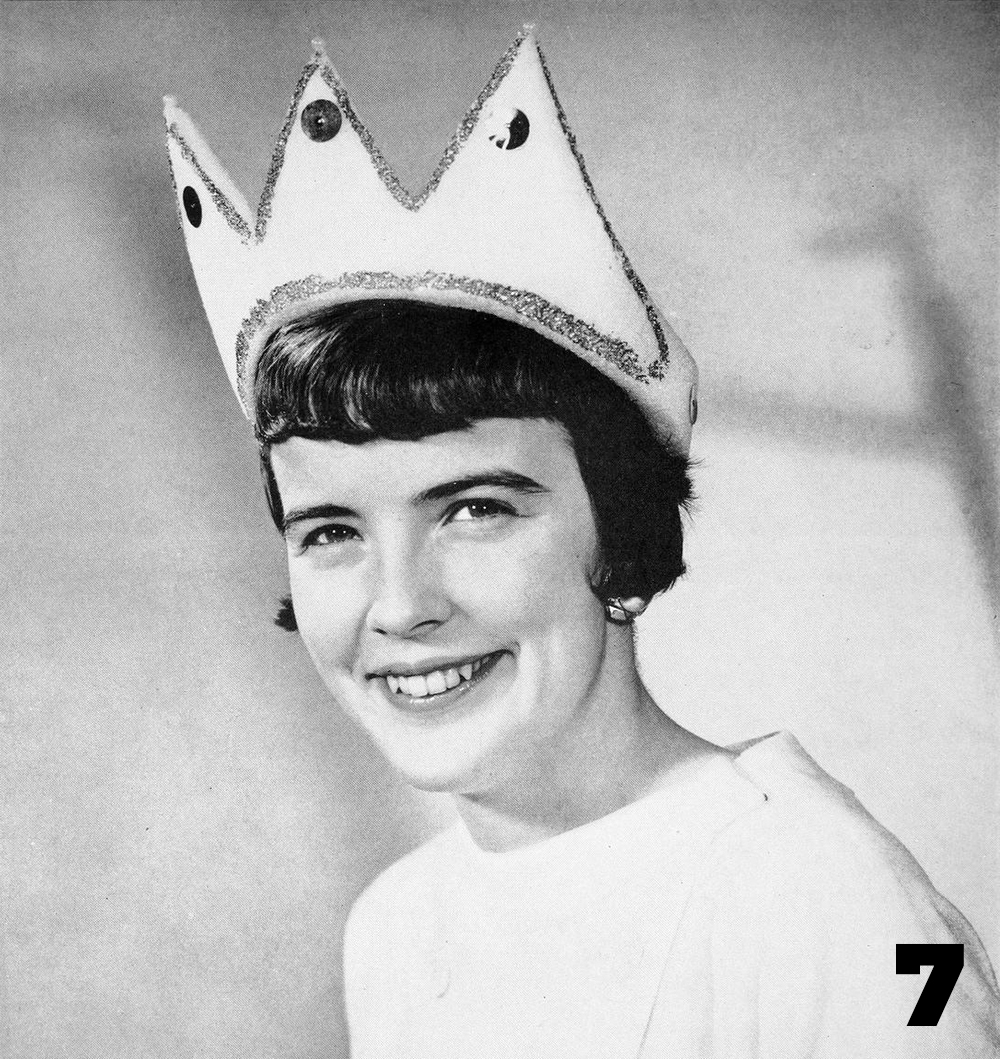 October 26-27, 1962: Fans brave 40-degree weather to watch the Golden Flashes nudge the Toledo Rockets, 20-18, and gain their second MAC victory. When President George Bowman walks onto the football field to make his traditional Homecoming remarks, a student guard from the Army ROTC, apparently not recognizing the president, halts him and asks to see his field pass. The president disregards the order, but during his remarks he notes that it is the first time in 18 ½ years that he is appearing on the field illegally. (The Daily Kent Stater, Oct. 30, 1962) 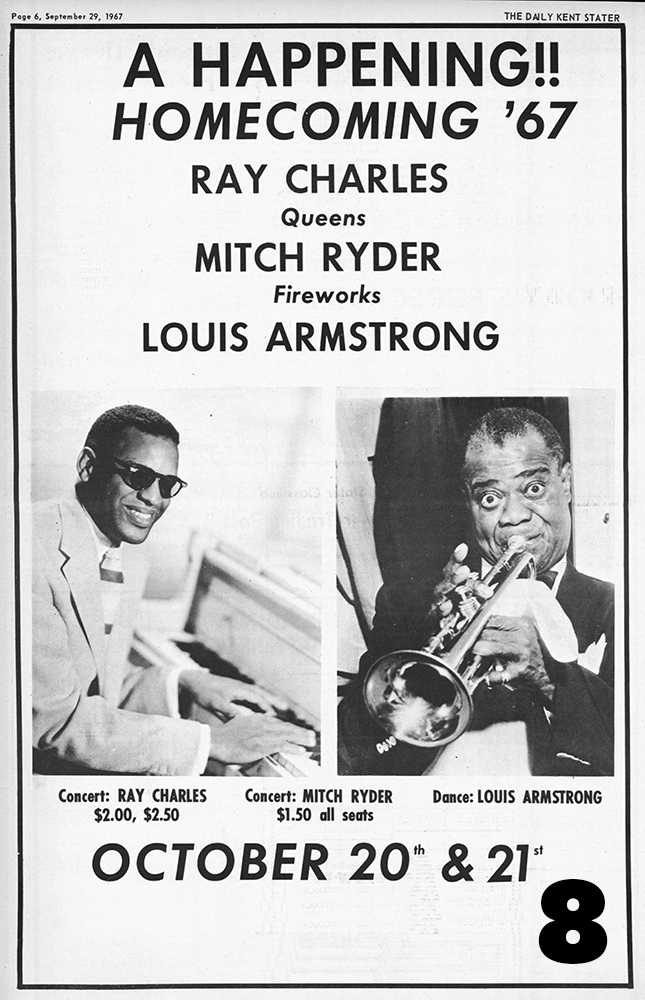 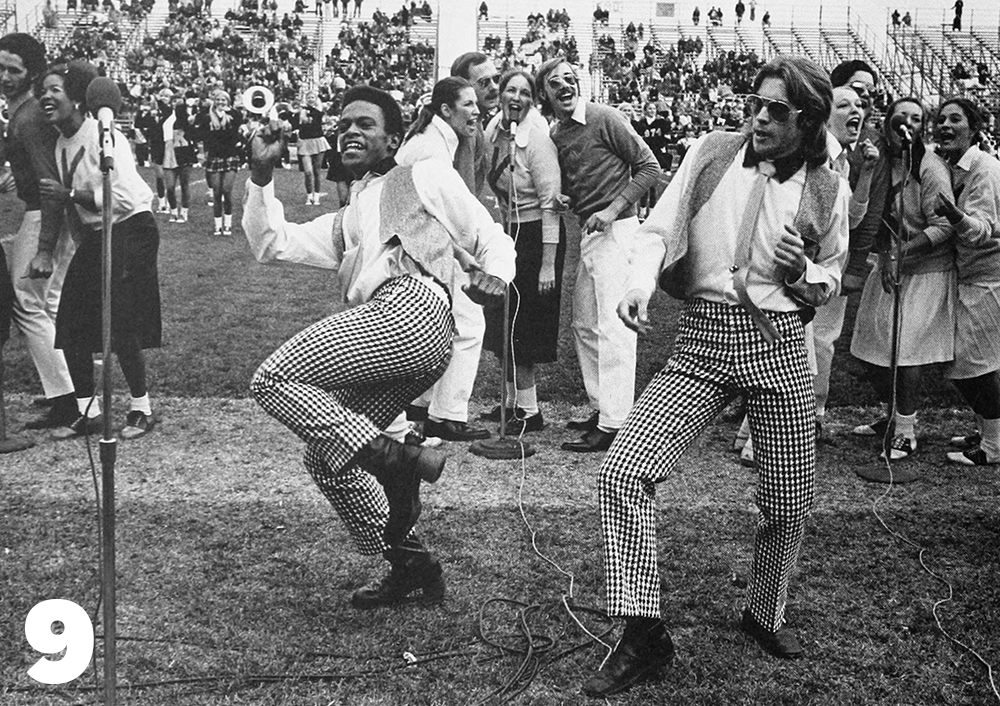 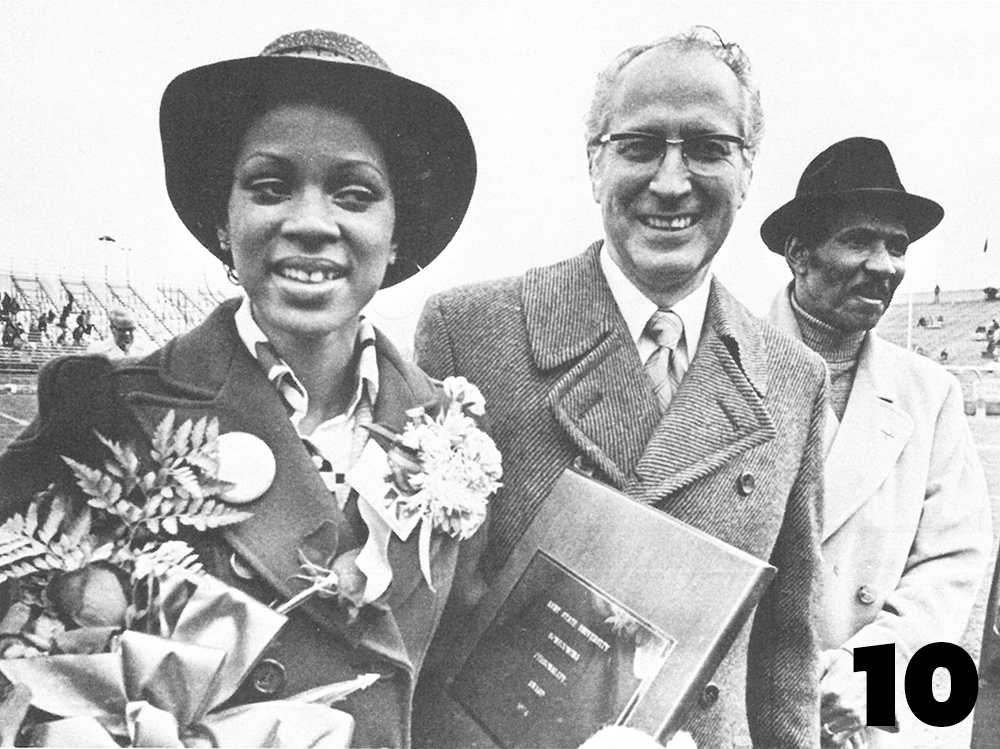 October 19, 1974: Kathy Hill, sponsored by Omega Psi Phi, is crowned KSU’s first African-American Homecoming queen (10)—actually, the first Homecoming “person.” The title changes because prior to the selection of finalists, members of the Kent Women’s Action Collective and the Kent Gay Liberation Front protest the competition as sexist and not representative of KSU. For the first time, the Homecoming court includes a male, Lee Paull.(The Daily Kent Stater, Oct. 17, 1974)

October 7, 1978: After a hiatus of several years, the alumni association revives the election of a Homecoming queen—with the new addition of a king for “equality.” Brenda Paramore, sponsored by Koonce Hall, and William Stone, sponsored by Tau Kappa Epsilon, are crowned at halftime. (The Daily Kent Stater, Oct. 6, 1978; The Chestnut Burr, 1979, pg. 12) 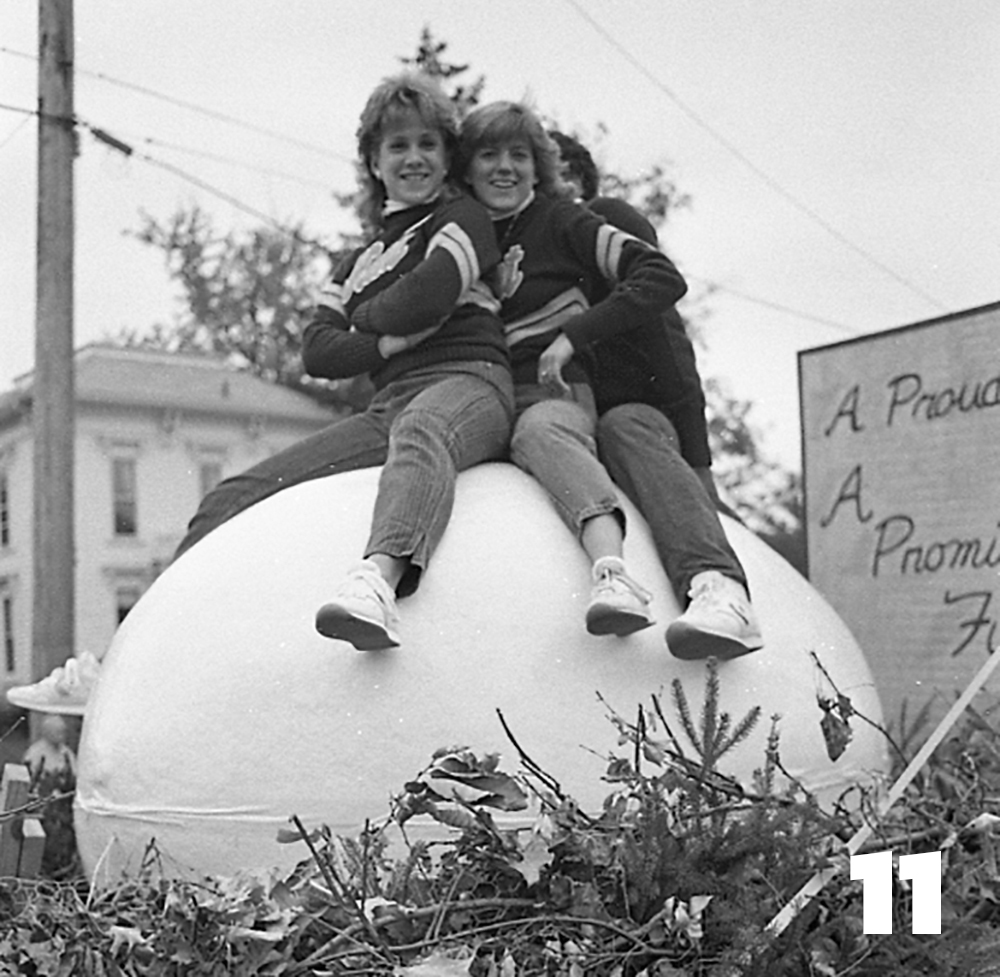 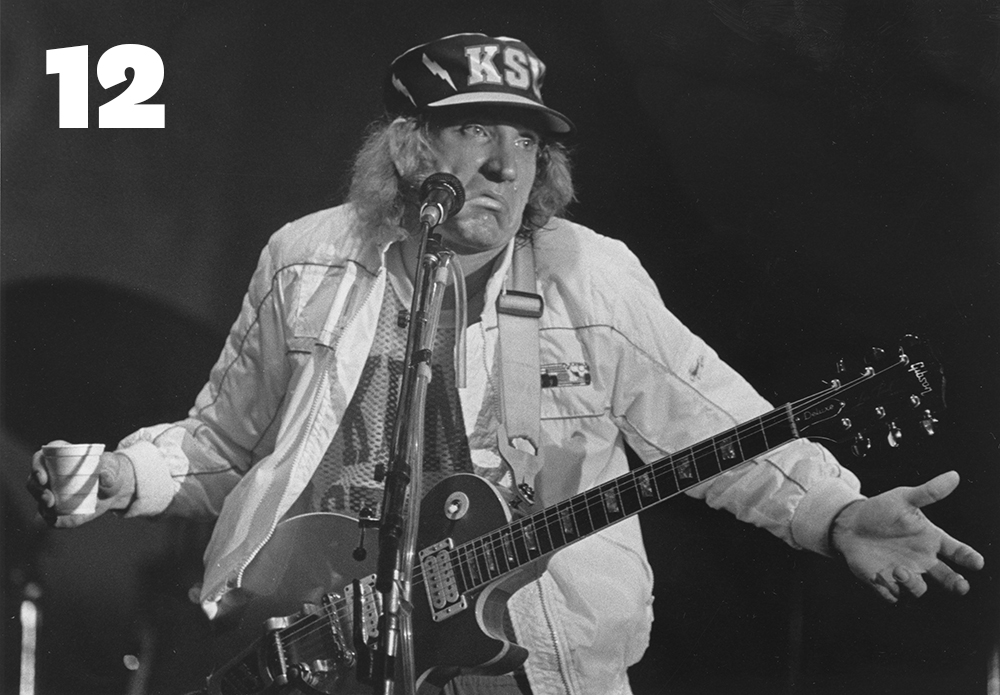 October 4, 1986: Guitarist Joe Walsh (who attended KSU) serves as Parade Grand Marshal. He rocks the National Anthem on his guitar at halftime and later plays to a packed house in the Memorial Gym (12). (The Daily Kent Stater, Oct. 2, 1986; A Book of Memories, pg. 285)

October 6, 1990: KSU celebrates its 80th anniversary with the Homecoming parade theme “Around the World in 80 Years” to celebrate diversity. The Student Alumni Action Board brings back an old tradition—the 2.1-mile Bowman Cup Race is held for the first time in 12 years. (The Daily Kent Stater, Oct. 5 & 9, 1990) 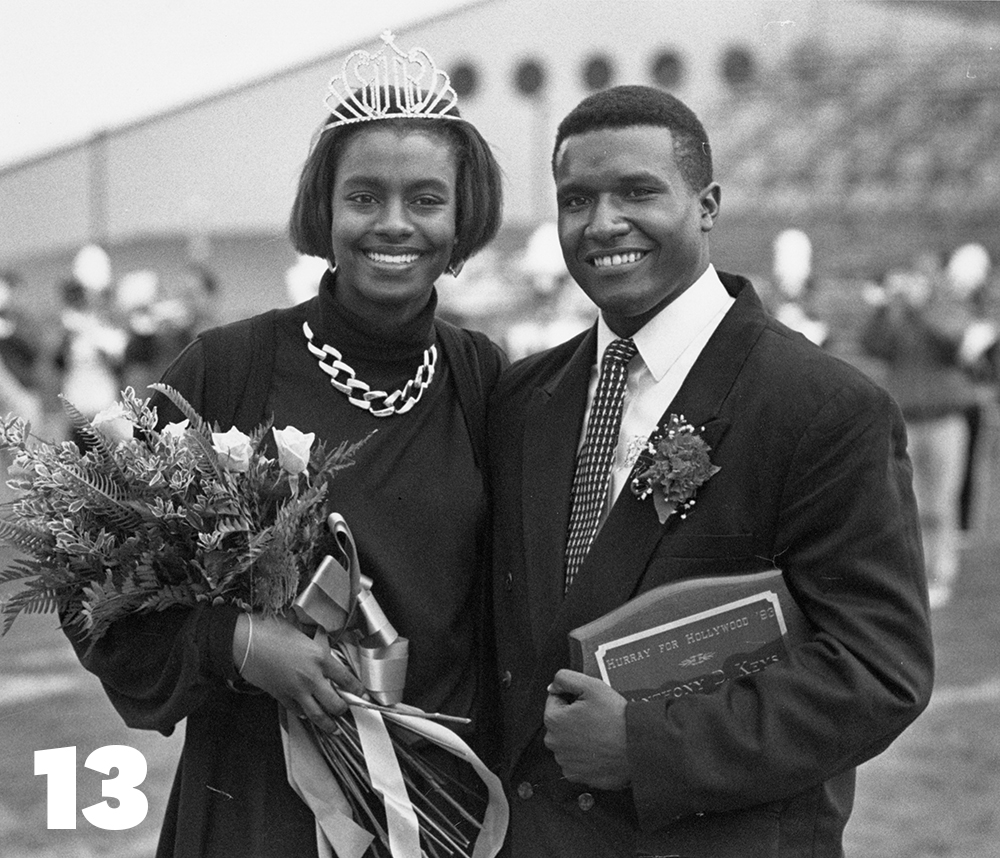 October 2, 1993: For the first time, Kent State students choose a Homecoming queen and king who are both African-American. Nikki Marchmon, sponsored by Black United Students, and Anthony Keys, sponsored by Harambee, are crowned during halftime (13) at the football game (Western Michigan wins 27-21). (The Daily Kent Stater, Oct. 1 & 6, 1993) 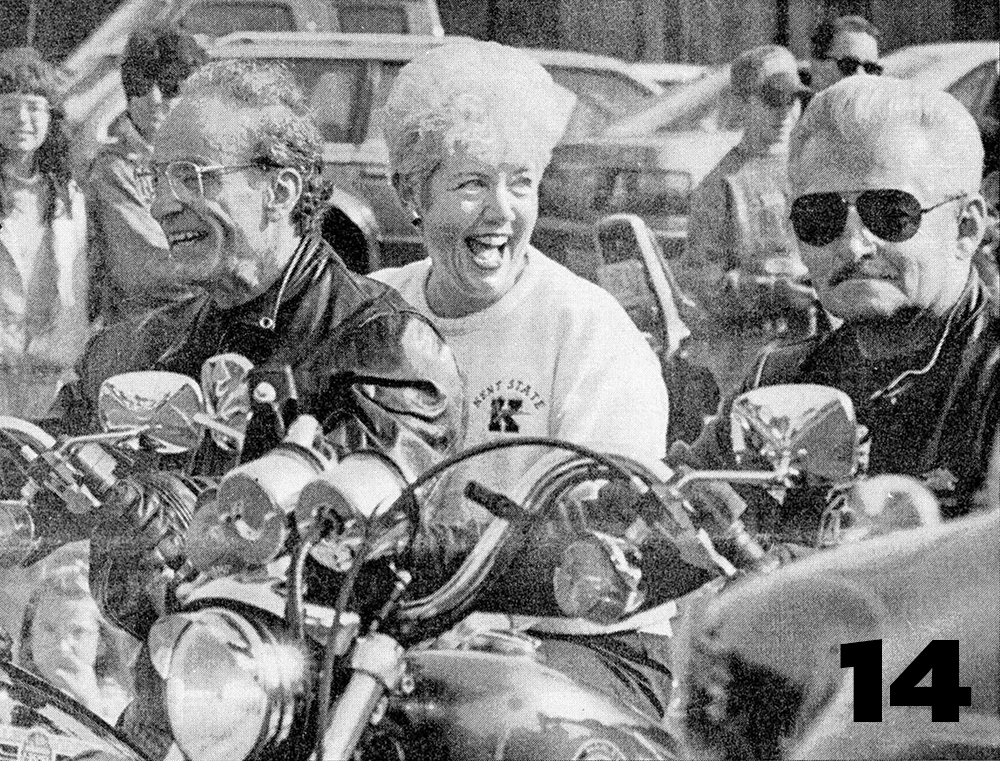 October 8, 1994: All eyes are on President Carol Cartwright (14) as she rides a Harley-Davidson, her chariot of choice for Homecoming parades. (The Daily Kent Stater, Oct. 11, 1994)

October 20, 2001: After 9/11, KSU celebrates hometown heroes during the parade, which includes local firefighters and many floats with a patriotic theme. (The Daily Kent Stater, Oct. 22, 2001)

October 11, 2008: A favorite tradition, the Homecoming parade, returns after an absence of five years. The theme is “Salute to Service” to honor veterans. (The Daily Kent Stater, Oct. 10, 2008) 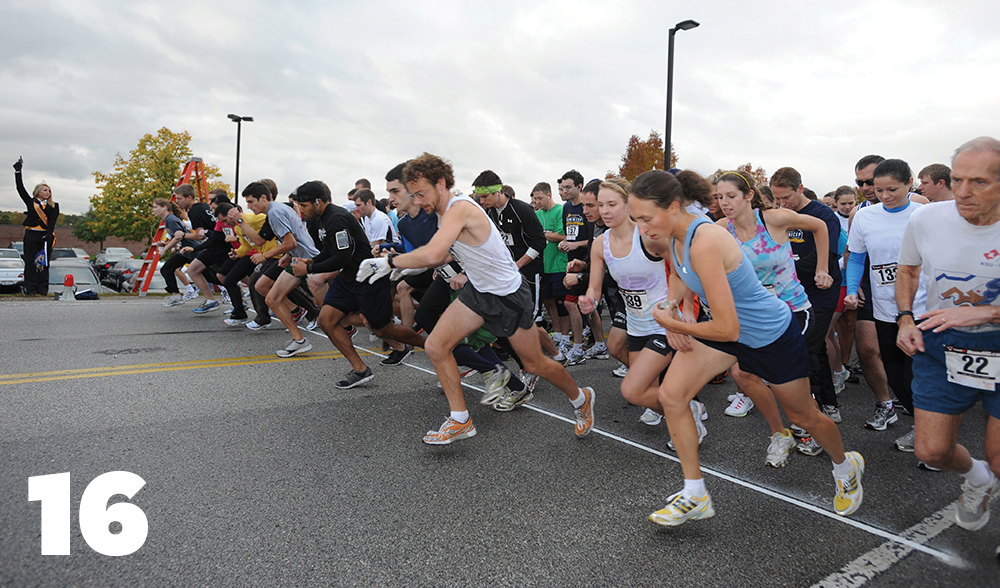 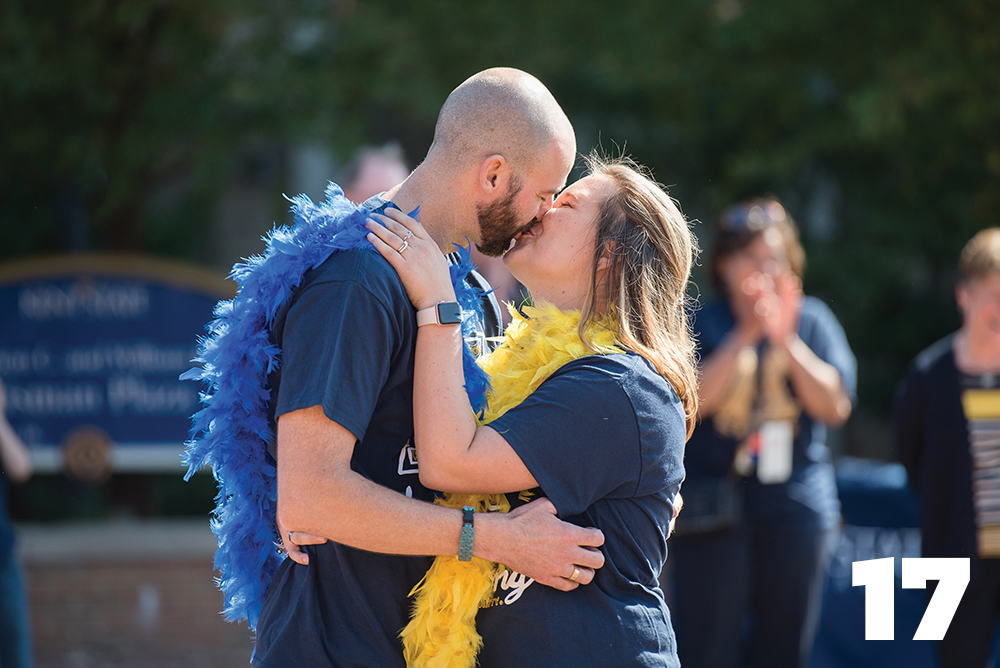 October 15, 2011: The Kent State alumni association starts a new Homecoming tradition, “Kiss on the K,” for couples who met at Kent State to smooch on the K at Risman Plaza when the library bells ring at 12:30 p.m. Named the wildest Homecoming tradition by college web publication The Lala in 2015, it continues to the present (17). 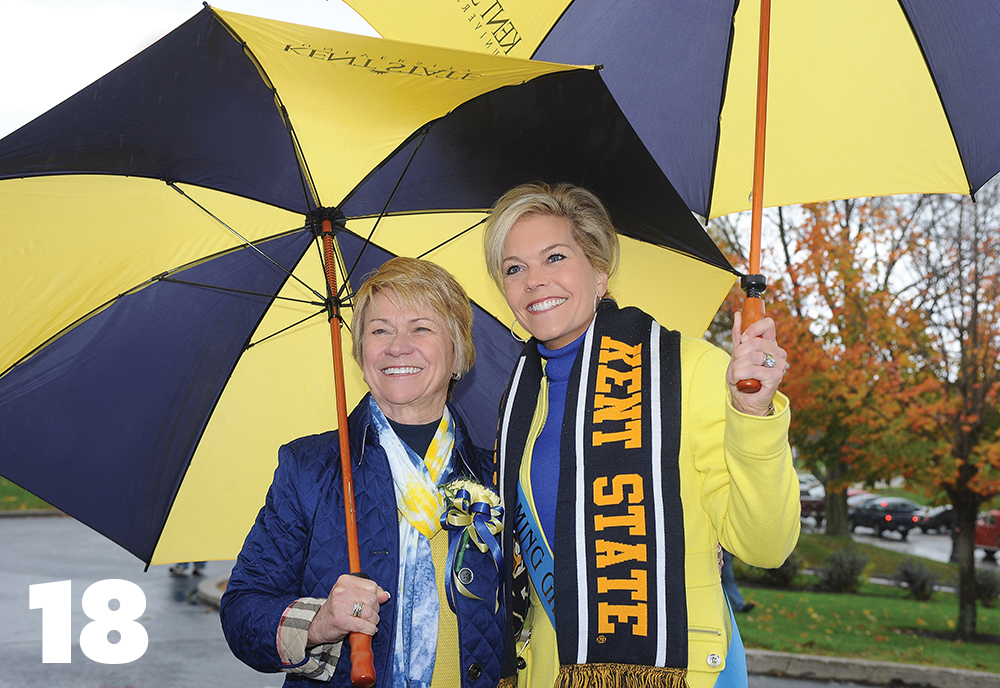 October 1, 2016: The Kent State alumni association hosts a new alumni parade watch location at the Rock and a first Welcome Home Party inviting alumni to their new home at the Center for Philanthropy and Alumni Engagement.