One Kent State short course inspired a high school student’s lifelong love of photography—and was so memorable that he made sure to pay it forward. Now his generous gift gives Kent State students in photojournalism and photo illustration the opportunity to pursue their passions. 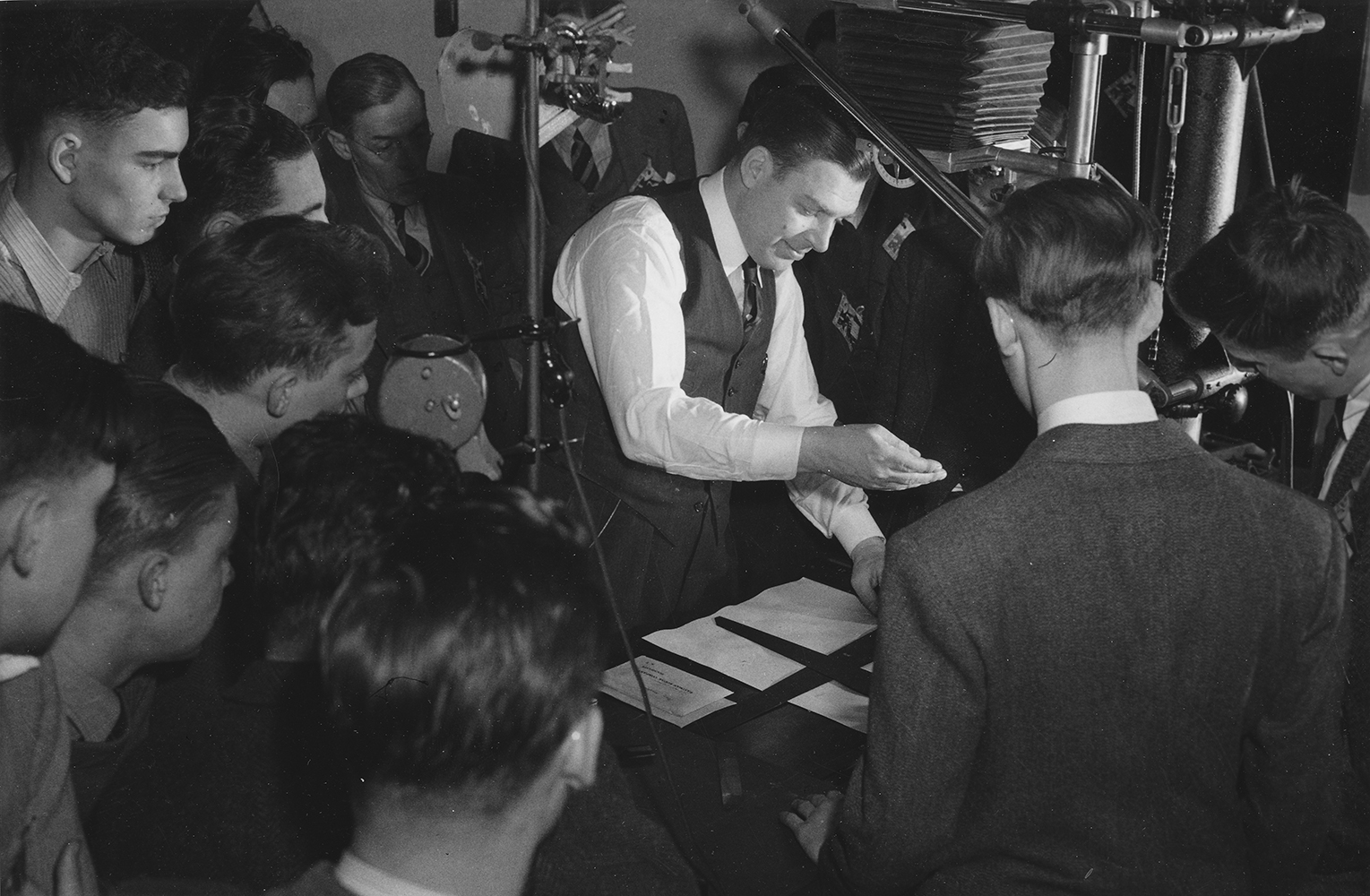 In March 1941, Wally Hagedorn, a tall, lanky 18-year-old from Reading, Ohio, boarded a bus bound for Kent State University, about 235 miles northeast. He and a high school classmate were headed there to attend a five-day course in news and pictorial photography offered by the School of Journalism. It was the first time Hagedorn would travel so far from home.

His mother, Elsie, hadn’t wanted him to go, but she’d relented and driven them to the bus station in Silverton. She knew her eldest child could seldom be stopped when he set his mind on something. As a young boy, he’d sometimes take off on his bicycle after school to visit his grandmother, who lived quite a distance away—without telling his mother. She’d get a call, “Wallace is here, and when he’s done eating, I’ll send him home.” (His family called him Wallace; his friends called him Wally.)

Another time, he’d set off on his bike to visit his great aunt in Celina, Ohio, about 100 miles north. He’d left a note, though, and his mother knew what route he was likely to take. She got in the car, caught up with him about 10 miles away from home and informed him when he’d better be back or else she’d send the police after him.

So Hagedorn was eager for adventure, and when a high school teacher recommended that he and his friend attend Kent State’s Fourth Annual Short Course in News Photography (and may have helped them get a scholarship), he snapped at the chance—like he’d learned to snap a shot with his camera before a propitious moment passed.

Publicity for the course promised that news photographers and photojournalists from the Milwaukee Journal, the New York Daily Mirror, Life, National Geographic, and the Chicago Tribune would be presenting lectures and demonstrations. Their number included a photographer whose work Hagedorn admired in the photography magazines he poured over at home.

A two-day beginner’s session began a day before the regular course. At 9 a.m. on Tuesday, March 18, Hagedorn probably joined other beginners in Room 303 Kent Hall to learn the fundamentals of news photography. The program included demonstrations and opportunities to take pictures, develop film and make prints in the six new darkrooms in the basement.

During their time in Kent, Hagedorn and his friend stayed in the attic of a fraternity house. It was hot and stuffy up there, but he didn’t mind. As a young man from a family of modest means, he felt like he’d won the lottery by getting to travel to Kent State and attend the course.

A year later, a publication of the National Press Photographers Association, which had held their annual meeting at Kent State during the program, referred to it as “what some have chosen to call the finest Short Course in the history of the University.”

It was an experience Hagedorn never forgot and often recalled fondly to family and friends. Although he didn’t enroll at Kent State or pursue news photography as a career, he took thousands of photos as a hobby, using a Kodak point and shoot camera—he didn’t like to lug around a lot of equipment. He joined a camera club, entered and won several photography contests, and his winning photographs appeared in magazines and exhibits.

An outgoing man who enjoyed getting to know people, he’d often snap shots of people who came to visit him; a few days later, they’d receive an envelope containing duplicate prints.

As a high school student, his cost to enroll in the Short Course had been $3.00. And 72 years later, after he died at age 90 on October 21, 2013, Kent State learned that Wallace J. Hagedorn had left the School of Journalism and Mass Communication $3 million.

Where’s Wally? We were unable to positively identify him among the hundreds of participants in the 1941 Short Course who gathered for this class photo, above. But he’s likely there somewhere!

That’s the picture that came into focus as we searched through archival documents about the Short Course and spoke with some of Hagedorn’s family members and friends, who recalled the stories he’d told them about his experience at Kent State and what it had meant to him.

Although their memory of those conversations may be a bit fuzzy, Hagedorn’s bequest makes his wishes clear: his gift will enable the university to distribute approximately $200,000 annually to students studying photojournalism and photo illustration in the schools of Journalism and Mass Communication and Visual Communication Design. Scholarships will be awarded to help offset tuition, room and board and fees, as well as to fund opportunities for students to study abroad, accept internships, travel to workshops or conferences and enter work in competitions.

Two years prior to his death, Hagedorn had contacted then President Lester Lefton and donated $20,000 for two photojournalism scholarships. At the time, he indicated that more might be forthcoming, but nothing else was heard about his plans until after his death. When Thor Wasbotten, director of the School of Journalism and Mass Communication, received a call about the bequest in fall 2014, it came as a surprise: “It marks the largest single gift to Kent State University exclusively for student scholarships.”

As President Beverly Warren notes, “We can never underestimate the impact that Kent State has on people, whether they are graduates or not. Mr. Hagedorn wanted to give back in a meaningful way, and his generous gift to fund scholarships will have a tremendous impact on our students’ lives.”

Hagedorn may have had limited funds and opportunities as a young man, but his gift enables students studying visual storytelling at Kent State to dream big. That’s what the Short Course had done for him: It exposed him to a wider world, showed him he had talent, gave him a vision for what was possible—and heightened his ability to visually capture the meaningful moments in his life.

After Hagedorn graduated from Reading High School, he lived at home and commuted to Miami University, where his high school girlfriend and future wife, Joyce, was studying to be an elementary school teacher.

He joined the ROTC, took courses in botany and horticulture and dreamed of going out west to become a forest ranger. (He helped with his father’s sod business during summers, and plants had become another of his passions.) His mother waitressed to help with his tuition, and he worked at a restaurant to earn extra money. But money was tight.

Sometimes one of his parents drove him to Oxford; most of the time he hitchhiked, as did many students in those days. One of his professors noticed him hitchhiking and started giving him rides. Then somebody got him a job washing out beakers in a lab to help him earn enough money to stay in school. (Hagedorn never forgot the assistance he’d been given, and he and his wife established scholarships at Miami University for students studying elementary education and botany.)

Hagedorn had attended college for one semester when America entered World War II in December 1941, after the Japanese attack on Pearl Harbor. Called up for active duty, he joined the Marines and trained at Camp Lejeune as a Second Lieutenant. Before he could be sent to the battlefield, he came down with spinal meningitis and spent almost 10 months in the hospital. Soon after his release from the hospital, he received a medical discharge.

Hagedorn did landscape work for wealthy families in the area and took night classes in horticulture at the University of Cincinnati. Joyce would go with him to class—not to help him study, he joked, but to keep him from flirting with all the other girls.

After she graduated from college in 1945, they married and settled in Cincinnati. They didn’t have children. His wife taught third grade at Reading Central Community school for 42 years, and Hagedorn developed his landscaping and nursery business.

Both enjoyed Thoroughbred racehorses, and often traveled to the Keeneland Racecourse in Lexington, Kentucky, for meets. They would place bets of $2 or less, and they never lost more than a few dollars, but they thought that was extravagant.

Always frugal—they shopped at Goodwill for clothes and didn’t buy a home until 1992—Hagedorn saved his money to buy land and stock in companies that his wealthy clients worked for or recommended.

Instead of relying on financial experts, he said he got his investment tips from watching people and noticing what they were interested in—even chatting up people at the grocery store to find out what they liked about the type of coffee they were buying.

Hagedorn chose his land well, starting his nursery in Springdale, a northern suburb of Cincinnati. He later sold it to the developers of a $25 million regional project, originally known as Tri-County Shopping Center, which broke ground in 1959, was fully enclosed by 1968 and expanded again between 1989 and 1992. Hagedorn moved his nursery whenever the land it was on proved to be more profitable than the plants he was growing on it.

Through the years, though, photography remained both a passion and a pastime, spurring his travels with his wife to all 50 states and many countries around the world.

Near the end of his life, when asked if he would have done anything differently, Hagedorn said he was happy with most things and didn’t believe in regrets—but sometimes he did wonder what would have happened if he’d made photography his career.

This photo, titled “Brotherly Love,” is from a slide taken by Wallace Hagedorn on a trip to Nepal. According to family members, it won a cash award in a contest sponsored by Kodak, was published in a national magazine, and was exhibited in a museum in California. It’s one of thousands of slides that Hagedorn took during his travels around the world. Several of his amateur photos won awards and were published in magazines. (Photo courtesy Michael Minges)

This year, 27 photojournalism and photo illustration students received scholarships averaging $5,000 each, for a total disbursement of approximately $200,000. Funds also will be invested in student activities such as travel abroad, study away, contests, workshops and internships.

To explore how your bequest can make a difference in the lives of students, please contact the Center for Gift and Estate Planning at 330-672-0421 or giftplan@kent.edu.