State-of-the-art classrooms, computer labs, student lounges, centralized student advising and a gallery are just a few of the upgrades in the newly renovated Taylor Hall, which originally opened in 1967 and marked its “grand reopening” in September 2017.

The $9 million, 60,000-square-foot renovation brings together two schools from the College of Communication and Information (CCI)—Communication Studies and Visual Communication Design—and creates expanded space for the May 4 Visitor’s Center. (The School of Digital Sciences is also housed in the building for one year while its permanent home in the University Library is under construction.) On the ground floor, a large, windowed gallery space (see photo above) greets visitors in the lobby of Taylor Hall’s main entrance. Directly across from the gallery is a large auditorium that doubles as a classroom or space for special events.

Visual Communication Design moved from its longtime location in the Art Building to Taylor Hall’s fourth floor, once home to the School of Architecture, where floor-to-ceiling windows invite natural light into the open classroom spaces. Communication Studies maintains its location in historic Taylor Hall, which once housed the offices of The Daily Kent Stater.

Both schools rely heavily on online coursework, and shared rooms with technology dedicated to ongoing distance education allow them to combine resources and create distance learning classrooms for the designing, taping and streaming of online content.

The Taylor Hall renovation also gave the May 4 Visitor’s Center—which opened in fall 2012 and was formally dedicated in May 2013—more offices, as well as the Reflections Gallery, a classroom and exhibit space that can accommodate tour groups.

“This project is not just important to the college, but also to the campus,” says CCI Dean Amy Reynolds, PhD. “Taylor Hall sits at the heart of the university, and it represents the importance Kent State places on the values of civil discourse and freedom of expression—concepts that are central to our college as well.”
—Susan Menassa 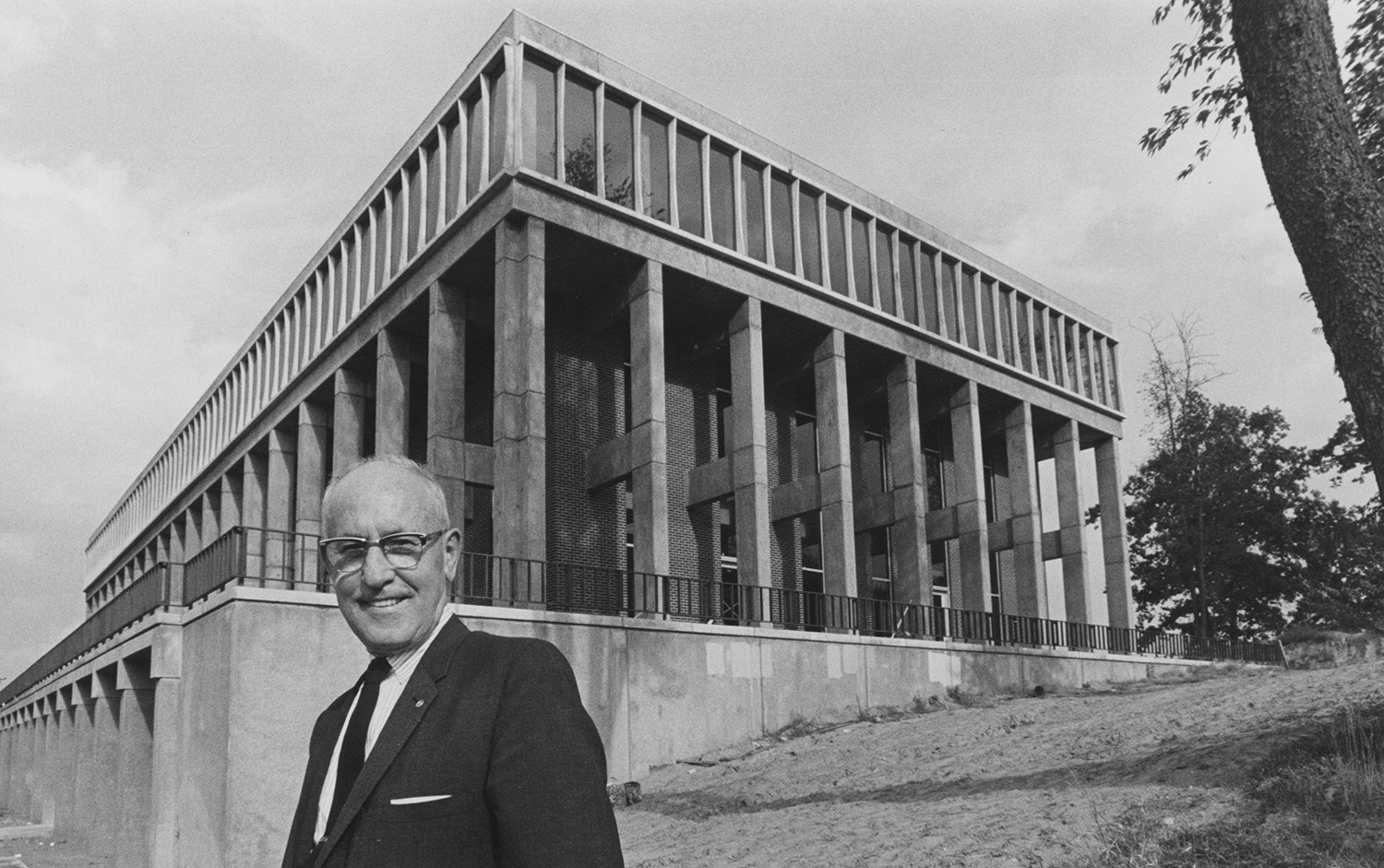 When word got out in early 1967 that a newly constructed campus building would be named for the School of Journalism’s long-serving department chair and professor William Taylor, the building’s namesake never saw it coming.

Responding to a letter of congratulations, the modest Taylor wrote, “I was the most surprised guy in Ohio when I was told that building would bear my name. It’s more than anyone could merit. I feel like it has happened to someone else.”

Naming a building for a professor about to retire was something new at that time for Kent State; the honor typically went to university presidents or members of the Board of Trustees.

The gesture spoke volumes about Taylor’s influence, importance and contribution, which began when he first set foot on the Kent State campus in 1933 as professor to teach in the fledgling journalism department. By 1936, the department became the School of Journalism and Taylor took the helm as its chair, a position he held until 1963—with three years away to serve in the Army during World War II. He was named Professor Emeritus in 1968, and served on the Board of Trustees from 1970 until his death in 1975.

Taylor, a former newspaper reporter, was charismatic and well-liked by Kent State students. He helped grow enrollment in the journalism program by including the specialty of public relations, a profession he had once worked in himself before coming to Kent State.

In just three short years after its opening, Taylor Hall would be forever linked to the tragic events of May 4, 1970. But on the day of its April 1967 dedication, the Kent State Choir sang, the Cleveland Symphony played, Ohio politicians arrived and alumni traveled from around the country to honor Taylor and tour the halls of the $1.4 million, state-of-the-art building that became home to the School of Journalism and the Department of Architecture.

Taylor’s legacy also lives on through the William D. Taylor Award, established by the university in 1957 and given to alumni of its Journalism and Mass Communication (JMC) program every year since. Recipients of the prestigious award include Pulitzer Prize-winning journalist and JMC professor Connie Schultz, Chicago Tribune reporter Sam Roe, and photographer John Filo, who won the Pulitzer Prize in 1970 for the iconic Newsweek cover photograph of Mary Ann Vecchio crying out over the body of May 4 victim Jeffrey Miller.

Back to Flash Forward Winter 2018