In recent summers, blooms of toxic algae have formed a mucky blanket on some Ohio lakes, killing fish and making swimming unsafe. But for several days in August 2014, these so-called blue-green algae, known technically as cyanobacteria, made national news by crippling the public water supply serving the Toledo area.

Strong winds blew the harmful algae blooms (called HABs for short) against Lake Erie’s shore, surrounding the region’s water intake system. And neurotoxins (in this case, microcystins) released by the organisms entered the intakes in high enough amounts to sound an alarm.

Don’t drink—or even cook with—the water from your faucet, authorities warned nearly half a million nearby residents in Ohio and Michigan. Ingesting the tainted water could cause vomiting, diarrhea, skin irritation and even liver damage in humans and animals. Boiling the water only made it more toxic. As people scrambled to buy bottled water, which quickly sold out in stores for miles around, the National Guard was called in to deliver extra supplies.

Could something similar happen this summer?

It’s not time to hit the panic button, says Joseph D. Ortiz, Ph.D., a geology professor at Kent State University’s College of Arts and Sciences who specializes in aquatic biology and oceanography. Ortiz and his colleagues are among a group of researchers who have been developing methods to better predict future harmful algae blooms.

“Maybe something good has come out of the problem in Toledo last summer,” says Ortiz, whose research has taken on a new sense of urgency. “We’ve been galvanized to improve the situation.”

With funds and support from the Ohio Sea Grant, the Ohio Board of Regents and NASA, Ortiz is honing methods for spotting a harmful algae bloom, preferably before it gets too large or too close to shore. The goals include minimizing harm to fish, keeping beaches open to swimmers, and alerting communities with water intakes nearby so they can take steps to defend their water supply (such as closing the intakes and stepping up the rate at which they’re treating the water). Ortiz has been examining crucial questions such as: What types of organisms are in the water? How extensive are they? Where are they and in which direction are they moving?

To advance the understanding of how algae blooms* develop and thrive, Ortiz is putting a space-age spin on long-standing research methods. Traditionally, scientists have plodded along by boat, collecting samples for analysis a single spot at a time. “My focus is on trying to identify these organisms in a rapid and remote way,” Ortiz says.

He is developing a remote sensing technology that relies on pictures taken with an instrument aboard NASA’s International Space Station called a hyperspectral imager. The high-resolution pictures—decoded with the help of elaborate computer programs that Ortiz’s group is continually refining—allow Ortiz to identify plant pigments by the distinctive way each absorbs and reflects light. This “pigment fingerprint” makes it possible to classify organisms and determine which ones are harmful, and which ones are benign or even beneficial to the ecosystem.

Among Ortiz's Kent State partners in this mission is microbial ecologist Xiaozhen (Jen) Mou, Ph.D., an associate professor of biological sciences who studies cyanobacterial blooms at the gene level. Says Mou, whose research has helped ensure the accuracy of Ortiz’s method of converting space data to identify HABs in the water, “Together our findings will help establish a more comprehensive view of the ecology and biology of HABs.”

This summer Ortiz is also joining forces with additional experts from Kent State and three other universities on a HAB study in Sandusky Bay. As part of a $2 million Lake Erie water quality program requested by Ohio Governor John Kasich and created by the Ohio Board of Regents, the Kent State group is helping develop an early warning system for water filtration plants.

Ortiz’s specialized knowledge of remote sensing is key to the project, according to George Bullerjahn, Ph.D., a professor of biological sciences at Bowling Green State University and the study’s principal investigator. While Bullerjahn’s team measures chlorophyll, toxins and nutrients the conventional way, from the ground, Ortiz will contribute the hyperspectral imager’s cosmic perspective. Says Bullerjahn: “Joe’s angle is ‘How can we map the movement of this bloom from space so we can tell water treatment plants in advance when to take appropriate measures to treat the water?’”

Ortiz—who grew up on the East Coast, got his doctorate in oceanography from Oregon State University and has taught at Kent State since 2001—has conducted much of his research on Lake Erie, which he has adopted as his “personal mini ocean.” As he points out, the Great Lakes are important sources of fresh water, accounting for about 20 percent of the world’s supply. Lake Erie is the smallest of the Great Lakes, and it’s also surrounded by more agriculture and human activity than the others, which contributes to the harmful algae blooms, Ortiz says.

But HABs are by no means limited to Lake Erie, the Great Lakes or the state of Ohio. They have turned up in bodies of water around the globe, including Europe and China.

“At a recent conference I attended, they were talking about Lake Taihu in China, which has blooms so intense that scientists estimate they need to cut the nutrient influx by about 90 percent to turn off the bloom conditions,” Ortiz says. “That’s twice as bad as what we’re looking at.”

Communities are taking steps to prevent nutrients such as phosphorus and nitrogen, common in many fertilizers, from getting into lakes, ponds and rivers where they are known to nourish the algae blooms. “For example, the Ohio legislature recently passed a bill to outlaw the spreading of fertilizer or manure during the winter, before the spring thaw, which will help decrease farm runoff,” Ortiz says. “Farmers are learning better practices, which helps them, too, because they want to fertilize their fields, not the lake.”

This summer’s Sandusky Bay project will help Ortiz put into practice his previous research. “We’ve developed the basics of the methodology,” he says. “Now it’s time to start rolling it out.” Ortiz enjoys the complex science, but says the tangible promise of preserving local water supplies—and ultimately contributing to water safety improvements the world over—will be his best reward.

*What Creates an algae bloom?

Algae blooms aren’t a new phenomenon—these ancient organisms have been around for 3.8 billion years, says Ortiz. Although not all algae blooms are harmful, scientists still don’t know why some produce high levels of toxins. “Cyanobacteria are particularly toxic to multicellular life, yet there was no multicellular life when they first evolved,” notes Ortiz. He says the organisms are proliferating now due to an influx of nitrogen and phosphorus being pumped into rivers and lakes—and the blooms may become even more prevalent as the climate warms.

“In the 1950s and ’60s, we introduced high levels of nitrogen by dumping raw sewage into Lake Erie, saying ‘Dilution is the solution to pollution,’” Ortiz says. “That didn’t work so well.” Algae blooms, fish kills and industrial waste contaminated the lake and nearby rivers.

Over the next two decades, the United States spent $8 billion to improve wastewater treatment, and states and communities passed laws to reduce the levels of minerals that nourish the algae. The measures were successful in restoring the health of Lake Erie by the ’90s, but recently the blooms have returned, largely as a result of agricultural runoff.

“Sometimes when you fix one problem, you create another,” Ortiz says. “In trying to fix soil erosion, farmers were urged to go with low-till or no-till agricultural practices. But because they changed the way in which they applied the fertilizer, it would sit on the surface and be more apt to run off. That’s a big reason we’re having these gigantic blooms now.”

As harmful algae blooms burgeon in Lake Erie and other bodies of water around the world, Kent State researchers are developing methods to monitor the situation and make sure our drinking water remains safe. 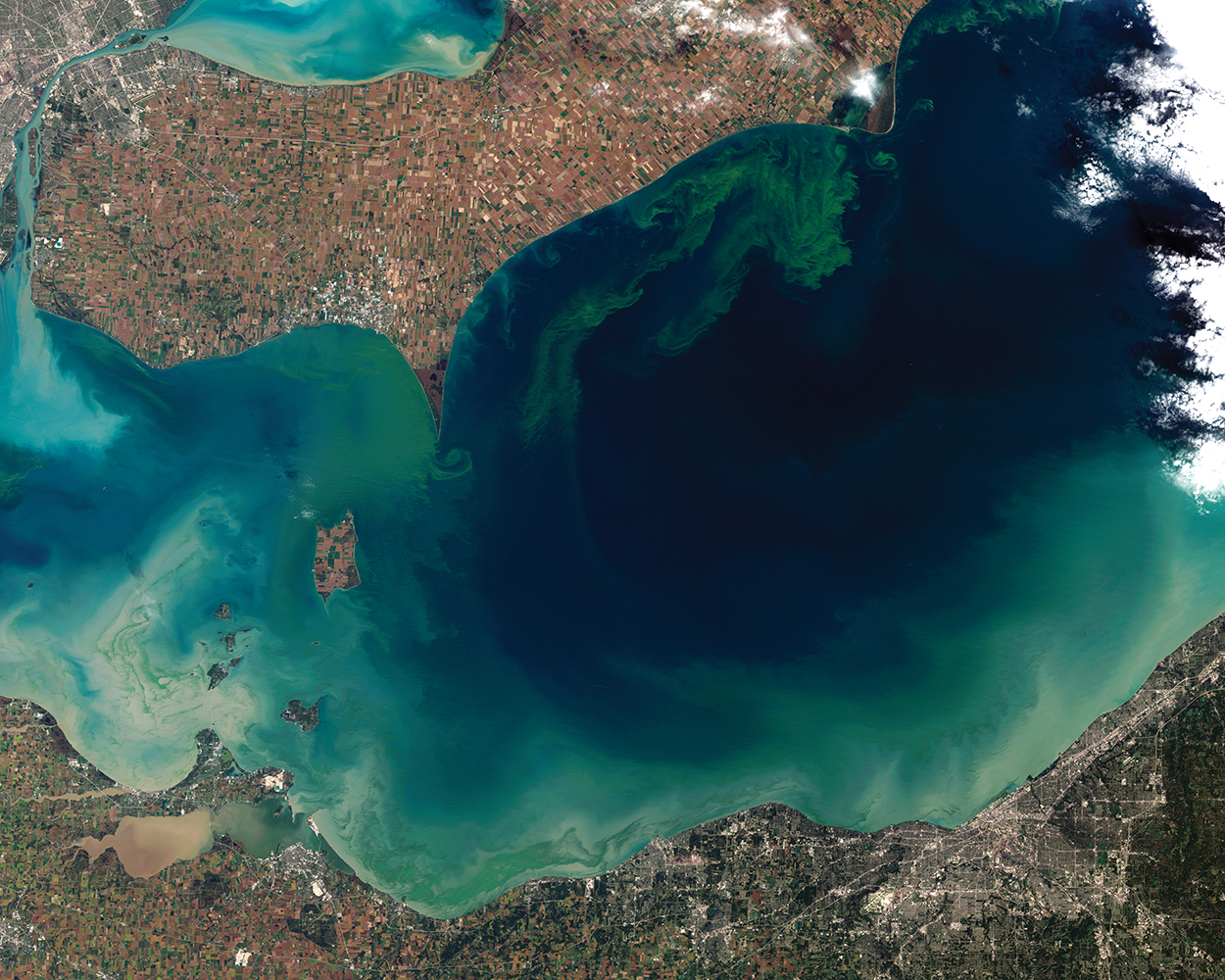 A Landsat-5 image acquired on October 5, 2011 (near the end of the most extensive harmful algae bloom season to hit Lake Erie in decades) shows the complexity of the water in the Western Basin and Sandusky Bay. The various colors arise from mixtures of different types of algae and cyanobacteria, suspended sediment and decaying plant material. Courtesy NASA Earth Observatory.
Kent State Magazine