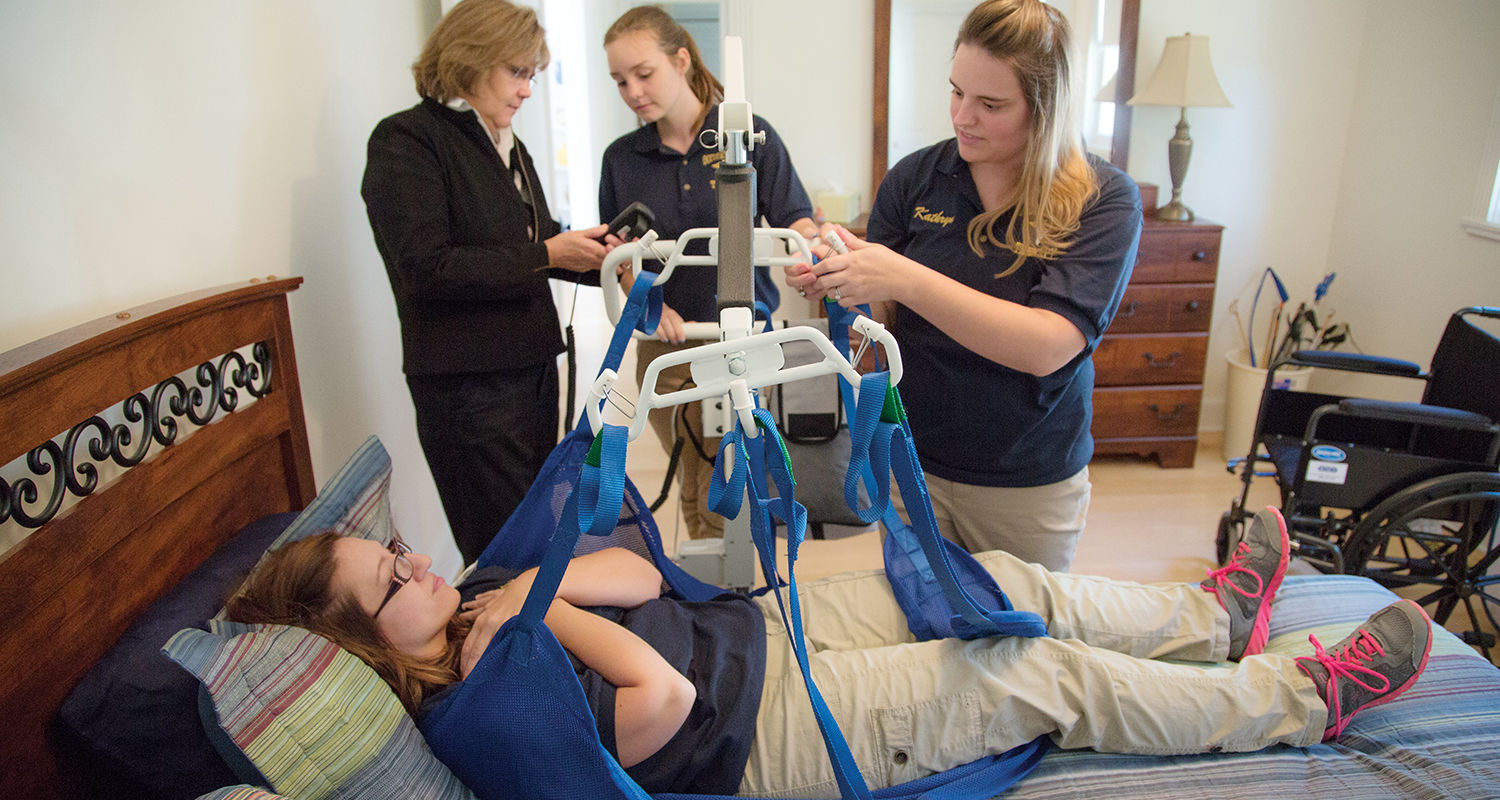 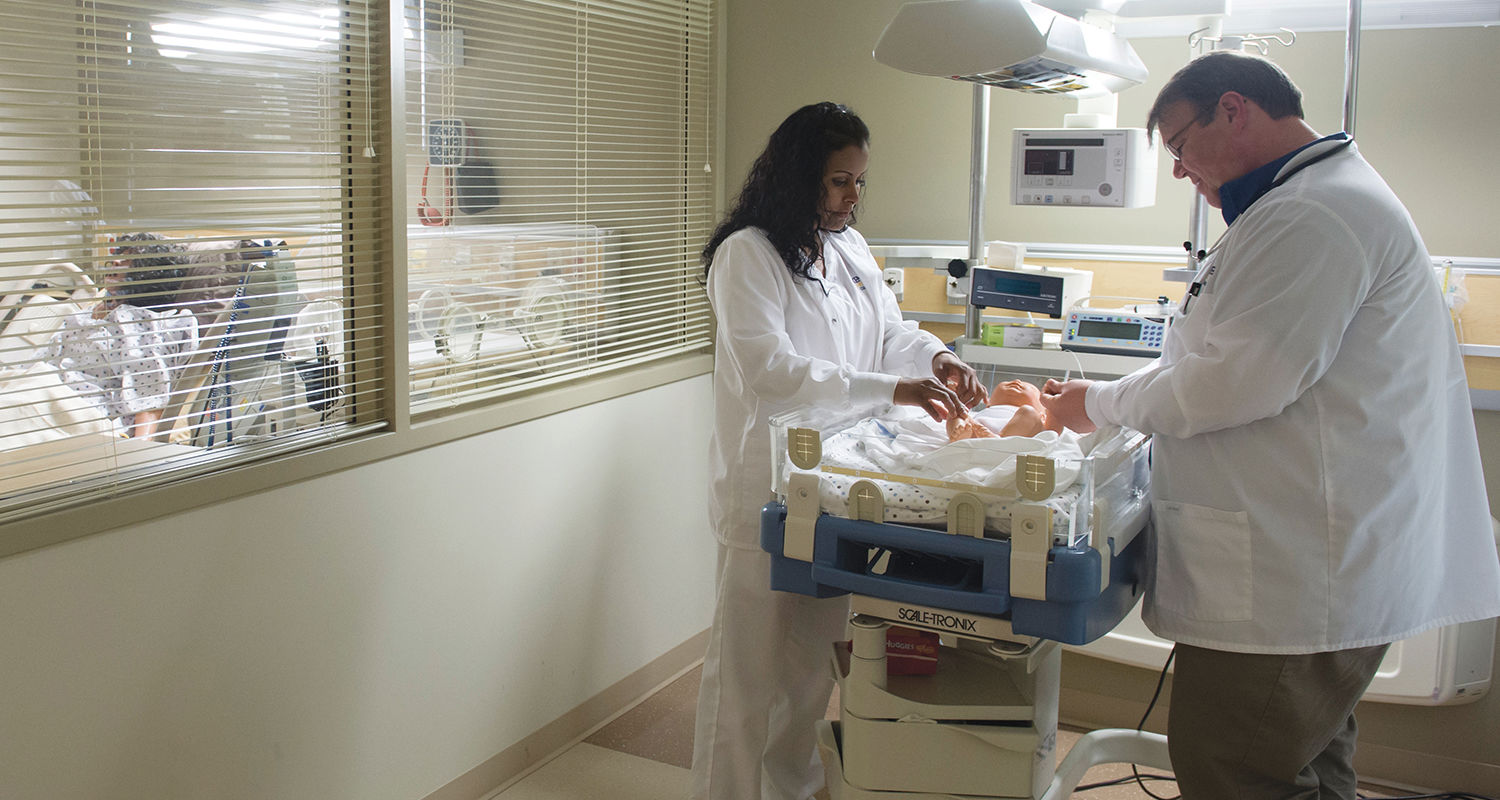 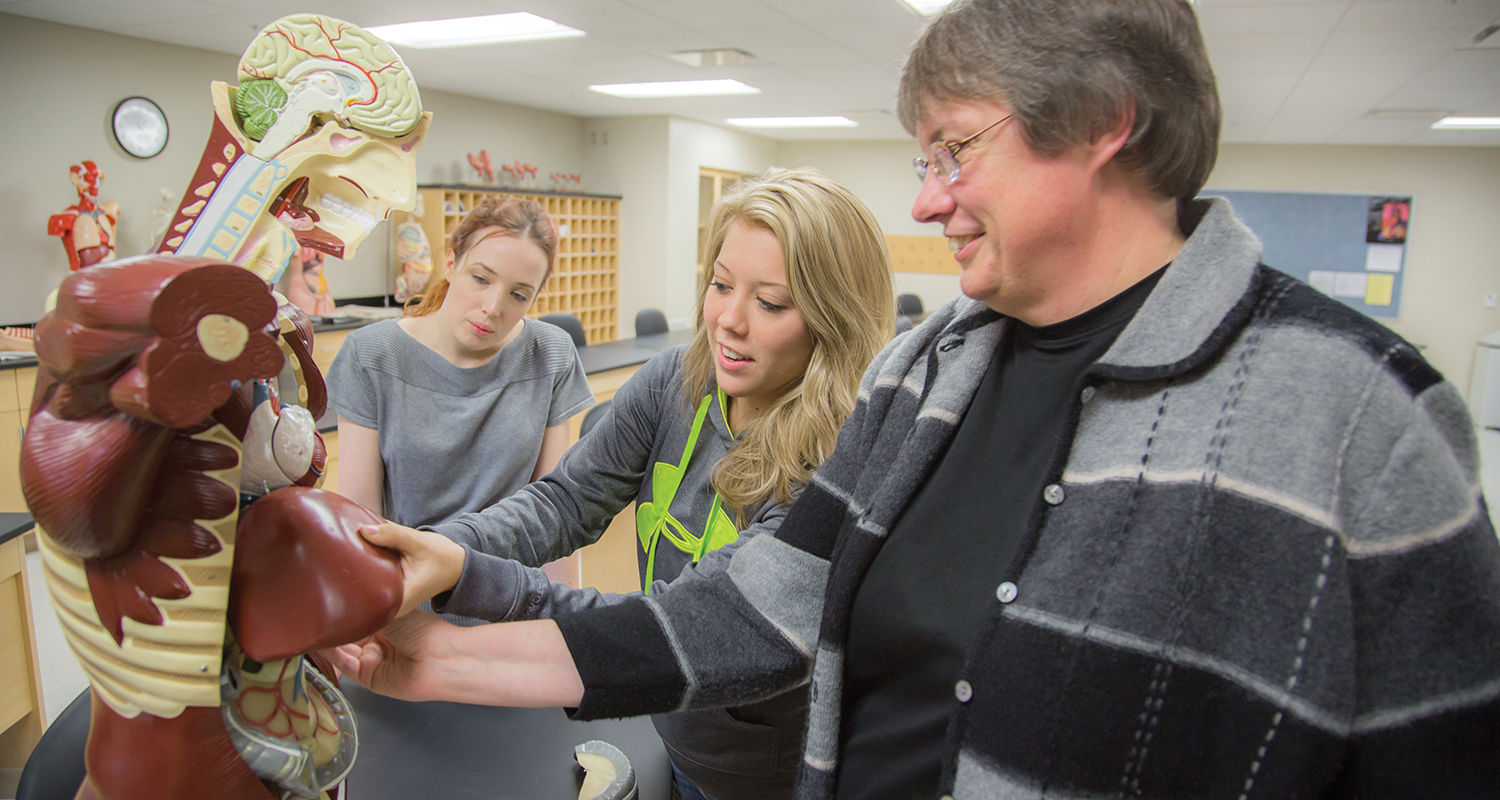 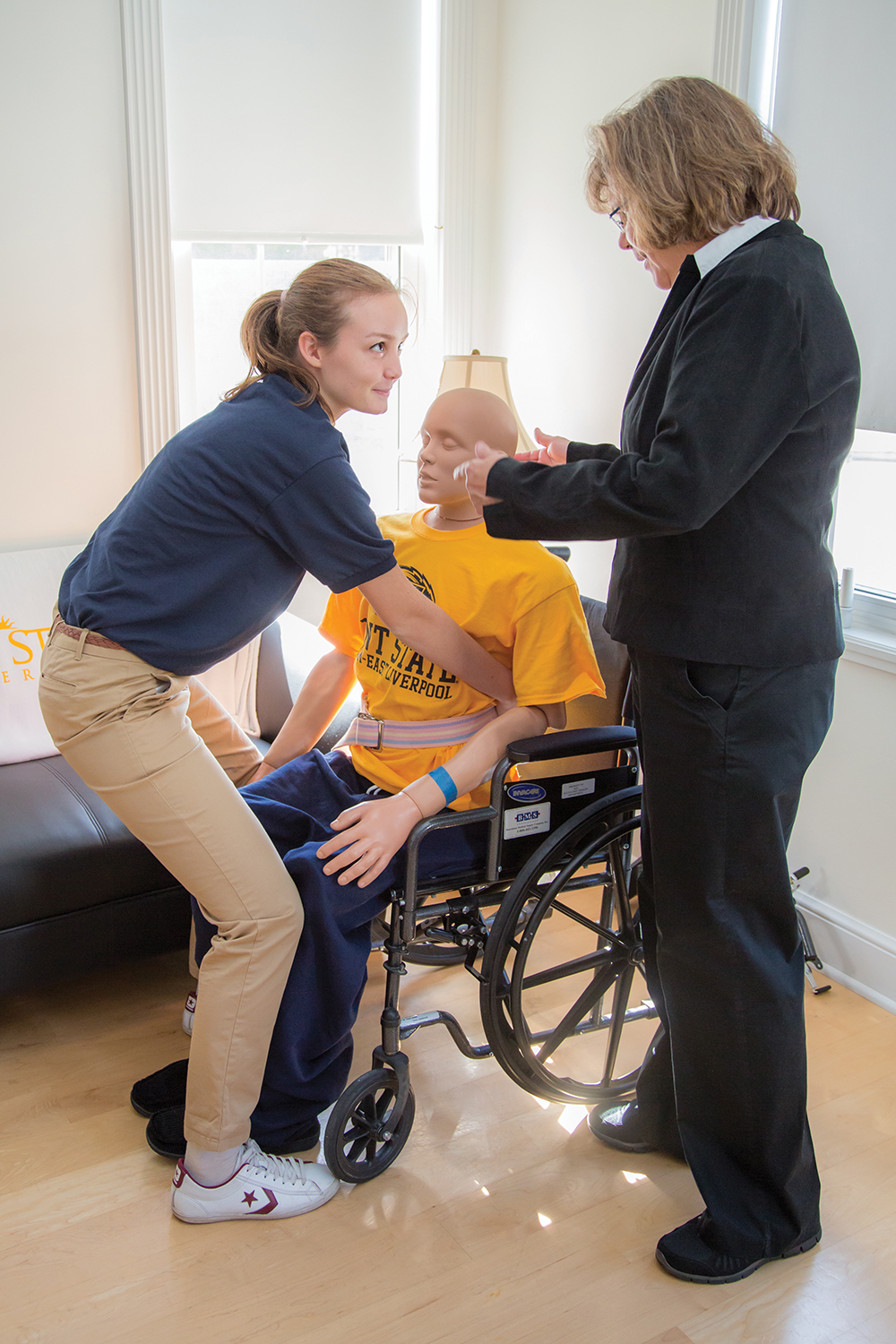 Harriett Bynum, program director of the Occupational Therapy Assistant program at Kent State University at East Liverpool, stands in the kitchen of the recently renovated Locke House—home to the program’s learning laboratory—observing her first-year students in action. The first class to train in the new facility, the students are practicing how to prepare patients with physical challenges to function as independently as possible in their homes.

The room appears to be an average kitchen, but a closer look into cupboards and drawers reveals specially adapted plates, bowls, cups and utensils, such as a weighted swivel spoon that helps people with hand tremors eat without spilling food.

“We no longer have to simulate home situations in our classrooms,” says Bynum. “Now we have an actual house where students get real hands-on experience.”

Located in historic downtown East Liverpool, the home previously belonged to James and Margaret Locke, who owned a nearby jewelry store for 45 years and were generous supporters of Kent State East Liverpool. After they died, their two sons, James and Keith, donated the home to the university.

Today the home’s main resident is a 55-pound medical mannequin named Randy, which students use to practice basic techniques such as bathing, dressing and transferring between wheelchair and bed. The program is occupation based—using everyday activities a person will complete as the means for training occupational therapy assistants.

Says Bynum, “We can say to students, ‘Here’s the house, here’s your patient, here’s your scenario—what are you going to do with them?’” —Lauren Rathmell ’17 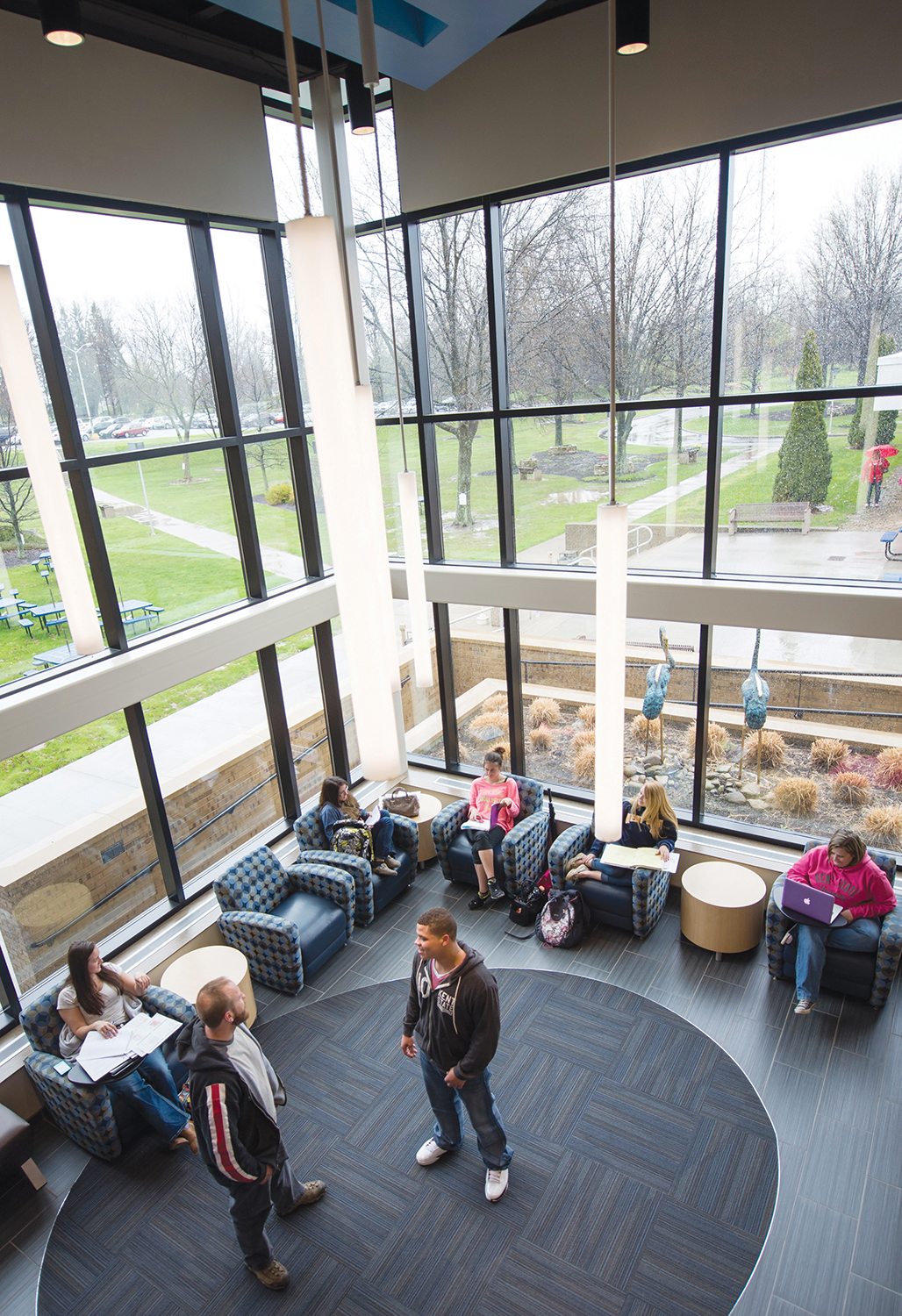 What was once an underutilized gymnasium at Kent State University at Salem has been transformed into a state-of-the-art health and sciences wing, now known as Centofanti Hall.

The first-floor renovation (including more than 16,000 square feet of classroom and lab space, as well as new offices and a bookstore) was completed in September 2011.

But the second floor remained unfinished until a generous donation from the James and Coralie Centofanti Foundation helped convert the 9,000 square-foot shell into hands-on laboratories for biology and chemistry, classrooms for science-related studies, two research rooms and two prep rooms, as well as restrooms—all completed in September 2015.

Before Centofanti Hall’s completion, faculty members at Kent State Salem had to conduct research at the Kent Campus; now they have their own space for research. Students and faculty also enjoy new labs that have windows and are twice as large as the old, with plenty of space for models and equipment.

Louise Steele, assistant professor of biological sciences, says a committee of biology and chemistry faculty members worked with staff from the Office of the University Architect to make sure each room’s layout and furnishings met everyone’s needs.

“In the biology lab, we angled the tables so everyone could face the center where we lecture and hold demonstrations,” says Steele. “And we have special projectors, TV screens and speakers, so if we show a video everyone can see and hear it better.”

The chemistry lab seats more than twice as many students as the old, and it has updated safety equipment‚ including a new eyewash station, safety shower and four vented fume hoods for working with smelly or dangerous chemicals.

“This expanded space and access to the latest technology makes a tremendous difference,” says Steele. “Most of the students here are in health majors and take biology and chemistry. They needed this.” —Lauren Rathmell ’17

To explore how your gift can make an impact on Kent State students, contact Matt Butts, executive director of advancement, at 330-672-1435 or mbutts@kent.edu.