Bill Finley, BS ’70, Kent, Ohio, wrote: “I, along with my two sons, Jon and Peter, started a business in Kent called Lucci’s Place in June 2015. Thanks to the pizza gods, we have been extremely fortunate in this wonderful college town. The Kent Stater voted Lucci’s number one pizza in May 2017; prior to that we were recognized as number one pizza in Portage County by the Cleveland Plain Dealer. When the boys were small, I used to tell them what to do; now they tell me what to do. It’s been fun!

Dale Barber, MEd ’71, Sandusky, Mich., has been appointed pastor of the Shabbona and Minden City United Methodist Churches in Michigan.

Ken Burgess, BA ’71, Brenham, Texas, wrote: “I implemented a successful alcohol/drug intervention program for Ural Steel, Novotroitsk, Russian Federation, while working as a consultant for Chestnut Global Partners, Bloomington, Ill. Ural Steel is one of the largest heavy industries in the Lower Siberian region of Russia. The program’s positive research results were recognized and published by the University of Southern California in their Journal of Workplace Behavioral Health (2015), and also appear in the University of Maryland School of Social Work Research Archives, April 2017.”

Harry Dempsey, BS ’71, Stanwood, Mich., wrote: “Although I retired from teaching music last year after 39 years at Ferris State University, I was brought back in January to serve as director of operations for the Department of Humanities. Evidently I flunked at retirement. I plan to try it again sometime within the next year.”

Dorothy Murray, BS ’71, Mogadore, Ohio, wrote: “I was one of 29 students chosen to attend the English-speaking Pahlavi University in Shiraz, Iran, for five months in 1970. Dr. Abbas Amirie, a political science professor at KSU at that time and an Iranian by birth, accompanied us along with his family. While taking classes at the university, we also traveled extensively throughout Iran and gained an appreciation for that country’s rich and varied culture. Because of that trip, the ‘travel bug’ bit me. I have visited all 50 states, 30-plus countries, six continents, and I still have a lengthy bucket list. I will always be indebted to KSU and that unique opportunity for my continued love of travel.”

Robert Rosenfeld, BS ’71, Solon, Ohio, was elected to the Board of Trustees of The Emily Jerry Foundation for Medication Safety (of Chagrin Falls, Ohio). He was also appointed its Chief Legal Officer and will serve as its Director of Planned Giving.

Richard Conrath, MEd ’72, PhD ’76, Miromar Lakes, Fla., wrote: “My first book, Cooper’s Moon, came out in spring 2017. (See www.coopersmoon.com.) The next two books, Blood Moon Rising and A Cold Copper Moon, will be coming out in winter 2018. The three-book mystery/crime fiction series is set in Miami, Fla., and the Everglades. Much of the action in Blood Moon Rising occurs in Cleveland.”

Dixie Benshoff Ludick, MEd ’73, PhD ’77, Aurora, Ohio, is pleased to announce the publication of her book, Increasing Your Personal and Professional Effectiveness: A Manual for Women Who Want to Accomplish More Without Changing Who They Are. She is also author of the children’s book, David Was a Pirate. (See www.drdixiebenshoff.com.) 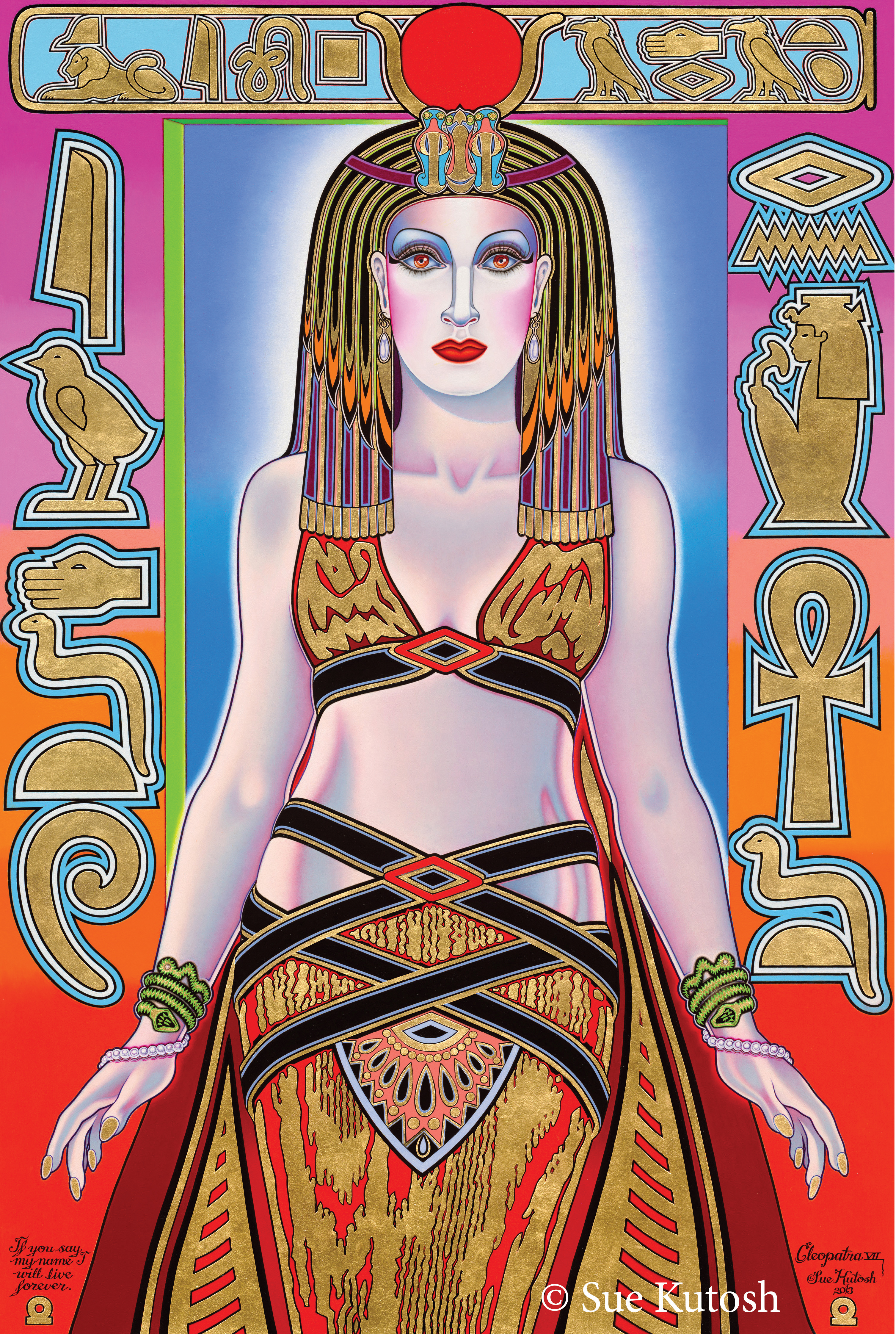 Sue Kutosh, MA ’73, New York, N.Y., wrote: “I am currently showing work on Your Art Gallery.com, with images and descriptions of two paintings and one pen and ink (https://www.yourartgallery.com/SueKutosh). Signed giclées are available on request.” Pictured above: Cleopatra VII, oil, 36 x 24 inches.

Christine Rosenbloom, BS ’73, Hartwell, Ga., after a 30-year academic career as a nutrition professor at Georgia State University, is publishing a book, Food & Fitness after 50, for the Academy of Nutrition and Dietetics.

Stephan Wilder, BA ’73, North Canton, Ohio, retired in March as North Canton police chief, after working at the department for more than 35 years. He rose through the ranks and spent the last six years as chief. Wilder plans to continue helping the North Canton Area Chamber of Commerce and volunteering with the Boy Scouts. He has completed more than 35 marathons and hopes to get back into long-distance biking and swimming.

Gary David, BA ’74, Tucson, Ariz., wrote: “Adventures Unlimited Press has recently released my fourth nonfiction book, Star Shrines and Earthworks of the Desert Southwest. I write about the Hopi tribe of Arizona and am also a published poet.”

Timothy Jay, MA ’74, PhD ’76, North Adams, Mass., is a professor of psychology at Massachusetts College of Liberal Arts. His newest book is We Did What?!: Offensive and Inappropriate Behavior in American History (ABC-CLIO, 2016).

Patricia (Hanlon) Sherman, BS ’74, Dover, Ohio, a retired registered nurse wrote: “In late 2015 I published my first book, The Blue Swing: Parental Abuse, Choices and Living Without Anger, a combination memoir and book of my own poetry, available on Amazon.com.”

Nancy McManus, BSN ’75, Hudson, Ohio, was awarded the Gingy Harshey-Meade Excellence in Leadership Award by the Ohio Nurses Foundation at the 17th Annual Nurses Choice Luncheon on April 28 in Columbus.

Rick Niece, MEd ’76, PhD ’88, Hot Springs Village, Ark., recently published Perfect in Memory: A Son’s Tribute to His Mother, his third book in the award-winning Fanfare for a Hometown series. (See www.RickNieceBooks.com.) After a 45-year career in education, Niece retired as a university president and serves as President Emeritus for the University of the Ozarks in Arkansas.

Candy (Newcomb) Watkins, BS ’77, Tacoma, Wash., wrote: “I graduated in deaf education and relocated to the Seattle area a year later. After dabbling in various jobs, I landed in early intervention for infants and toddlers with disabilities. In 2001, I started a nonprofit agency in Tacoma—A Step Ahead In Pierce County—working with these children. I’m the executive director, and the agency has since grown to a staff of 25, enrollment of about 600 children annually and a budget of $1.8 million.”

Christopher Opalinski, BS ’78, Gibsonia, Pa., was recognized as one of the “Top 50 in Pittsburgh” in the 2017 edition of Pennsylvania Super Lawyers, published by Thomson Reuters. An attorney with Eckert Seamans Cherin & Mellott LLC, he was honored for construction litigation.

Rachel (Giannamore) Legg, BFA ’79, Tampa, Fla., wrote: “I am a freelance graphic designer and a partner with my husband, Bill, in R&B Realty Group—specializing in relocation to sunny Florida!”

Kevin Moore, BA ’79, Roswell, Ga., recently joined the 50 States Marathon Club—an exclusive group of almost 4,000 runners who have participated in marathons in all 50 states—and he has no plans to hang up his running shoes. His current schedule includes marathons in San Juan, Puerto Rico, followed by events in Raleigh, N.C., and Pittsburgh, Pa., as well as half marathons, culminating in a 50-mile race later in the year.

Gregg Schoof, BA ’79, Shaker Heights, Ohio, serves as the manager of engineering student programs and is the assistant director of the Fenn Academy Program at Cleveland State University’s Washkewicz College of Engineering. He oversees recruiting, community outreach to middle schools and high schools, and engineering student organization activities. He obtained a MSSA from Case Western Reserve University in 1992.