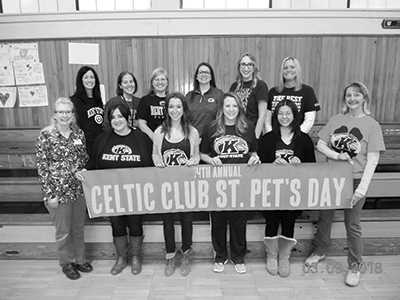 James Collver, MEd ’80, Akron, Ohio, wrote: “I started the Celtic Club of Ohio in 2002. We recently celebrated the 14th Annual Celtic Club St. Pet’s Day, which was held this year at the Richardson Elementary School in Cuyahoga Falls, Ohio, on March 9, 2018. The event is intended to help increase awareness and appreciation for rescued pets.

In the weeks prior, we held a pet food donation drive at both Richardson and Cuyahoga Falls High School, with all pet food going to the Humane Society of Summit County. The Celtic Club handed out Irish items (green derbies, shamrock head boppers, green beads, etc.) and an Irish band, Celtic Rush, played for the students, teachers and parents.

Eleven of the teachers at Richardson Elementary are Kent State graduates from the College of Education, Health and Human Services, and I arranged for a photo of them in Kent State shirts to run in the Record Courier and the Cuyahoga Falls News Press.” 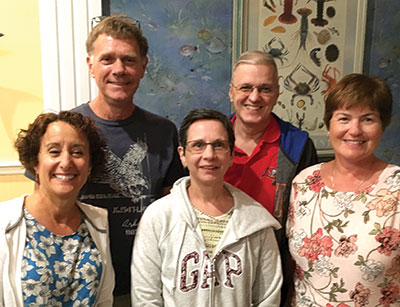 Mary (Zettelman) Greer, MEd ’83, Ravenna, Ohio, has published two volumes of poetry, Cry in the Ears of Jerusalem/To the Horizon Always There (2017) and Poems: Selected and New (2017). Both collections reflect a love of Earth and the human journey. Greer credits KSU’s professors—especially Ted Lyons, David Hassler and Maj Ragain — for her move from “forty years of private art” to a public role as an Ohio poet. Greer reads in Kent, Ohio. She also helps others map their paths through the obstacles that block success for poets.

Karen (Hawkins) Bankston, BSN ’84, Cincinnati, wrote: “I was appointed executive director of The Child Poverty Collaborative Hamilton County, while retaining a part-time faculty role at the University of Cincinnati College of Nursing.”

James Michael Kaler, MA ’84, New Orleans, La., graduated from Tulane University School of Medicine in May 2018. Prior to becoming a physician, he earned an MBA from National University (1987) and a JD from the University of San Diego School of Law (1992) and practiced litigation and patent law for 18 years. He says his career change is the result of a decades-long dream to practice primary care medicine in a rural and medically underserved community, much like the West Kentucky community in which he grew up.

Beverley Laubert, BA ’84, Lewis Center, Ohio, was appointed by Governor Kasich as interim director of the Ohio Department of Aging.

Shelley (Landis) Rogers, BA ’85, MEd ’93, Carrollton, Ga., wrote: “I have been promoted from associate professor to professor at the University of West Georgia, where I am the senior cataloger.”

Joe Wendel, PhD ’85, Euclid, Ohio, is the author of Justice Denied: An Historical Sojourn (Archway Publishing, 2017), a history of Germany and German Americans, with a
focus on the two 20th century world wars from the viewpoint of a German American
who lived in Austria during World War II. It offers information unfamiliar to most Americans, including the personal stories of German Americans sent to American internment camps in World War II.