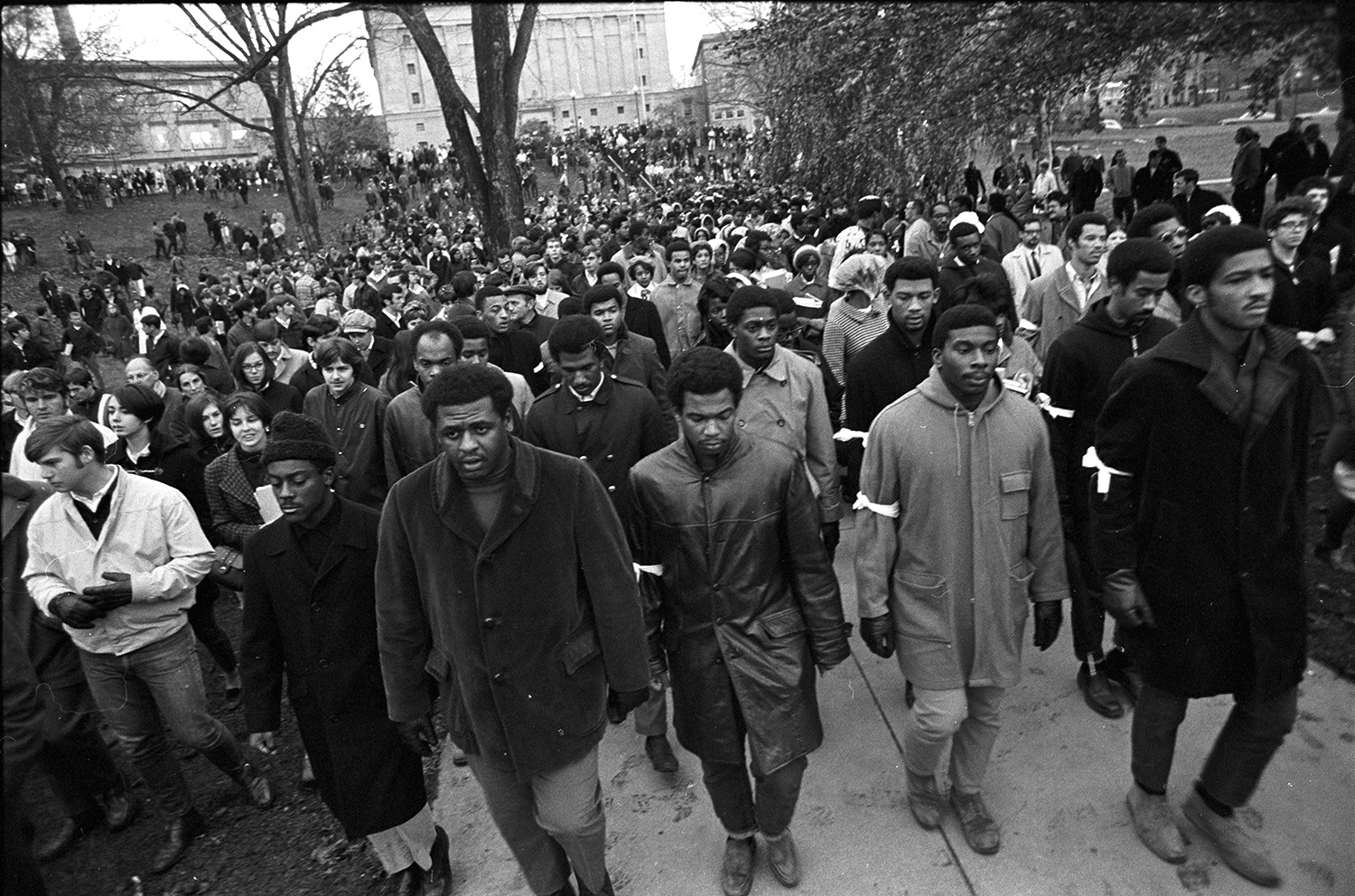 On November 18, 1968, black students leave campus in a mass exodus in response to the collapse of negotiations over their demand for amnesty from the Oakland Police Department sit-in days earlier. The walkout succeeded and led to KSU’s Black Studies program and other reforms. Courtesy Special Collections and Archives, Kent State University Libraries

As antiwar and black power movements swept the nation in the late 1960s, black students on college campuses were inspired to take more direct action to quell racism and promote equality. The students at Kent State University were no exception.

This year marks the 50th anniversary of Black United Students (BUS)—one of the oldest student organizations at Kent State University. A recent photo exhibit at the Uumbaji Gallery in Oscar Ritchie Hall chronicled their diverse activities, including protests, cultural activities, social events and national speakers that BUS has helped bring to Kent State.

BUS became a registered student organization at Kent State in April 1968. Racial tensions were climbing after the assassination of Dr. Martin Luther King Jr. on April 4 and a violent confrontation on April 6 between police in Oakland, California, and Oakland’s Black Panther Party, which challenged police brutality against the African American community. Bobby Hutton, a 17-year-old Black Panther member, was shot and killed after surrendering to police officers.

Seven months later, the above photo was taken. About 250 students—including many BUS members—silently marched off campus on November 18, 1968, protesting the university’s refusal to grant them amnesty from being charged with disorderly conduct after a sit-in by BUS and Students for a Democratic Society, held days earlier, hindered the Oakland Police Department’s on-campus efforts to recruit new officers from KSU’s law enforcement program.

The walkout shook the university and prompted some professors to cancel classes until the students returned. Three days later the students came back to campus and no charges were made, according to a paper by Lae'l Hughes-Watkins, KSU assistant professor and university archivist.

This activism resulted in the creation of the Institute for African American Affairs in 1969, the Center of Pan-African Culture (CPAC) in 1970 and the Department of Pan-African Studies in 1976. CPAC’s home base, formerly the Old Student Union, was renamed in 1977—dedicated to the late Dr. Oscar Ritchie, KSU’s first African American faculty member—and is known as “the House that BUS built.”

BUS also proposed that Kent State extend Negro History Week into Black History Month in February 1969, becoming one of the first college campuses to do so; the event received official nationwide designation in 1976 by President Gerald Ford.

Since these historic and somewhat tumultuous beginnings, BUS has evolved with the times and continues to promote the welfare of black students on campus—providing educational, cultural and social activities and taking a stand on issues of importance to blacks across America and around the world.—Bethany Sava, BS ’12