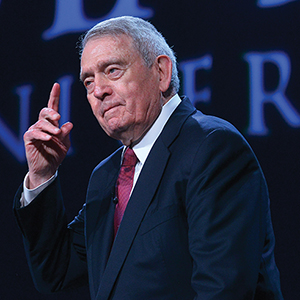 “The country needs you and your active work as a citizen now more than ever. . . . There are so many powerful forces trying to exploit what divides us that we need to remind ourselves of—and then teach—the core values of what unites us as Americans. . . . You cannot, must not, be intimidated or get distracted. For your work as a citizen is essential, noble work.” ”

Dan Rather on Kent State University 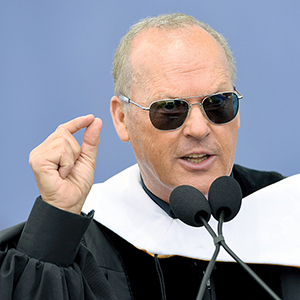 “[While hitchhiking to Washington, D.C., from Kent State in 1971] I got picked up by a guy roughly my age, and we got to talking. . . . We were headed to the same place. The difference was he was in the National Guard, and I was going to protest the war in Vietnam. . . . He was going down to keep the peace, and I was going down to march for peace. We weren’t that different, really.”

—Michael Keaton, Oscar-nominated actor, commencement speaker and recipient of an honorary degree of Doctor of Humane Letters  at Dix Stadium, May 12, 2018

Individuals from around the world have sought more information about the events that surround May 4, 1970.

To digitize some of the most used portions of the extensive May 4 Collection, Kent State University Libraries received a grant from the National Historical Publications & Records Commission (NHPRC). The two-year project—Kent State Shootings: Actions and Reactions—will digitally capture more than 35 cubic feet of materials (approximately 50,000 documents) to allow users from anywhere to explore the contents through free, online access.

“The NHPRC grant made it possible for us to add a significant amount of content to our May 4 digital repository, such as photographs, artwork, correspondence, flyers, posters and more,” says Lae’l Hughes-Watkins, university archivist.

The project team, led by Virginia Dressler, digital projects librarian, and Cara Gilgenbach, head of Special Collections and Archives, has already digitized more than 26 of the 35 collections and is scheduled to complete their task by September.

Dedication of Landmark May 4 Site:
The 17-acre site on the Kent Campus where students clashed with the National Guard in 1970 was added to the National Register of Historic Places in 2010 and was declared a National Historic Landmark by the U.S. Secretary of the Interior in 2016.

Kent State officially recognized the landmark status during a dedication ceremony at the Kiva on May 4, 2018. It featured a keynote address by former Ohio Governor Richard Celeste and the unveiling of a plaque to be placed at the site by President Warren, members of the Kent State Board of Trustees, the May 4 Task Force and the National Park Service.

“Standing room only, baby, that’s the way we like it.”

That’s how Golden Flash and Academy Award–nominated actor Michael Keaton opened his commencement remarks before the crowd of more than 21,000 attending the One University Commencement at Dix Stadium on May 12, 2018.

Prior to giving the commencement address, Mr. Keaton joined more than 3,000 graduates in wearing their caps and gowns as Kent State awarded him an honorary degree of Doctor of Humane Letters for his contributions to film performance.

Kent State conferred 5,345 degrees this spring—the second year that all Kent State graduates from the eight-campus system were convened and honored in one ceremony.

Economic Engine
Findings of a recently released report of Kent State's economic contributions to the region in FY17.

List Girl
Kelsey Merritt, BS '18, is checking off items on her lengthy bucket list to live her best life now.

Sandy's Scrapbook
The May 4 Center presents an exhibit on the life of Sandy Scheuer — the first of four planned exhibits to pay tribute to each of the four students killed on May 4, 1970.