At the end of each semester, members of Kent State’s world music ensembles demonstrate what they’ve learned in a World Music Concert—an enlivening evening of music and dance organized by the Ethnomusicology Program in the Hugh A. Glauser School of Music.

The ensembles, open to undergraduate and graduate students of any major or musical background, cover a range of cultural music and dance from Africa, Asia and the Caribbean.

Those cultures are represented in the Ethnomusicology Program’s collection of world music instruments, available for students to study in courses and play in the ensembles. (See a selection of instruments from Ghana, Thailand and China, pictured below).

Many of the instruments (and the custom cabinets in which they are housed) were donated by Kent State ethnomusicology professors emeriti Terry E. Miller, PhD, and Sara Stone Miller, PhD—and a recent donation of Northern Thai instruments by Gerald P. Dyck expanded the collection.

The KSU Thai Ensemble, founded by Dr. Terry Miller in 1978, is one of the few Thai ensembles in the American academic system. Members traveled to Los Angeles in March to perform at a conference highlighting the restoration of the UCLA Thai instrument collection and its newly established Thai Ensemble. “Our students saw the music they are learning performed at the highest level,” says Andrew Shahriari, PhD ’01, associate professor of ethnomusicology.

See www.kent.edu/music/upcoming-concerts for more information about the World Music Concert. The fall concert, free and open to the public, is scheduled for December 5, 2017, at 8 p.m. at Ludwig Recital Hall in the Center for the Performing Arts. 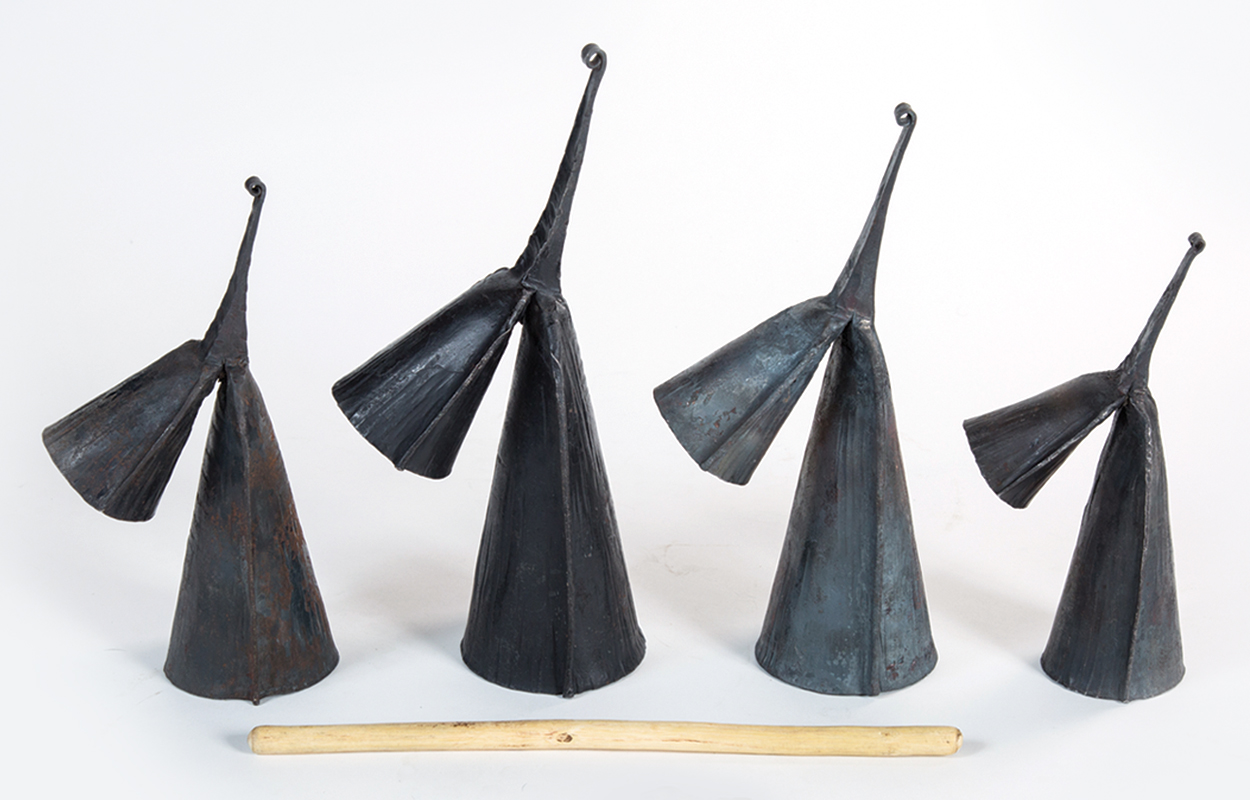 A backbone of traditional music of the Ewe (EH-way) people (an ethnic group concentrated in Ghana and also found in Togo, Benin and Nigeria), this clapperless forged iron bell has two tones (low and high). A wood stick is used to strike the rim of the bell, which vibrates when the bell is played. 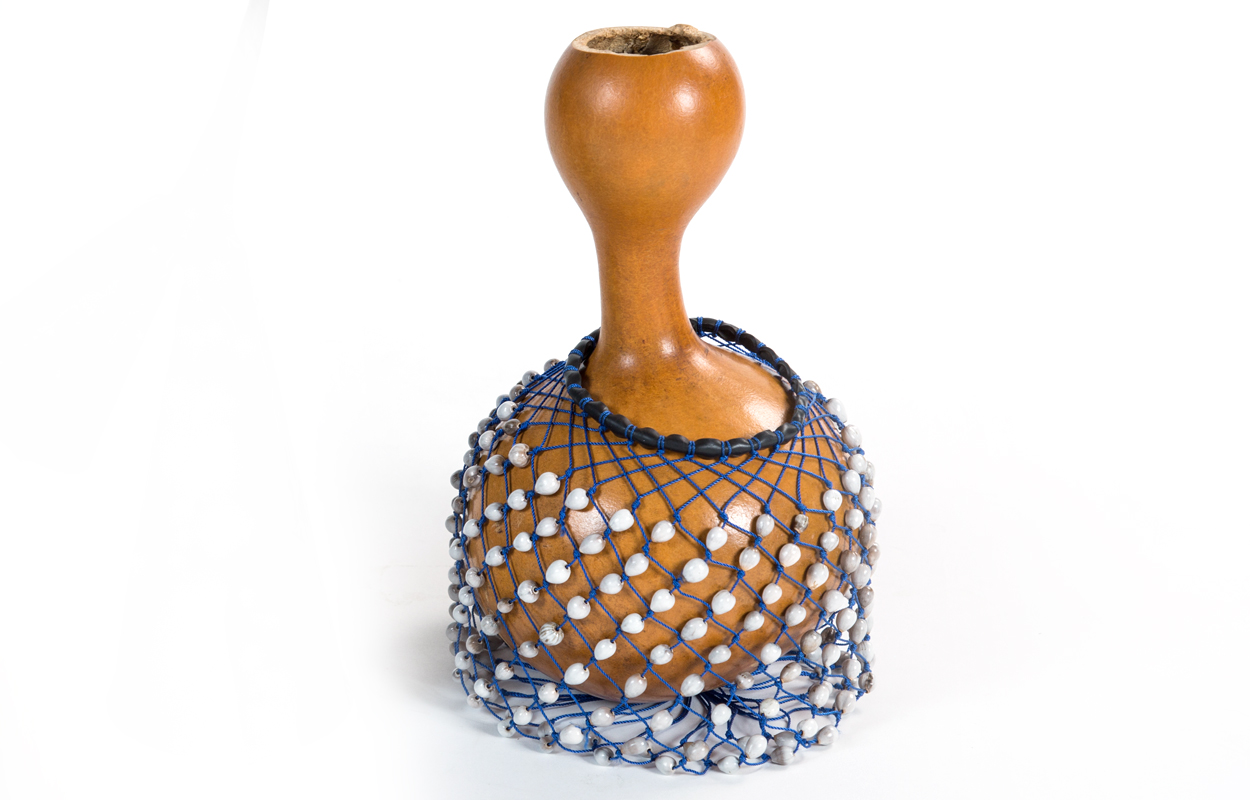 A rattle-like instrument used in traditional Ewe music, made from a hollowed-out gourd covered with a net of seeds or beads. 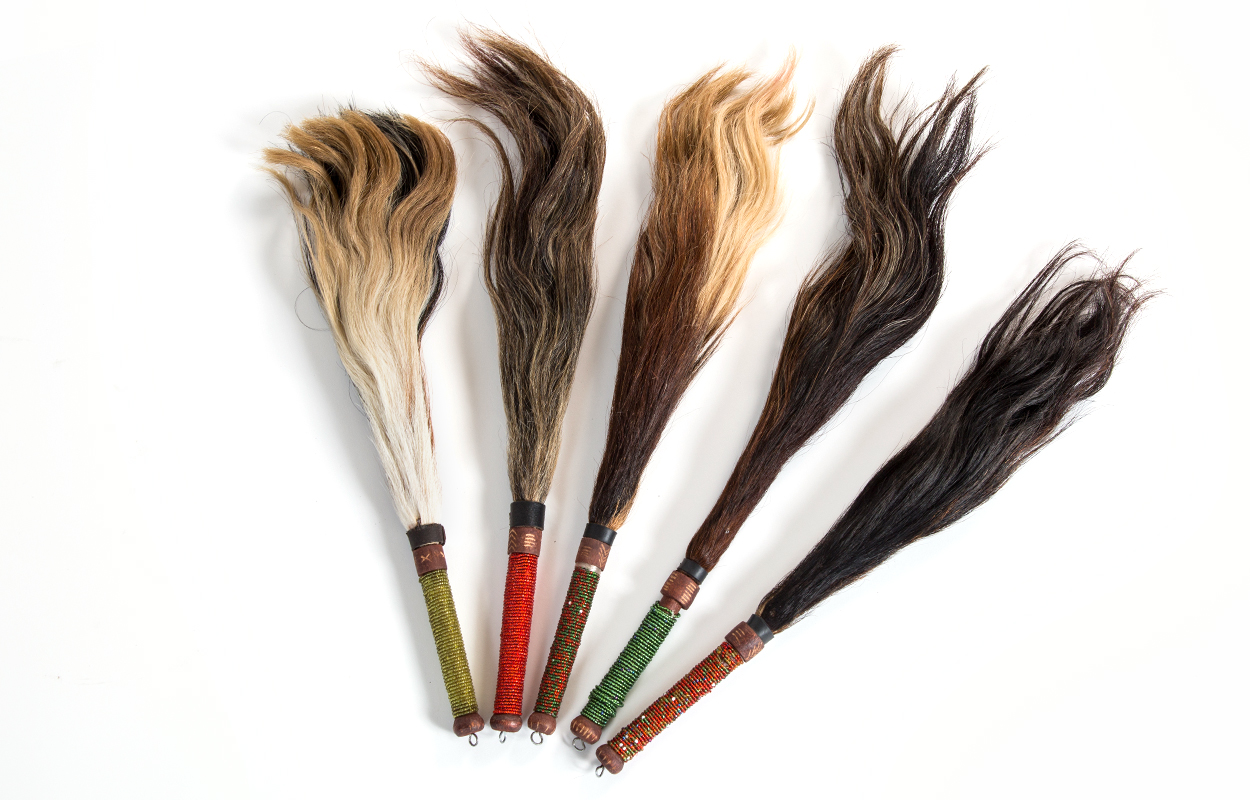 Accessories that symbolize weapons used by dancers in Agbekor, an Ewe battle dance performed prior to battle to energize warriors or after battle to describe great deeds or the death of a leader. A section of Agbekor will be performed in the fall World Music Concert. 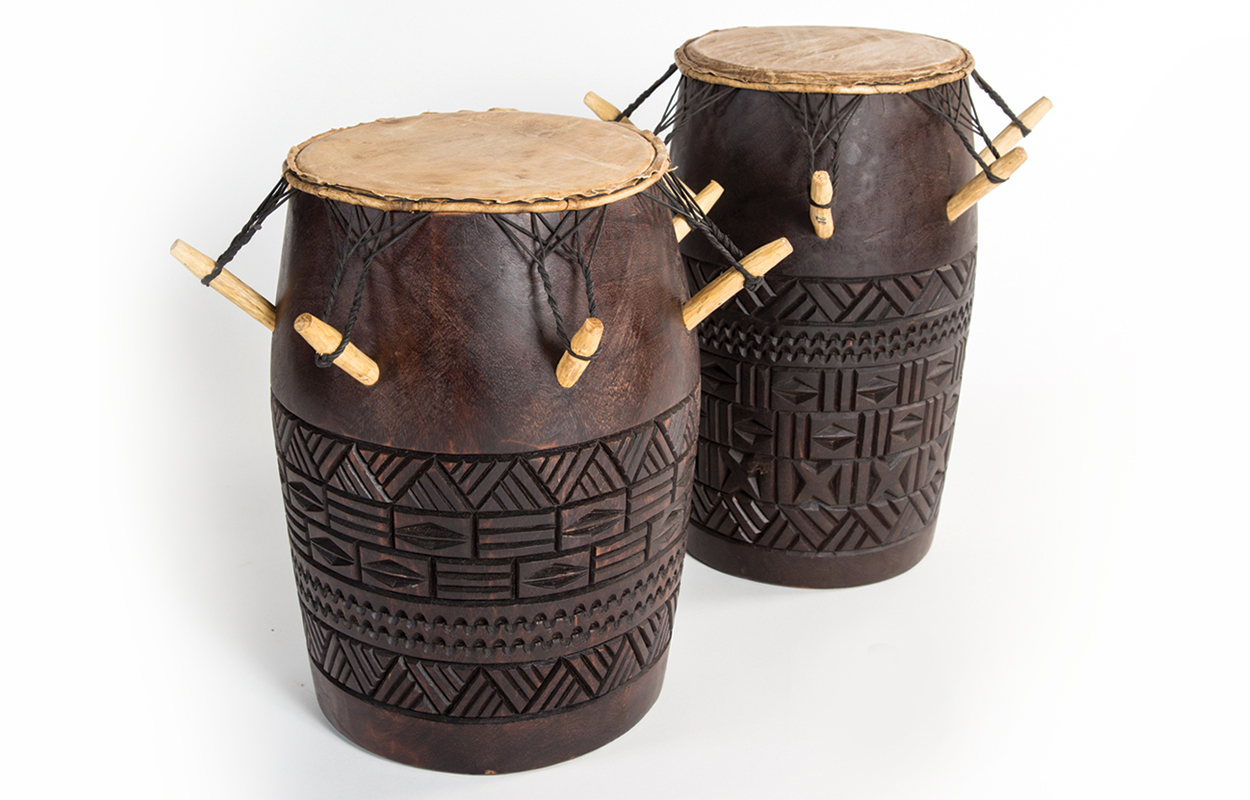 Played with sticks and hands, these Ewe drums are hand-carved from logs and stretched with antelope skin. They were brought back from Ghana by assistant professor of ethnomusicology Janine Tiffe, MM ’06, PhD, who codirects the African Ensemble and the Steel Band. 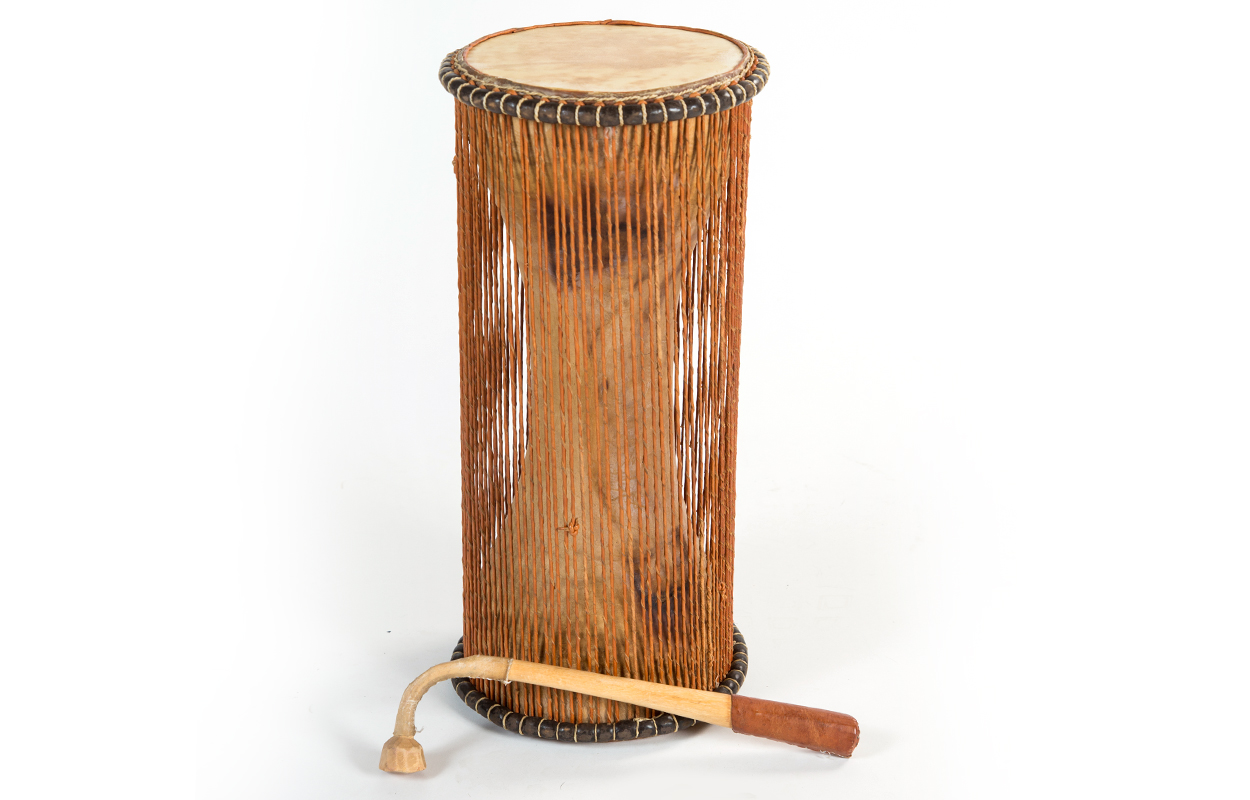 Called by many names in different areas, this hour-glass shaped drum from West Africa has two drumheads connected by leather tension cords that allow a player to modulate the pitch by squeezing the drum between the arm and body and playing it with a curved stick. 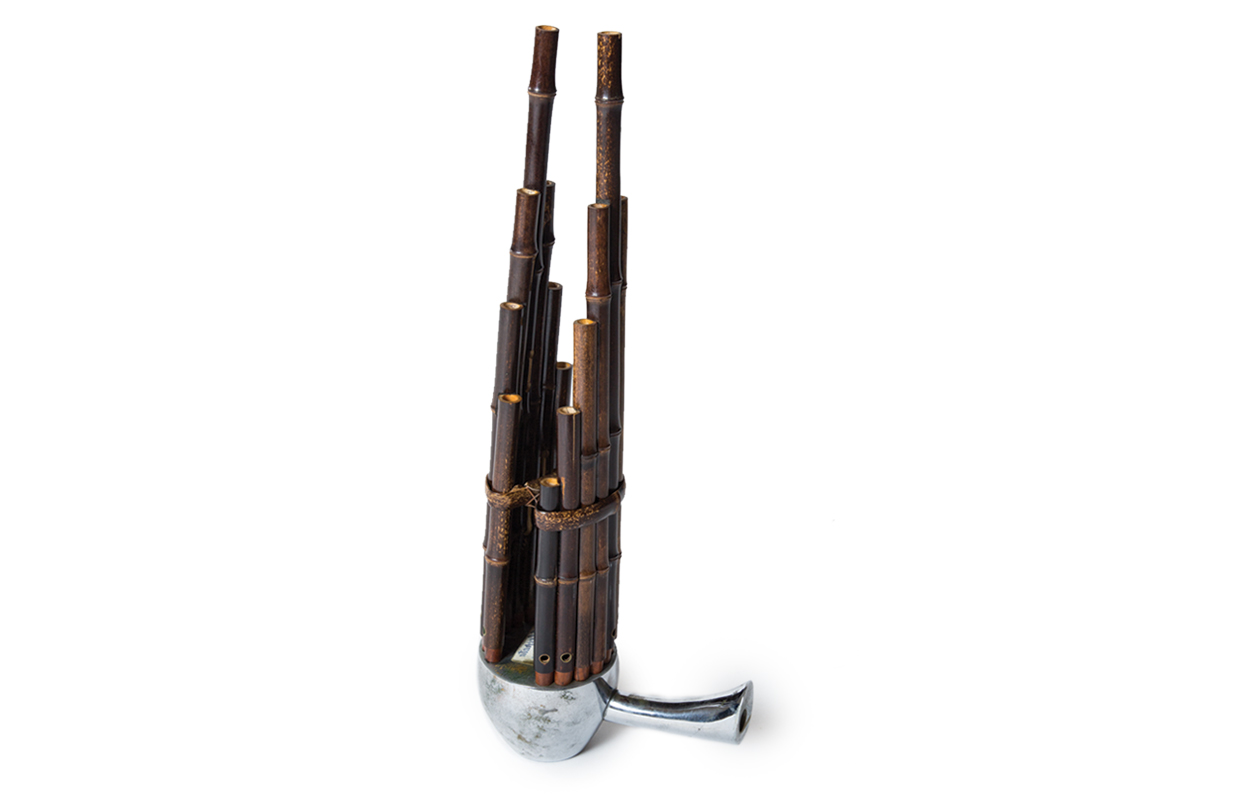 A Chinese mouth-blown free reed instrument consisting of vertical pipes, it is polyphonic and popular as a solo instrument. A student who is expert in playing the sheng will perform a solo in the fall World Music Concert. 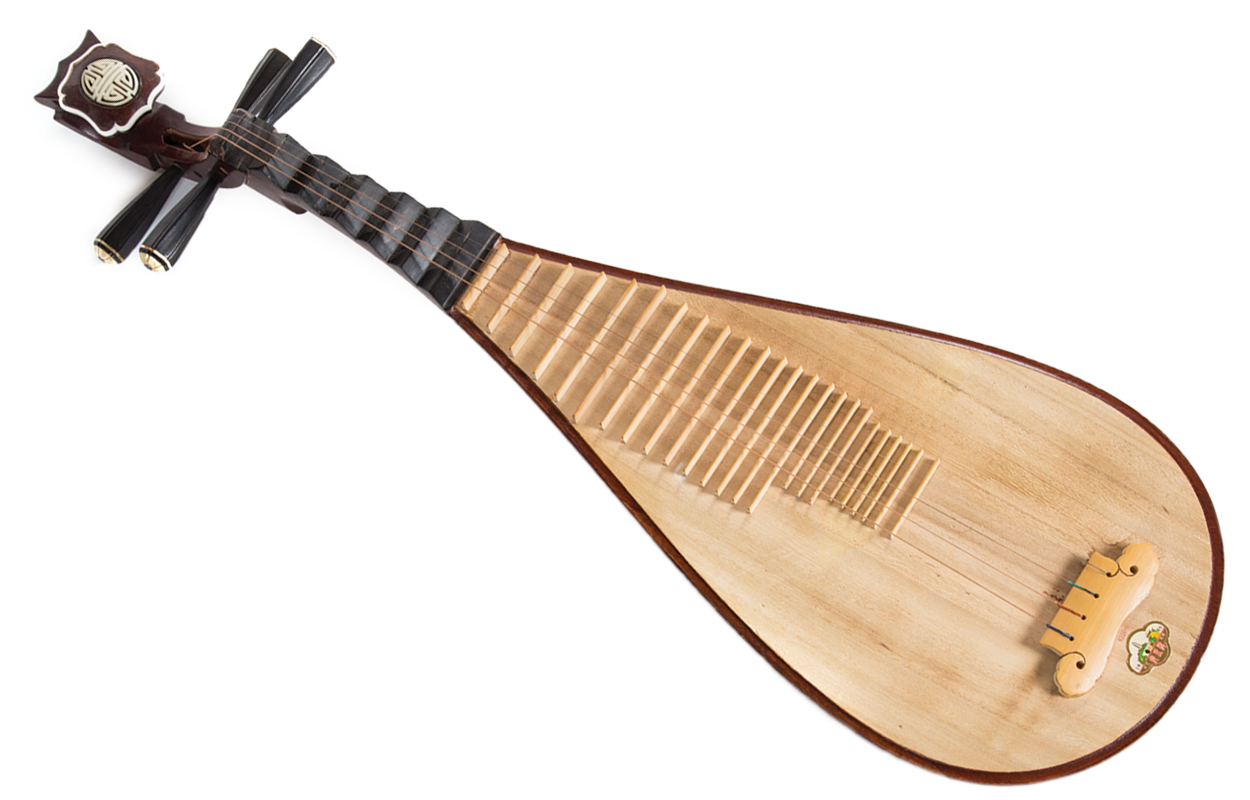 A four-stringed plucked instrument, sometimes called the Chinese lute, the pipa has a pear-shaped wooden body and a varying number of frets. It is one of the most popular Chinese instruments and has been played for almost two thousand years in China. 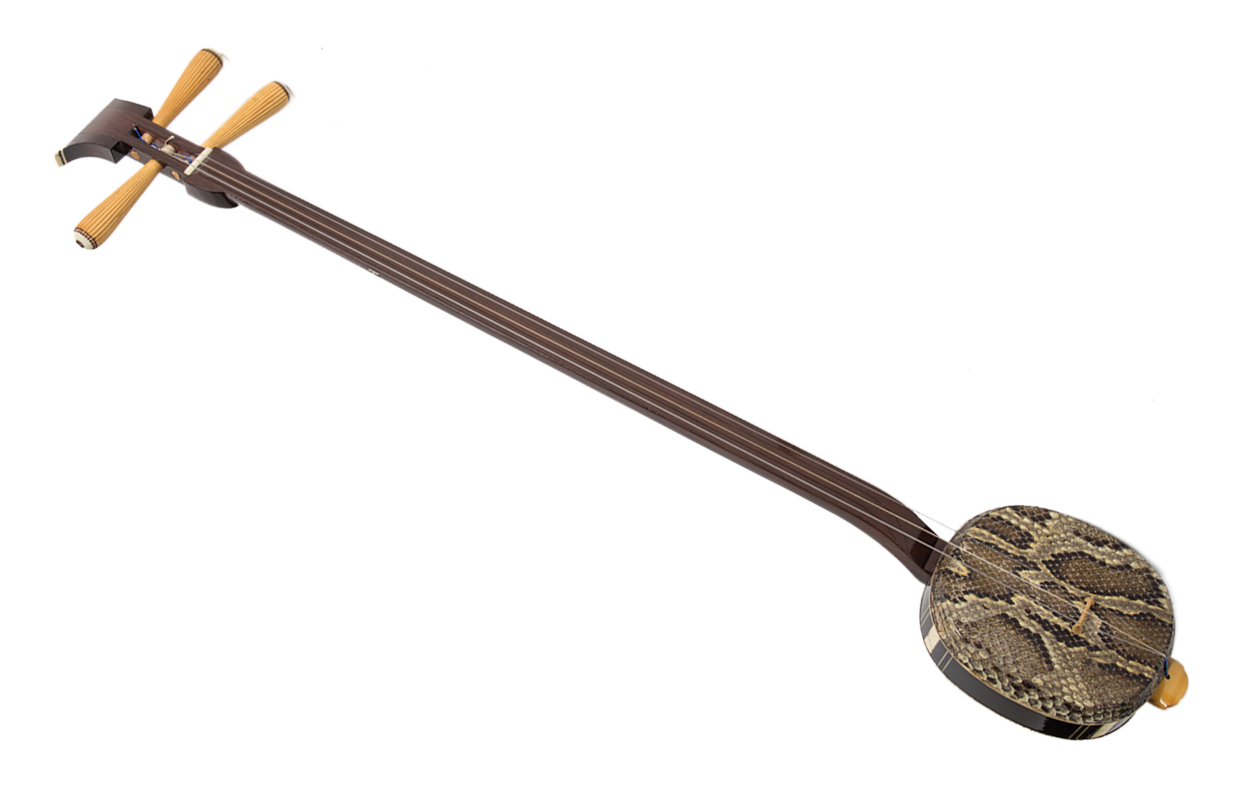 A three-stringed fretless plucked lute that is traditionally made from snake skin stretched over a rounded rectangular resonator. The sanxian is made in several sizes for different purposes, and it sounds similar to a banjo. 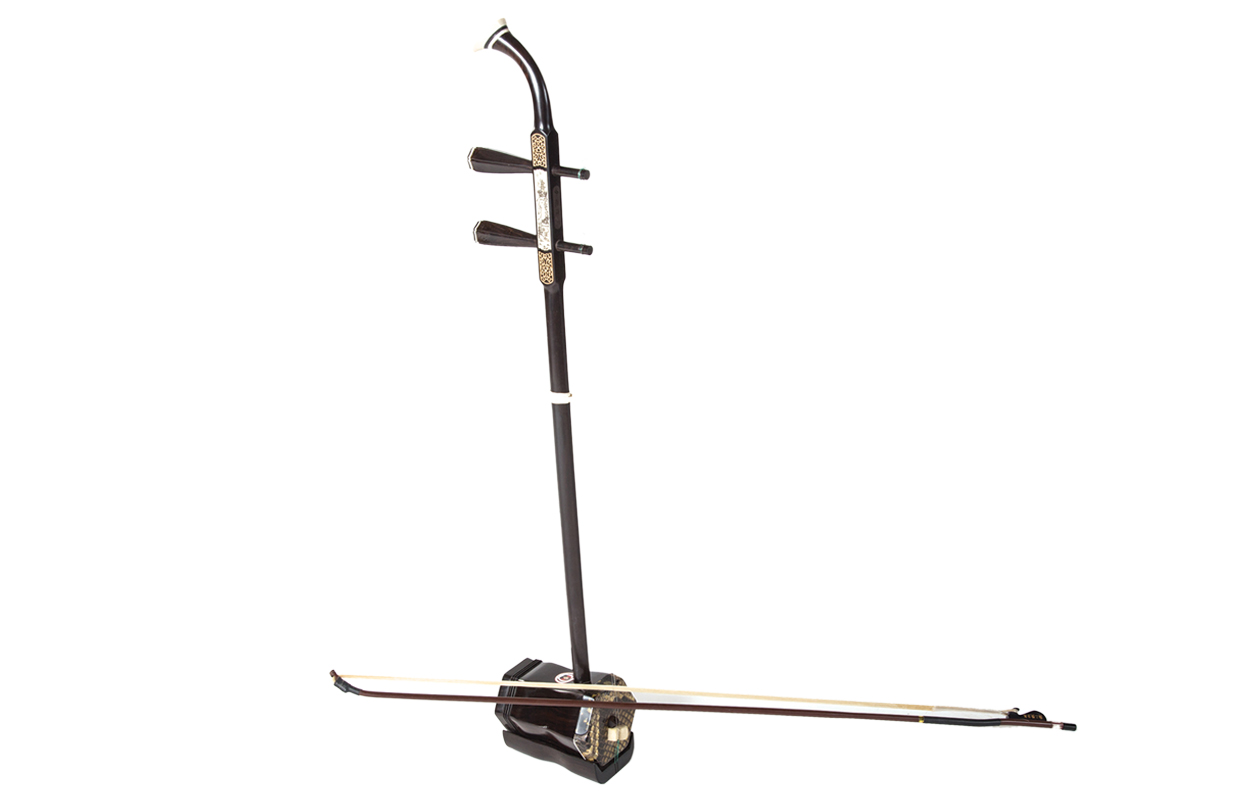 A two-stringed bowed instrument, sometimes known as the Chinese violin or Chinese two-stringed fiddle. The erhu originated in central Asia and is believed to have come to China in the 10th century. Though it only has two strings, it can convey a wide range of emotions.

A low-pitched xylophone used in playing the music of Thailand. It has 18 keys, typically made from bamboo, which are stretched over a boat-shaped trough resonator. Musicians sit cross-legged on the ground as they play it, and it is usually played to accompany a ranad ek, a xylophone with a higher pitch. 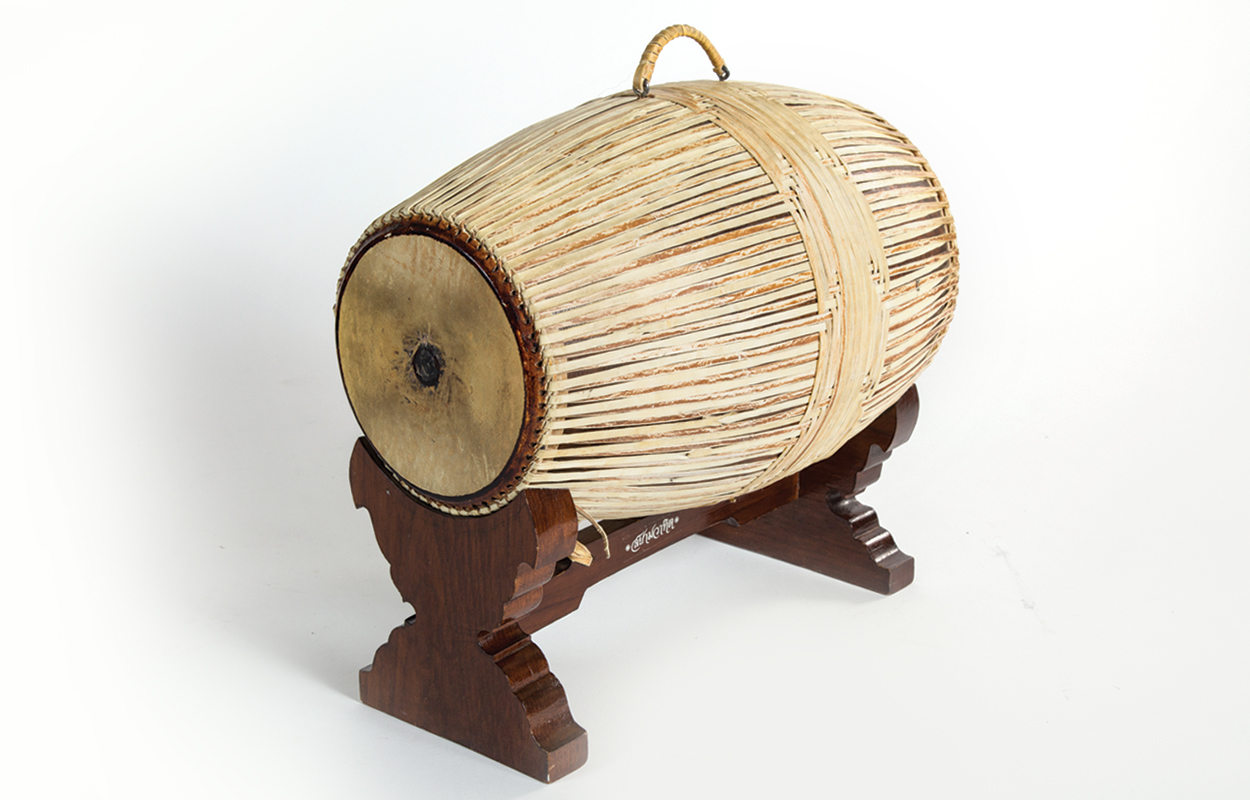 A traditional Thai drum that is barrel-shaped with two heads. It is played by both hands, one on each side. Most sacred of all Thai instruments, the taphon is believed to embody the spirit of the first teachers of Thai music and dance. 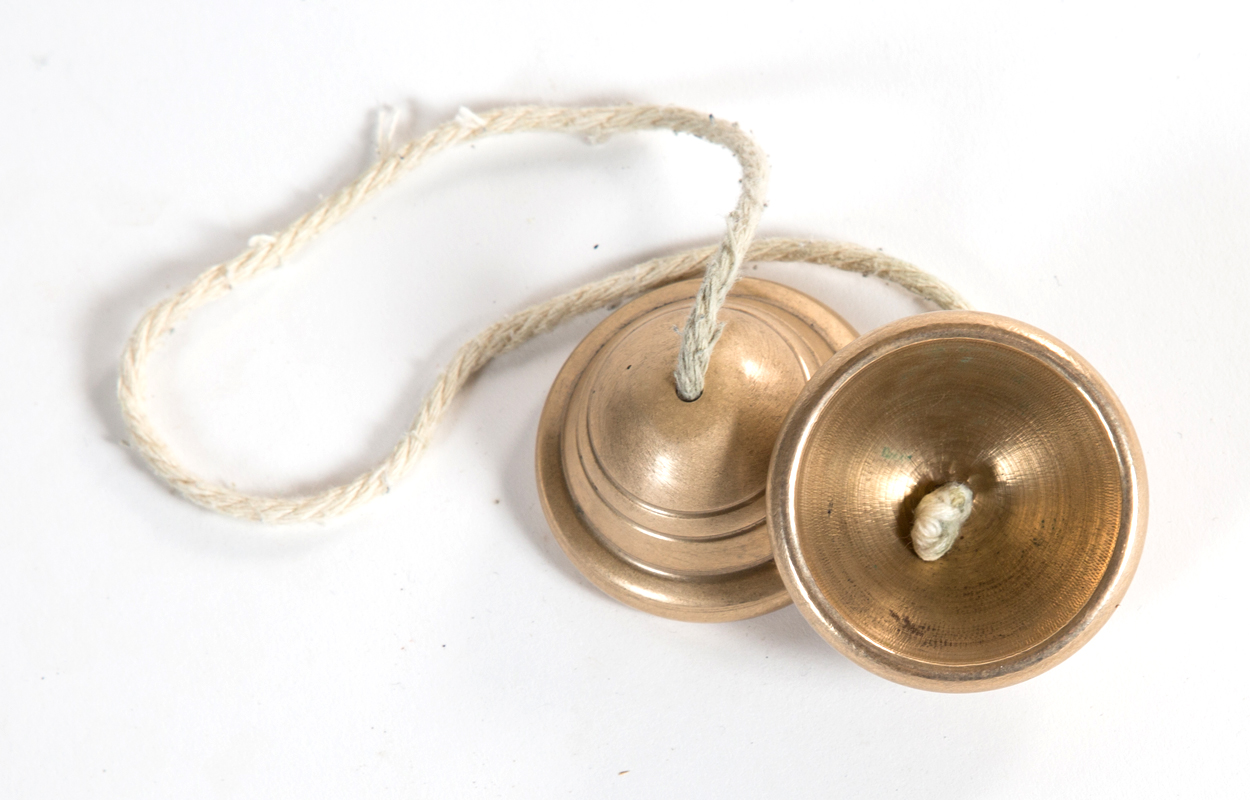 Thai finger cymbals, used for keeping time. Melody in both Thai and Khmer music is regulated by cyclic patterns realized on the drums and ching.

Double-headed barrel drums used in Thai music. There are two types, one high-pitched (male) and the other low-pitched (female); they are always played in a pair. Believed to have originated in Sri Lanka, it is referred to as a foreigner’s drum: klong means “drum” and khaek means “Indian or Malay.” 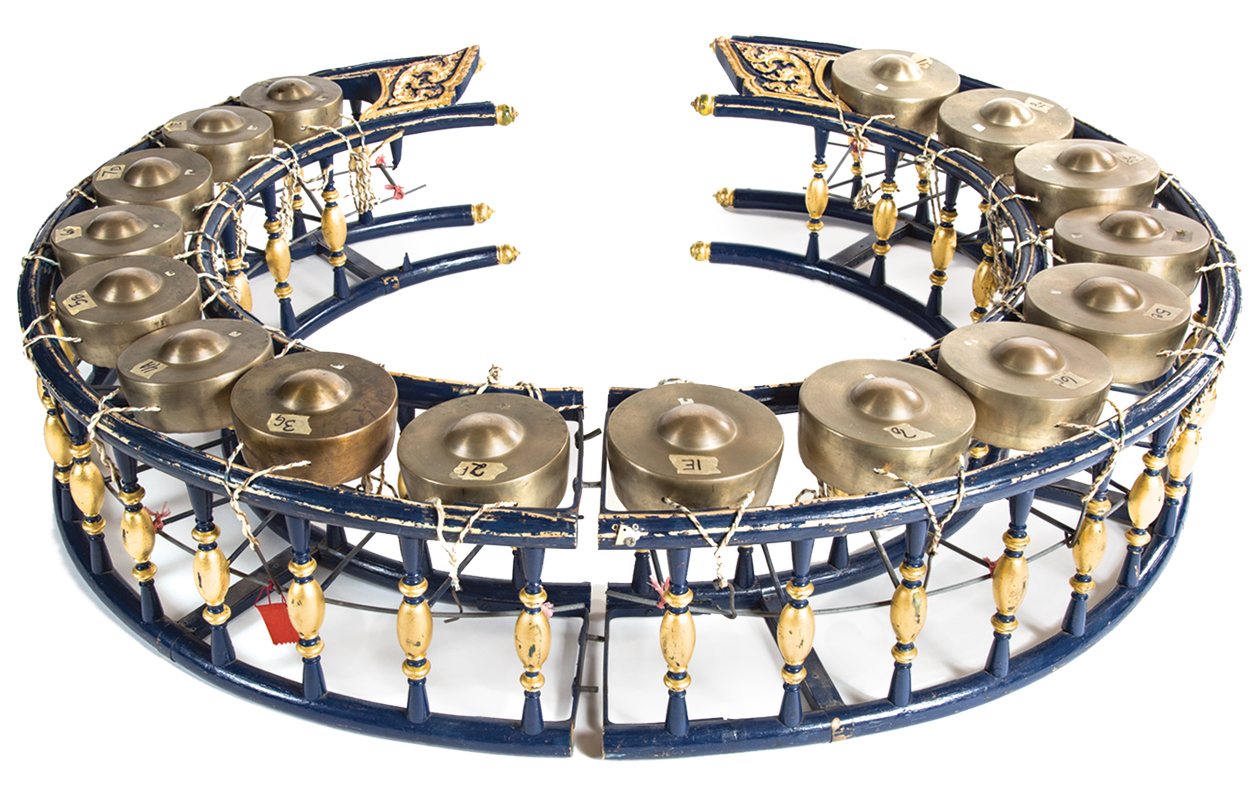 A gong circle used in Thai music. It has 16 tuned bossed gongs in a rattan frame and is played with two beaters. The player sits in the middle of the circle.