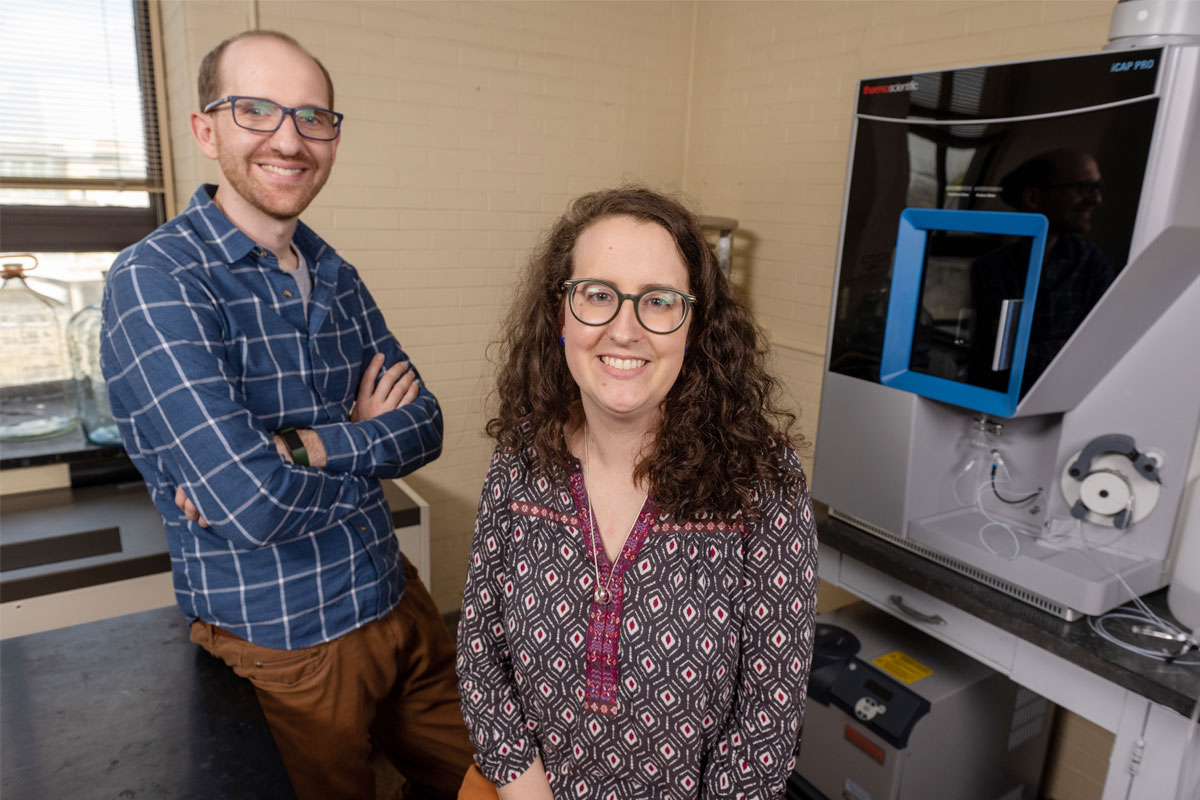 On Land and At Sea

In their shared Biogeochemical Oceanography and Soil Science (or BOSS) laboratory at McGilvrey Hall, married couple Timothy Gallagher, PhD, and Allyson “Allie” Tessin, PhD, both assistant professors of geology, are studying the Earth from two perspectives—on land and at the bottom of the sea—to better understand climate change.

Gallagher, a biogeochemist and sedimentary geologist, digs into the land, quite literally, to study how terrestrial environments have responded to climate change. He’s cataloging what human intervention has done and might continue to do to the Earth’s soil.

Tessin, a biogeochemist and sedimentary geologist with an interest in paleoceanography, recently spent two months at sea to study the relationship between the marine carbon cycle and climate change. On a research vessel that’s been drilling into the Earth at the bottom of the ocean, she analyzed the core samples collected to see how carbon has been stored in layers of sediment in the seafloor.

Together, their research promises a more complete understanding of climate change.

“People studying climate change on land and at sea don’t necessarily ever talk to each other. And we do—even if it’s over a beer at the end of the day.”

The couple, who wed in 2015 and earned PhDs from the University of Michigan in 2016, didn’t have an opportunity to work together until they came to Kent State University in August 2020 and launched their BOSS laboratory.

“We’re working on similar questions with similar motivations—but in slightly different ways,” says Gallagher. But working side by side, communicating on various projects, “helps give us a slightly wider perspective—a diverse way of thinking about some of the problems we’re thinking about,” he says.

Tessin concurs. “People studying climate change on land and at sea don’t necessarily ever talk to each other. And we do—even if it’s over a beer at the end of the day,” she says. “There are a lot of things that happen on land that also happen at sea, in a different way. And so [those conversations and collaborations] kind of push my brain outside of my own community.”

Here’s a look at their research—and the mark they hope to leave on the larger body of climate change research and discussion. 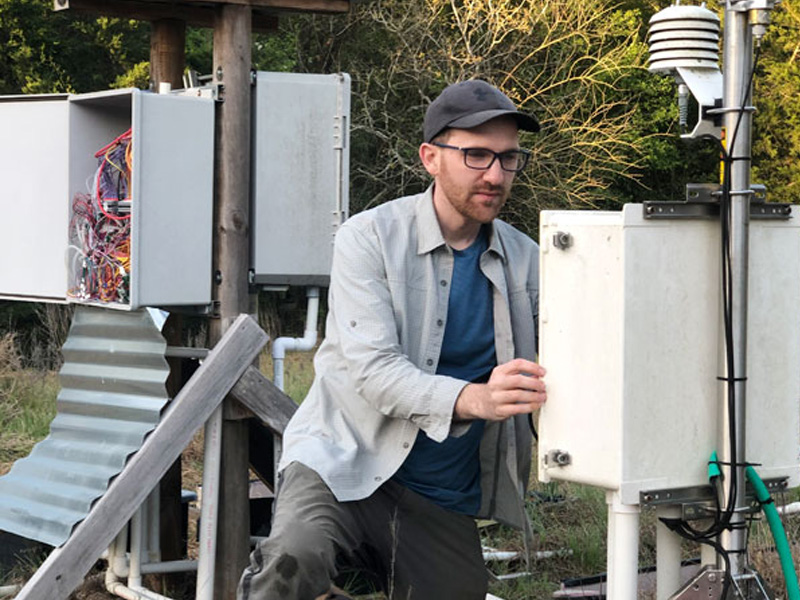 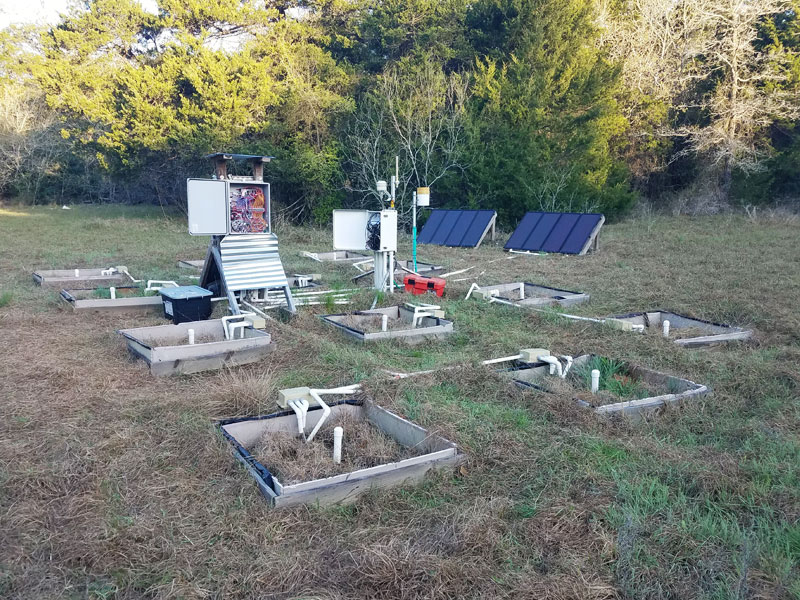 Examining soil can reveal much more than whether your garden has enough moisture to thrive.

Soil is a mixture of minerals, organic matter, gas and water—and, as an example, one of the minerals it contains is calcite, or soil carbonate. By studying soil carbonate, researchers can understand how climate and environments changed in the geologic past, millions of years ago, Gallagher says. The presence—or lack—of this one mineral can help reveal the Earth’s temperature, the levels of carbon dioxide in the atmosphere and when mountain belts first rose.

In other words, studying soil carbonate can create a “really useful archive of past clues about Earth’s climate system, going back millions of years,” Gallagher says. And that archive of Earth’s past can help scientists better predict Earth’s future as the climate changes.

By studying soil carbonate, researchers can understand how climate and environments changed in the geologic past, millions of years ago.

But by going back into the geologic past, researchers can “provide both context and test-case scenarios” for climate modelers, he says, which can help them understand how the Earth behaved millions of years ago, when it was hotter and had more carbon dioxide.

“I started looking at modern soils to try to understand things like how and when does [soil carbonate] form in the soil to improve the accuracy of our past reconstructions,” Gallagher says.

He has excavated soil in Texas (where he was a postdoctoral fellow at the University of Texas at Austin) and throughout Ohio, including in Ravenna and at the Huff Run Watershed near Mineral City. From sites around Ohio, he scoops up soil with a hand shovel and transports it in zip-close plastic bags back to his laboratory. He stores the soil in glass bottles, in a refrigerator, until he’s ready to test it. (Keeping the soil cold helps slow any changes.)

In one experiment, Gallagher adds sugar to bottles of soil to better understand how the microbes in the soil eat the sugar and breathe, and how that process changes over time. He might sprinkle water on top of some soil samples to mimic rainfall and withhold water from others to mirror a drought. “Then I watch how the organisms respond,” he says, “and how quickly and at what sort of rates and ratios they breathe.”

The experiments help Gallagher build a fundamental understanding of what controls “soil respiration,” or the measure of the carbon dioxide the soil releases.

“We can explore things like: How does temperature affect that respiration rate in the lab?” he says. Those laboratory readings act as a guide for scientists in the field, who are trying to understand in real time how soil respiration is responding to climate change. 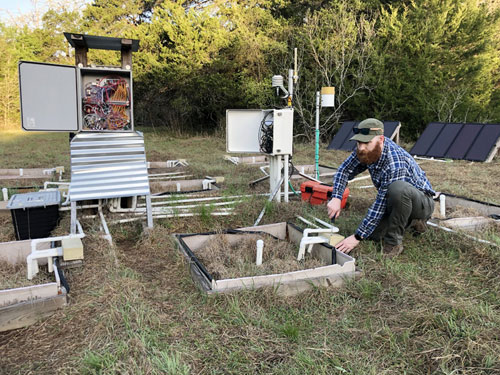 By burying equipment with physical environmental sensors in the soil, Gallagher can measure the soil’s moisture and temperature at any given time. Eventually, he will measure soil gases the same way in Ohio as well: Gas analyzers with pumps suck in air from the soil, then measure the amount of both oxygen and carbon dioxide and relay the data to a computer program.

In his laboratory at Kent State, Gallagher uses a high-precision gas analyzer to look at differences in oxygen and carbon dioxide “and try to interpret what that gas signal means,” he says.

“We are trying to improve our understanding of both modern soil carbon cycling and the archives that we use to reconstruct climate variables in the geologic past,” he says, noting that the research often leads to more questions he and his students must try to answer.

But he’s hopeful that his studies will help uncover some of the fundamental processes of soil respiration and what controls it. That could help climate change modelers develop more precise predictions of future climate change.

Learn more about his research. 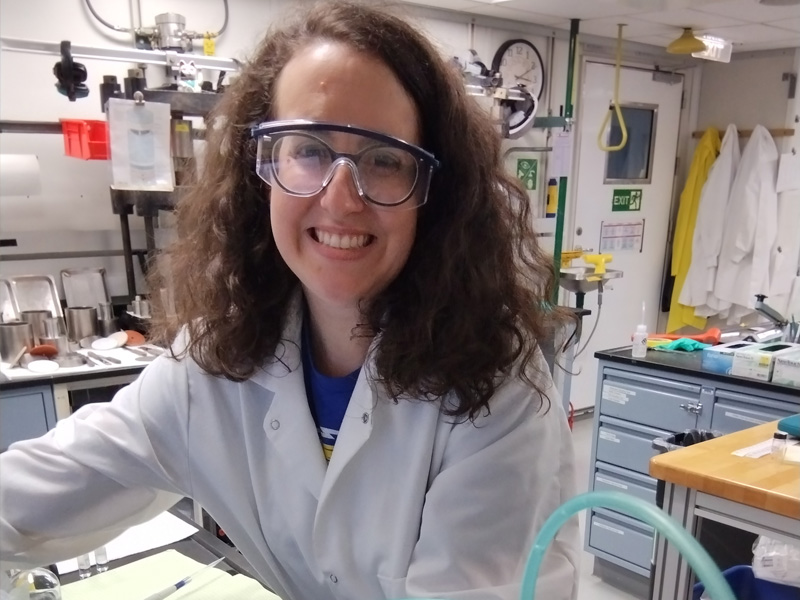 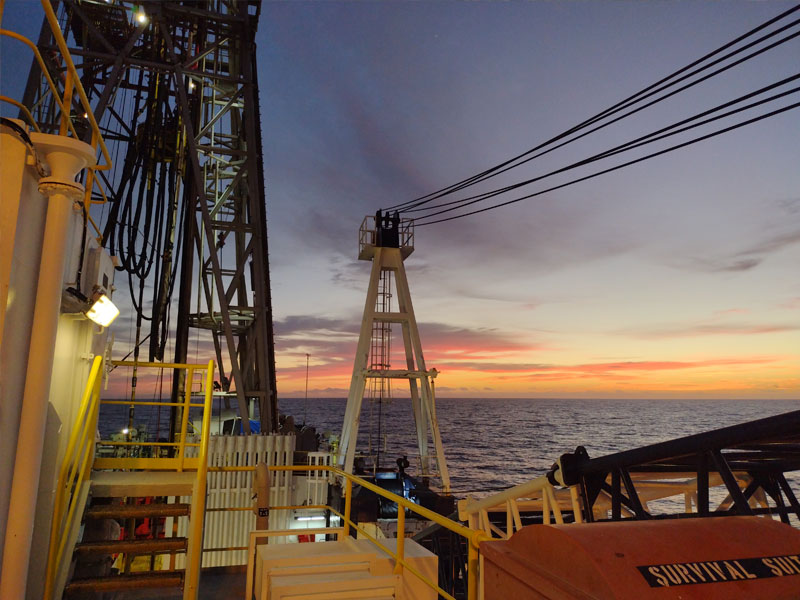 The fundamental concept of climate change is that carbon is being added to the atmosphere, Tessin says. But instead of focusing on how that carbon gets there, she wants to look at what happens to the carbon once it’s touched the ocean.

“The surface of the ocean is in direct contact with the atmosphere. You see that when you stare at the horizon,” she says. “Which means that if we put carbon dioxide into the atmosphere, a lot of it is just going to sink right into the oceans.”

Tessin studies what happens when that carbon dioxide makes it to the seafloor. For example, her research asks: Is it preserved? Is it buried for millions of years? How is it buried in the floor?

The seafloor’s sediment preserves the record of carbon dioxide like pages in a book: Each year or decade or millennium, sediment is laid down, Tessin says, “providing this opportunity to turn back each layer of information.”

In February, Tessin boarded the JOIDES Resolution, an international research vessel (operated by Texas A&M University on behalf of the International Ocean Discovery Program) that drills into the ocean floor to collect and study core samples. She departed from Cape Town, South Africa, with more than two dozen other scientists (from Australia, China, Germany, India, Japan, Netherlands, Norway, Spain, the UK and the USA) and a slew of onboard staff and crew for a two-month-long journey.

“It’s a way to see how the oceans reorganized, and what changed in response to big inputs of carbon dioxide.”

Tessin and the other members of Expedition 392 traveled to the southwestern Indian Ocean to take samples from several sites along the Agulhas Plateau, a large oceanic plateau about 500 kilometers (about 310 miles) south of Africa, which rises up to 2,500 meters (about 1.5 miles) above the surrounding seafloor. The scientists were interested in analyzing drill cores to figure out when the plateau was formed, what the environment was like at the time and how it changed over the years.

With a drill that uses a piston core, the team collected samples from as deep as one kilometer (approximately 3,280 feet) below the seafloor. Tessin likens the process to pushing a straw into a layer cake: If you cap the straw and pull it up slowly, you’ll come away with a sliver containing every layer of the cake. “The simplest kind of sediment retrieval that we were doing is basically a very expensive version of that,” Tessin explains. “We were just pushing a tube into soft sediment and pulling up those layers in a way that hopefully preserves them.”

Each sample was 10 meters (about 32.8 feet) long. The scientists gathered at what’s called the “catwalk,” a covered portion of the ship, where they sliced each sample into meter-and-a-half (about 4.9-foot) sections. Then each scientist took sections for experiments. 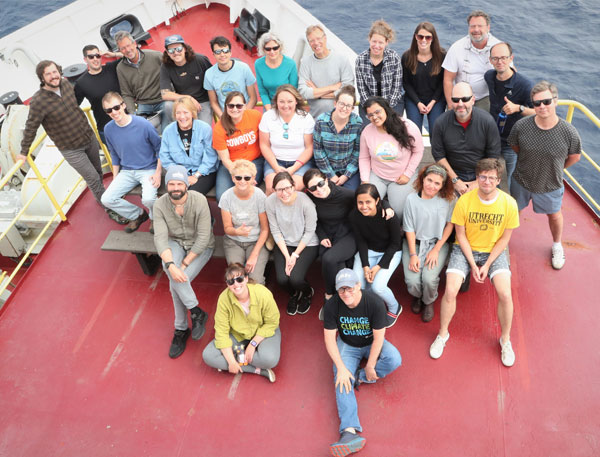 Tessin’s job on the ship was to pull water from collected samples, then examine the chemical composition of the rocks, sediments and water. To do that, she placed what she calls a “baby” section of core into a human-sized plastic bag, which she filled with nitrogen to prevent the core from being altered by oxygen.

Reaching into the bag she would cut the core down until what remained was only the part that had not been in contact with modern seawater or oxygen on deck. Then she placed that little nugget in a hydraulic press that pushed down on the core with 30,000 pounds of force, until the water came out of the rock, and she could slurp it up with a syringe. That way, she says, she could study the sediment and the water, too.

From the depth of sediment the drill reached, Tessin is able to look back as many as 100 million years—to a time when dinosaurs roamed the Earth, the oceans were a lot hotter and there was a lot more carbon dioxide in the atmosphere, she says. “It’s a way to see how the oceans reorganized, and what changed in response to big inputs of carbon dioxide.”

In other words, Tessin says she is “trying to reconstruct what happened in past climate events—past carbon addition events—to see what happened to ocean chemistry.”

According to the ship’s log, one of the mission’s notable successes was the recovery of a core that shows evidence of a mass-extinction event of 66 million years ago, when an asteroid hit the planet, ending the Cretaceous period.

Tessin says she’s still in the early stages of making sense of all she’s found so far in her core samples. But she says, “I think there are going to be really cool, large-scale implications for climate change that come out of it.”

See information about the JOIDES Resolution and learn more about IODP Expedition 392. 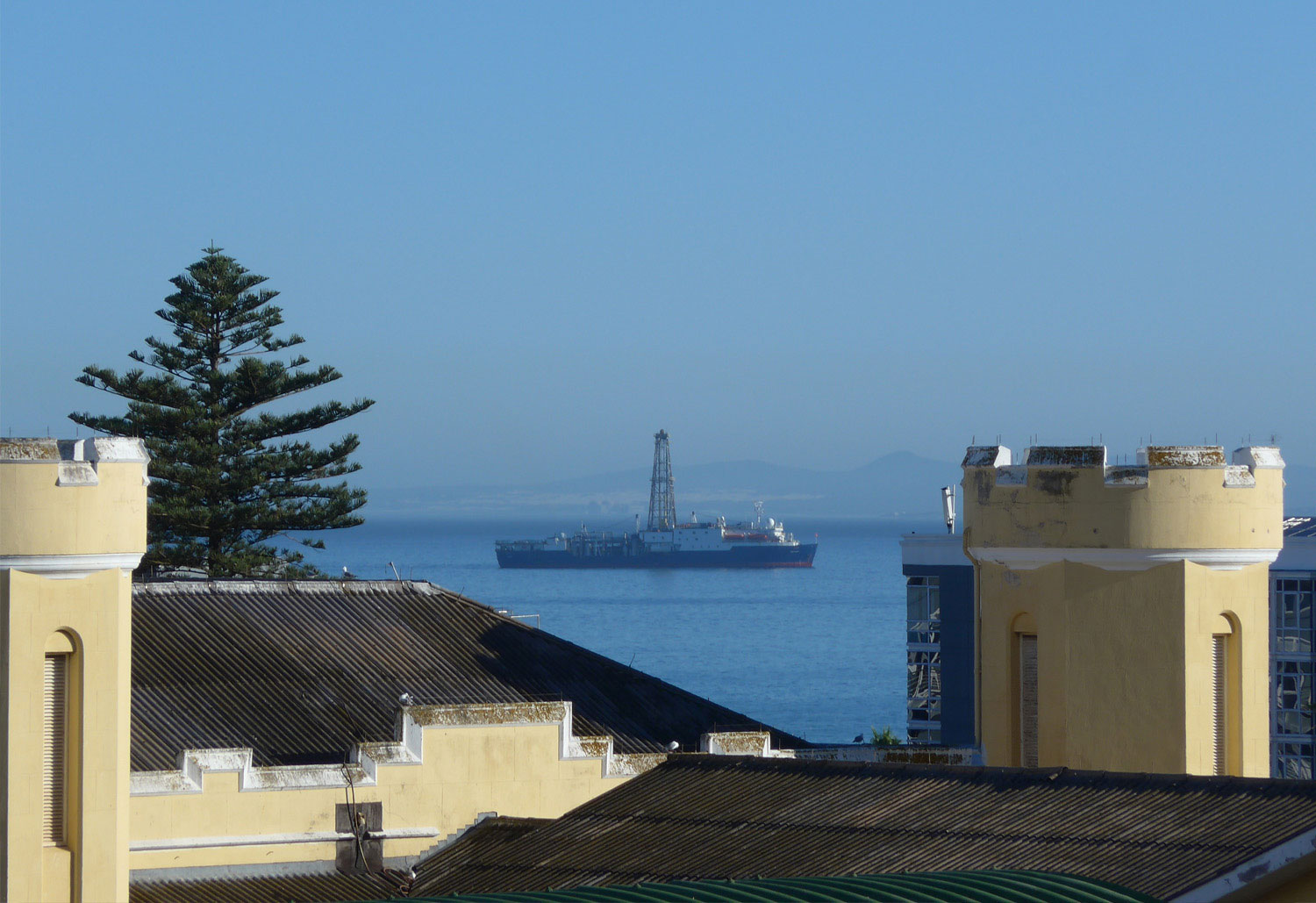 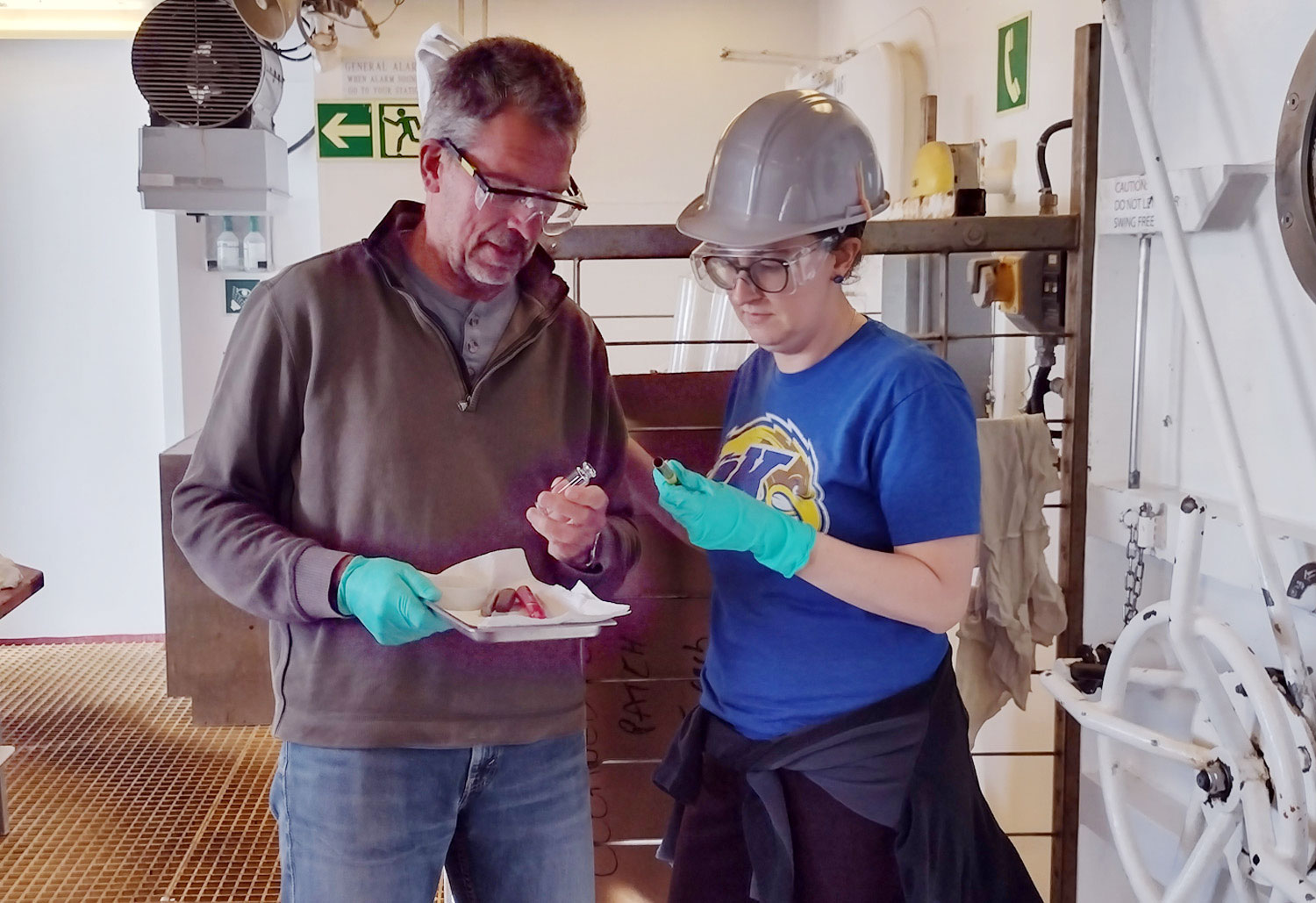 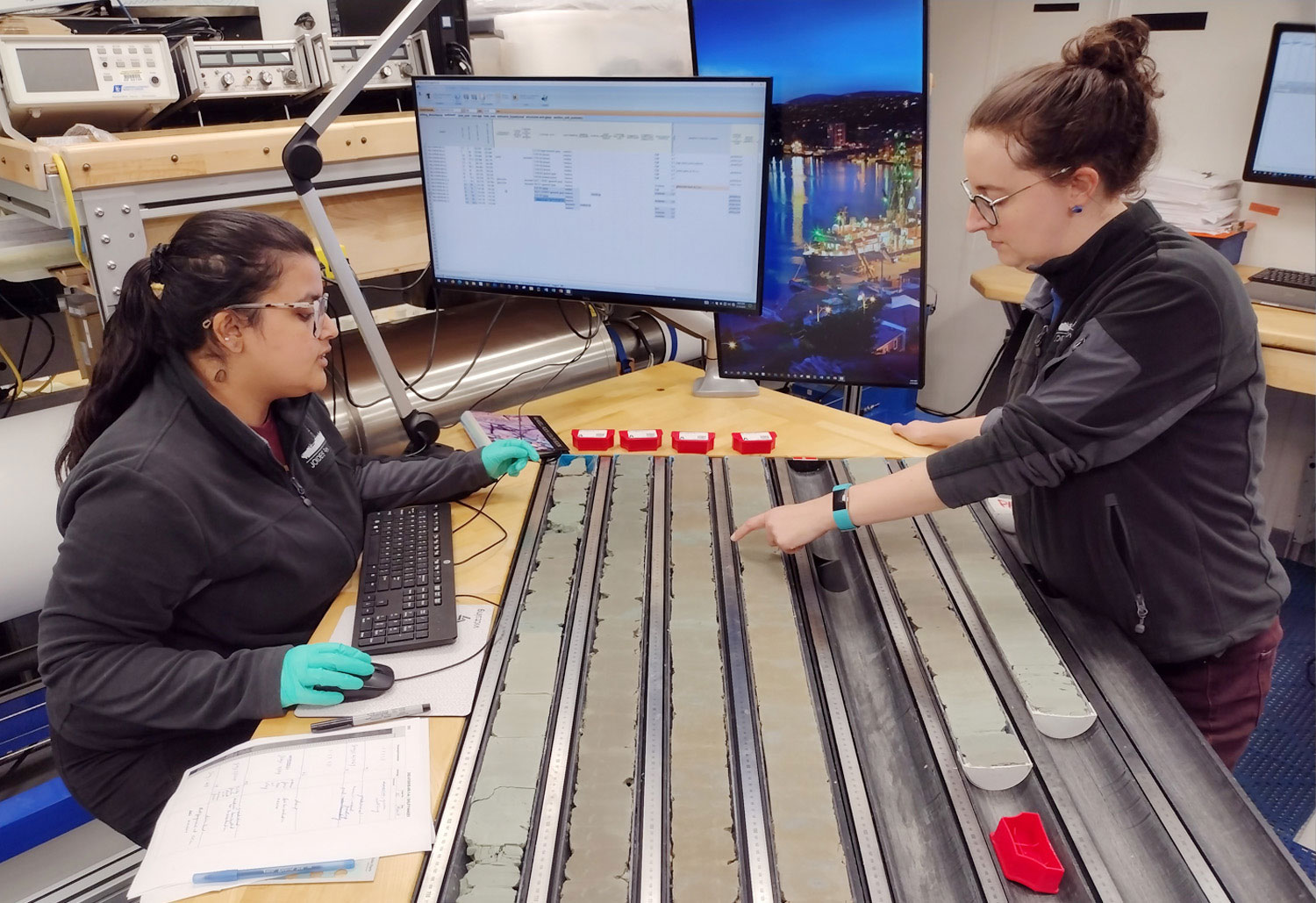 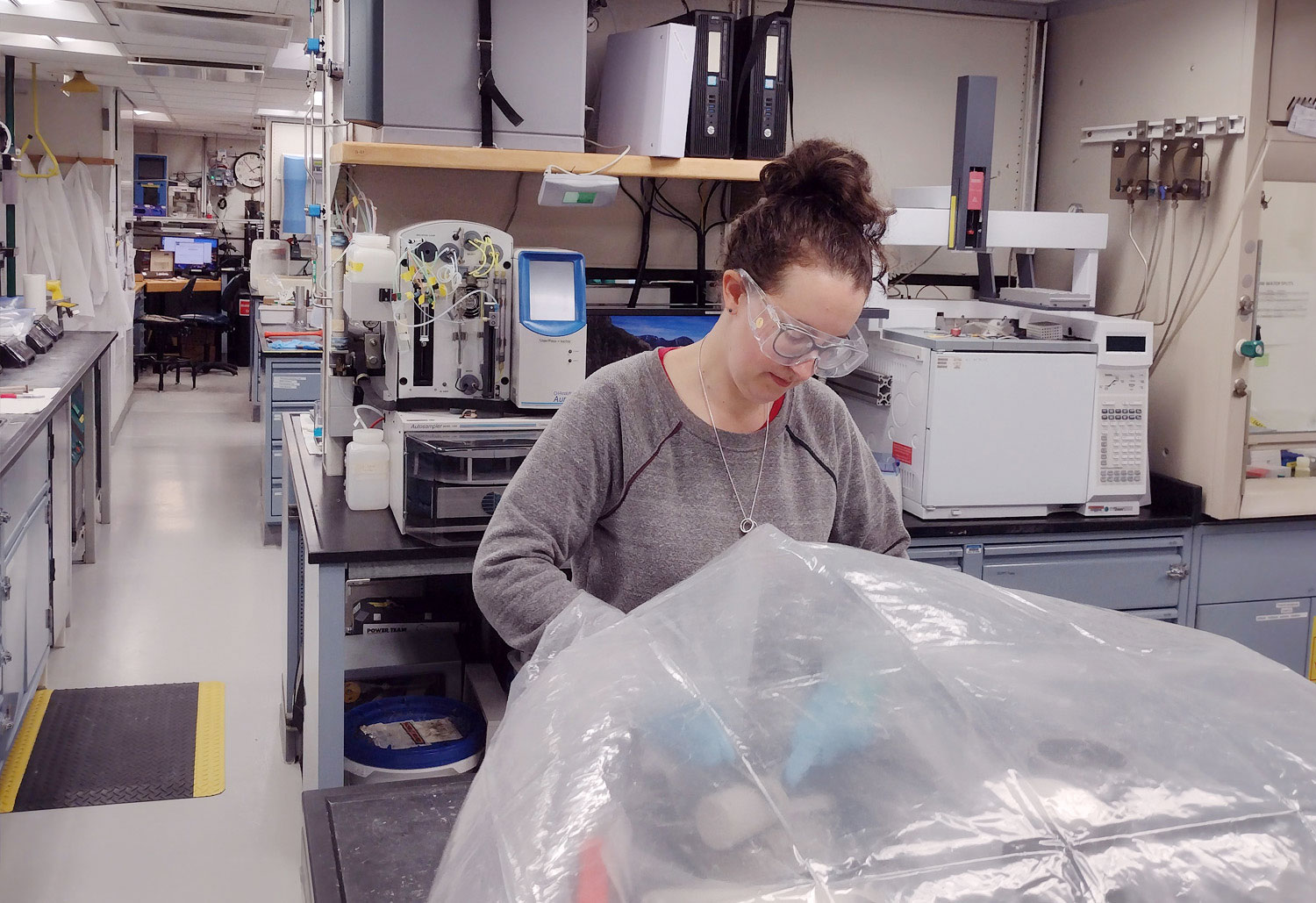 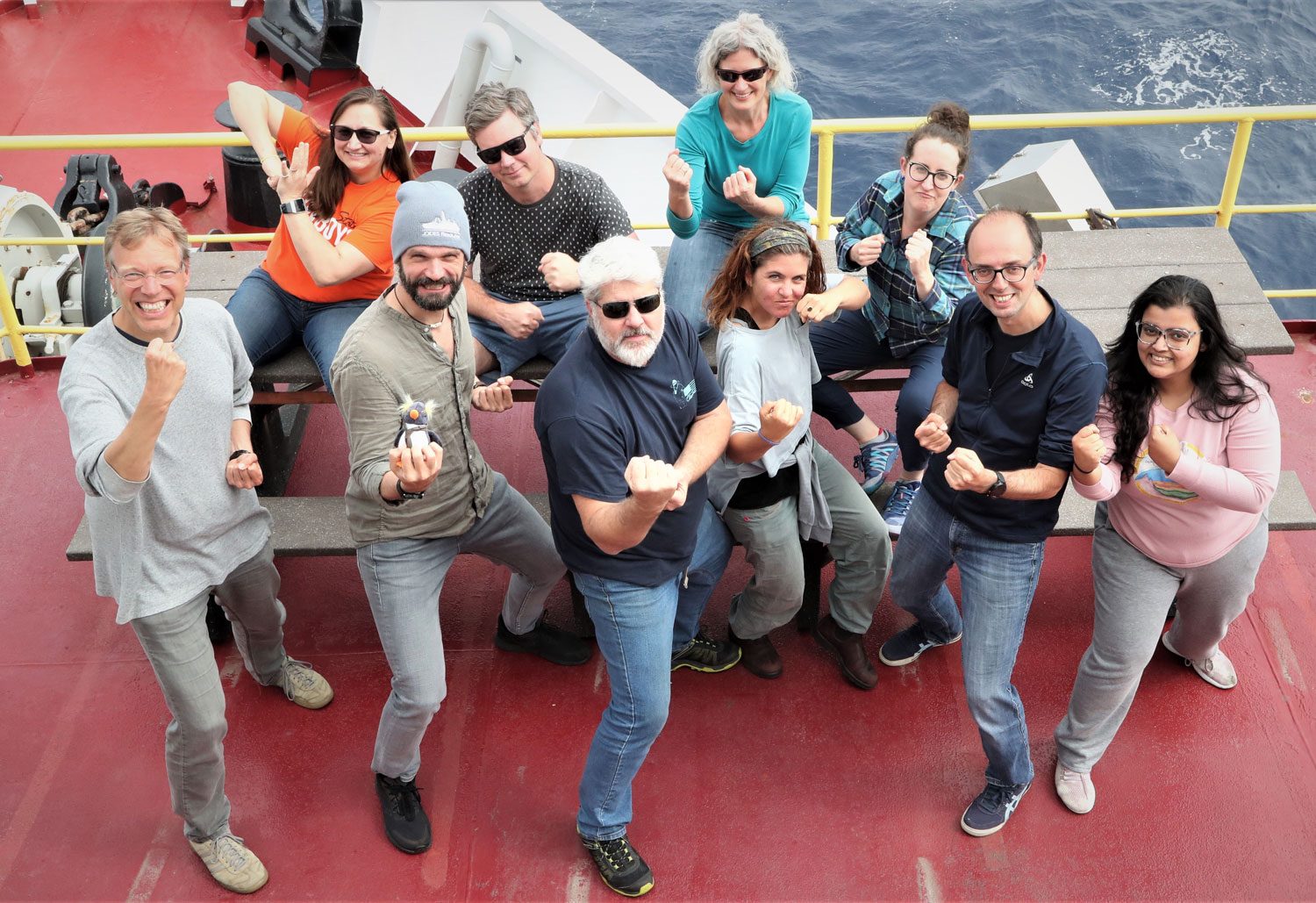