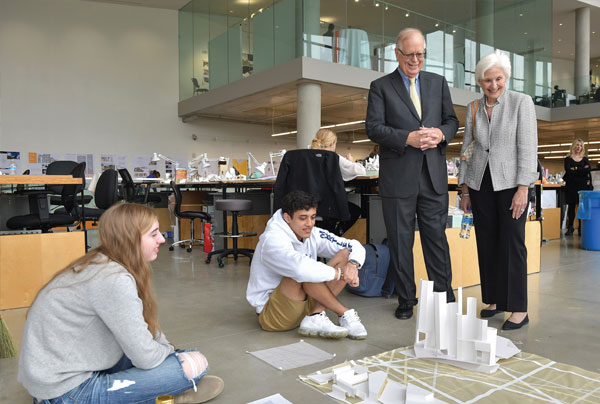 What’s in a Name

John Elliot, BArch ’70, Charleston, West Virginia, and his wife, Fonda, have been champions of the Kent State University architecture program and its talented students for more than two decades.

As a first-generation college graduate, Mr. Elliot recognizes the transformative effect higher education can have on an individual. His experience at Kent State opened a new world to him and fostered talents he never knew he had.

After graduating from Kent State’s architecture program, he went on to forge a successful career in nursing home facility design, management and ownership.

In 2018, the Elliots provided the largest total of outright giving in Kent State University’s history, surpassing  $12 million in outright and planned gifts that benefit the College of Architecture and Environmental Design and the Design Innovation Initiative.

In recognition of the Elliots’ generosity, the Kent State University Board of Trustees voted unanimously last fall to name the Center for Architecture and Environmental Design after John Elliot.

While other buildings throughout the university network have been named for individuals, most of them recognize past university presidents; this is the first academic building to be named in honor of a donor.

It is an appropriate tribute to a person who has given so much of his time and resources to foster the success of a new generation of architecture students.

They also funded programs that ensure student and faculty success, including the Elliot Scholars, the Elliot Family Foundation Architectural Scholarship and the Elliot Family Student Travel Fund, all of which support students in academic and extracurricular endeavors. And they established the John and Fonda Elliot Design Innovation Fellows and the John and Fonda Elliot Designer in Residence position as part of Kent State’s Design Innovation Initiative.

Mr. Elliot gives his time, as well. He has a strong presence at Kent State as a member of the Kent State University Foundation Board of Directors and Campaign Executive Committee. But his philanthropy to Kent State, both in time and treasure, is concentrated on one main goal: the success of the next generation of Kent State students.
—Bethany Sava, BS ’12