First Place on the Food Network 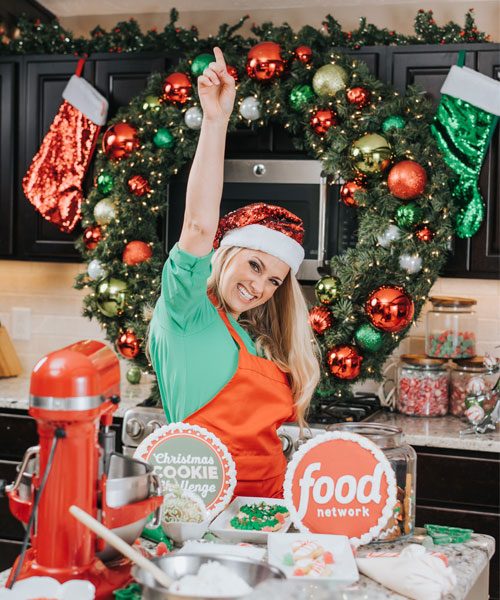 Leslie Srodek-Johnson, BS ’01, Sagamore Hills, Ohio, journalism graduate, mother of two and lead decorator and baker at Stan’s Northfield Bakery, considers herself a “small town girl” who never thought she would be on national television.

Then she received a call in December 2018 from a scout for the Food Network, who had seen her work on social media and wanted to find out more. After being vetted over several weeks, she was invited to be part of the third season of “Christmas Cookie Challenge,” which aired in December 2019. She competed in the episode, “Bright Lights, Big Cookies,” won the judges over in the first round with her cute Santa-beard-on-a-stick cookies—and ended up bringing home the big win and $10,000.

“It was an overwhelming experience. When they announced that I won, I was in shock,” says Srodek-Johnson, who has worked in her family’s Northeast Ohio bakery (started by her paternal grandparents, Stan and Helen Srodek, in 1961 and taken over by her father, Dave, in 1969) since she was in the fifth grade. She still works there with her mom, Kathie, every day.

Srodek-Johnson worked at the bakery while attending Kent State. Between the baking and decorating, she spent time with TV2 and says,“One of my favorite memories is co-hosting TV2’s “Desperate for a Date,” a dating show that aired from 1999-2001, with Jason Herron, BGS ’00, and Mike Polk, BA ’01.”

Appearing on a national television network was a lot more nerve-wracking. She was flown out to Los Angeles in February 2019, and for her episode, she competed with four other bakers from across the country. “It’s a lot of pressure to be on a national stage representing 58 years of your family’s legacy,” she says. “I didn’t want to let my family down. I was so nervous, I think I lost ten pounds—I couldn’t eat.”

She had to keep the news of her win secret until the episode aired on Dec. 16, 2019, but two weeks before it aired, she made a dozen of the Santa-beard-on-a-stick cookies and put them in the bakery. “Nobody seemed to care about them,” she laughs. “The night before the show aired, I decided to make about 200 of them just in case they were popular. Those were sold out by 8 am.”

Srodek-Johnson knows her grandparents would be proud of her, and she was amazed at the congratulatory messages she received from fans after the episode ran. “I cannot believe how many people that I have met through the years and that have moved all over the country . . . came together tonight to watch the show about the little blonde girl from the hometown bakery,” she wrote on Facebook.

She also received a handwritten letter of congratulations from Kent State President Todd Diacon—and a Certificate of Congressional Recognition and Achievement from congressman David Joyce in celebration of her win.

“I am super excited to have won,” she says. “It was validation for me that my dedication to my family and our family business paid off.”

The episode is available on-demand on streaming services, including Food Network’s website, Hulu Live and Sling.