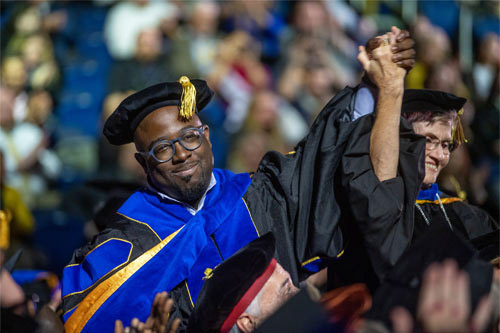 N.J. Akbar, PhD ’19, Akron, Ohio, was elected vice president of the Akron Board of Education a few months after finishing his doctorate in cultural foundations of education from KSU, where he also serves as an assistant dean in Kent State’s University College. It was his second time running for a position on the board.

Akbar grew up in poverty in a Detroit neighborhood that the website NeighborhoodScout once considered one of the most dangerous in the United States. “I saw drugs all around me,” he says. “I saw alcoholism, I saw poverty. I didn’t see a lot of success.”

As a child, he stuttered, spoke with a lisp and entered the third grade barely able to read. But his third-grade teacher at Harry B. Keidan Elementary School, Michele Deacon, took extra time with him and put him on a path to loving school. He earned a bachelor’s and master’s degree from Eastern Michigan University, served in the military, and was pursuing a doctorate in cultural foundations of education at Kent State when his mother passed away in 2017.

“I almost quit the program because I just went into a deep depression,” Akbar says. “I sent an email to my adviser and told her I was quitting.” But his dissertation supervisor, Vilma Seeberg, PhD, wouldn’t allow him to stop. “He said, ‘Okay, I can’t do it anymore,’” Seeberg recalls. “And I said, ‘Oh, yes, you can! You are not quitting. We’ll work this out. . . . Together we will work through this.’ And we did.”

Akbar says he ran for a position on the school board because “I want to make sure that there’s someone on our school board who understands what it’s like to succeed in education, but also knows what it’s like to struggle.” His goals for his tenure on the board are centered on community and on the children of Akron. He wants to engage and involve more community members, be as transparent with them as possible, and encourage the community to support Akron Public Schools, which, in part, means passing a levy. His long-term career goal is to become a chief diversity officer at a local university and maybe someday become the US Secretary of Education.

“I believe that failure is often medicinal,” Akbar says. “I’ve always learned through my failures. I always analyze what is it that I could do better. How do I come out stronger so that they never are able to beat me again?”—Danielle Wiggins, BS ’04, MA ’09, Bedford, Ohio. Adapted from an article first posted on wkyc.com on Aug. 17, 2019. Used with permission.