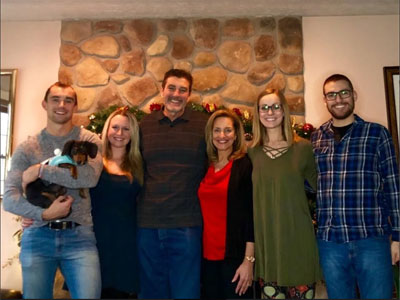 When the Antonczak family gets together for a family reunion, the theme is always the same—blue and gold. This flock of Flashes includes seven members who are all Kent State alumni, including three who married other Flashes.

Parents James Antonczak, BA ’80, and Michelle (Cligrow) Antonczak, BSN ’81, Olmsted Twp., Ohio, met their first week at Kent State in 1976 at an ice cream social during freshman orientation. Michelle was playing the piano when James walked over and told her she was a lovely pianist. Thirty-five years later, they are still a happy “Kiss on the K” couple.

James and Michelle’s son, Andrew Antonczak, BS ’08, met his future wife, Lisa (Thumm) Antonczak, BSN ’10, at the Zephyr Pub on a blind date in 2007 set up by a mutual friend while they were both in school. They were married in 2012. Lisa is a nurse practitioner and Andy is a pilot for Spirit Airlines, based in Ft. Lauderdale, Fla.

The Antonczak’s daughter, Andrea (Antonczak) Tyrell, BSE ’15, met her husband, Matthew Tyrell, BBA ’15, at Kent State, as well. They met online when Andrea noticed a picture of Matt sitting in a Kent State airplane. (Brother Andrew was Matt’s flight instructor.) Their first date was at Taco Tonto’s, topped off by the visit to the Victory Bell on the KSU Commons. Both graduated in 2015 and were married in 2016. Andrea is a children’s book author, and she and Matthew are also both employed at Texas A&M University, College Station, Texas. Finally, James’s brother, John Antonczak, BS ’66, was a proud KSU alum who worked for more than 40 years as an aeronautical engineer in General Electric’s Aircraft division, before passing away in 2018.

The Antonczak family still enjoys participating in activities at Kent State—walking the grounds of the Kent Campus, visiting facilities like the May 4 Center and joining in on university events like the Bowmen Cup 5K. This family is the epitome of “Flashes Forever.”—Deb McGuinness, BA ’78