A new MuseLab exhibit explores how beauty is defined by Kent State researchers from different academic backgrounds who use various forms of data visualization. Here’s a glimpse at some of the submissions.

We don’t often think about words, numbers, measurements or any of the other pieces of information that we consider “data” as beautiful. Yet, look around you. Our entire world is built using data—and it’s beautiful.

Is it possible to compile those data and transform them into something beautiful?

Can the data themselves be considered beautiful?

For this exhibit, we set out to find the answers to these questions by asking Kent State University researchers from all fields of study to submit visuals created from data gathered during their own work or research.

Such work is often referred to as a “data visualization,” broadly defined as “a term that describes any effort to help people understand the significance of data by placing it in a visual context” (Nabler Digital Analytics Company, 2014). The focus of this exhibit is influenced by Nabler’s definition.

Open your mind and eyes to the various forms of data visualization and discover the ways researchers from different academic backgrounds define beauty.

Collagen Fiber Orientation of the ACL

These images demonstrate collagen orientation in the anterior cruciate ligament (ACL) of a bonobo [pygmy chimpanzee]. We use a polarizing filter to bend light through our tissue sample, and then we separate the resulting light into different components that tell us about its makeup and orientation. These data are then given to us as a false-color image, depicting the direction of each fiber. We use these data to learn more about the evolution of the knee. 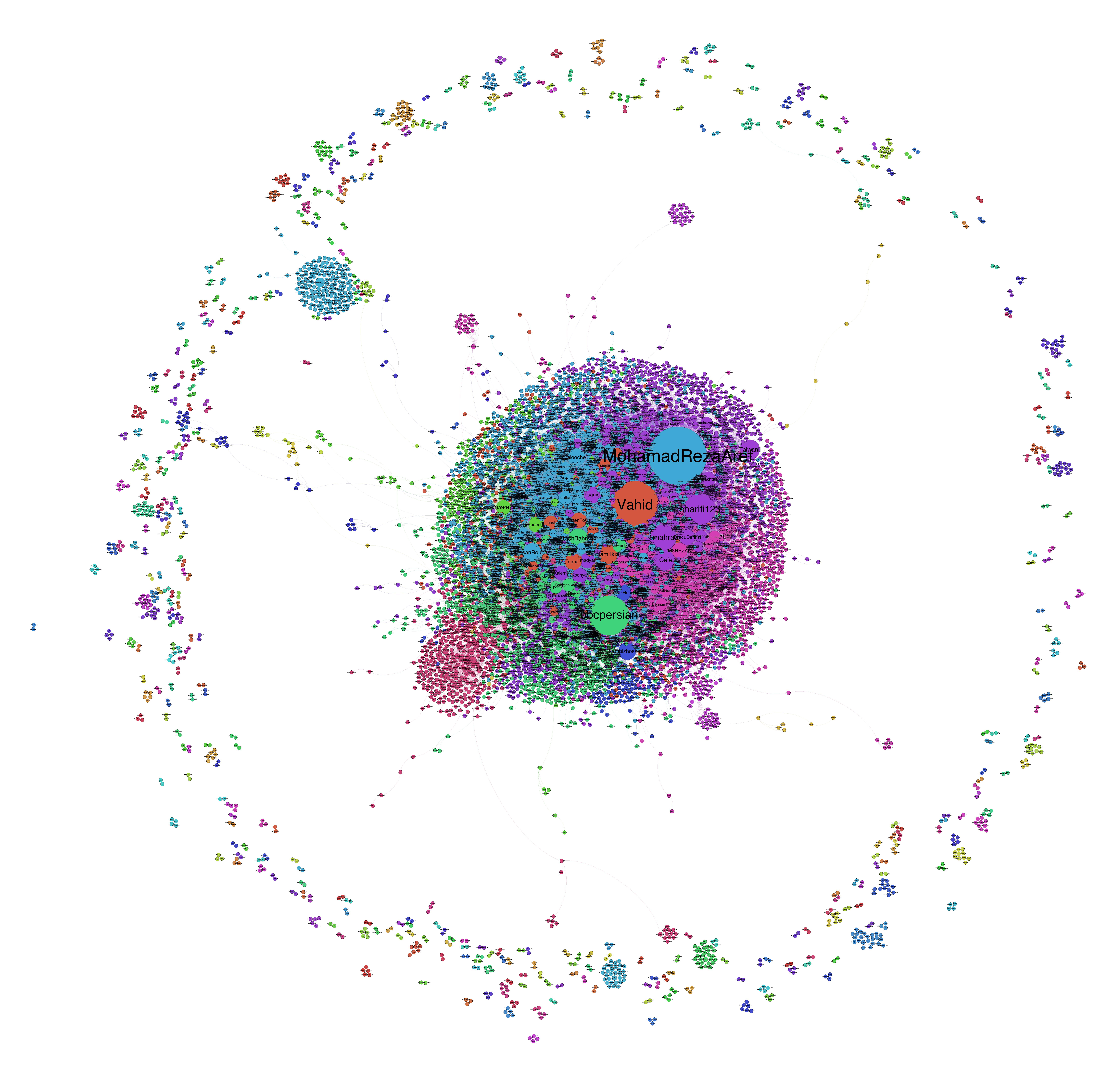 In this project, we studied the flow of information and social influence among Iranian Twitter users during Iran’s 2013 presidential election. Our goal was to understand the difference between the most influential users (defined by network centrality) in information diffusion network and the most vociferous users (those who tweet the most). This visualization nicely reveals the difference between influential and vociferous. Node size represents the importance of users in an information diffusion network. But the users with the highest number of tweets are located in the pink tightly clustered group on bottom left of the core, which is an isolated clique. 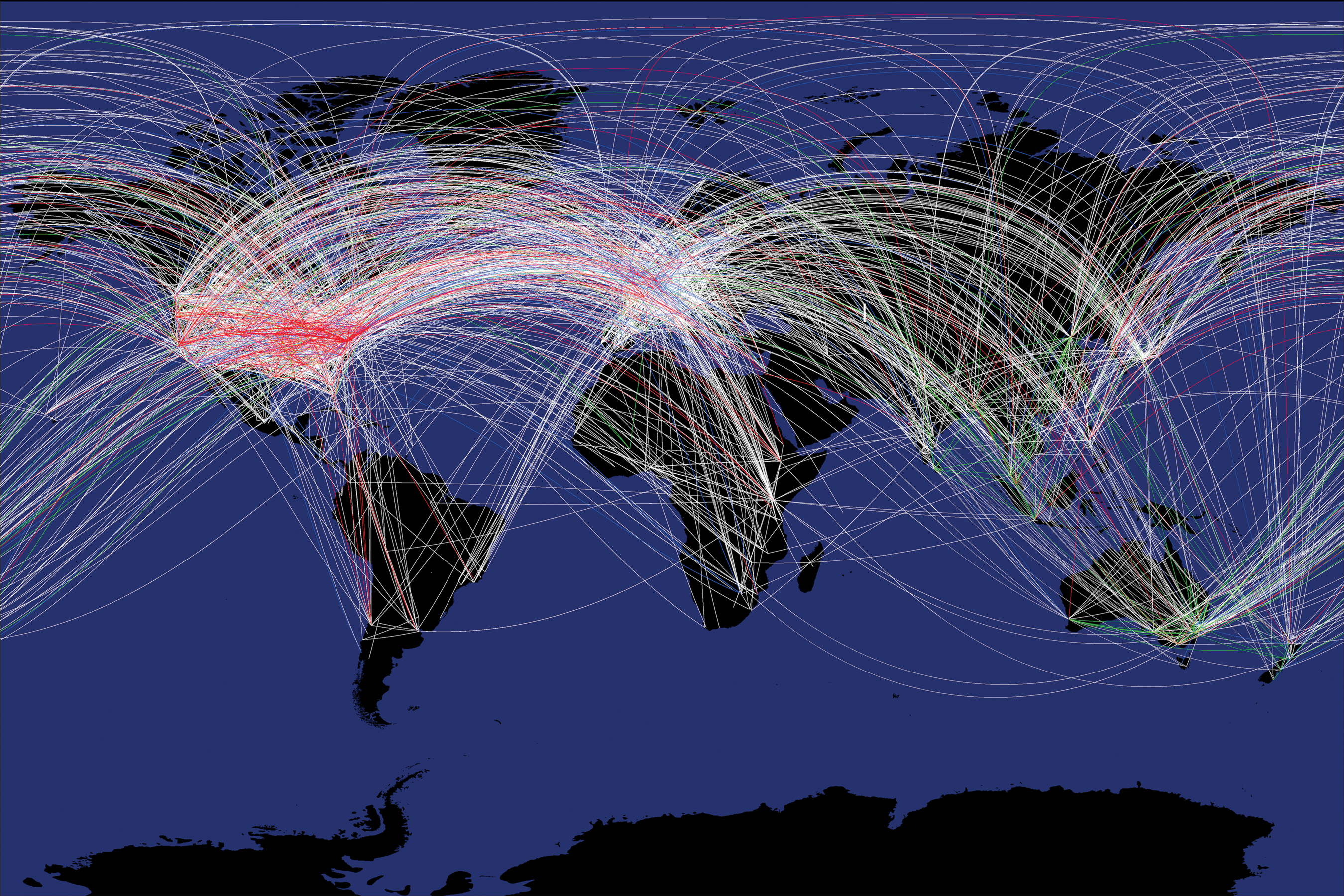 Visualization of Academic Collaboration in Environmental and Resource Economics

This is a visualization of international collaboration among scholars in the research field of environmental and resource economics. The addresses of the researchers’ institutions were extracted from affiliations data of 9,000 articles published in 20 journals between 2001 and 2010. Red, green and blue lines show collaboration in the top three journals in the field. White lines show collaboration in the rest of the journals. The ArcGIS software was used to visualize the relationships.

Beauty of Data is on exhibit at the MuseLab wall gallery, Kent State University School of Library and Information Science, 3rd floor of the University Library, through fall semester 2016.

Visit the MuseLab blog to read posts about the making of the exhibit and view visualizations from Kent State researchers in anthropology, art, biological sciences, fashion, geography, geology, library and information science, and visual communication design.

Learn more about MuseLab at www.kent.edu/slis/muselab.