Mahwish Chishty stands in the center of a small exhibit space she has mocked up in her studio at Kent State’s Center for the Visual Arts. Its four walls, covered in shiny mylar emergency blankets—the kind given to refugees and survivors of disaster—reflect back her image, multiplying it.

Mounted on the walls are 3 ft. x 3 ft. square stainless-steel panels, their mirror finish painted with black dots that appear as random patterns when seen up close, then resolve into children’s faces when viewed from a distance.

The Pakistani-born artist and assistant professor in the School of Art is pondering how she’s going to exhibit her latest project—the culmination of the prestigious John Simon Guggenheim Memorial Foundation Fellowship she was awarded for exceptional creative ability in the arts in 2017. (Ms. Chishty, who received a President’s Faculty Excellence Award from Kent State in 2018, has had more than 50 national and international exhibitions in the past 10 years, including a solo exhibition at the Imperial War Museum of London, and a group exhibit featuring top artists’ responses to war and conflict since 9/11.)

The abstract images on the stainless-steel panels portray some of the children she has been working with during her fellowship, as part of a project she calls “Basant: Let’s Go Fly a Kite.”

“Basant is an annual kite festival that takes place to mark the start of spring and is celebrated by people of all faiths in Pakistan,” says Ms. Chishty, who was born in Lahore, Pakistan, and grew up in Saudi Arabia before becoming a U.S. citizen (she has dual citizenship). “Children fly kites to mark the auspicious occasion by holding competitions. In Pakistan, the sky is filled with colorful kites of various shapes and sizes in the month of February.”

Using the funds she received from the Guggenheim fellowship, which she chose to receive over two years because of her project’s timing, Ms. Chishty is facilitating a kite exchange between schoolchildren who live close to contentious border crossings—at the U.S./Mexico border between San Diego and Tijuana, and at the Pakistan/Afghanistan borders.

“Pakistani areas that border Afghanistan remain risky for children to enjoy any sort of outdoor activity,” says Ms. Chishty, noting that because of drone strikes conducted by the CIA since 2004 to target terrorists along the Afghanistan border, unofficial reports suggest that hundreds of Pakistani civilians have been killed in northwest Pakistan—and up to 200 of them were children. Amnesty International, in 2013, invited drone strike victims and their family members from Pakistan to come to Washington, D.C., and tell members of Congress what it is like to live under the constant fear of drone attacks.

One 13-year-old boy told how he had been helping his grandmother harvest crops in a field when a drone appeared in the bright blue sky and suddenly fired—wounding him in the leg with shrapnel and killing his grandmother. “Now I prefer cloudy days when the drones don’t fly,” he said. “When the sky brightens and becomes blue, the drones return and so does the fear.”

Ms. Chishty says his testimony inspired her most recent project. Besides calling attention to the plight of Pakistani civilians, she wants Pakistani children to be able to play outside and fly kites on cloudy days when drones don’t typically operate (because their cameras can’t visually identify the targets). To allow for variable climate conditions, she’s had to replace the local Pakistani kites—made of thin paper and wooden sticks that could tear or become weak in misty weather—with sturdier, more weather-resistant materials.

In March 2018, she conducted a kite-making workshop with children from the Roosevelt International Middle School (a school near the U.S./Mexico border), hosted by the Spanish Village Arts Center in San Diego. The children, many of whom are from other countries, designed and painted plastic kites to be given as gifts to children in Pakistan.

Then in April, she visited the border areas of Pakistan and gave children there the durable kites made by the children in San Diego. She hopes this will allow the Pakistani children to fly kites on cloudy days and “reclaim their space.” At Sonia Shah Memorial School in Kangra, a small Pakistani town near the border of Afghanistan, she worked with a group of mostly girls, who designed and decorated kites for the children in San Diego to fly.

Ms. Chishty plans to bring those kites with her to California in February 2019 to exchange with the children in San Diego. And she hopes to hold a Basant kite-flying event in the two countries at the same time that will be shared live at both borders simultaneously via Skype.

“My hope is to shorten the distance between these border conflict areas,” she says, “and allow for a more personal connection.” 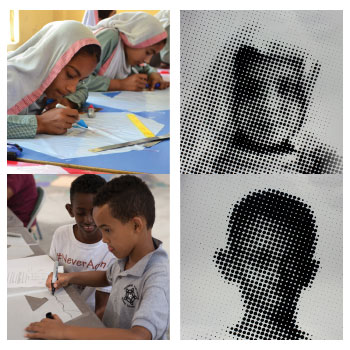 Making a personal connection is a driving force behind many of the projects seen at Ms. Chishty’s studio. Trained at the National College of Art in Lahore, Pakistan, as a miniature painter in the style of the Mughal empire of the 16th and 17th centuries, she has adapted that traditional technique to contemporary themes—at first exploring her own identity as both Pakistani and American, and then expanding her perspective to take in a broader view.

On one wall of her studio she’s tacked up small detailed paintings on individual sheets of paper, each depicting a moment from the elaborate flag-lowering and border-closing ceremony that security forces on either side of the Wagah/Attari (Pakistan/India) border have followed since 1959—after the British withdrew from the area in 1947 and it was partitioned into two independent countries: India (mostly Hindu) and Pakistan (mostly Muslim).

Performed daily before sunset and witnessed by hundreds of visitors and international tourists from both sides of the Wagah/Attari border, the well-rehearsed soldiers of both Pakistan and India attempt to outdo each other with high kicks and intimidating glares in a military drill that symbolizes both the rivalry and cooperation between the two nations. In recent years, border skirmishes have escalated tensions between Pakistan and India and added an edge to the display of force. 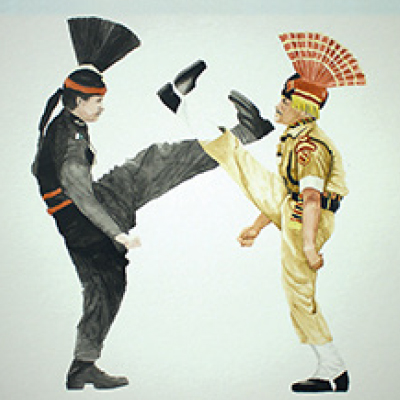 Hanging from the ceiling in another area of the studio are brightly painted drone models Ms. Chishty bought to photograph from different angles. She captured their silhouettes for a series of drone paintings that she created after finishing graduate school at the University of Maryland, College Park, and visiting family in Lahore in 2011. Her family and friends there were all talking about the drone war raging along the border with Afghanistan, so she decided to reimagine the drones using Pakistan’s colorful truck art tradition—drivers there decorate their trucks with brightly painted images of spiritual gurus, political figures and popular culture.

“I wanted to find a way to make this topic [of drone warfare] visible, to attract attention with the colors and shapes,” says Ms. Chishty, who painted images of drones decorated with her own version of indigenous truck art. “I wasn’t trying to say drones are good or bad; I just wanted to highlight what they are and get people outside of Pakistan to talk about them.”

Elsewhere in the studio are full dome mirrors—the kind typically mounted on the ceiling and used for security in stores and warehouses. But these domes are wired with speakers and suspended upside down from the ceiling at various heights, meant to represent the height of Pakistani men, women and children killed in drone strikes. They are part of a sound installation Ms. Chishty calls “Naming the Dead,” which was recently exhibited at SPACES gallery in Cleveland, Ohio, and at Art Prize in Grand Rapids, Michigan. She borrowed the project’s name from the title on a list of Pakistani civilian casualties compiled by The Bureau of Investigative Journalism, a nonprofit research organization based in London, England, who worked directly with local news media in Pakistan to make sure the information was accurate.

Ms. Chishty approached Americans of the same age and gender as the Pakistanis named on the list and asked them to read aloud those names for her to record—and to hopefully start a dialogue. Even when some of the people refused, she says, “I thought, well, at least I have told somebody that this is what’s been happening in that part of the world.” Visitors to the exhibit can step under the domes and listen to audio of American citizens reading the names of Pakistani casualties. 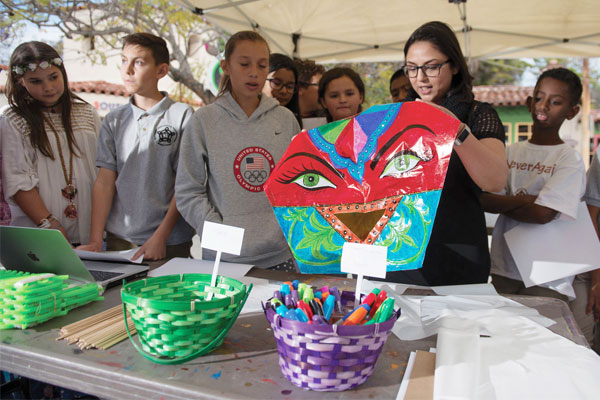 Sound installations and kite-flying events may seem a long way from miniature paintings, but all are ways to connect people and ideas. “I’m not limiting myself to material anymore,” Ms. Chishty says. “I start with an idea and then explore the best method to convey that message. Right now, I’m exploring these borders in my own way.”

And that includes putting visitors inside a reflective room and having them step back to get a good look at the faces of children, from both Pakistan and the United States, who peer out from mirrored panels.

Says Ms. Chishty: “I am confronting the viewer in the present environment to reflect upon the future.”

See www.mahachishty.com for more of her work.