Adapted from the exhibit catalog, The Great War: Women and Fashion in a World at War, 1912–1922, by Sara Hume, and a related lecture. Posters courtesy War Posters Collection, University of Minnesota Libraries. Photographs by Joanne Arnett and Vanessa Port. 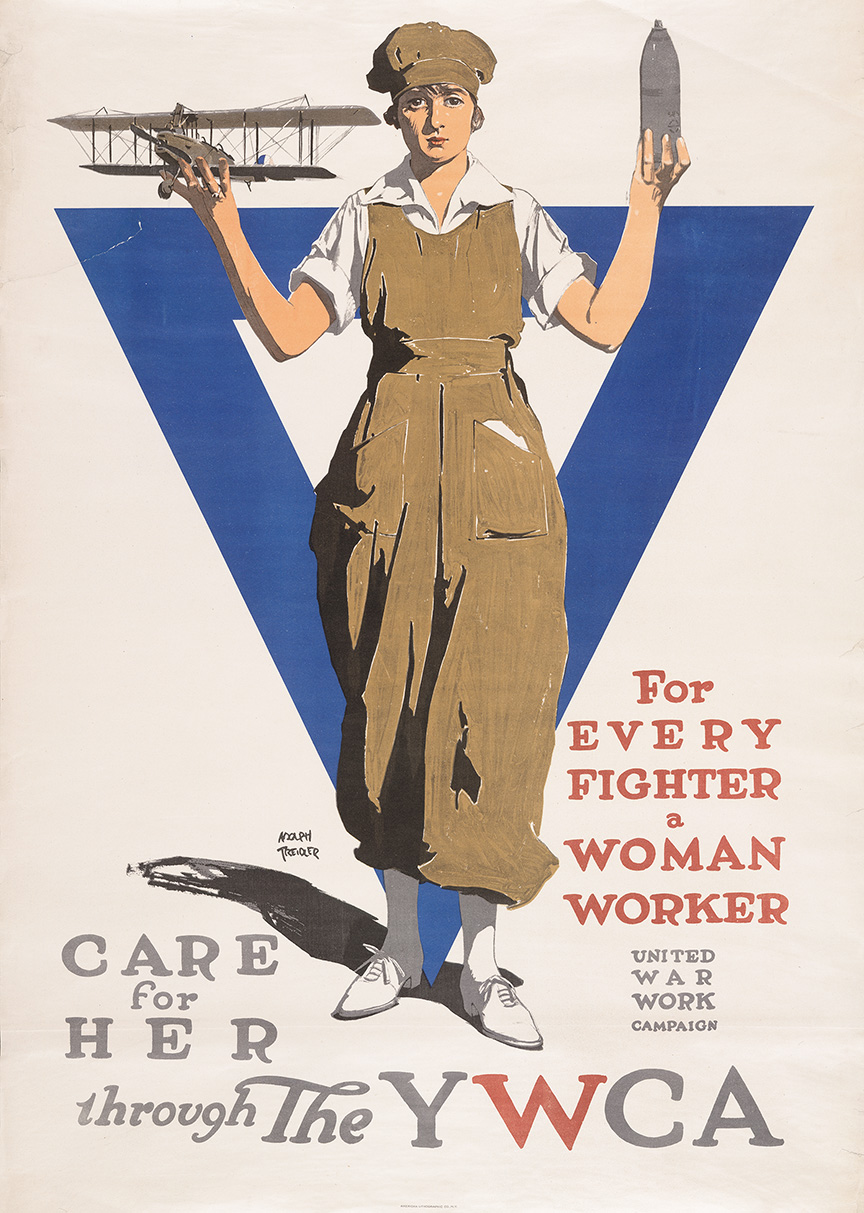 The popular PBS series Downton Abbey and the recent 100th anniversary of the start of World War I have sparked people’s interest in the fashions of the era. While fashion trends may be perceived as trivial and transient, “dramatic changes in women’s fashions during World War I reflect the profound social and cultural shifts that resulted from the war effort,” says Kent State University Museum curator/assistant professor Sara Hume. An exhibit she curated at the museum—The Great War: Women and Fashion in a World at War, 1912–1922—uses propaganda posters and pieces from the museum’s collection to explore the transformation of American women’s roles and dress during World War I (1914–1918) and its immediate aftermath.

The war—which resulted in the death of approximately 10 million soldiers, most of them young men—expanded women’s opportunities to participate in politics, society and the workforce. As women gained influence and took on traditional male roles, including farming, factory work and military service, they made great strides toward equality. Soon after the war’s end, women in the United States, Canada and several European countries gained the right to vote. While many of women’s inroads into the workforce were reversed once the war ended, the fundamental changes in women’s fashion endured.

The Great War was a transitional period for society, and the changing silhouettes in women’s fashions from the 1900s to the 1920s reflect that in-between time, notes Hume. “The transition is awkward; the proportions are a bit off, and the trimmings hang funny,” she says. “The ‘teens’ were an adolescent, gangly period.”

The following selection of items from the exhibit (which runs through July 5, 2015) highlights several key influences that transformed how women dress—and continue to be factors in fashion today. 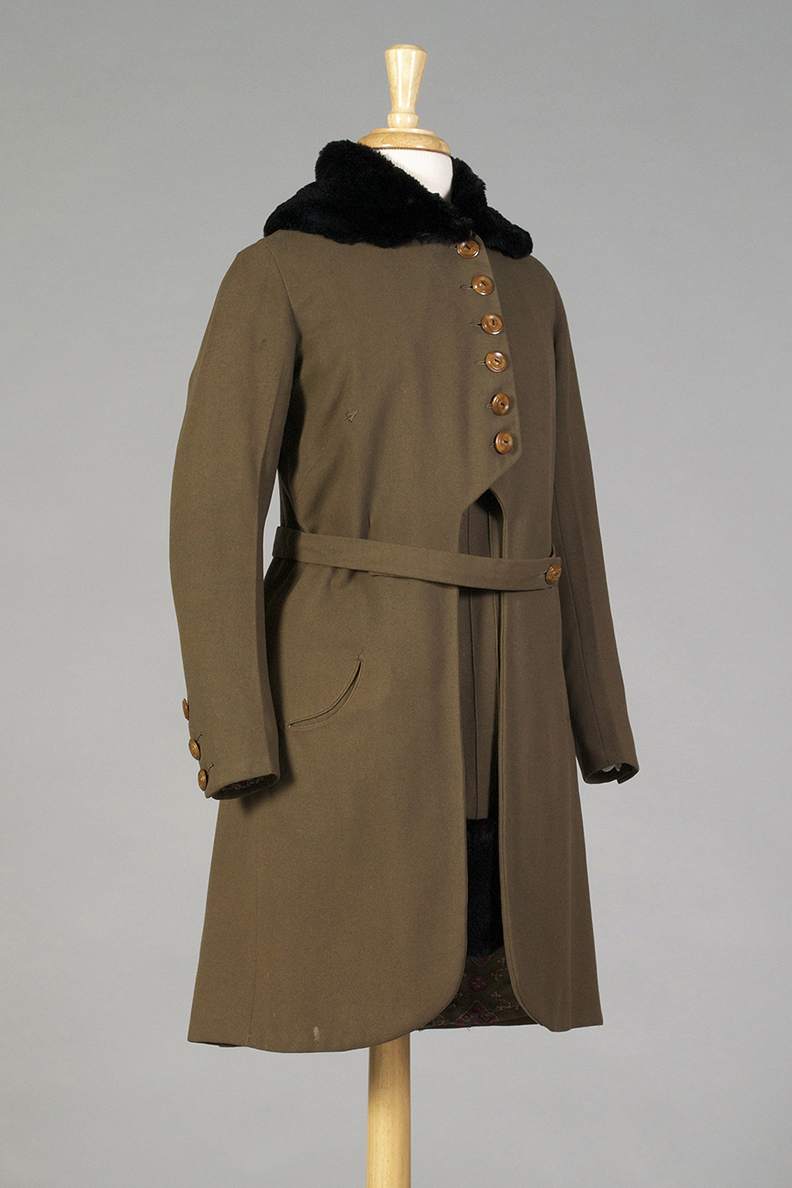 The United States felt the war’s impact well before the country entered combat in 1917. Prior to the war, fashion styles originated in Paris; but as transatlantic communication and export grew more difficult, the New York fashion industry developed greater autonomy. Many of women’s new occupations required them to wear uniforms, and military designs and drab colors influenced civilian fashions. The trench coat, introduced in this period, became a classic that continues to this day.

Women’s sportswear also drew inspiration from nautical styles: Middy blouses worn as a part of women’s gym suits were almost identical to those worn by sailors in the Navy. Elements such as sailor collars became popular not just for athletic wear, but for fashionable dresses and blouses. 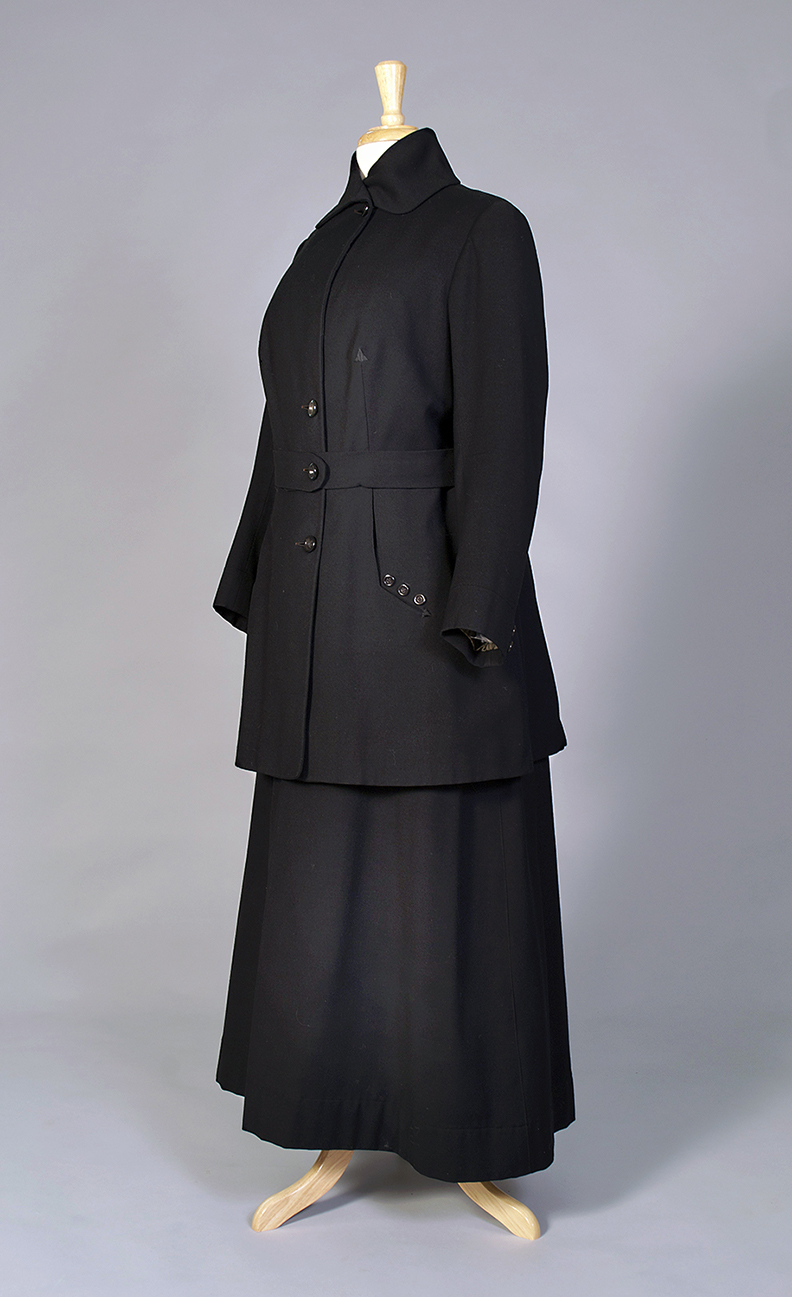 As women entered the workforce and joined the fight for women’s suffrage, they adapted some of men’s tailoring techniques and styles; throughout the 1910s women’s clothing increasingly featured tailored suits. From 1912 to 1914 suits were feminine with an emphasis on the slim figure; however, in the second half of the decade, the silhouette became wider and deemphasized the waist. 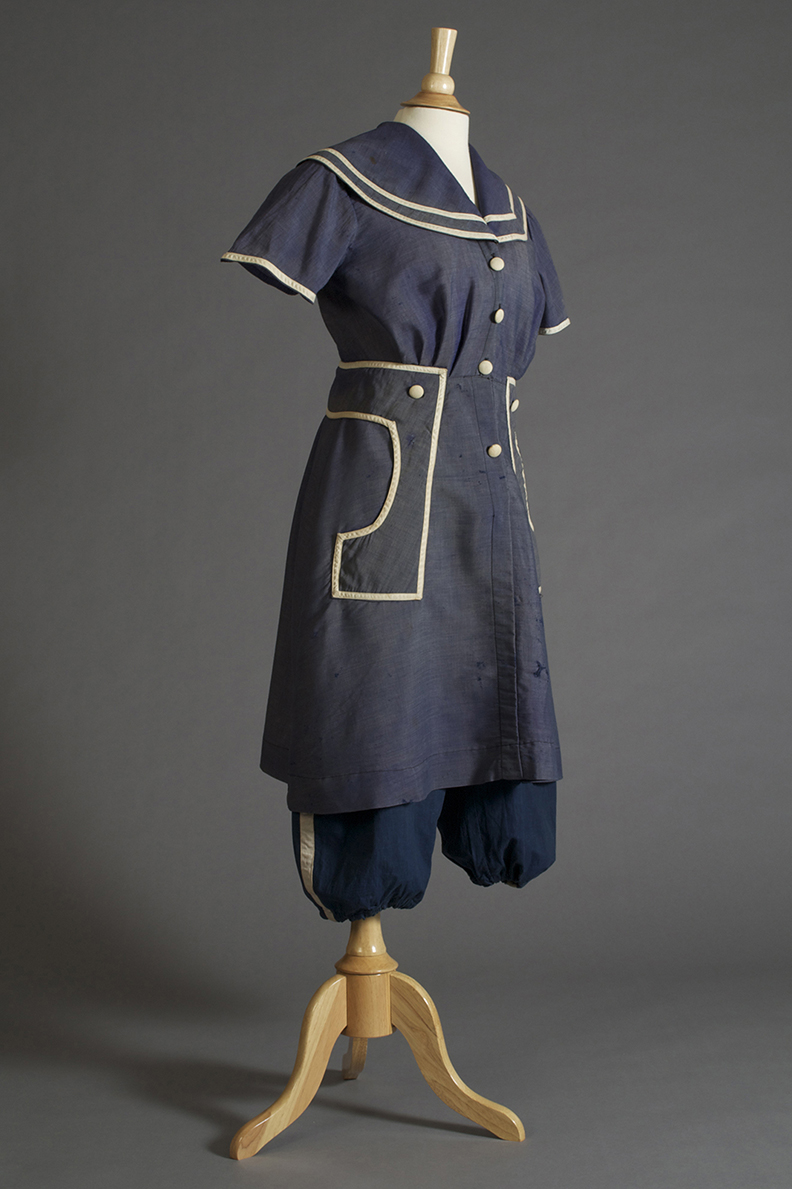 Physical education for women was introduced in the mid-1800s, influenced by educational philosophies brought to America by European immigrants. Women at Smith College began playing basketball in 1892, the year after it was invented; because it was played indoors, they were permitted to wear bloomers instead of the skirts they wore for outdoor sports. Untucked middy blouses, adopted around 1910 for use in women’s gym suits and basketball uniforms, created the straight, waistless silhouette that dominated women’s fashion through the 1920s. 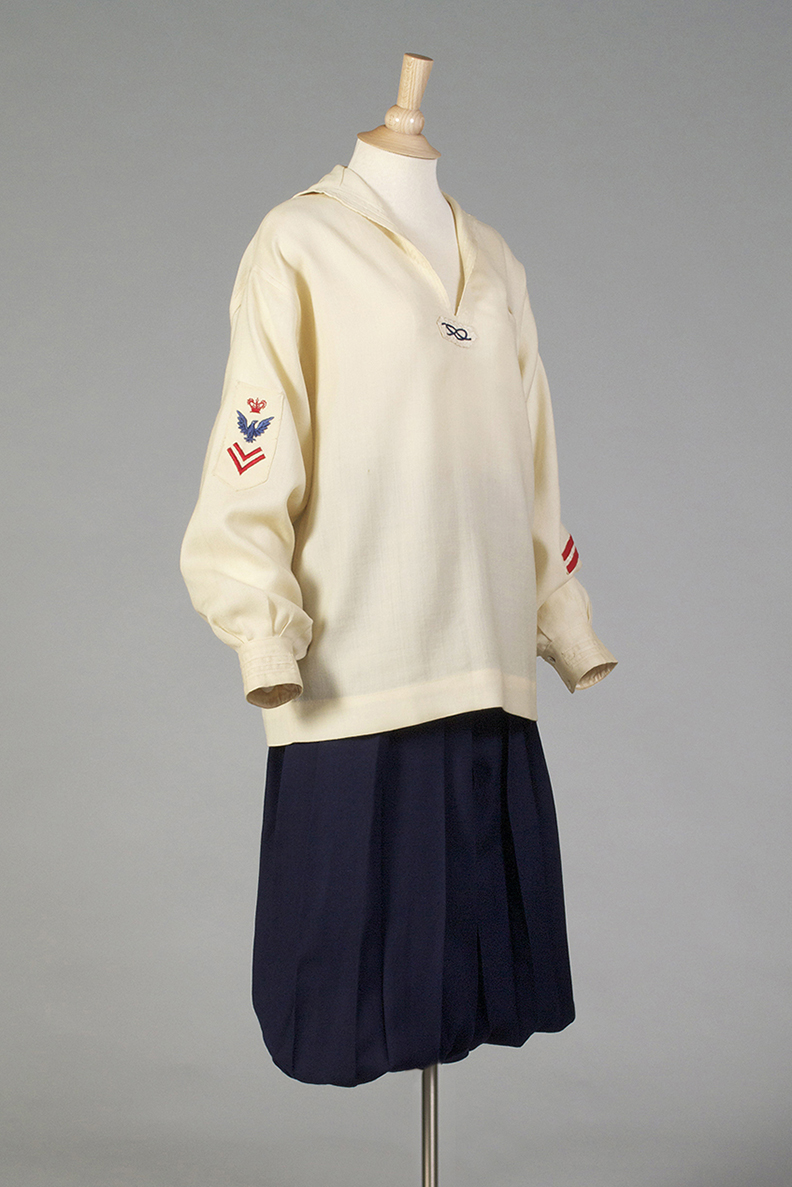 The more relaxed attitude towards gender-specific clothing, combined with the more active lifestyles of women, introduced what we think of today as sportswear. Swimming became an athletic activity rather than simply a leisure pursuit. Bathing costumes for women evolved from cumbersome layers—which included bloomers, overdress, cap, stockings and shoes— to more streamlined suits that actually enabled women to swim. 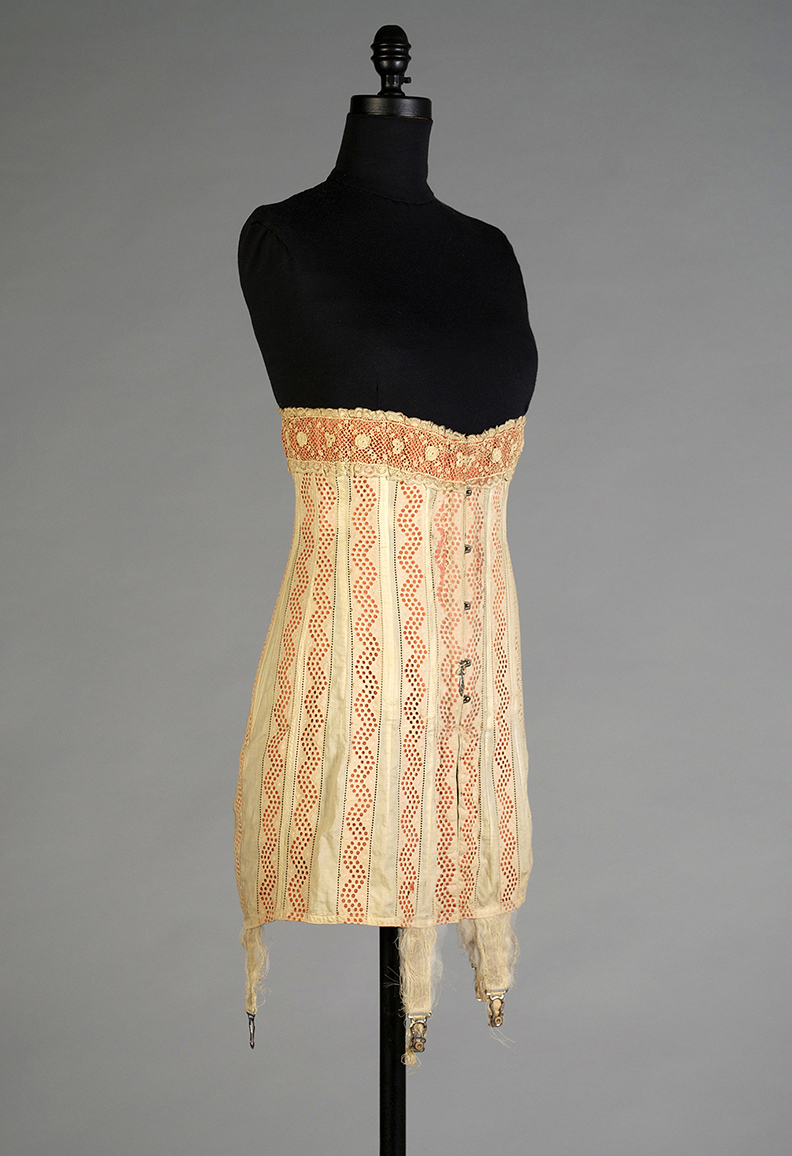 As women began to shape their bodies through exercise, many young women who had grown up with less restrictive clothing never adopted the corset. Although American women continued to wear corsets throughout the war years, the War Industries Board asked them to give up purchasing new corsets so that steel could be used in the war effort. Elastic panels gradually replaced the heavy steel boning, and the corsets of the early 1920s weren’t as long or stiff as their predecessors.

To achieve the slim, columnar styles fashionable between 1910 and 1914, women wore corsets that extended well down the thighs and sought to maintain a smooth, tubular shape rather than to cinch in the waist. By the early 1920s, the fashionable silhouette had broadened and clothing was sized to fit more loosely. 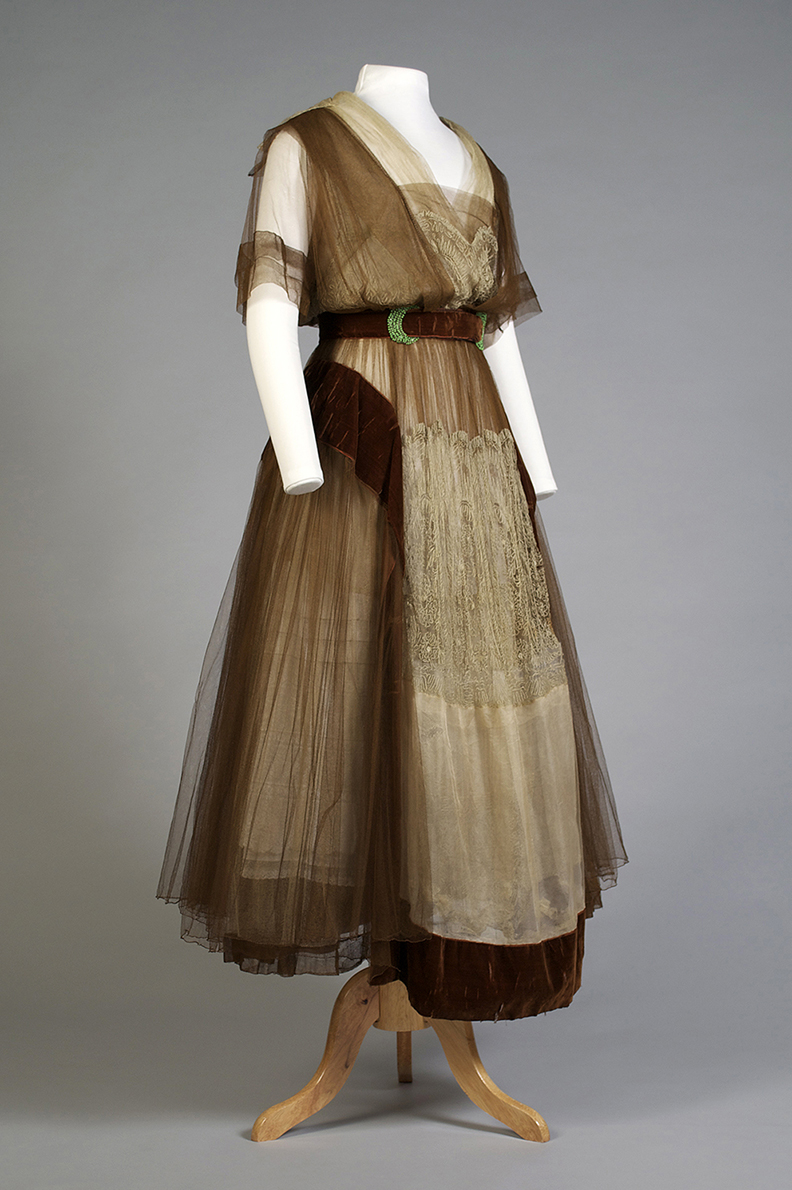 Fashions on the eve of war were long and slim. Skirts reached the floor and, in their most extreme, tapered towards the ankle in a “hobble.” As the decade progressed, skirts became shorter to allow more freedom of movement. In seeming defiance of expected restrictions on clothing, skirts also became very full in a style known as the war crinoline, which emerged in the spring of 1915 as an effort to bolster the fashion industry. 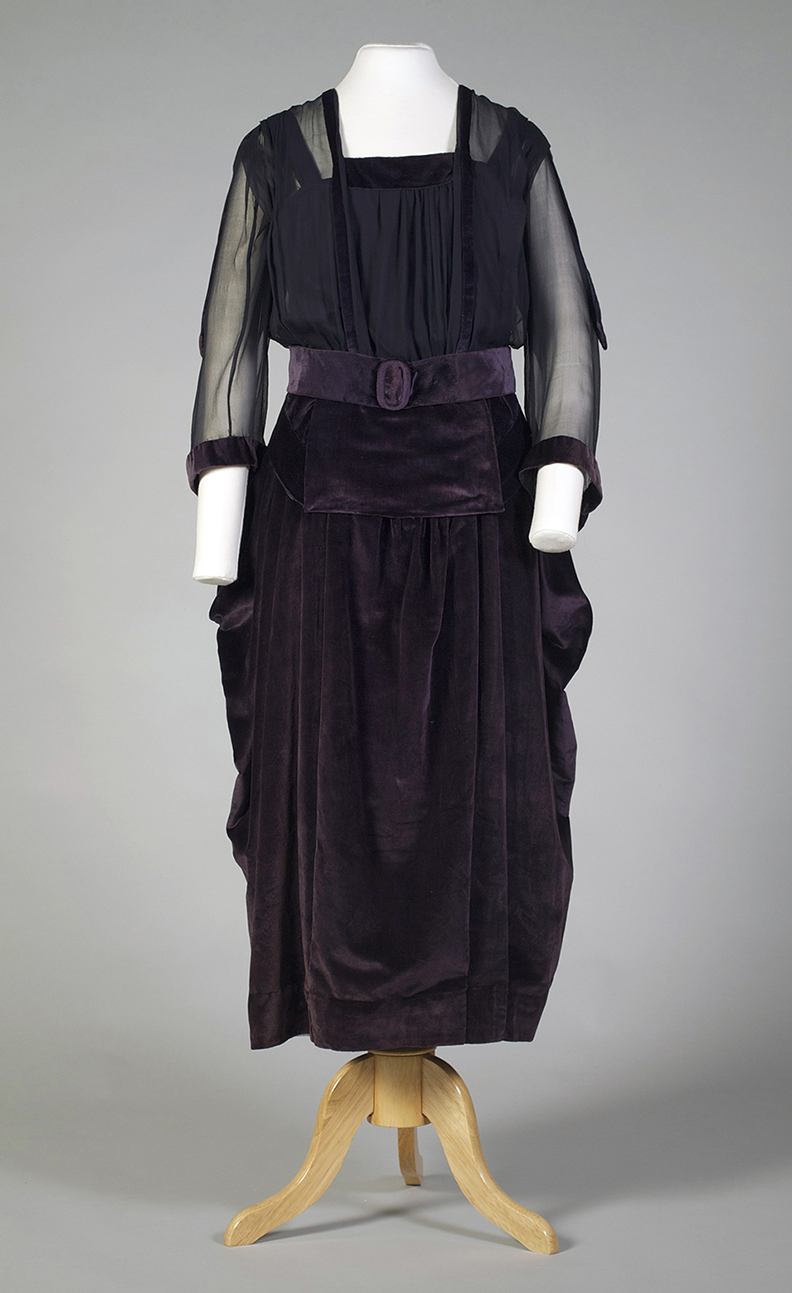 By 1918 skirts had narrowed once again, hemlines fell to below the calf, and the overall silhouette became more cylindrical, with a looser fit. In the 1920s dresses became simple tubes that could be pulled on over the head. 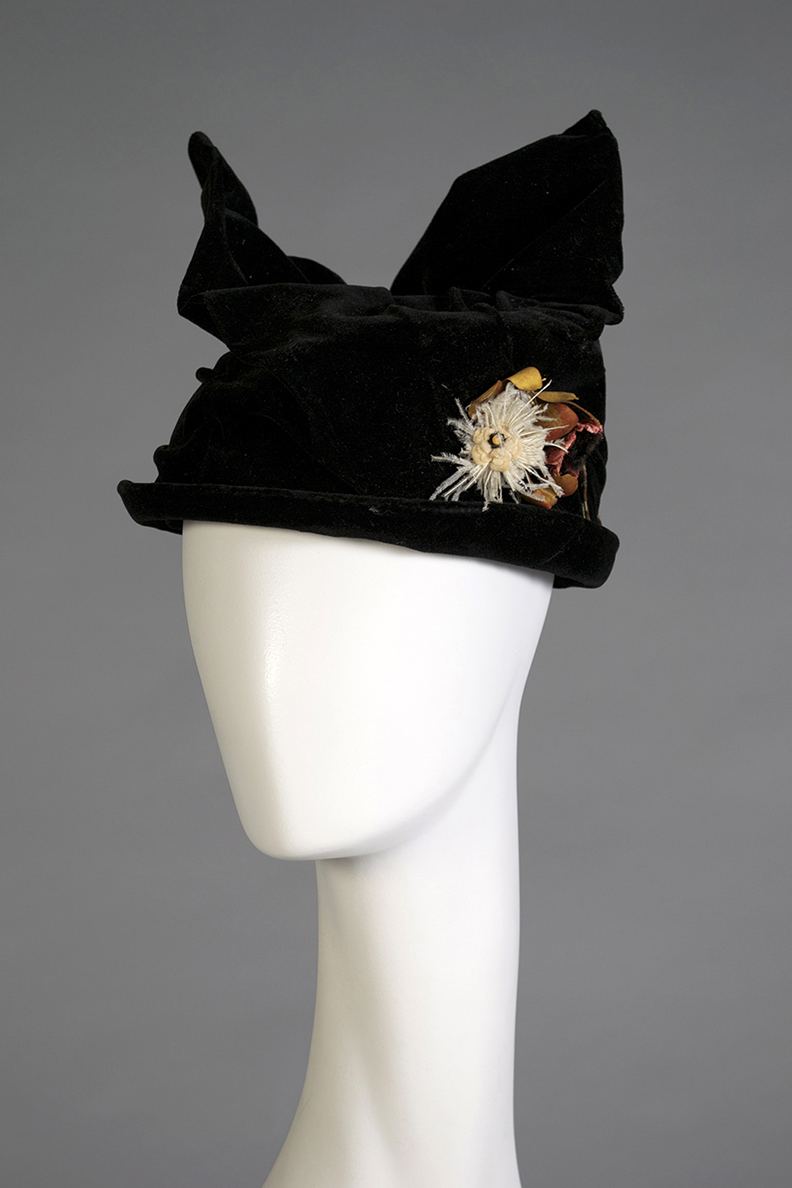 As the silhouettes for women’s fashion became increasing tubular, headwear became dynamic and oversized. The exaggeratedly wide brims of hats in the first decade of the 1900s fell out of favor during the course of the 1910s, but the decreased width was offset by increased height. Bows and feathers shooting upward from the crown balanced out asymmetrical, angular brims.

By the early 1920s the pompadour hairstyles popular at the turn of the century had deflated, and women began to bob their hair. As women’s hairstyles became shorter, hats were designed to fit closer to the head. 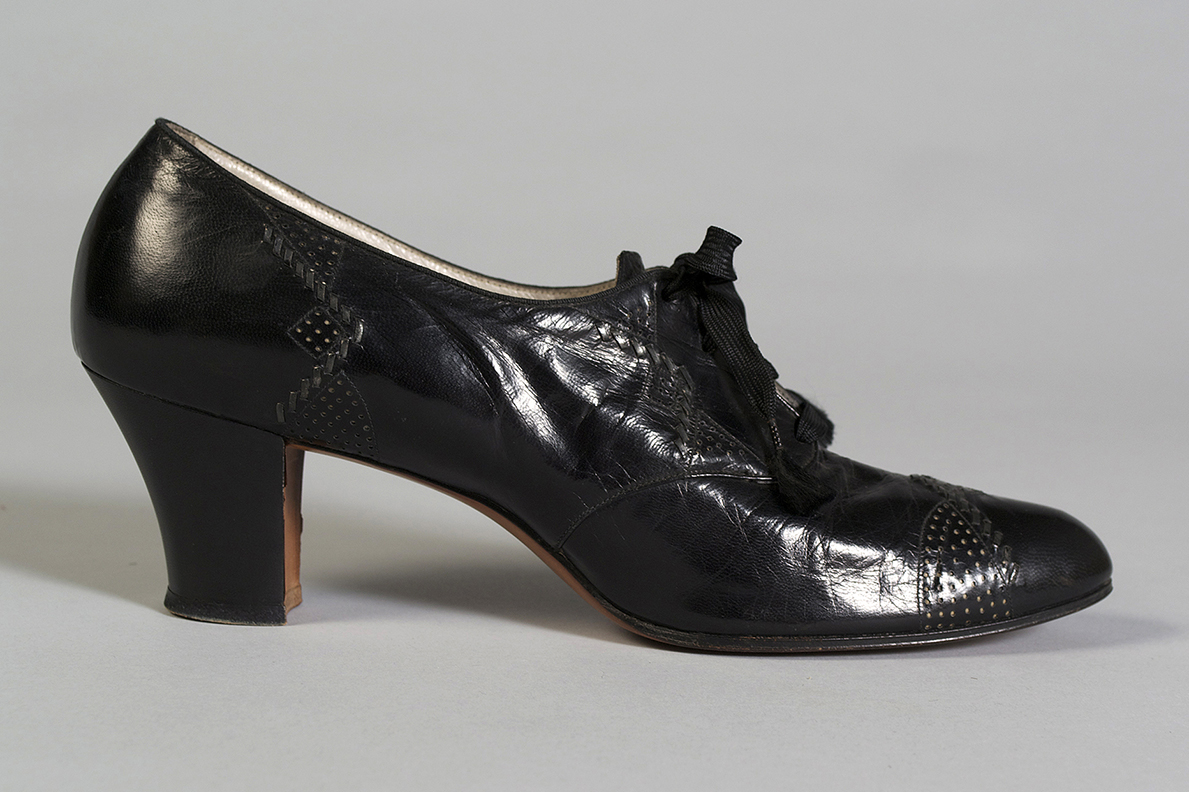 For the first two decades of the 20th century, boots were the predominant footwear. As skirts started to rise after 1914 and the formal rules of attire relaxed, women began to wear the shorter styles with shoes and flesh-toned silk stockings, not high-button boots. In particular, lace-up oxford-style shoes replaced boots for daywear. Evening shoes continued to be pumps that were often quite plain.