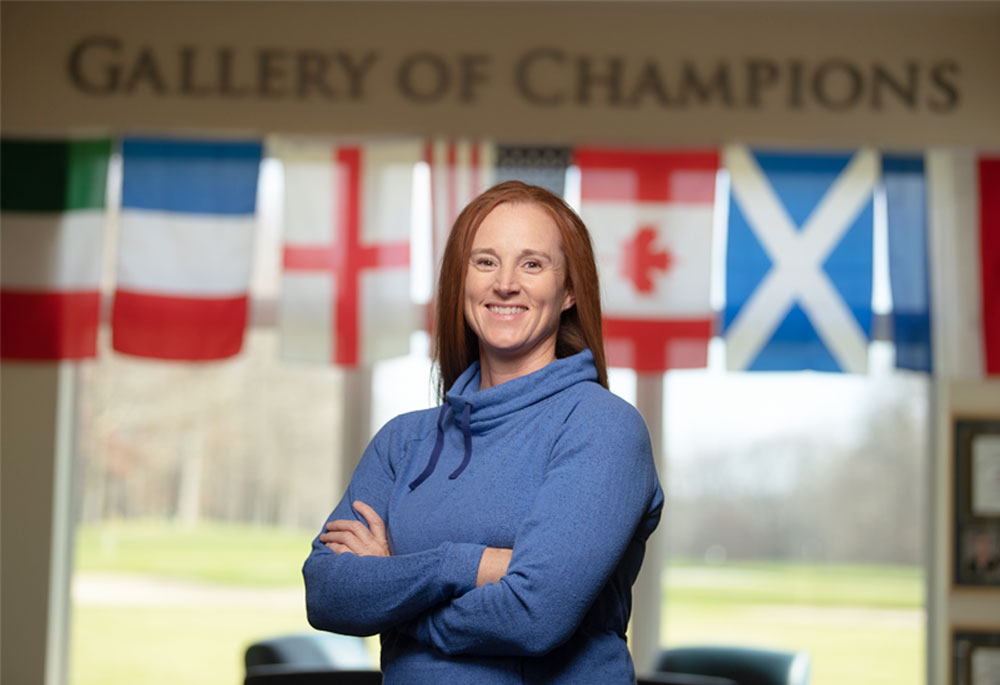 Women’s golf head coach Lisa Strom on resilience—on and off the course.

When Lisa Strom took over as head coach of Kent State women’s golf in July 2019, she was brought in to lead a stellar team that seemed on track to compete for a national championship after winning the first three tournaments of their season.

The pandemic brought that promising season to an abrupt end, but Strom’s background had prepared her to meet such unusual challenges, even while taking over a new program.

“You bring what you stand for as a coach, and for me that’s an ability to adapt and adjust,” says Strom, a former LPGA Tour member who came to Kent State from Texas State University, where she spent three years as head coach of the women’s golf team and was named the 2019 LPGA Professionals National Coach of the Year.

Her philosophy focuses on the whole person, not just the player. “When team members do physical training, they overcome barriers they didn’t realize they could, which helps them mentally,” Strom says. “We train our bodies all the time, but what are we doing to train our brains?” She teaches players how to do mental training using methods such as meditation, visualization and journaling.

With the cancellation of this year’s fall season, instead of playing for spots and traveling for competitions, the team members have remained competitive by playing head-to-head match play within the team and crowning a champion. They also are putting in intense workout hours in the gym. Some of the players have signed up for outside competitions, as have two players who are still at home in Europe.

As part of their mental training, she encourages team members to look beyond the golf course to the community. Last season, Strom introduced them to the Folds of Honor Military Tribute Program, and the players raised $1,100 in scholarship money for the spouses and children of US service members killed or disabled while on duty.

“We train our bodies all the time, but what are we doing to train our brains?”

We asked her to tell us more about herself and what she’s learned so far in the game of life:

On growing up in a golfing family: I was about 10 when I started playing, but I swung a golf club earlier. My parents played; my [paternal] grandparents played. On family vacations we always had our golf clubs with us.

On moving: We moved around quite a bit when I was a kid. It helped me adapt and adjust, be okay with getting to know new people—and accept that things are not always going to be the same.

On life beyond the fairway: I bike the trails around the Cuyahoga National Park, enjoy playing the piano, read a lot, do DIY projects.

On thinking differently: Reading Joshua Medcalf’s Burn Your Goals: The Counter Cultural Approach to Achieving Your Greatest Potential was transformative—instead of focusing on outcomes, I learned to enjoy the process of getting better. There will always be peaks and valleys and new summits to scale.

On putting first things first: You miss the point if all you focus on is collecting a trophy. The fingerprints on the trophy mean a lot more than the trophy itself. But focusing on soft skills doesn’t mean we are less competitive. A national championship is on our radar.

On overcoming setbacks: It’s easy to get sucked into the idea of, “Woe is me.” But a better idea is, “How do we use this time to learn and grow and be prepared for what’s to come?”