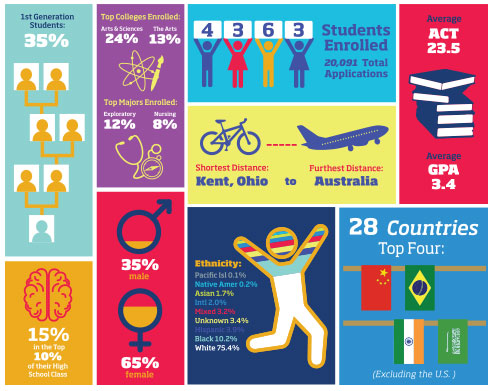 The Kent Campus looks a bit more crowded these days. The 4,363 first-year students who arrived on the campus this fall are the largest class in university history, with 100 more students than a year ago and topping the previous record high in 2016.

But that’s not the only thing noteworthy about them—the new class also reached record highs in academic quality, with an average GPA of 3.4 and average ACT score of 23.5. Nearly half of the new freshmen came with more than 16 college credits—the equivalent of a full semester—from courses they completed in high school.

This year’s freshman class also saw an increase in international students. Students on the Kent Campus come from 28 countries, with the top four foreign countries being China, Brazil, India and Saudi Arabia. Meanwhile, classes began at the American Academy, a new partnership between Kent State and Pontifical Catholic University of Paraná, a major university in Brazil, for students who want a global experience while earning their degree.

Areas of enrollment growth also include a spike in undergraduate and graduate students in Kent State’s College of Architecture and Environmental Design and the College of Public Health.