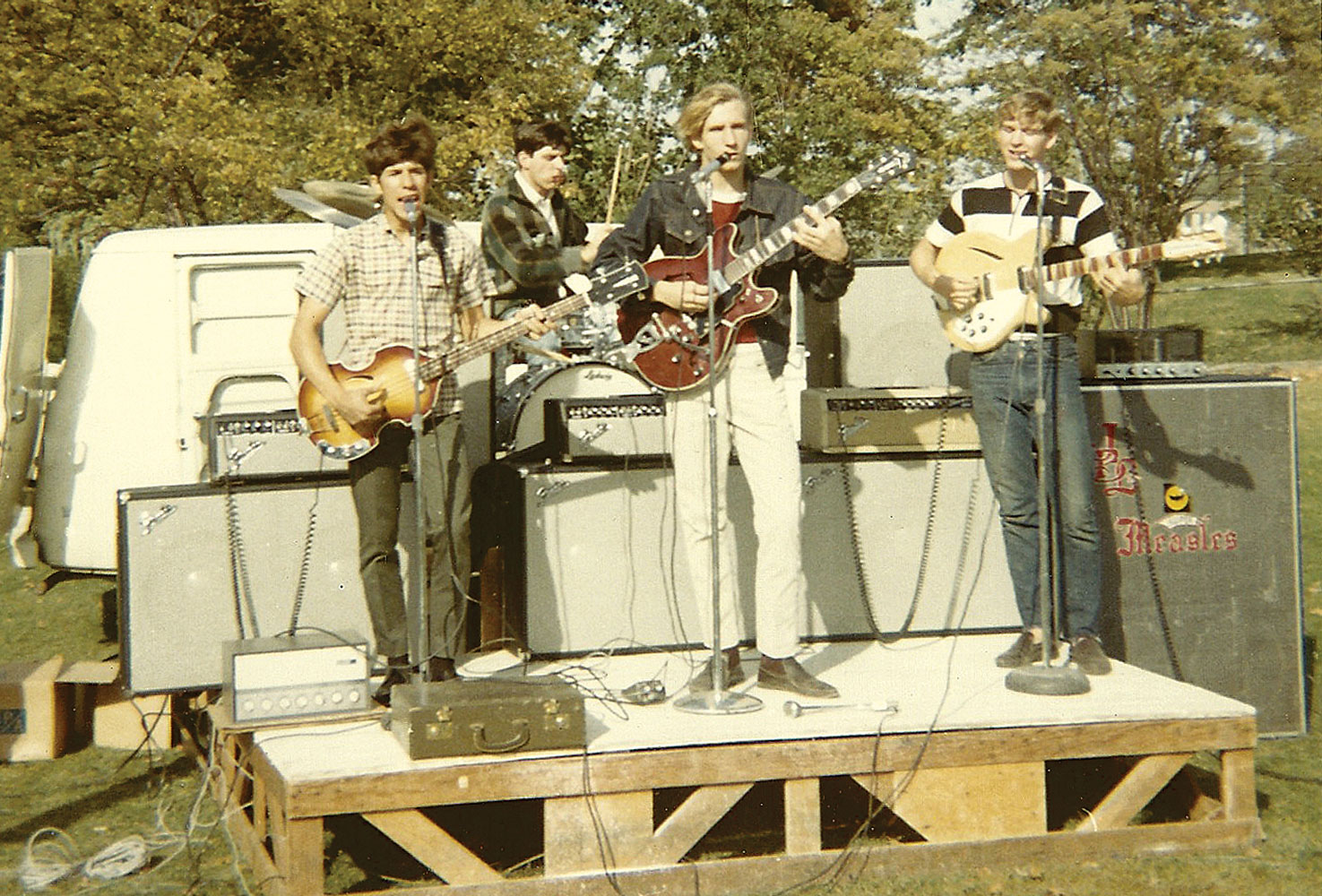 Above: The Measles facing the old University Commons behind the Engleman Hall dormitory at Kent State in the fall of 1966. Left to right: Bobby Sepulveda, Buddy Bennett, Joe Walsh and Larry Lewis.

A Case of the Measles

“In the fall of 1966, Joe Walsh and his band, the Measles, played outdoors on the old Kent State University Commons,” writes Jason Prufer, BA ’03, in the introduction to his recent book, Small Town, Big Music: The Outsized Influence of Kent, Ohio, on the History of Rock and Roll (Kent State University Press).

A compilation of rare photos, oral histories and reviews, the book highlights four decades of musicians who either came to Kent to perform or came out of the Kent music scene and on to fame.

Its first chapter documents the beginnings of the local music scene through reflections on a set of photos, taken by local artist and entertainer Richard Underwood, that show a young Joe Walsh performing with the Measles on the Kent Campus.

The legendary rock guitarist—who attended Kent State from 1965 to 1967, served as grand marshal and performed at KSU’s 1986 Homecoming and received an honorary doctorate degree at KSU’s 2001 commencement—appears several times in the book and wrote the foreword.

“I lived in Manchester Hall and went to classes when the Measles, my first band, started,” writes Joe Walsh, who grew up in Montclair, New Jersey, and took a train to attend Kent State in the late summer of  1965.

“I stayed in Kent the next summer, and the Measles played and rehearsed, so when school got back in session the band was really hot, just really tight.”

The photo above was date stamped October 1966, but it may have been taken in September or October, says Jason Prufer, a Kent native and senior library associate at Kent State. “The band is playing behind Engleman Hall, on the University Commons. In 1966, the Student Union was next door in what is now Oscar Ritchie Hall. On nice days students would hang out on the Commons.”

In one of the oral histories transcribed in the book, Richard Underwood, who attended Kent State before joining the Navy, recalls the day he took the photo. Asked to join the Measles, he went to the campus gig to check out the songs they were playing and take some photos with his Instamatic.

“There wasn’t even any kind of big crowd there or anything,” he says. “It was just kids hanging around [over] the lunch hour, and the band was playing. I can remember distinctly that day they played ‘Drive My Car’ by the Beatles, and they probably played ‘Under My Thumb’ by the Rolling Stones, ‘Good Lovin’’ by the Young Rascals, [and other] pop songs.

“Later, [when] Joe made it with the James Gang and then with the Eagles, it’s like, ‘Hey man, we played together in this band.’ . . . It was an honor to have played with that guy.”

There were bands everywhere in the 1965-75 era, he says. “Every place had live bands, and the best thing was that students supported all of this.”

What triggered the scene was the popularity of the Beatles and the British invasion in 1964, says Jason Prufer. “Before that, bands played in town, but it wasn’t like this. Throngs of kids were going to see these guys and the other bands that emerged at the same time. They would pack the room.” ∼

Send us YOUR Memories: