They Meet at Last 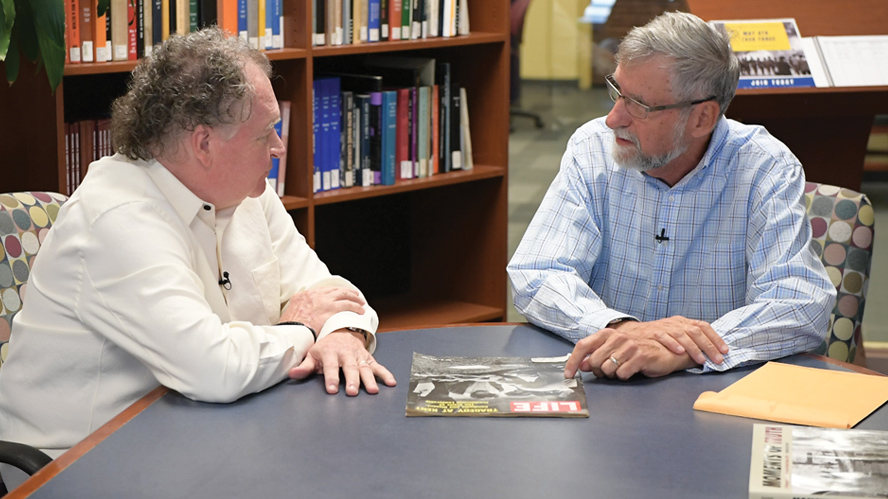 The photo on the cover of Life magazine, showing Kent State freshman John Cleary lying wounded on the ground, became one of the iconic images of the May 4, 1970 Kent State shootings.

It was taken by Howard Ruffner, a Kent State sophomore who had picked up a freelance assignment for Life magazine to photograph that day’s student protests.

No one could have foreseen that the student rally would turn into an attack by the Ohio National Guard that left four students dead and nine, including Cleary, injured.

And Ruffner, who shipped his undeveloped film on a plane to Life magazine’s Chicago office later that day, could not have anticipated that his image would become symbolic of the era. 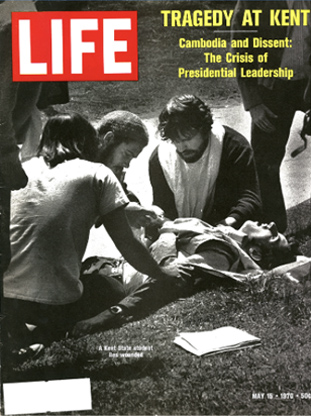 Despite the photo’s significance and historical impact, it took nearly 50 years for the photographer and subject to meet. The reunion took place on Sept. 19, 2019, at the Kent State University Library, where Howard Ruffner, BS ’71, was about to debut his new book, Moments of Truth: A Photographer’s Experience of Kent State 1970. Published by Kent State University Press, the book’s nearly 150 images include dozens of photos that he took that day, most of them previously unpublished.

John Cleary, BArch ’74, a retired architect who resides outside of Pittsburgh, says the meeting was an unexpected opportunity after so many years. “Howard had some photographs from that day that I had not seen before, so it was good to sit down with him and talk,” he says.

Cleary was a 19-year-old from Scotia, New York—and about to take a photo with a camera he had borrowed from his roommate—when a guardsman’s bullet hit his chest, knocking him down.

One of Ruffner’s photos that particularly touched Cleary was a photo of him lying on the ground surrounded by a circle of students. “They were holding hands, kind of protecting me,” he says. “In the center was myself and the people working on me.” He was moved by how fellow students came to his aid (see photo below).

A native of Lakewood, Ohio, Ruffner was 24 at the time of the shootings, having started college after serving time in the US Air Force. He resides in Pasadena, Calif., after retiring from a long career in corporate communications and as a high school media studies teacher.

For Ruffner, the day’s events and having his photos published in Life solidified his career choice in photography. “I was fortunate not to be shot and to document what was there.” 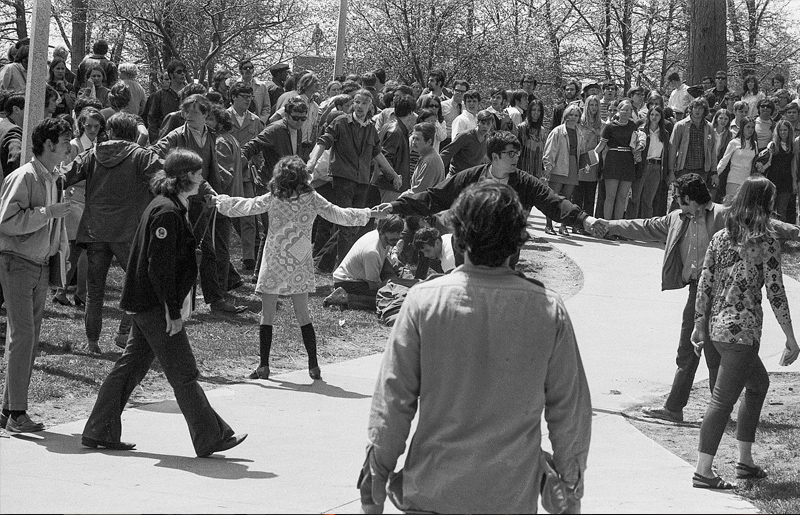 Over the years, the Life cover has followed Cleary, with friends sending him copies to mark anniversaries of May 4. “On the 25th anniversary, I got four or five magazines,” he says. “I have many copies, mostly from friends and relatives who felt it was time to pass it along.”

Ruffner and Cleary’s reunion was captured by NBC Nightly News, which expected to air the segment sometime near the 50th anniversary of May 4.

The pair had anticipated seeing each other again at the May 4 50th anniversary commemoration, until the university cancelled those events due to the coronavirus pandemic.

Ruffner says it seems oddly appropriate for the campus to be closed on May 4, because it harkens back to the days after May 4, 1970, when the campus was closed and the students were sent home following the shooting.

“It seems a strange parallel to that aftermath at this time.”