The convoluted (and sometimes controversial) chronology of Kent State’s mascot

There are multiple versions of this tale—and several claims to be the “first official mascot”—but we consulted previous histories and Kent State’s digital collection to piece together the puzzle using primary sources whenever possible. Here’s our attempt to tell the story of how Kent State arrived at its moniker and mascot—while grappling with the question, “What exactly is a Golden Flash, anyway?” 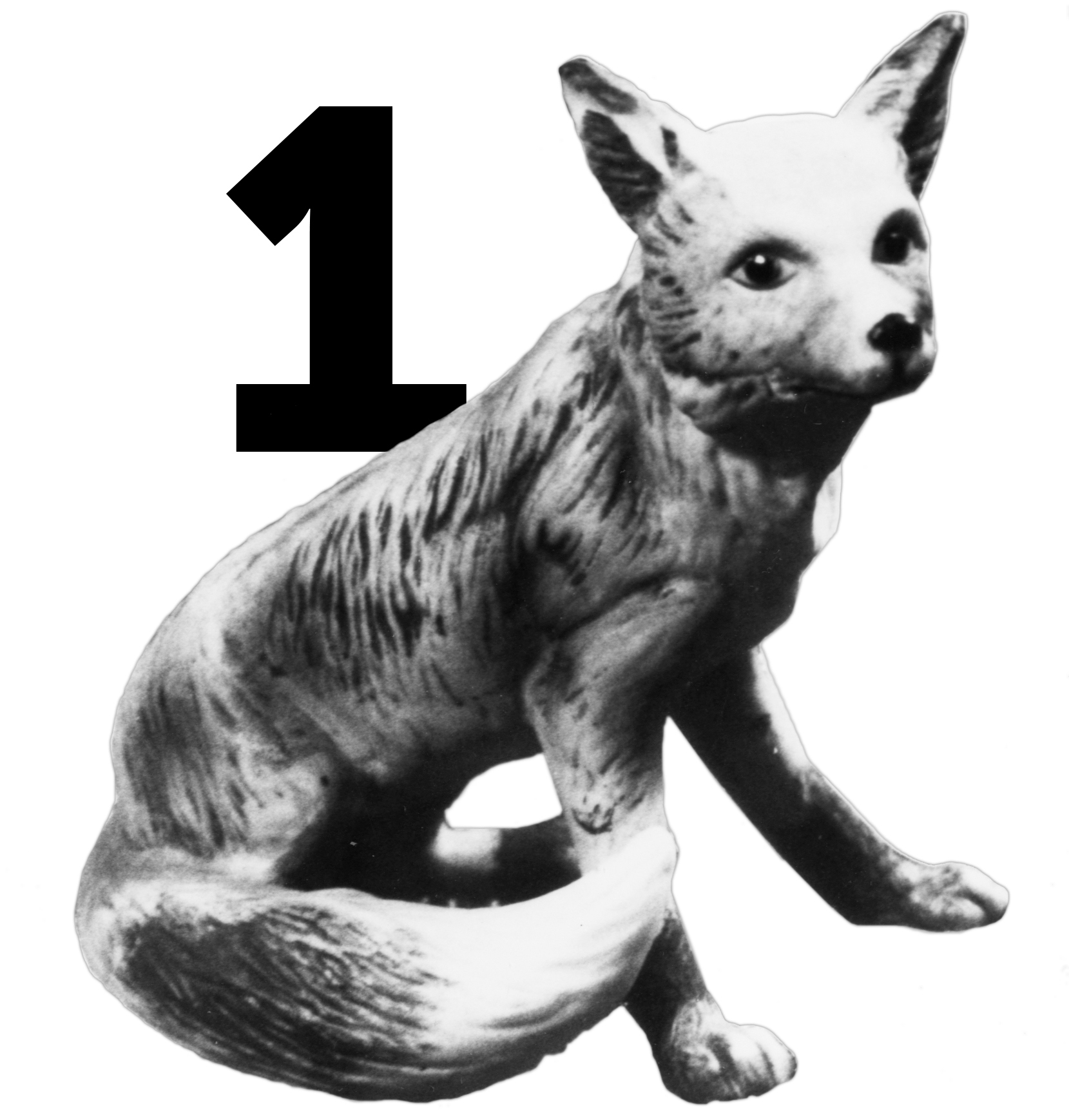 1920–25 Kent State Normal College establishes its first “real football team with full equipment [and] honest-to-goodness coach” in 1920 (1921 Chestnut Burr), but goes without scoring—or a name—until they call the 1923 team the “Silver Foxes,” after the silver fox ranch adjacent to campus that is co-owned by the school’s first president, John McGilvrey (1923 Chestnut Burr). The 1923 team scores the college's first touchdown and receives this accolade: “The Silver Foxes . . . created a fighting spirit that will live—an undying determination that will make the football record at Kent State in the future a thing of joy” (1924 Chestnut Burr). There is no mention of a silver fox (1) ever attending a game.

1926–27 The Board of Trustees dismisses President McGilvrey in January 1926, after his repeated attempts to advance the school’s standing antagonizes the Ohio legislature and the president of The Ohio State University. Acting president T. Howard Winters supposedly institutes a contest (with a $25 prize) to select a new name for Kent State athletic teams, and Golden Flashes wins (The Years of Youth by Phillip R. Shriver). However, the Nov. 29, 1927 Kent Stater and the 1927 Chestnut Burr still refer to the athletic teams as the Silver Foxes. 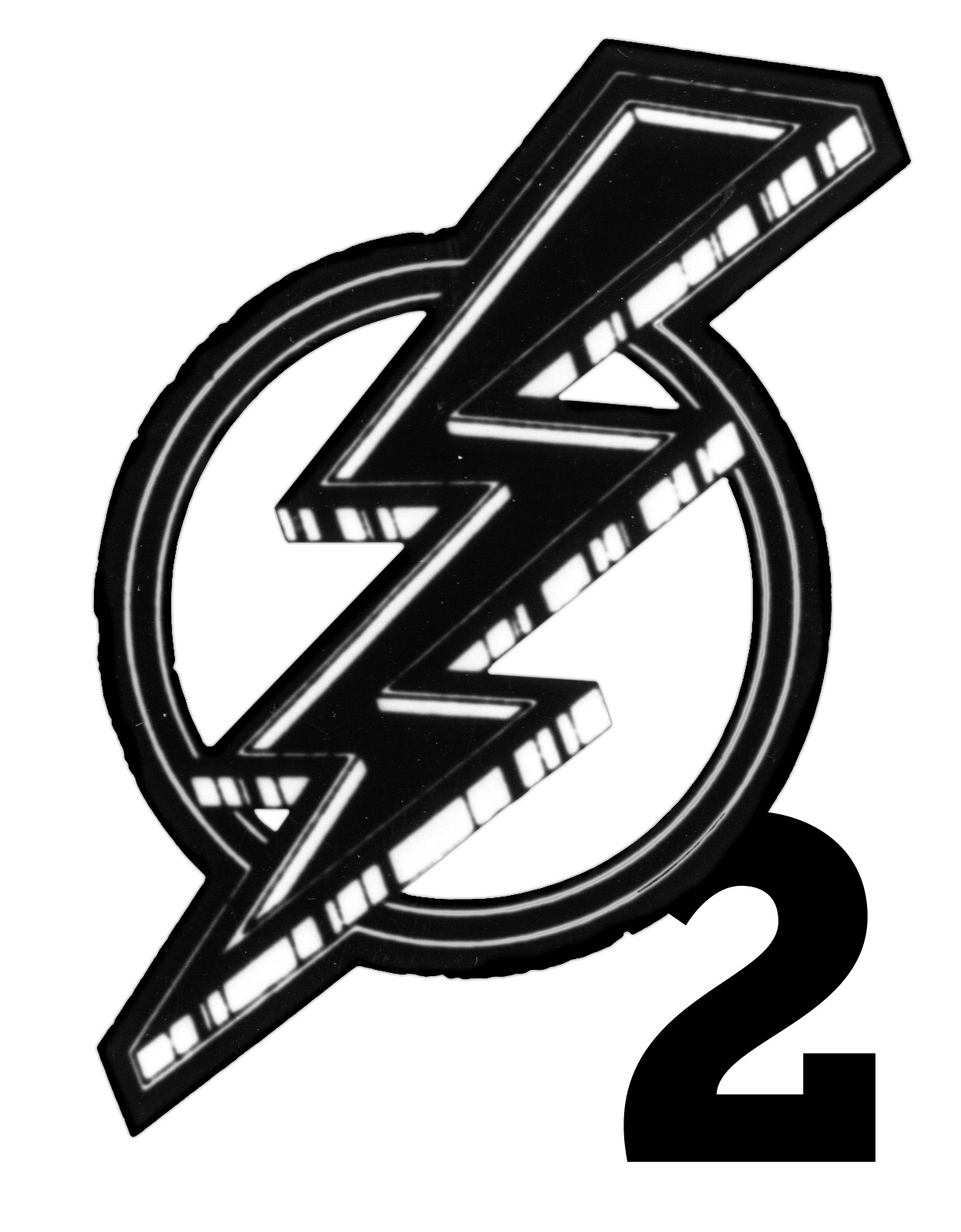 1928 The name Golden Flashes appears without ceremony in the Jan. 13, 1928 Kent Stater and in the caption for the basketball team in the 1928 Chestnut Burr. However, an ad appears in the June 1, 1928 Kent Stater: “Name still open, to be decided Wednesday. ‘Give Kent’s Athletic Teams a Name Contest’ will be decided once and for all at the Recognition Day Banquet . . . at the time to be named, the Orphans of Kent will officially have a name.” Names to be voted on include the already recognized “Silver Foxes” and “Golden Flashes,” but “Hurricanes” and “Warriors” are strong contenders.

“Golden Flashes,” which apparently wins again, is said to be derived from the popular California Golden Bears at the University of California, Berkeley, national champions in 1920. Oliver Wolcott, who played football at Kent State in 1922 and became sports editor of the Kent Courier-Tribune, perpetuates its use in his columns (as recalled in a recording, circa 1983, by Richard "Moose" Paskert ’49, athlete, coach and administrator in the athletics program for more than 40 years). Kent State teams use the symbol of a lightning bolt (2) for many years.

1941 The Sept. 25, 1941 Kent Stater claims that at the evening’s pep rally, “Mascot to be Surprise: Feature of the evening is to be the first appearance of a mascot on the Kent Campus.” Georgie Starn, young son of head coach Rosie Starn, leads a three-month-old German shepherd puppy named “Kim” onto the stage. The dog has been offered as a mascot by Jack Kauvar, sophomore cheerleader, to “cavort at all the Blue and Gold games.” However, subsequent issues of the Kent Stater report that Kauvar is accepting donations to pay for the dog’s hospital bills (Oct. 9), that he doesn’t have time to keep Kim any more and needs to find him a good home (Oct. 15), that three people have offered to raise the puppy (Oct. 16) and finally that Kauvar has loaned Kim to the Sigma Tau Gamma Fraternity, but will continue to see that he is fed (Oct. 23). 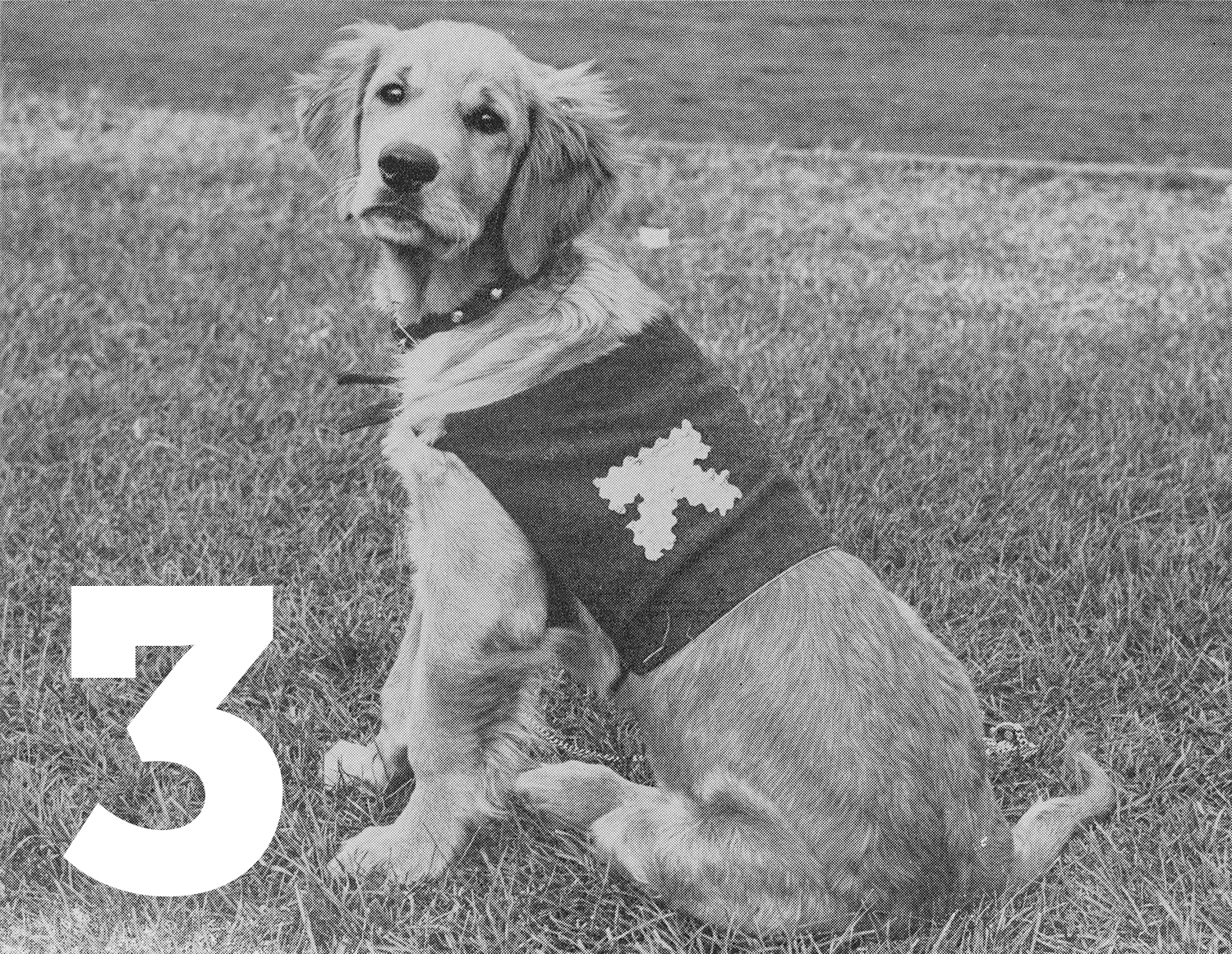 1955 The cover of the December 1955 Kent Alumnus is a photo of a golden retriever puppy wearing a cape branded with a “K” (3). The caption reads: “Four-month-old Kent State University Golden Flasher I is the university’s first official mascot. A gift of the Ravenna Kennel Club, our mascot is a golden retriever from the Cheyenne Golden Kennels in Kansas and will weigh eighty pounds when full grown.” For a time, the dog appears at all home games, but develops a bone disease and has to be replaced (Paskert recording).

1957–61  An ad for postcards of Golden Flasher II appears in the Jan. 23, 1957 Daily Kent Stater, and the 1958 Chestnut Burr notes that “By selling dinks to freshmen and mums for Homecoming, the Golden K group [formed to encourage student support at athletic activities] makes enough money to care for the KSU mascot, Golden Flasher II.” However, a three-month disagreement between the Golden K and the Student Council over expenditures results in Golden K “gifting” the dog to the council, which then debates what to do with it (Feb. 9, 1961 Daily Kent Stater). Golden K eventually gives the dog away and asks to use the funds formerly allocated for its care to make “a mascot out of a person dressed in a costume.” Council holds the funds in reserve until Golden K can be more specific about the project and its cost (June 1, 1961 Daily Kent Stater).

1968–74 Grog, the caveman character from the popular comic strip B.C., arrives on the scene. Conceived of in the spring of 1967 by Joe Joyce ’69 and Gene Ferrara ’74 of the Chestnut League (the revamped spirit organization formed in 1964), he doesn’t show up at games until the fall of 1968 (Feb. 26, 1969 Daily Kent Stater). In the meantime, Chuck Ayers ’71, cartoonist for the Daily Kent Stater, requests permission to use Grog as Kent State’s mascot from its creator, cartoonist Johnny Hart (March 4, 1971, Daily Kent Stater).

The eight-foot-tall, 50-pound costume is made of wood supports and furry cloth by Esser Costume Co. of Pittsburgh for $500 ( 1978 Homecoming supplement, Daily Kent Stater).

“It was heavy and hot‚” says then Kent State baseball player Ron DeGrand ’74, who wore the costume in 1970–72 at both football and basketball games. “I would be wringing wet after a basketball game. But nobody could figure out what a Flash was, so Grog was as good a mascot as any.” 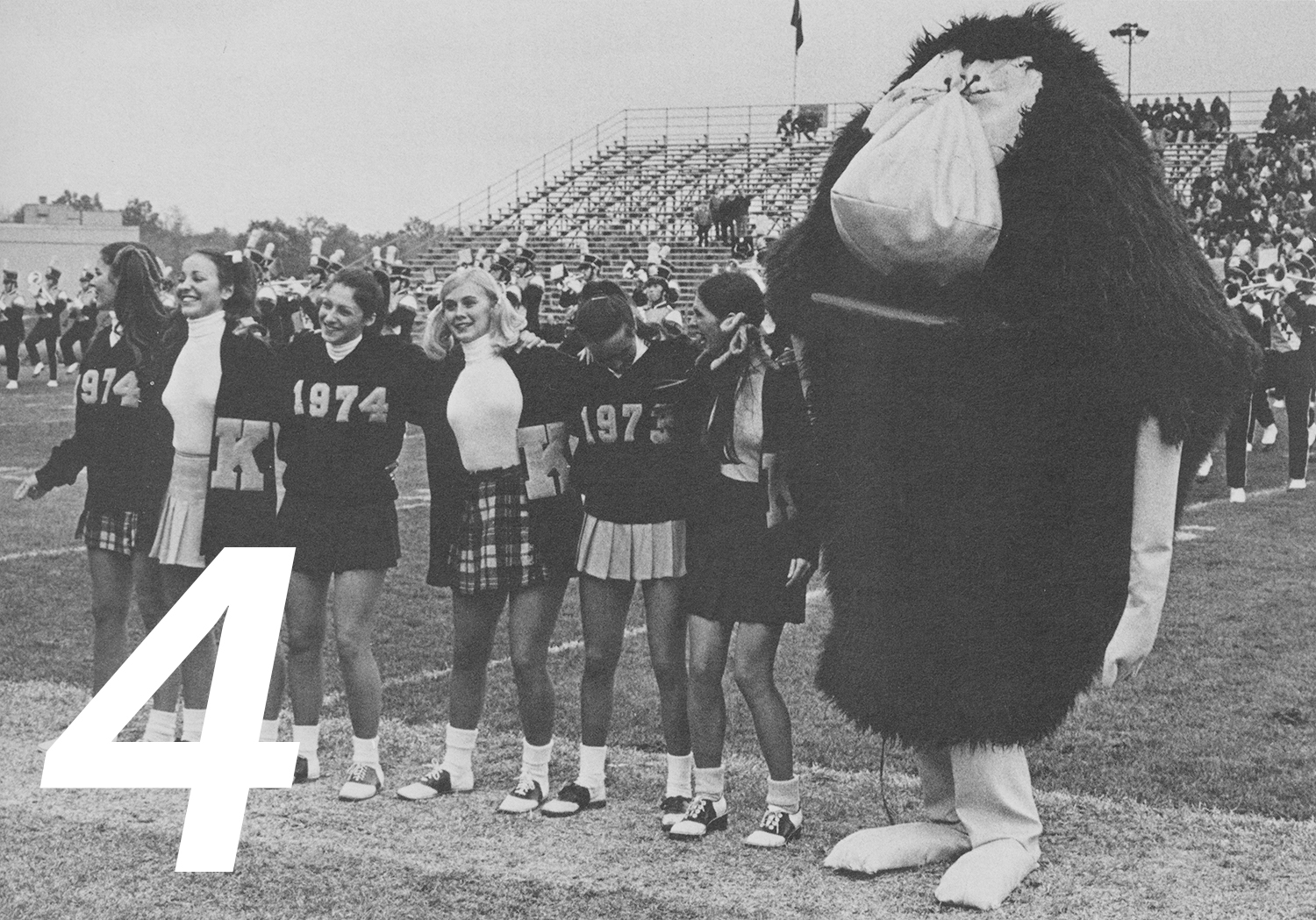 Despite misadventures when the costume temporarily goes missing several times, Grog (4) continues to amuse fans until 1974, when he is phased out as mascot by the athletic department. He still shows up as a logo on DuBois Bookstore bags for years afterward. 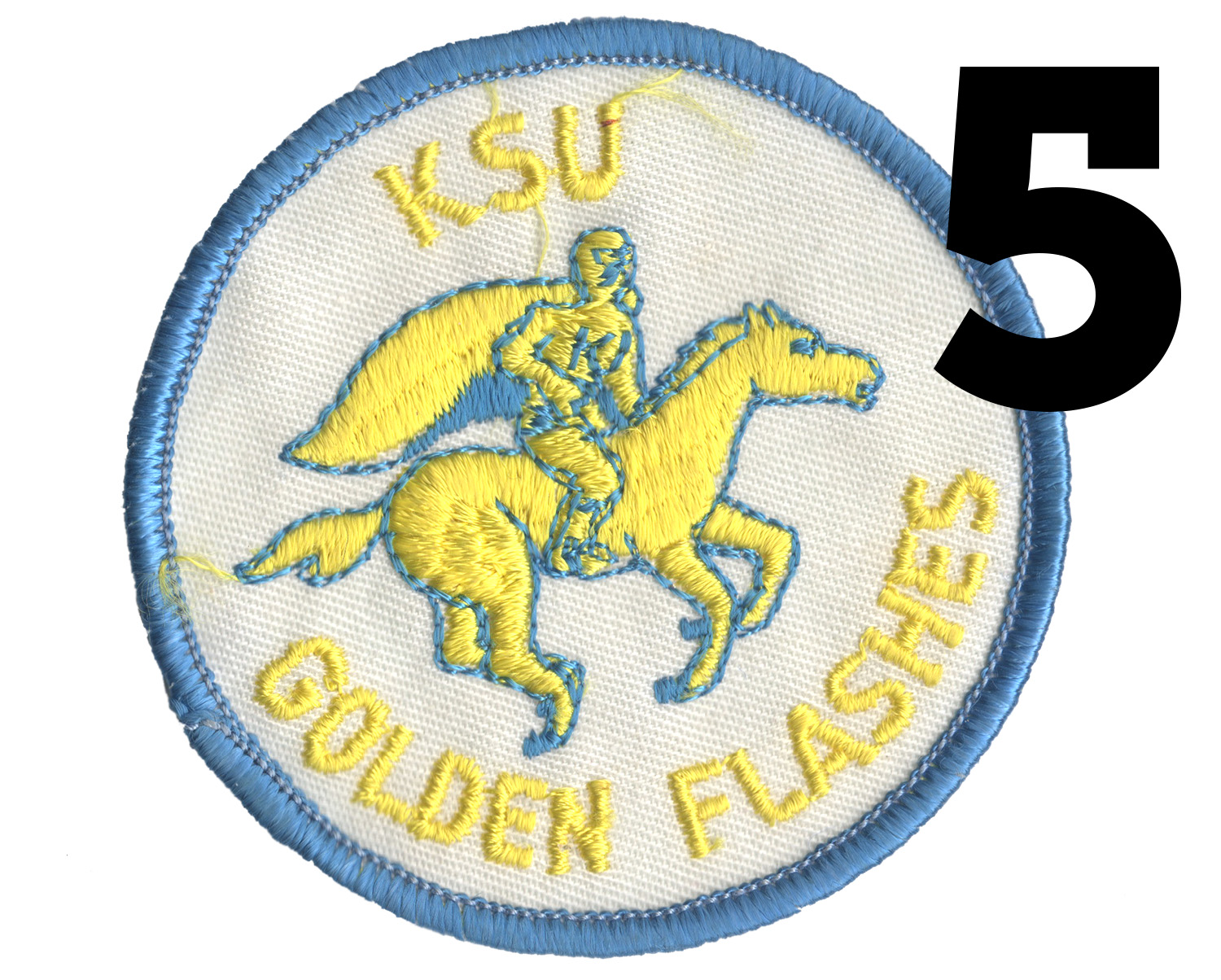 1971–74 During the tenure of head football coach Don James, the athletic department introduces a western-themed horse and rider (5) for all Dix Stadium games. The horse cantors up and down the sidelines during the game and up the 50-yard line following a touchdown. Gary Urchek ’77, whose father was friends with Don James, rode his Arabian stallion, Raffstar, for one season, but says he also borrowed a golden palomino at the request of the athletic department (who called it Golden Flasher). His sister, Diane Urchek Coe ’76, ’86 MEd, took over the next season and also rode Raffstar, as seen in a photo (6) from the 1974 Chestnut Burr (Paskert recording, Urchek interview). 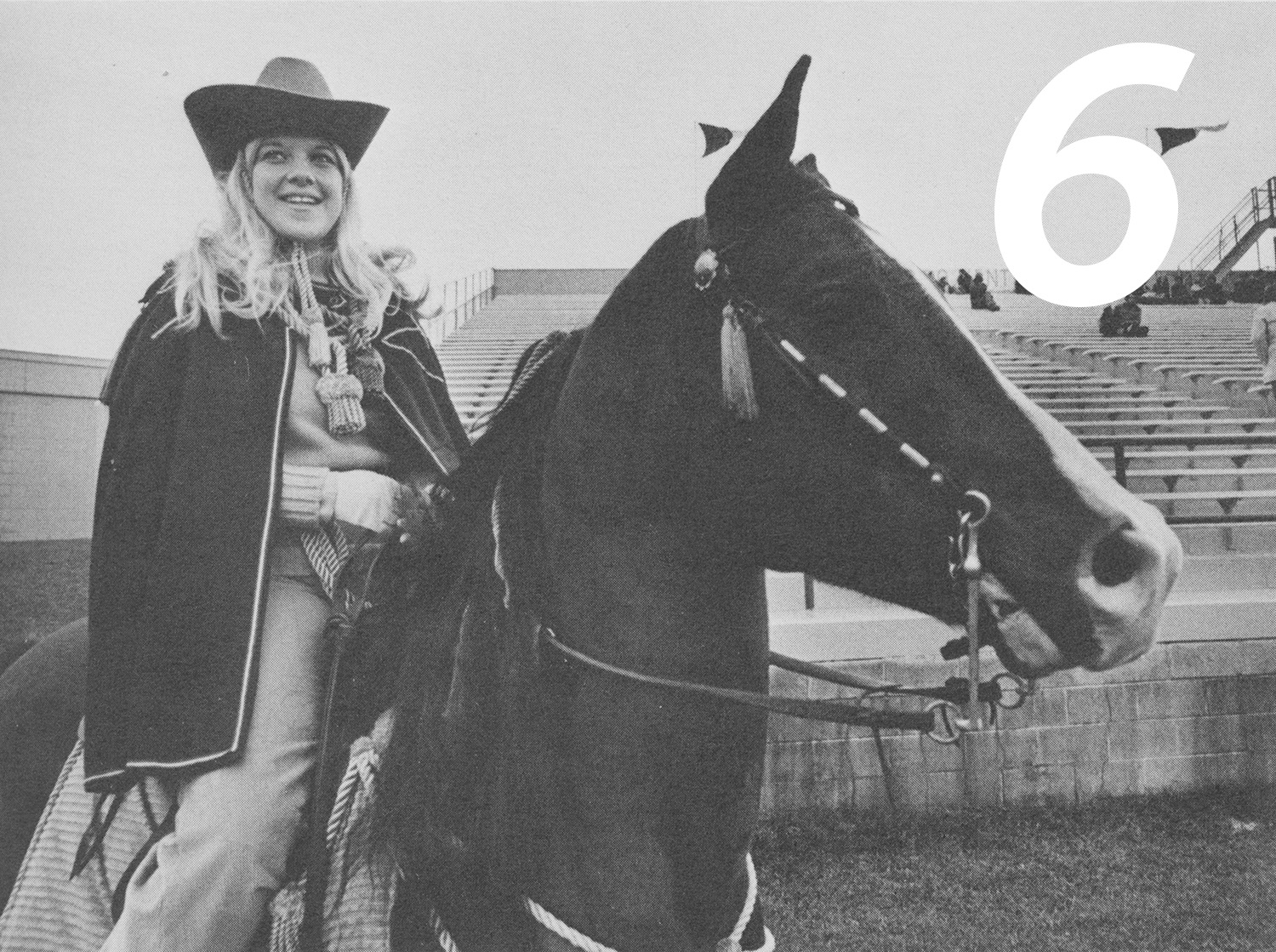 In 1972, members of a Name Change Committee mount an effort to change the athletic team name. “It’s a dynamic name and an original one,” protests sports writer Dave Wolfson ’72 in the April 7, 1972 Daily Kent Stater. “Ask current team members and past members, and the overwhelming majority will favor keeping the current nickname. They carried the name of ‘Golden Flashes’ with pride and they are not ready for it to be needlessly thrown out.” The name stays.

1977 A golden retriever mascot returns to the scene and is proclaimed  KSU’s “first official mascot” (Oct. 14, 1977, Daily Kent Stater). The 19-week-old golden retriever—donated by the Blue and Gold Club, a KSU booster organization—is named “MAC the Flash” by Karen Fuller ’73, who wins a “name the mascot” contest held by the athletic department and WKNT radio. “There was no poll or contest for students to help decide what mascot would be selected,” Terry Barnard‚ sports information director says. “But‚ officially, Flash represents the intercollegiate athletic department, not the student body” (Oct. 6‚ 1978 Daily Kent Stater). He remains the mascot (7) at least until 1979. 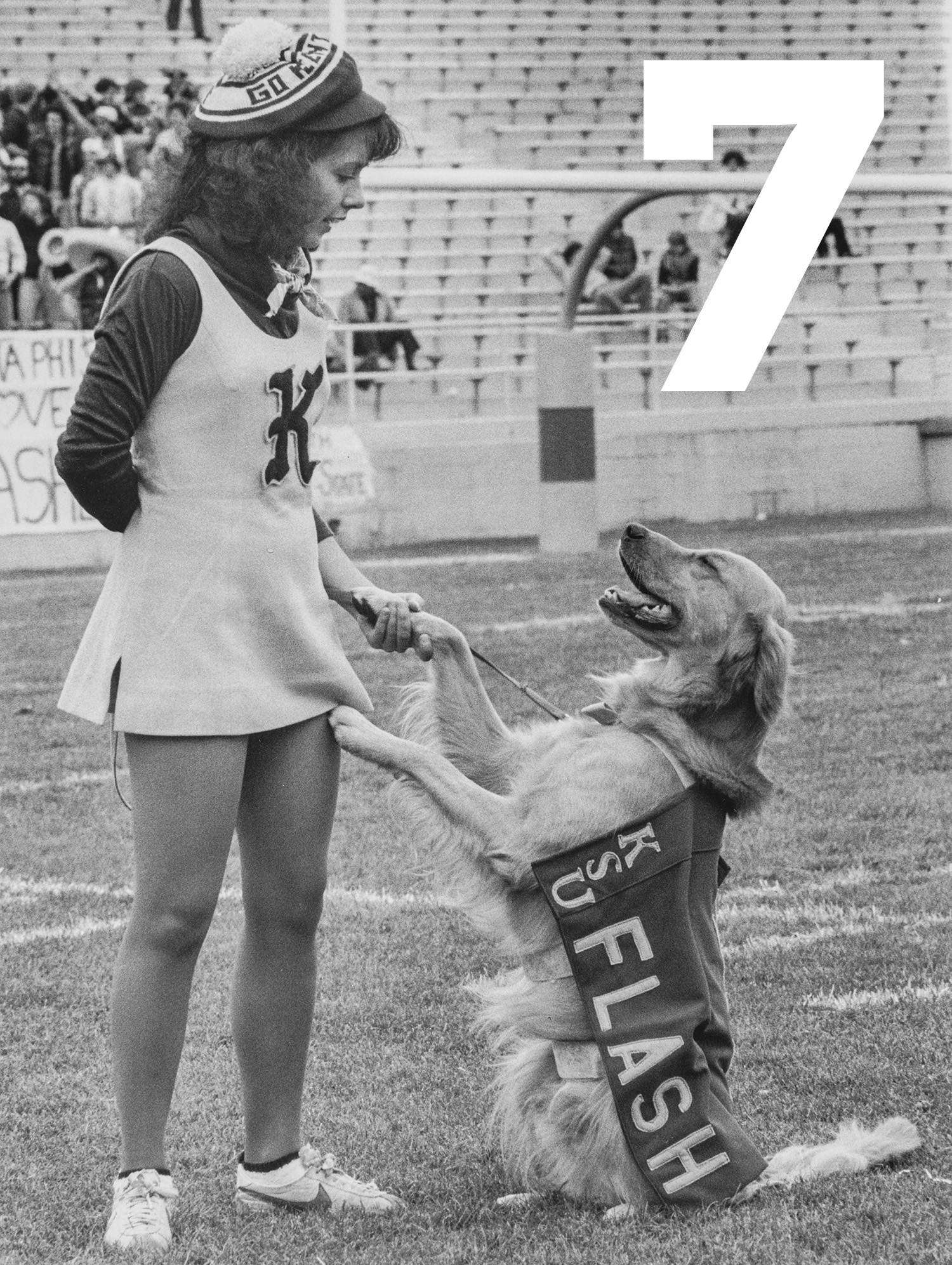 1981–83 After the golden retriever, the mascot reverts back “to costumed individuals roaming about in attire with lightning bolts” (Paskert recording), perhaps based on a drawing of a superhero brandishing lightning flashes and signed “Hinkel ’81” (8). The costumed characters apparently go under various names‚ including Freddie Flash‚ Golden Flash‚ Flashman and Captain Flash (9)‚ as seen in a photo from the 1982 Chestnut Burr. 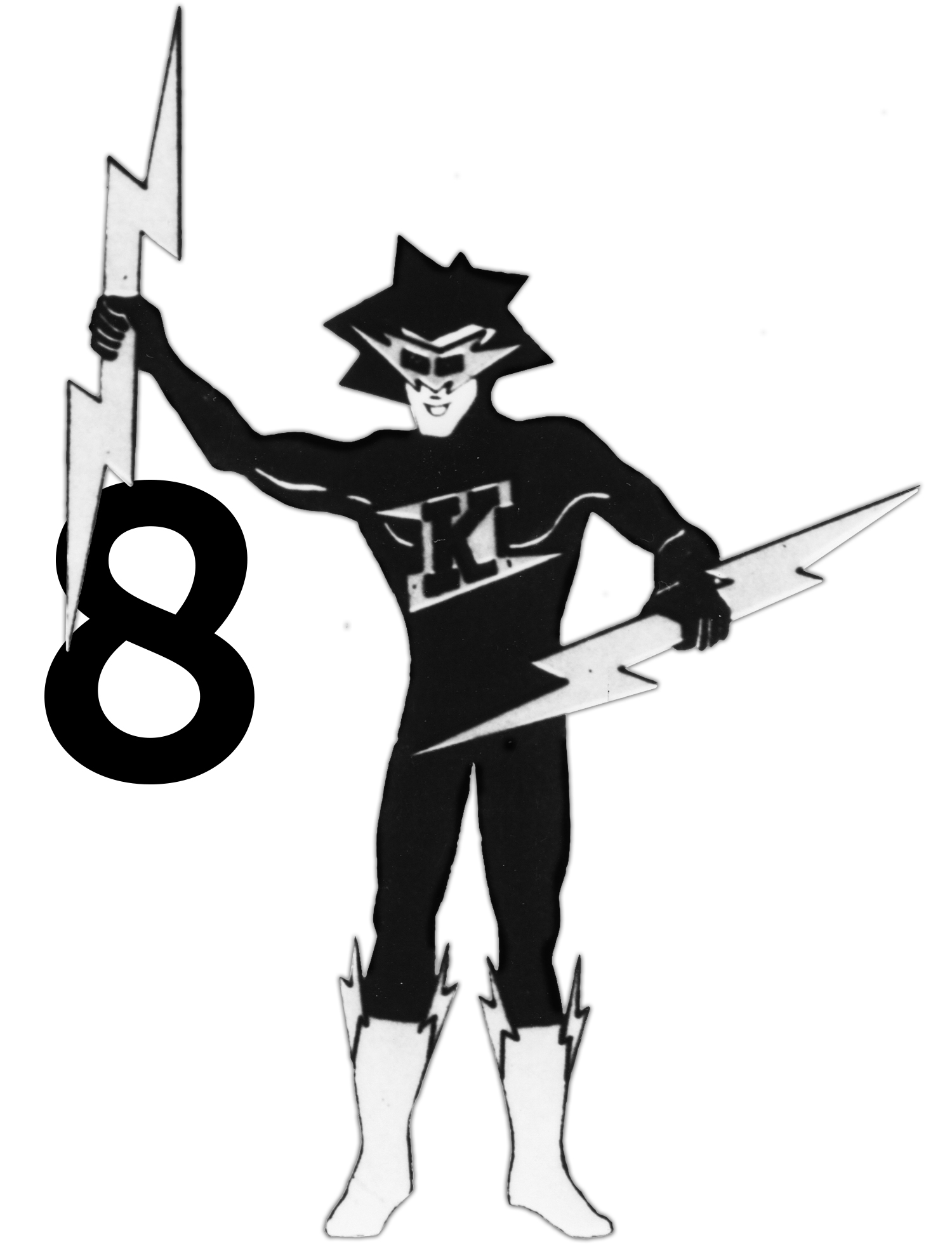 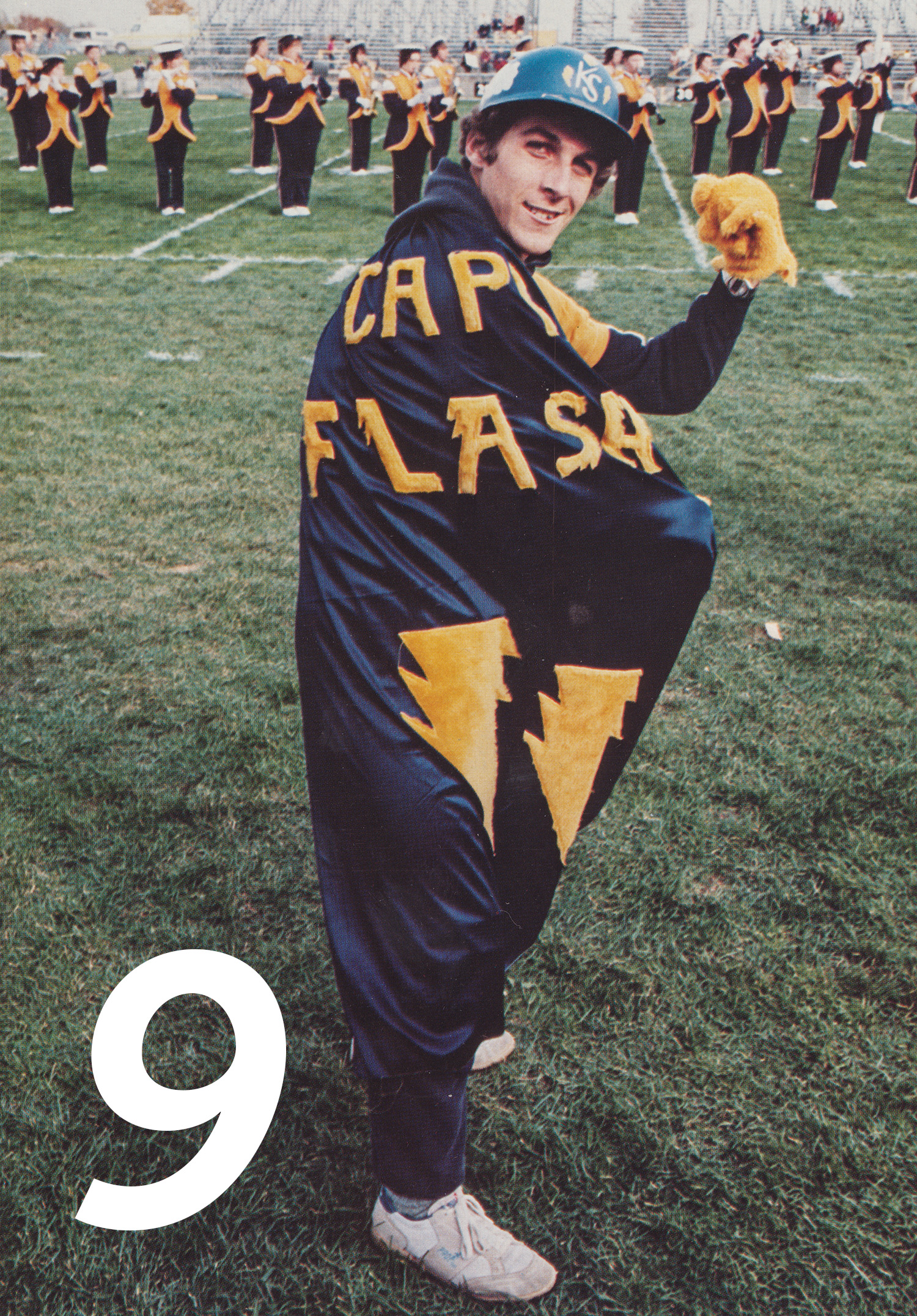 1985 To increase school spirit and introduce a new era during the university’s sesquicentennial, the athletics department hatches an elaborate and carefully scripted campaign to unveil “Kent State’s first official mascot, Flash—The Golden Eagle” during the Oct. 12 Homecoming game against the University of Texas-El Paso (Oct. 15, 1985 Daily Kent Stater). Terry Barnard‚ then director of Athletic Marketing and Communications‚ says an eagle was chosen because the university wanted something proud and “there is nothing prouder than an eagle” (Sept. 3, 1985, Daily Kent Stater). A new logo also includes an eagle. 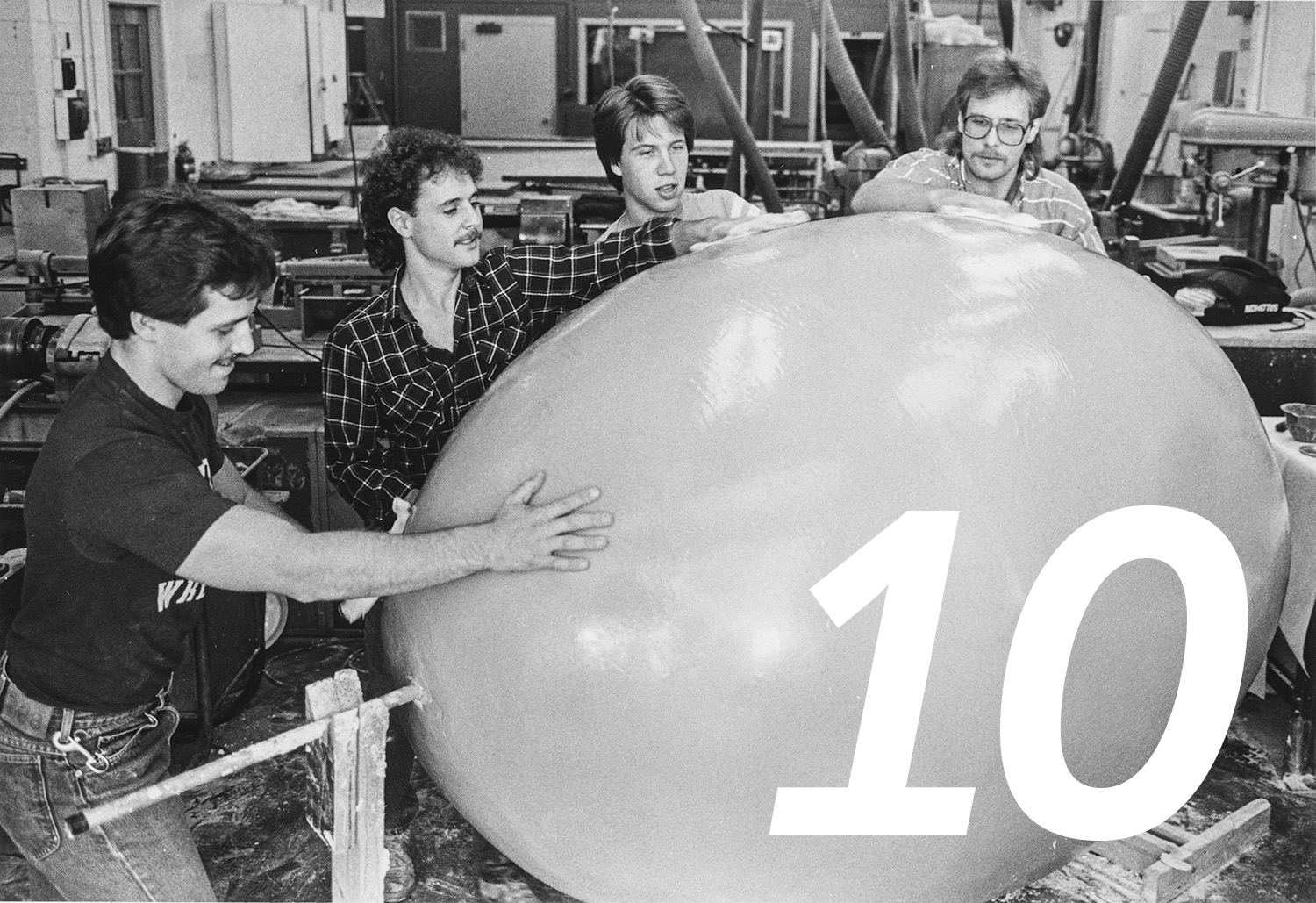 Many people prepare for the reveal, including students in the Kent Technology Education Club who put in more than 300 hours to construct a giant egg (10) out of fiberglass and resin, which is brought onto the field at halftime. As the band plays, the egg opens, a student in a  golden eagle costume (11) runs to the 50-yard line, and a live golden eagle flies from the band tunnel to a perch on centerfield. The 23-year-old golden eagle, formerly named Wembli, is christened as “Flash” (12) during the festivities. It lives in Baden, Pa., with its handler, Earl Shriver Jr. and appears at select home events until the mid-90s. 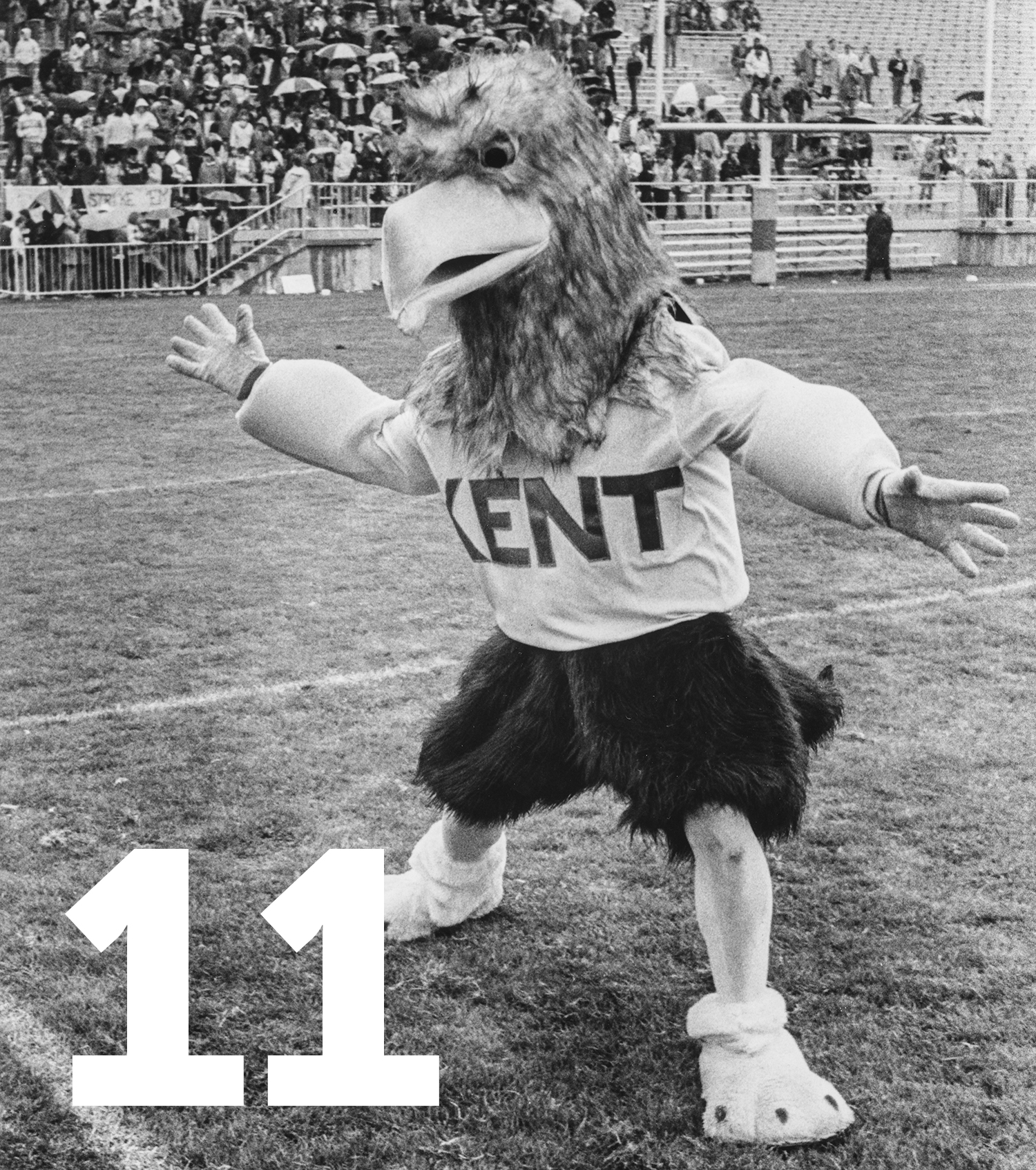 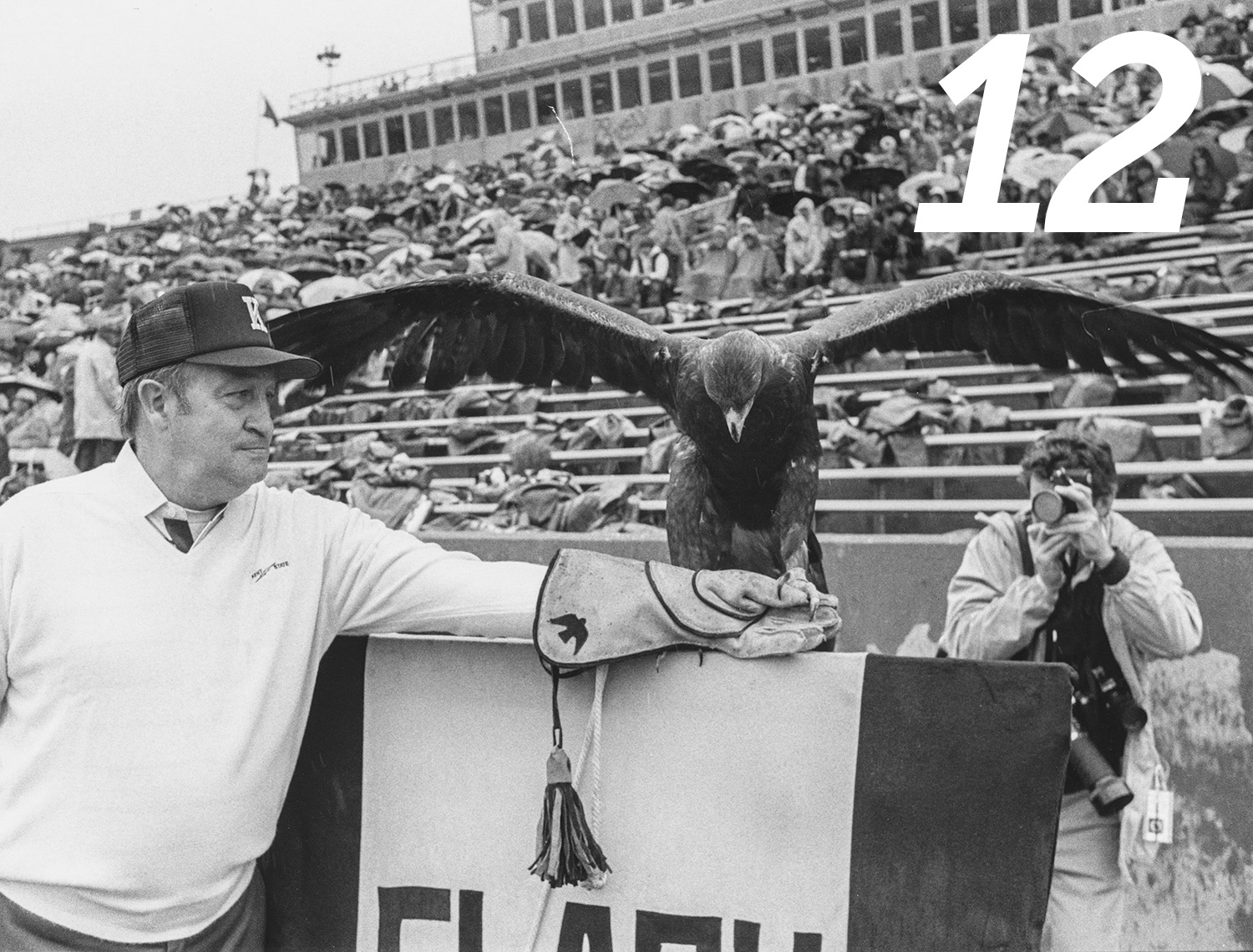 Additional costumes are made, such as this 1986 one (13) for basketball games. Although the golden eagle is met with some scorn by students who object to having no part in creating “a unique mascot,” (Oct. 22, 1985 Daily Kent Stater), it endures, in updated versions, as the school’s official mascot (14). 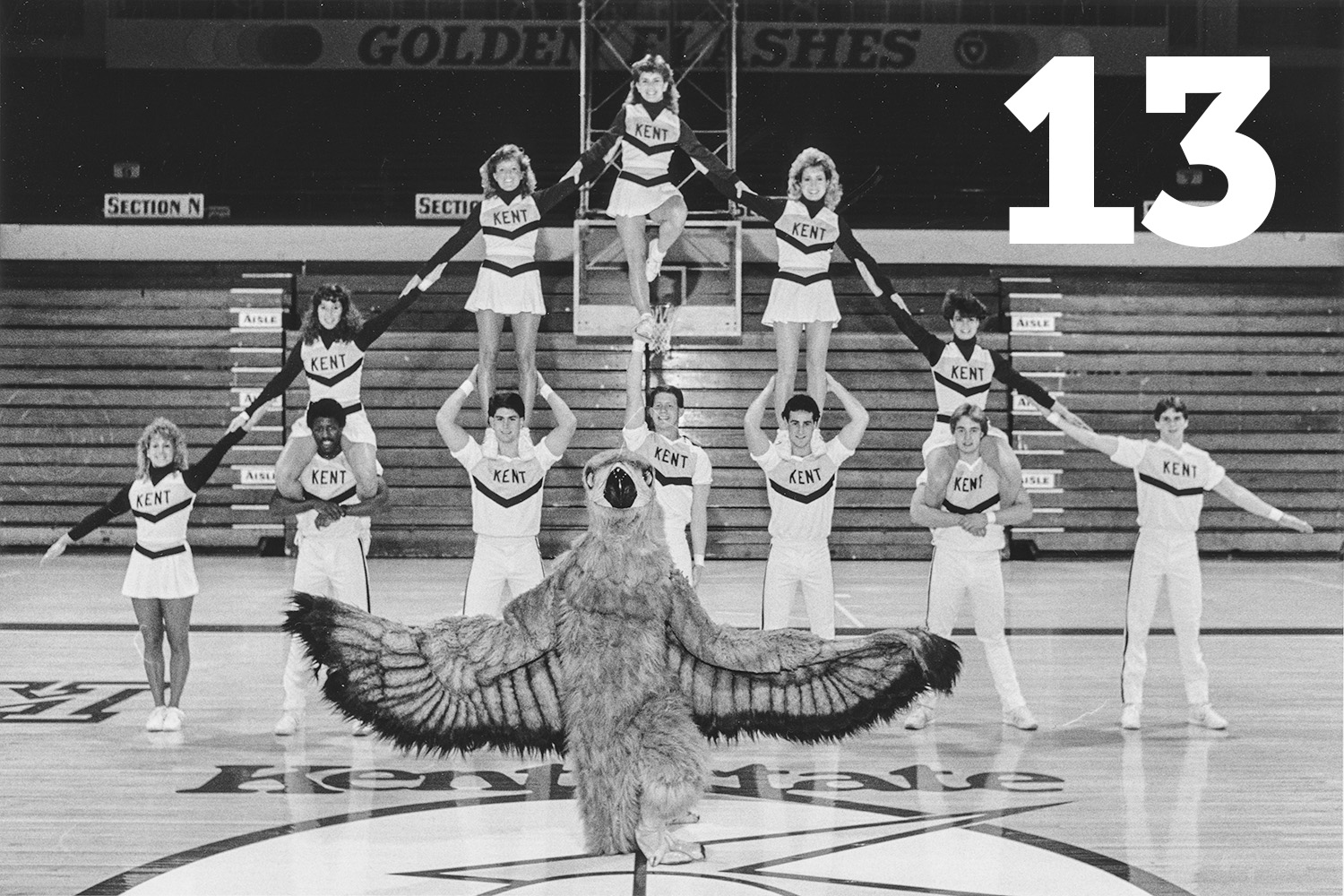 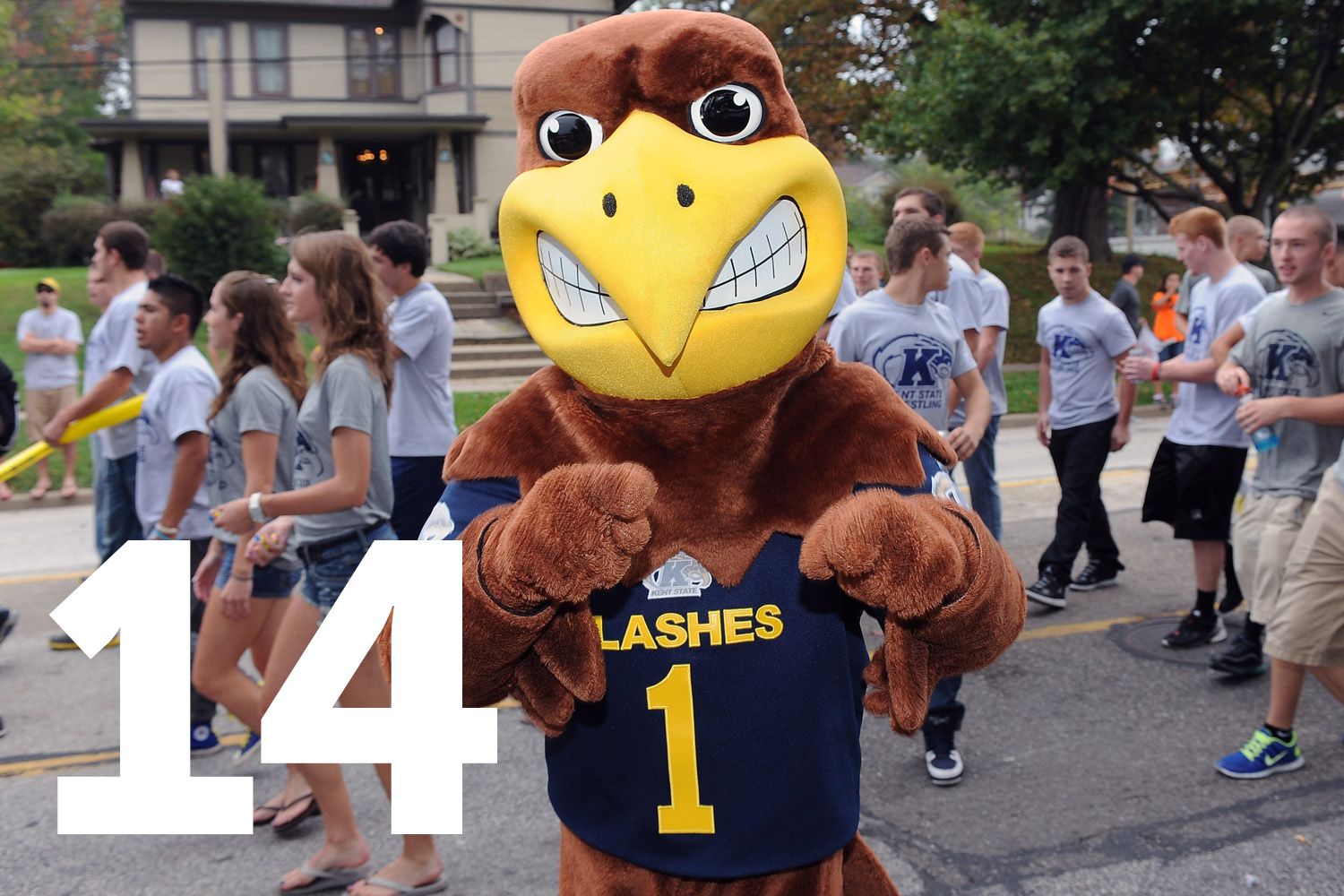 2008 A new live golden eagle, Flash, makes its debut as Kent State’s official mascot on Jan. 23, 2008, prior to a men’s basketball game with Akron (15). Hit by a truck in California‚ the rescued bird was sent to Back to the Wild, a wildlife rehabilitation and nature education center in Castalia, Ohio. It is disabled and unable to return to the wild, says Mona Rutger, founder of Back to the Wild, who uses fees from renting the eagle to benefit the center’s mission. 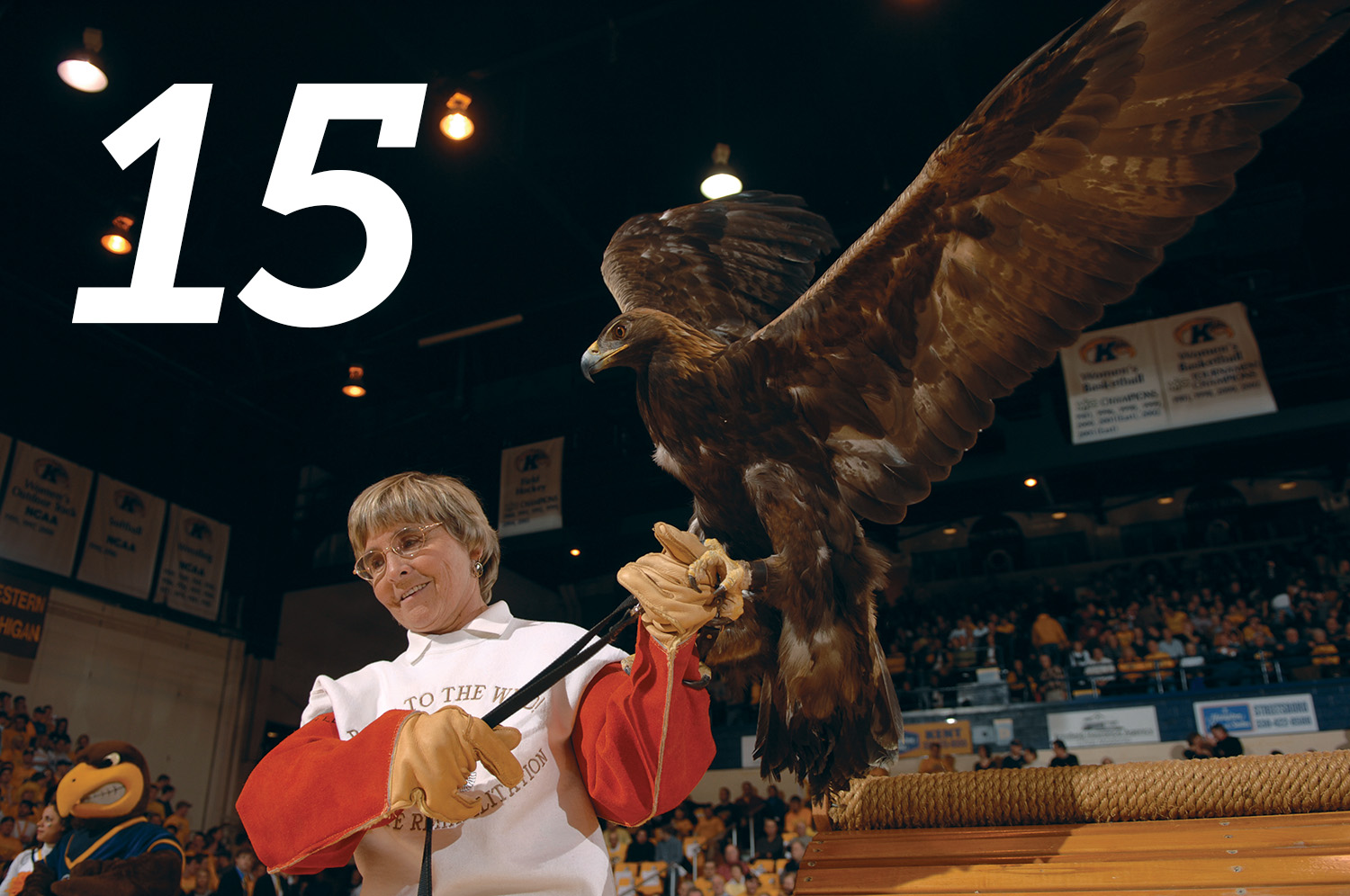 However, a representative from PETA, contacted by someone concerned about the eagle’s role at sporting events, writes a letter urging Kent State to use a costumed mascot instead. Rutger says the eagle preens its feathers and eats after the games, signs that it is not stressed. Still‚ she agrees that having a bird at a sporting event isn’t ideal (June 18, 2008 Summer Kent Stater).

“From what I understand‚ there are no plans to use a live animal as a mascot‚” says James Tunney ’15, who handles the scheduling for Flash in both human and inflatable form. “Life is easier with a human inside a furry suit. I think we’re going to stick with that.”

For more information or to hire Flash for a corporate or private event, contact ksuflashesmascot@gmail.com, call 330-672-3970, or fill out the Flash Appearance Request Form.