Live Chat
Doug Kirchner Jr., BA ’17, receives his diploma and congratulations from President Warren at the December 2017 commencement. He hopes to return to campus next fall to start a master’s degree in criminal justice.

When Doug Kirchner Jr., BA ’17, crossed the stage in December to receive his degree in applied conflict management with a minor in criminal justice—the first in his family to graduate from college—his wife, Katie, and three sons were there to cheer him on. 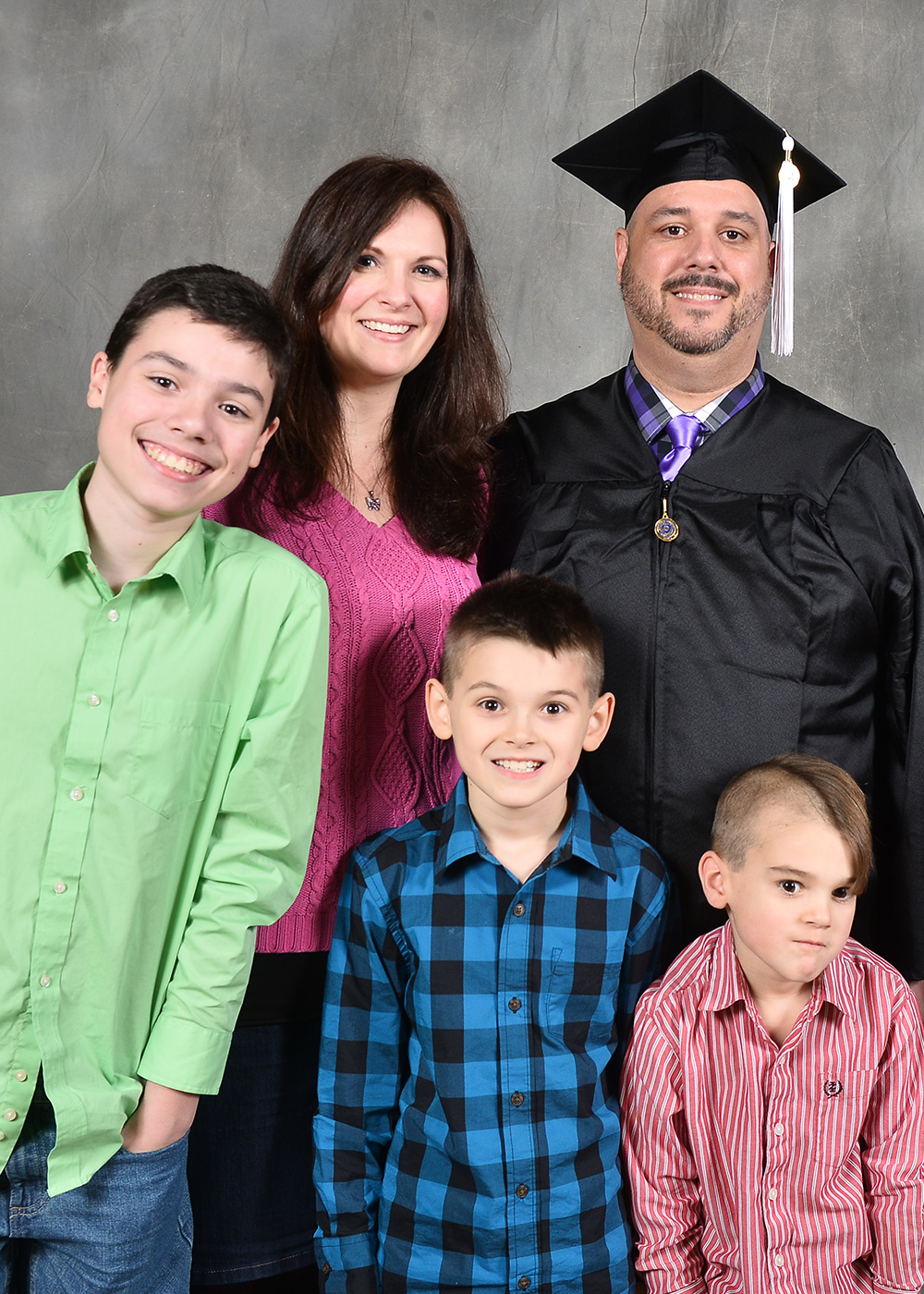 Skyler had started him on this path—before she died of brain cancer, she had made him promise to get his GED. “One day she asked me what I was going to be when I grew up,” he recalls. “I laughed and said, ‘Well, I’m kind of grown up. I’m in my thirties, I have three kids and one on the way, and there’s not much I can do because I never graduated from high school.’”

Dropping out of school in ninth grade—after years of struggling with ADHD, dyslexia and a learning disability that hadn’t been diagnosed until after he’d failed several grades—he started managing bands and promoting concerts in and around Cleveland. He married his first wife in 1997, had his daughter in 1999 and was divorced in 2001.

He had remarried, had a son and was working at a cellphone company when his daughter was first diagnosed with brain cancer at age 6. After several years of remission, the cancer returned, and by age 12, she was terminal.

Work went by the wayside as he helped take care of her, and after she died in November 2011, he had to file for bankruptcy. He began attending GED education classes with Project Learn of Summit County and earned his General Equivalency Diploma in June 2012.

He’d kept his promise to his daughter, and that’s where he thought his education would end. But at his GED commencement, he’d met some recruiters from the GED Scholars Initiative, located on the Kent Campus, which helps GED graduates transition to college by offering academic, financial and social support. “They called me up and invited me to sit with them for a week—before I knew it, I had signed up to enroll for a semester, just to try it.”

“I got my GED for my daughter, but to complete college, I had to start doing it for myself.”
—Doug Kirchner, BA ’17

It took him about four and a half years to complete his coursework, while working as a security specialist/investigator to help pay the bills. He credits his wife, caring professors and his “Lunch Bunch”—a small group of fellow students—for helping him make it through. “I got my GED for my daughter, but to complete college I had to start doing it for myself.”

“My heart is to change lives,” he says, “and to show juveniles who don’t have a voice that there is hope.”

Back to Flash Forward Winter 2018