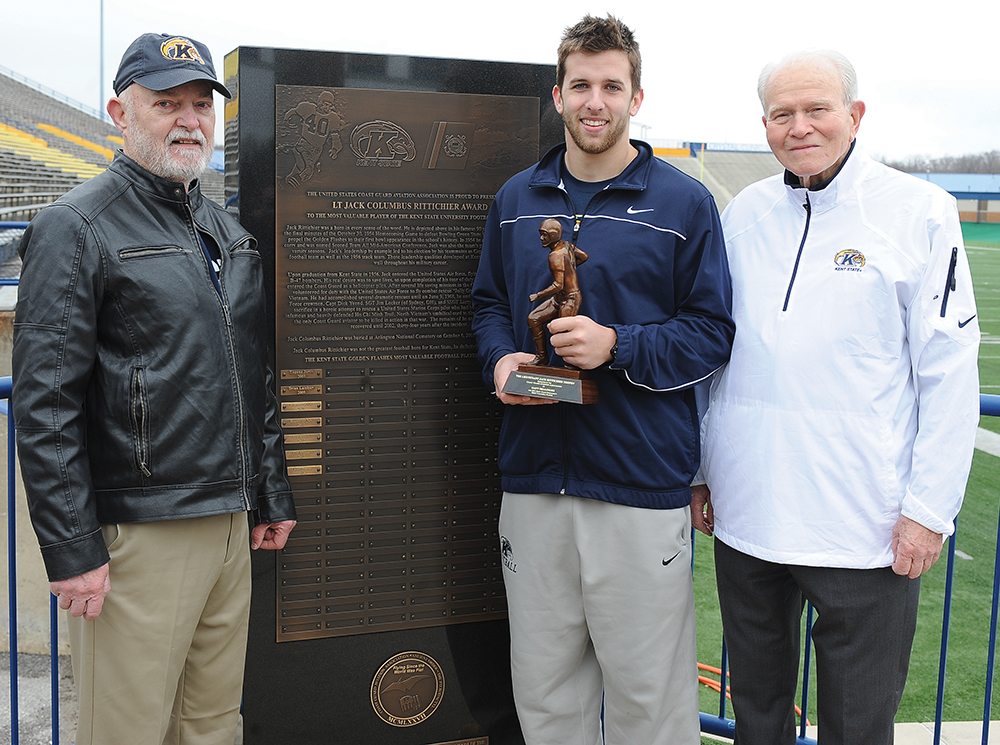 When Jack Rittichier ’56 attended Kent State, he was a big man on campus—captain of the football and track teams, chair of the Pork Barrel (a campus entertainment) and an officer in the ROTC. “He was James Dean and Marlon Brando all in one package,” recalls former football teammate Allan Kaupinen ’57. “When he walked across campus, you noticed him.”

Kaupinen has spent a good part of the last seven years making sure Kent State remembers Jack Rittichier—and not just for his 90-yard touchdown run against Bowling Green that propelled Kent State into its first bowl game, the 1954 Refrigerator Bowl in Evansville, Indiana.

That run made him a campus hero, but Rittichier became a national war hero, the only U.S. Coast Guard aviator killed in Vietnam when he was shot down during an heroic rescue mission in 1968.

The remains of Rittichier and his crew were recovered in 2002, and he was buried with full military honors at Arlington National Cemetery in 2003.

The former Coast Guard pilot who relieved Rittichier in Vietnam, Jim Loomis, interviewed Kaupinen seven years ago for a book he’s writing. They joined forces with the Coast Guard Aviation Association (CGAA) and Kent State University Athletics to honor Rittichier at a reunion of the 1954 Refrigerator Bowl team and to rename the football team’s Most Valuable Player award after him in 2009. The CGAA funded a Rittichier memorial in Dix Stadium and later a bronze Heisman-like trophy (based on a sculpture titled “Jack’s Run”) given to the team’s MVP each year since 2014.

View a video of the award presentation at kentstatesports.com.