As the heroin epidemic continues to make headlines and devastate communities across the country, Kent State sophomore public relations major Emelia Sherin found a way to help people better understand what’s going on, who is affected—and what we can do about it.

By Emelia Sherin, as told to Jan Senn

It all began because I was angry. In the news, I saw a photo taken in East Liverpool, Ohio, of a grandmother and her boyfriend passed out in a car from a heroin overdose, with her young grandson in the back seat.

As a public relations student, I thought, “Okay, they are building awareness, they are showing people what is happening, and it’s getting people talking.”

But as someone who has seen the tragic effects of this epidemic in my hometown, I was heartbroken, because the media was treating this like a circus. The people in the photo are human beings. My parents taught me to treat people with decency, respect and support no matter what, because you don’t know what they’re going through. The media was saying “this problem is happening,” but they weren’t telling you what to do about it.

That upset me, and I wanted to educate myself so I could educate others. A dear friend of mine is currently an addict; she’s transitioning into recovery, and it’s been hard to watch. I grew up with kids who are funny, intelligent, caring and compassionate—and then I’d see an obituary with their face and name on it.

I began talking with people all over northeastern Ohio about the heroin crisis—paramedics, current and recovering addicts, families, friends, complete strangers off the street. I talked with them face-to-face, because confrontation is key to communication. I started writing down what people were saying and recording it—their feelings, their experiences, their stories.

And then I thought, “I have all these interviews; what am I going to do with them? I can’t just write a news article or TV spot, because this needs more of an emotional connection. Why not theater?” Theater is up close and personal, and you can feel the emotions the actors and the audience are giving off.

I approached one of my professors, Stephanie Smith, who is such an amazing role model, and I told her, “Hey, I’m going to write a play.” She was supportive and encouraging, and has been there for me throughout this entire project.

After I wrote out all my scenes in an outline, I had no idea what format to put it in. I’d never written a play. However, I happened to sit next to Zachary Manthey in my Communications course this past spring semester, and I noticed he was always writing something on his laptop. So I asked him what he was doing. And he said, “I’m writing a play.” And I’m like, “No way. Me, too!” He showed me his format and taught me how to use Celtx, this free scriptwriting website he was using.

I am so thankful to have met Zach, who is majoring in digital media production. He became my cowriter. We locked ourselves in my apartment for three days, with nothing but pizza and coffee, and stitched together the stories and the characters. Probably six different interviews went into each character. We kept editing and thinking of little things to add here and there. That’s how we created (In)Dependent: The Heroin Project. The story line follows two addicts undergoing recovery. One successful and one really struggling.

We were fortunate to debut the play at the Akron Civic Theatre, especially since Akron is the founding place of AA’s 12-step program for recovery from alcohol and addiction. We only had two shows, but both were sold out and received standing ovations. The proceeds went to Orianna House Inc., a local nonprofit that provides addiction treatment, counseling and court-ordered correctional services, as did about five hundred dollars we collected in donations and about nine bags full of shampoo, toothbrushes, body wash, socks and shirts.

It’s awesome, because the show isn’t meant just to educate people about the epidemic on an emotional level, but also to reach out to those who give so much to the community and who are desperately trying to help.

I thought, “Wow, it can’t get any better than this.” Then I got a call from The New York Times who wanted to interview us. Zach and I met the reporter at Scribbles Coffee downtown and talked with him for hours. Then the next day we met up with a photographer. A week later, we were in The New York Times.

Two days after that, I got a message from [Hollywood writer and director] Chris Columbus, who grew up in my hometown and wanted to read our work. People have messaged me from California, Mississippi, Missouri, Massachusetts, New York and Pennsylvania, who are willing to pay for rights to the play so they can put it on at their colleges or local playhouses.

We had the play copyrighted, and it’s been shipped to Chris Columbus and to a couple of community colleges in New England and down south. Wherever it’s performed, we ask that the proceeds and donations go to a local rehabilitation center.

People think they’re going to get things done if they protest and sign petitions. And yes, you’re getting proof that people want to support it. But there’s so much more that you can do. You can raise money, collect donations, volunteer at a needle exchange or a rehabilitation facility. The important thing is to give back to your community and other communities around the world who are willing to listen, learn and understand this message and the truths behind it.

I’ve been amazed to see such a positive response, and I hope to continue educating people on issues like PTSD, domestic violence, and so forth. Kent State has not only helped me find my path, through my classes and campus activities, but I know that the people I’ve met here will be with me for the long haul. I’m beyond grateful for everything that’s happened and for the support I’ve received on this campus.

I’ve worked so hard and been so caught up in all these incredible opportunities that I didn’t have a chance to sit down and relish the moment until a couple days ago. My best friends told me, “Hey, you need to just sit down and enjoy it.”

Emelia on discovering her purpose at Kent State 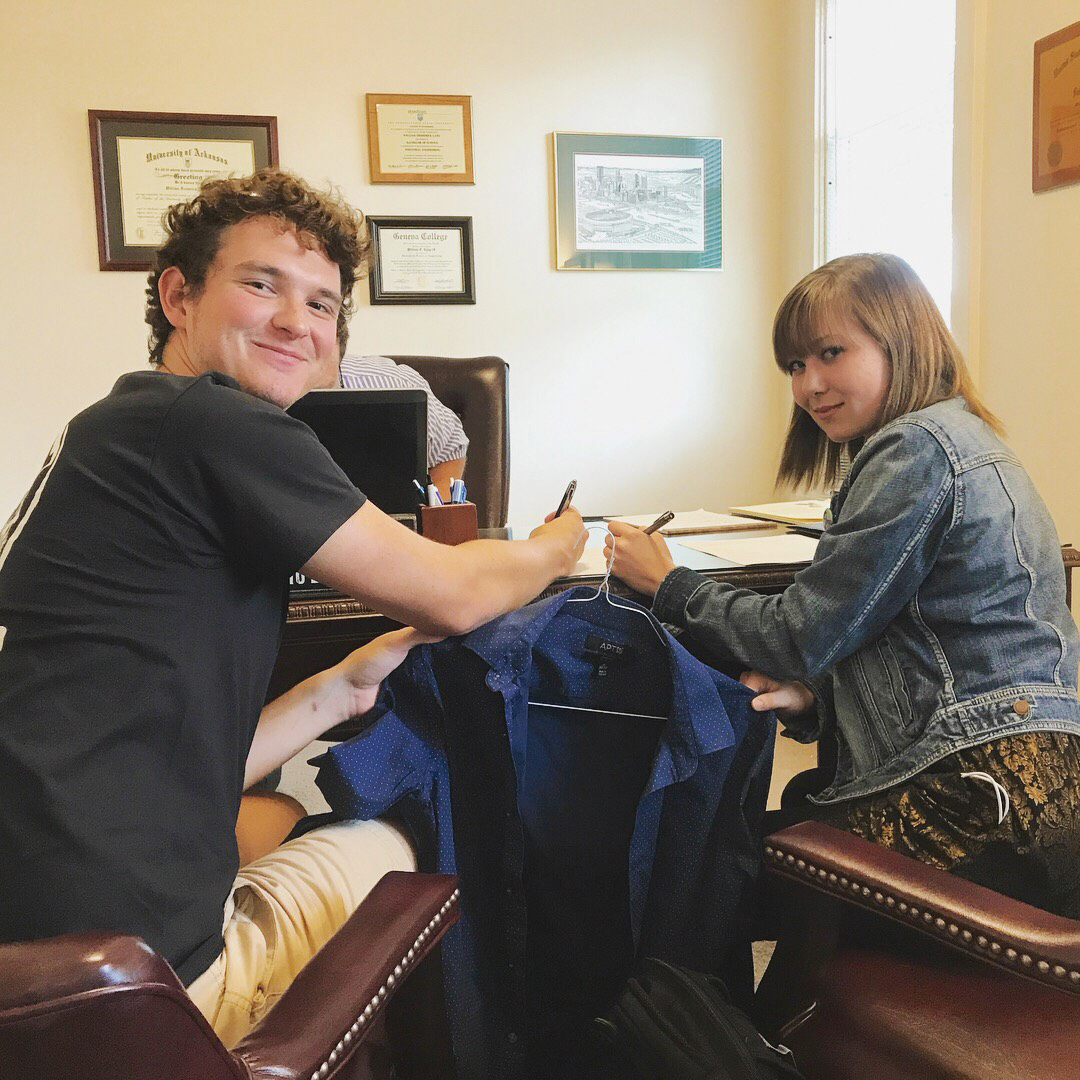 Cowriters and classmates Zachary Manthey and Emelia Sherin sign the copyright to their play, (In)Dependent: The Heroin Project.

WRITTEN BY:
Emelia Sherin, as told to Jan Senn