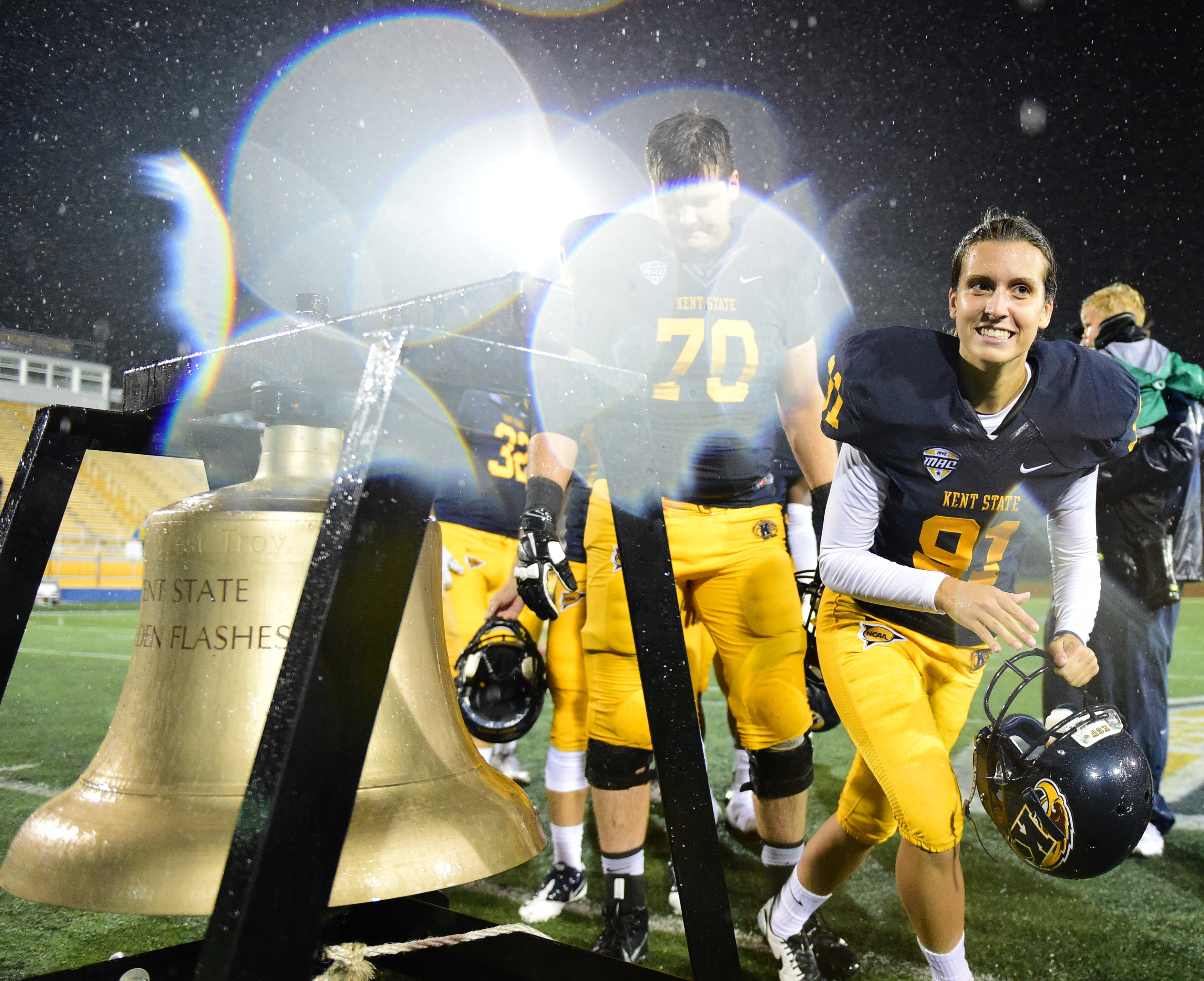 In September, senior April Goss kicked the extra point in Kent State’s win against Delaware State—and made history. As only the second female ever to score a point in a Division One game, Goss landed a spot in every local media outlet, as well as national coverage on the “Today Show” and a story in Shape magazine.

After the media frenzy died down, we asked Goss (who grew up in Pennsylvania and became Kent State’s first female football player as a freshman walk-on in 2012) to reflect upon her time on the team.

I grew up watching football and told my dad I wanted to try out. Playing soccer in high school helped me understand most of the techniques.

I thought kicking a football would be super easy. But I came to realize how technical it is. It’s somewhat like golf: Follow through (with your kicking leg) and keep your head down. It’s tempting to look where the ball is going, but someone once told me, “The crowd will let you know if it went through or not.”

It’s also a mental challenge. When performing the same motion continuously, it’s easy to psyche yourself out or let the emotions of a game get to you.

Being the first female on the team meant figuring it out for myself. My teammates made it easy, though, to adjust to the higher level of competition. They welcomed me with open arms; they treat me like their little sister.

At first, it was hard for me to put on weight and be okay with it. The coaches wanted me at a healthy performance weight, so I met with a nutritionist. Because I was so busy, I had to snack a lot during classes—and I gained about 15 pounds.

I constantly worked on my technique, staying after practices to make sure I was ready if the moment ever came.

I could think of a million reasons why I wasn’t going to achieve my goal, but I had to put those thoughts aside and stay positive as I waited for my chance to kick in a game. I took a step back and realized what I’d already accomplished. I didn’t think I would make the team, but here I am.

After I made the kick, it was a huge rush of joy and excitement. Getting to share it with my teammates was incredible. Team goals are just as important as individual goals—and truly satisfying.

It’s hard to think about what’s next; I’ve had this goal for so long. Right now I am trying to focus on my future. I’m looking at grad schools to study mental health counseling.