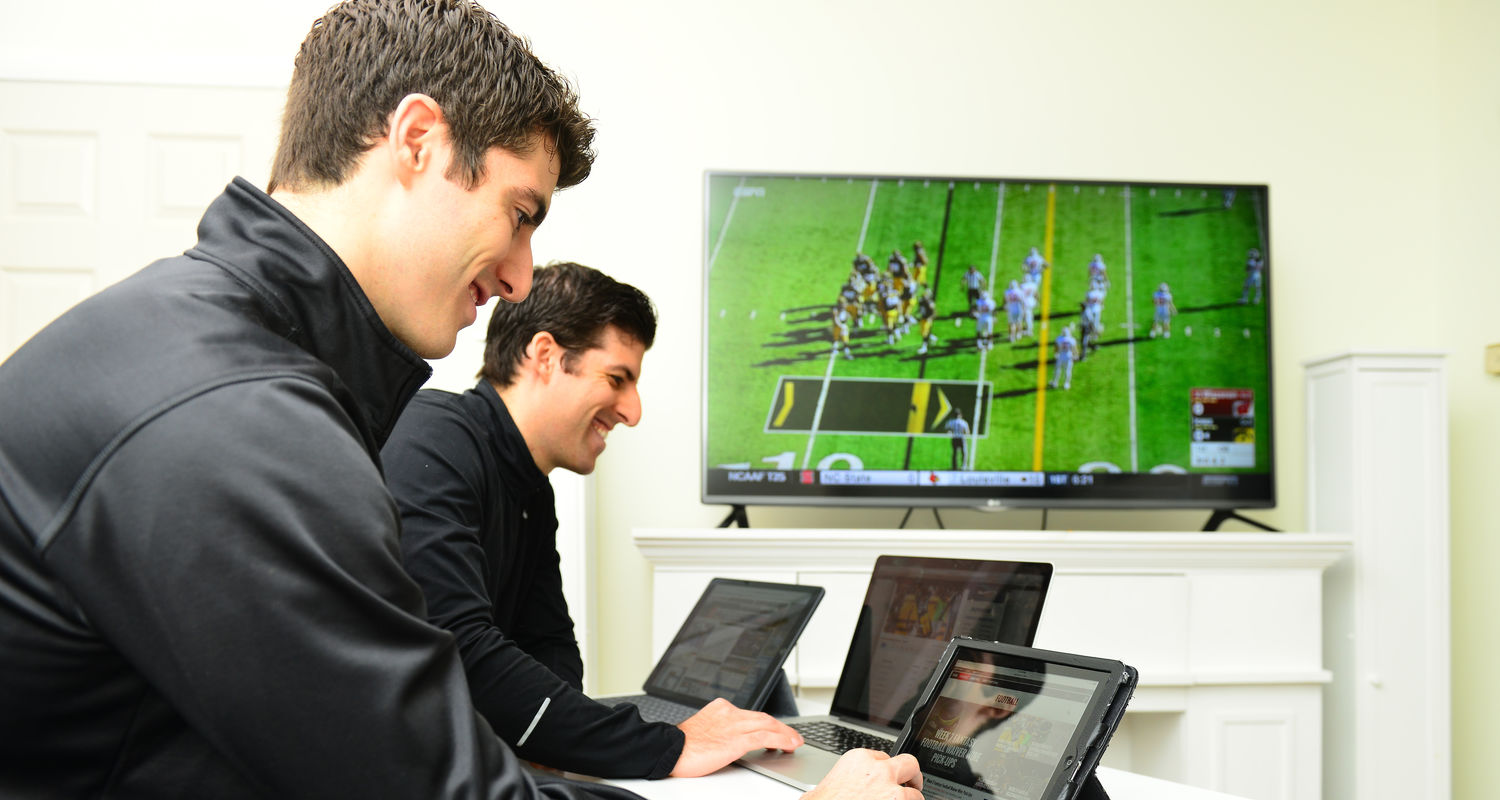 In a League of Their Own

Jordan Tozzi ’14 and his brother are experts in fantasy football leagues—and they’re happy to help you win yours.

For Jordan Tozzi, fall Sundays are all about food and fantasy football.

At his childhood home, parents Mike and Chris Tozzi (third-generation owners of Tozzi’s on 12th, a popular Italian restaurant in Canton) spend the morning preparing the family’s Sunday feast.

Downstairs, huddled away from the kitchen hustle and bustle, Tozzi and his older brother, Michael, systematically search the internet for information as another frantic NFL football Sunday approaches. The brothers, major players in the fantasy football craze, must assemble their lineups and player rankings for loyal followers who depend on advice from the Tozzis’ fantasy sports website, LegionReport.com, to position themselves for success each week.

“Michael and I get to my parents’ house early every Sunday so we can sit beside each other and go through the player rankings,” says Tozzi, who graduated in 2014 with a bachelor’s degree in organizational communication and a minor in flight technology. He is a pilot for Castle Aviation.

“Once the games start, we eat dinner in the kitchen and there are computers out everywhere. Then we go back downstairs, and we’ll have three games on at once. We’ve got a big screen TV, and my brother and I both have iPads. It’s almost like a big surround system.

“During games we’re constantly answering lineup questions from fans and followers on Twitter for the evening NFL games. We’re both in multiple fantasy football leagues, so we keep refreshing the live scoring to check our matchups. I wouldn’t say we’re in there going crazy, but we’re not super quiet either.”

Fantasy football competitors from all over the globe, however, have staged raucous touchdown celebrations thanks to advice provided by the Tozzis, whose expertise in the burgeoning fantasy field is widely respected.

With NFL football, the most popular element of the fantasy sports scene, contestants create their own ‘team’ by drafting players from a league and earn points based on the performance of their picks. In conventional fantasy football leagues—typically played for fun or for low dollar amounts just to make things interesting—contestants play different opponents each week. The top entries at the end of the regular season qualify for the playoffs, and a champion is eventually crowned, usually during the final weeks of the actual NFL regular season.

According to the Fantasy Sports Trade Association, 57.4 million people will play fantasy sports in 2016, creating a $3 to $4 billion annual economic impact across the sports industry. Wagering on fantasy sports is legal, since it’s considered a game of skill and not gambling.

Fantasy football started to gain popularity in the 1990s, continued to grow through the next couple decades, then exploded in recent years when companies began to offer daily fantasy sports opportunities. Instead of drafting a team once before each season, contestants on the FanDuel and DraftKings websites can draft a different team each week. For as little as $20, competitors get a shot at monetary prizes that reach as high as $1 million.

Before they were teenagers, fantasy sports had already piqued the interest of the Tozzis. “My brother got me into it pretty early,” says Jordan Tozzi. (His brother, Michael, graduated from Malone University and works in pharmaceutical sales for Eli Lilly and Company. Both reside in Magnolia, Ohio.) “We have a bunch of older cousins, and we would always play them in fantasy football leagues. We loved it—and by fifth or sixth grade, I was beating all of them.”

Right about the time the daily fantasy contests began to take off, the Tozzi brothers officially entered the fantasy sports profession. “During my freshman and sophomore years in college we were doing all this research for our fantasy football leagues, and we thought, why not publish it online and try to make some money off of it? So we did that,” says Tozzi. “Friends were always asking us for advice, and we would tell them to just check out our website.

“The first year we had the website, in 2013, we entered an NFL fantasy football contest where they grade all your rankings, and we were ranked the most accurate fantasy experts in the world. We beat guys from ESPN, CBS Sports, Yahoo. It kind of blew up from there.”

Just like that, LegionReport.com became a destination site for fantasy football enthusiasts all over the world. “Since then we’ve built a large following online and on Twitter,” says Tozzi. “People view our website from Europe and all over the United States. You initially do something to help your friends, and it explodes. That’s the awesome part about it.”

While the Tozzis concentrate their energies on NFL football, friend and fellow Kent State graduate Danny Stokes ’13 contributes to LegionReport as an NBA basketball writer. They may eventually expand the website into other sports, but at this time its focus is pro football and basketball.

“The first year we had the website, in 2013, we were ranked the most accurate fantasy experts in the world. It kind of blew up from there.”

Guidance from LegionReport.com is not only beneficial, but free as well. “People don't have to pay us for a service,” Tozzi says. “The only way we make money is from Google, the ads on our page and link advertisements within the articles. We just want to help people win their fantasy leagues.”

The Tozzis’ main goal in the future is simply to continue adding followers. They provide advice each week on who to play and which free agents to pick up, and they suggest a lineup to enter in the daily NFL fantasy contests. “We communicate with our followers via Twitter (@LegionReport), if they have specific questions,” says Tozzi. “We also draft fantasy football teams for owners.”

Delving through mounds of constantly changing information each week to give the best fantasy football advice possible has become a labor of love for the Tozzis.

“It takes a lot of hard work to produce consistent results, which is the key to long-term success in fantasy sports,” says Tozzi. “Michael is up early in the morning, and I’m up late at night, so we’re always up to date on the news. Throughout the week we text each other and communicate during the Thursday and Monday night games. The system seems to be working.”

As children, the brothers learned that hard work and preparation are keys to success, no matter the occupation. “Our family restaurant is in its 102nd year and has always been a huge part of our lives,” says Tozzi. “When I was young, my parents had me do little jobs, like putting dishes away. As I grew older, my responsibilities increased. My brother and I have worked every position at one time or another—doing dishes, prepping, cooking, serving, bartending, cleaning. I learned the value of hard work, determination and dedication from my parents.”

The Tozzi brothers apply those family lessons to winning at fantasy sports—and the results speak for themselves.

Allen Moff is the Kent State athletics beat writer for the Record-Courier newspaper.