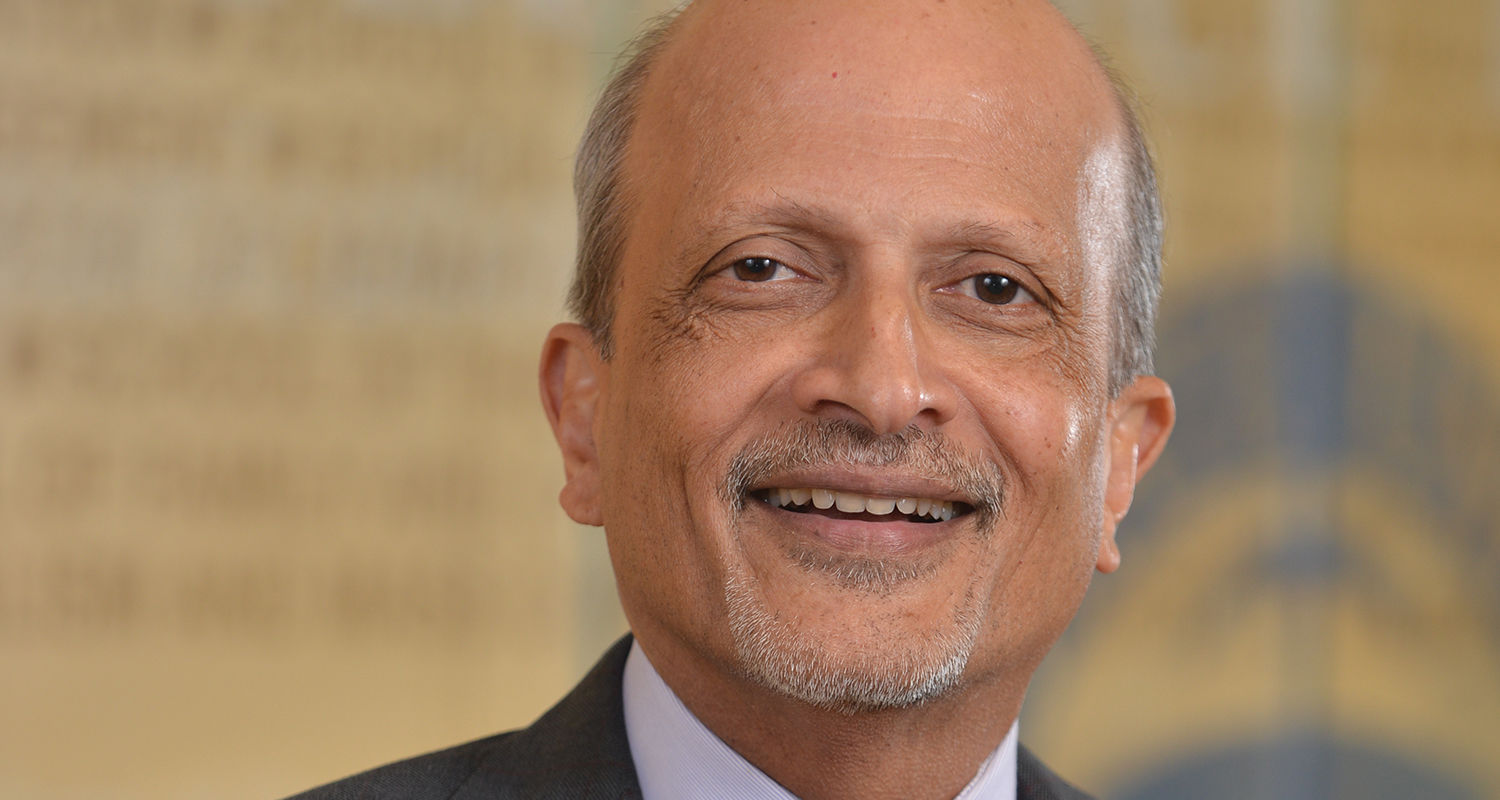 Renowned software business expert and angel investor M.R. Rangaswami on what he’s learned about getting an education, building wealth and giving back.

When M.R. Rangaswami, M.B.A. ’78—the youngest in a family of seven children who grew up in Madras (now known as Chennai), India—first came to Kent State in 1976, he had $8 in his pocket, all the Indian government allowed for those leaving the country, plus a $100 bill his brother had slipped him.

His sister-in-law had given him pots‚ pans and spices he needed for cooking vegetarian meals, but the Greyhound bus he took from New York to Kent lost them. When he met his host family and told them what happened, they went to Kmart and bought him more pots‚ pans and any spices they could find. “The warmth of Kent State stood out from day one,” Rangaswami recalls.

Forty years later, after making a fortune investing in tech start-ups, he returned to Kent State from his home in San Francisco to be this year’s speaker at the Michael D. Solomon Entrepreneurship Speaker Series in March, hosted by the College of Business Administration.

Cofounder and CEO of Sand Hill Group, a software consulting and investment firm, Rangaswami recently was named one of 100 leading influential business leaders by the Association to Advance Collegiate Schools of Business, an international accrediting agency. He also has been profiled on the front page of The Wall Street Journal and has twice earned a spot on the Forbes Midas List of the world’s smartest tech investors.

We adapted his speech, “The Nexus of Entrepreneurship, Mentorship & Philanthropy,” to highlight some of his most memorable lessons from different phases of life.

Explore opportunities. In India I did my undergrad in accounting; then I went to law school. I was disillusioned and trying to find my way through life. My brother offered me the opportunity to come to the United States, and I took him up on it.

Talk with your counselors. I had great professors and took a lot of classes in marketing and operations management. But I wish I had talked to my counselors more about what I could be doing. When I graduated, I had to face reality: I didn’t have a job.

Participate in extracurricular activities and clubs. Build your résumé so that when you receive your degree, you can actually get employed.

Do at least two or three internships. I learned this lesson the hard way. My campus jobs were in janitorial services and as a part-time research assistant; neither helped me get a position after I graduated. I was told there were a lot of jobs in Texas, so I went there, and I had a manufacturing job within two weeks.

Be willing to take risks. After I worked my way to management in the manufacturing company, I met a consultant who told me I should go to this place called Silicon Valley. That was my life-changing moment—it was 1982 and there was no internet to find out what to do or where to go. So I took a step and applied to every company I could find in the phone book in Silicon Valley. I was fortunate to get a job testing business software with a start-up there.

Don’t expect to know when you’re going to be successful. Three years later, the company went out of business. My old boss went to Oracle and told them about me, and I got hired there. Within four years, I was the vice president. It became a billion-dollar company, and we were getting double the budget and double the staff. It was great, except I wanted to be an entrepreneur again.

Find a mentor. You can talk with them about what you want to do, and they can give you good advice. Having someone who looks out for you and likes you really makes a difference.

Fail fast, so you can learn from it and move on. I quit Oracle and took a 40 percent pay cut to work at another start-up. I wanted to be the founder of a company. While I was there, that company also doubled every year. Three years later, the company went into Chapter 11. When you’re younger, you can risk not having money in your pocket. But be prudent. When you’re married and have kids, you’re at a different phase in life.

Build your network. A company I had kept in touch with called me and said they were thinking of going public in six months. So I had  my Super Bowl moment  —I ended up doing the road show, presenting to investors; we traveled to 30 cities in 25 days. The first day it went public, the stock market cap was 1 billion dollars. About 18 months later, my stock, which I’d gotten at 25 cents a share, was at 50 dollars a share. When I left that job (after traveling 300,000 miles in a year) to do something different and take time to have a family, I had 4,000 contacts.

Invest in other people. When I retired in 1996 at age 41, my wife and I took a holiday and talked about what we should do next. I found out that some small start-ups in Silicon Valley were looking for money. I started talking to them and became what is now called an angel investor—someone who invests their own money in a start-up and helps it become more successful. The Wall Street Journal sent a reporter to live with me for a few days. That’s when I got my 15 minutes of fame —the story was on the front page [in 1997], and I received over 1,000 phone calls in one week.

Be prepared to make mistakes. I’d be a billionaire if I’d invested in some companies I passed up. But you can’t let that hold you down. The key thing is to learn from your mistakes.

Give back more than your fair share. It’s not just about giving money, it’s about giving time and services. I meet with at least one entrepreneur a week, to hear their business plan and give them feedback. And I’ve been doing that for the last 20 years. At first I thought maybe I should make money off this because people would pay for it, but I decided to give back my time.

Just do it. There will be many times when you debate, “Should I do this?” Just go do it. It’s a leap of faith but you have to take that leap. Otherwise you could miss an opportunity. My accountant calls my work legalized gambling. I’ve done 40 start-ups; 20 of them have gone belly up, but 5 have gone public and 5 have been acquired. The other 10 are still around and hopefully some of them will do well.

Think long-term. People these days expect instant gratification. To make a real impact takes a long period of time. Don’t take on something if you’re not willing to commit 5 or 10 years of your life to it. It’s not worth your time. If you take it on, give it your all.

Have your own metrics for success. Don’t compare yourself with other people and how well they are doing. What are your goals in life? Measure yourself against your metrics, what you want to do with your life.

Forgo ‘quid pro quo.’ One thing I’ve learned throughout my life—and something I have made my mantra—is that when someone comes to you for help, don’t have an agenda and don’t ask for anything in return.

Start when you’re young. Volunteer early on. Don’t wait until you retire. My biggest regret is that I didn’t give back during the other phases of my life. I could have started earlier.