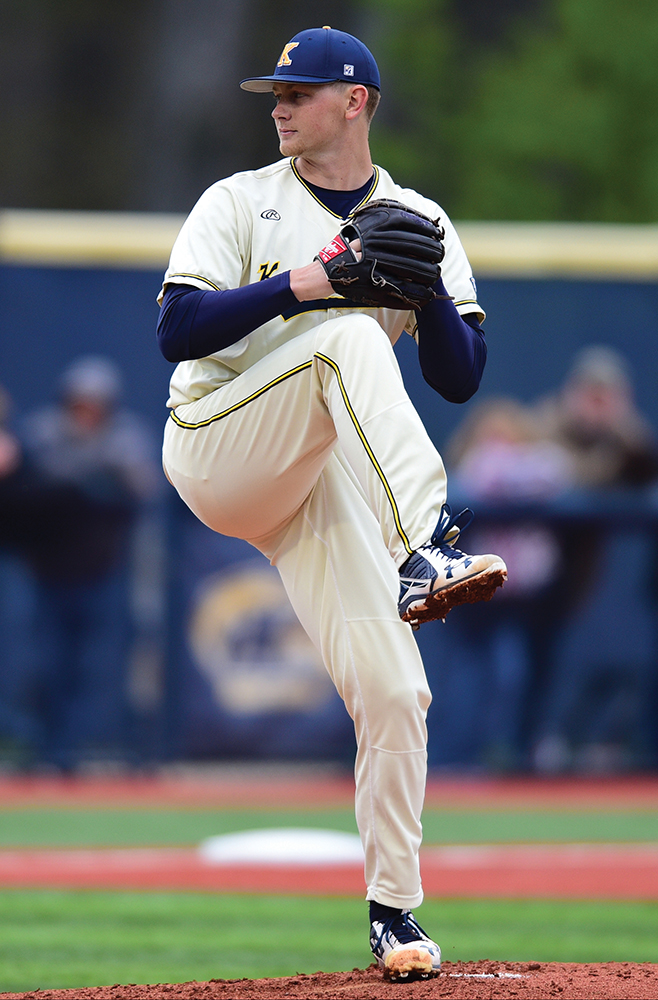 Kent State left-handed pitching star Eric Lauer ’16 is known for being cool, calm and collected on the mound, but even he expressed excitement over learning he was selected by the San Diego Padres in the first round of the Major League Baseball First-Year Player Draft in June, going as the 25th overall pick.

“This is a dream come true,” says Lauer. “To be drafted in the first round has always been one of my goals, and it’s a bit surreal to have it actually happen. I’m really excited to be a part of the Padres organization, and I can’t wait to work on my next goal of making it to the major leagues.”

“He elevated himself quite a bit,” says pitching coach Mike Birkbeck, who in 20 seasons at Kent State has had many pitchers advance to the major leagues. “He’s got great aptitude. You can suggest something, and he has the ability to take those words and put them into action.” That “coachability” will allow him to pitch a long time, Birkbeck predicts.

“These past three years have been a lot of fun, and I truly believe choosing college out of high school was the right choice for me,” says Lauer, who graduated in May with a degree in business management. “I hope to make Kent State proud.”

Eric Lauer: By the Numbers

Feedback
And the winner is...
Pathway to Peace
Pacifique Niyonzima lost most of his family during the 1994 Rwandan genocide. Now he is earning a graduate degree in higher education administration...
On The Map: Bea McPherson Charted Course of Women Mapmakers
As the United States entered WWII, trailblazing women like Bea McPherson, BS ’43, took on the task of providing essential handmade maps for the war...
Kent State Magazine
Street Address
P.O. Box 5190, Kent State University, Kent OH 44242-0001