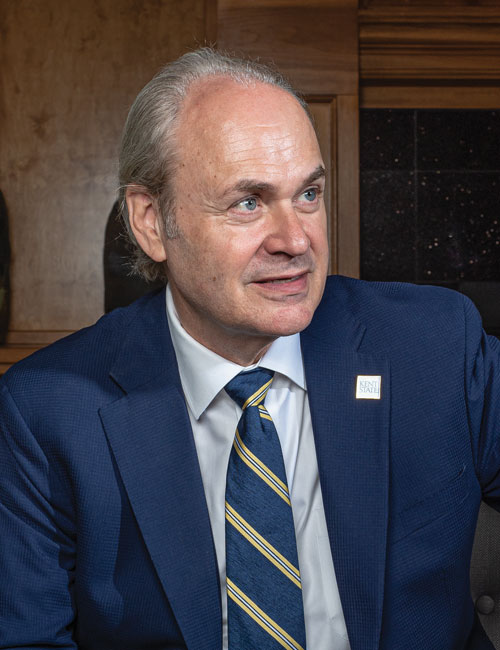 Great waves of change had rolled across college campuses by the fall of 1969. Enrollment at Kent State that year exceeded 21,000 students, up from just 9,600 in 1960 and 5,800 in 1950. Two university presidents, Bowman and White, oversaw the entirety of this growth and change, serving 27 years in total, back when lengthy presidential terms were the norm.

And northeast Ohio was booming. Cleveland was booming. Ohio was booming—as the region, city and state filled the nation’s appetite for steel, automobiles, consumer goods and food. Students, the children of the area’s immigrants and African-American migrants, flooded into Kent State, many of them the first in their families to attend college.

The population of Kent, Ohio, was also growing, its economy driven more by local industry than by the university. One could still shop downtown at hardware stores, grocery stores and men’s and women’s clothing stores. Nixon’s silent majority walked Kent’s tree-lined streets, and politics leaned conservative. In the 1968 election, 55 percent of voters in Portage County voted either for Nixon (41 percent) or Wallace (14 percent).

Into this mix of young and old, liberal and conservative, working class and college educated, the currents of greater America entered Kent and Kent State. In 1968, Kent State women stepped outside of their dorms at midnight to protest antiquated curfew regulations that applied to coeds (a term from the day) of all ages, but not to men. It didn’t seem fair, one senior told the Daily Kent Stater, that freshmen boys didn’t have a dorm curfew, but she did.

Meanwhile, musical tastes were changing as well, and a young musician, Joe Walsh, who attended Kent State from 1965 to 1967, played on campus and in the town’s bars, first with his group The Measles, and then with the James Gang.

The generation gap widened. Political currents swelled. Impassioned students, inspired first by the Civil Rights Movement, challenged assumptions and protested the war in Vietnam. Things heated up. Student groups occupied part of a building to protest the Oakland police department recruiting on campus due to their suppression of minorities.

It got rough as students were threatened with arrest at this and subsequent events.

Meanwhile, townspeople and many students defended the status quo, and the Daily Kent Stater reported ball bearings being thrown at campus protestors by counter protesters and pushing and shoving at antiwar events on campus. As throngs of Kent State students marched through downtown to protest the Vietnam war in the fall of 1969, Kent residents stood on the sidewalks holding signs supporting the war effort. One grandmotherly woman’s sign read, “What a Glorious Day for Our Communist Enemies!”

By spring 1970, the war caused polarization to reign. Yippie leader Jerry Rubin had recently spoken on campus, as had SDS organizer Bernardine Dohrn a year earlier. Dohrn urged revolution during her speech on campus. So, too, had Mark Rudd when he spoke at Kent State, fresh from leading the occupation of Columbia University. Only violence could stop a violent war machine was their message. Police were called “pigs.”

Townspeople were leery of students, and their discourse was equally polarized. The students were lazy, they walked barefooted, they didn’t bathe or cut their hair. They were hippie freaks. People were angry and increasingly afraid. You were on one side or the other. Oppositional battle lines were being drawn, to paraphrase one popular song from the era.

And then, on May 4, 1970, what many feared happened. Four dead in Ohio. How did it occur? Why Kent State? How could we reach a point where students could be shot by the National Guard on their campus? How to understand this explosion of violence and death? How to understand why the guardsmen shot protestors at a peaceful rally, where just a few rocks were thrown, nothing more?

Few thought they were in danger that day, so much so that many Kent State students were walking to and from their classes during the rally. Such was the case of Sandy Scheuer, struck and killed by a guard bullet while on her way to class, books in her arms.

Many people, much more experienced and knowledgeable than I am, have tried to answer these questions. My reading of events, both as the current president of Kent State University and as a historian, points to the dangers of polarization and poisoned discourse as important lessons to be drawn from our tragedy.

The demonizing language of the day, you weren’t just wrong, there was something wrong with you if you disagreed with me, can be seen in the rhetoric on all sides. When people made outlandish claims about threats to public safety, there were audiences ready to believe that snipers were on the prowl and that Kent and its good citizens were under attack.

“Sadly, polarization and poisoned discourse have returned to America, making Kent State and May 4, 1970 more relevant than ever.”

Sadly, polarization and poisoned discourse have returned to America, making Kent State and May 4, 1970 more relevant than ever. People once again believe outlandish claims and conspiracy theories—this time fueled further by the power and speed of social media. People today threaten their opponents with lightning-fast speed and global impact.

To this day it isn’t clear why the Ohio National Guard opened fire. What is clear is that the students did not expect an attack, and in the first seconds of the shooting many students assumed the guard was shooting blanks. What also is becoming clear is that violence often explodes in a clash of supposed enemies. At Kent State we know what happens when reasoned discussions and respectful dialogue break down. People die. That’s what happens.

So what to do? At Kent State we try to live by our core values, a primary one being that we will act with kindness and respect in all we do. We celebrate free speech, for our students were gunned down exercising that right. We encourage our students to expand their skills of empathy and compassion. We ask each other to listen, really listen, to others whose views are different from their own. We allow students to paint our famous rock on the front campus with political slogans from the left and right. We aim for tolerance. It is tough to do in the current environment.

Only a few weeks ago, Kent State students and professors were walking by Taylor Hall. Cars were parked in the Prentice Hall parking lot, but not on the sites where the four students were killed. Members of the campus community mingled and talked. They noticed—we all notice, we always notice—the memorials marking where four of our students were shot and killed on May 4, 1970.

Events, projects and programs to culminate our yearlong commemoration of the 50th anniversary of May 4, 1970 were proceeding. We looked forward to welcoming you to the Kent Campus again—to join us in a silent, candlelight march and vigil to honor the dead and wounded, to hear about the four slain students and recall the war that many had come to oppose, and to remember the lessons of the shootings on our campus.

And then came the coronavirus crisis—causing us to close our campuses, cancel commemoration weekend events and postpone commencement ceremonies. We began a new chapter in the history of remote instruction at Kent State that harkens back to the roots of Kent State Normal College as a correspondence and summer school in the first years of our existence, and to the heroic efforts of faculty and staff to conclude the academic term after the shootings closed campus in 1970.

We will get through this crisis, as we have done in the past. And as our 50th commemoration year comes to an unforeseen close, I trust we will turn the lessons of the Kent State shootings into a legacy of reflection and remembrance.

In keeping with the commitment to honor and remember the events of May 4, 1970, Kent State University will have an online “virtual” program to mark the 50th Commemoration with a variety of online videos, exhibits and learning resources, starting on May 1, 2020. A special video tribute will be posted at noon on Monday, May 4, 2020, and also will be archived on the site for viewing later.