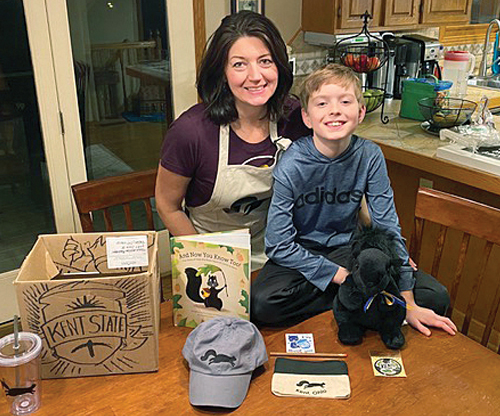 And the winner is...

Congratulations to co-winners Stacy (Fisher) MacGregor, BBA ’90, Dublin, Ohio, and her son, Lachland, who is 9 years old and in the fourth grade. The two teamed up for the squirrel search and were “totally stoked” when their names were selected in the random drawing of correct submissions.

“We loved reading the book and all of the other black squirrel goodies,” says Stacy MacGregor, pictured at right with Lachland and squirrel-themed swag from McKay Bricker Framing & Black Squirrel Gifts in downtown Kent. The book pictured, And Now You Know Too! The story of how the black squirrel came to Kent, is by Kathy Frazier, BA ’70, MA ’75, EdS ’81, and Deborah Walker, MA ’78.

The three black squirrels hidden in the fall/winter 2019-20 issue are found on page 7 (on the stand in the glass blowing photo), page 25 (in the dark curly hair near the headset band on Oden Oraelosi’s head) and page 34 (in the top right photo, between the curb and the 1969 Oldsmobile).

Thanks to all who entered!

Reflecting on May 4, 1970
President Diacon’s comments on the 50th anniversary of May 4, 1970 are reflective and somber [fall/winter 2019-20, “A Dialogue with President Diacon,” page 12]. As a 1969 graduate of the Kent State School of Business [now the College of Business Administration], I remember well hearing for the first time of the May 4th shootings. As a young US Naval Ensign, I was aboard my ship undergoing training at the Guantanamo Bay, Cuba, naval station, preparing to deploy overseas. The news came via newspapers and magazines; there were no computers, no cell phones, thus no social media.

There had been a few sit-ins, by nonstudents, and a few demonstrations by the Kent Committee to End the War in Vietnam, but nothing of great magnitude, as very few of the [almost] 22,000 students participated. Kent State had a fairly conservative student population by today’s standards, with many of the students coming from the suburbs of Ohio; they simply wanted a solid education to prepare themselves for their life ahead.

My heart was saddened; such a quiet and wonderful institution deserved better, much better.

Dink Date Debate
Over the weekend, I was with a group of KSU alumni, and we used the KSU trivia quiz [fall/winter 2019-20, “So You Think You Know Kent State?” page 15] as a group game. Question 6, about the dinks, is why I’m writing. The answer says the last incoming freshman class to receive dinks was in 1968. I was in the 1969 cohort, and we most definitely received dinks. In fact, I still have mine!

I was not able to attend a summer orientation session, so my orientation took place in the days just before students moved in for fall term. We must have been told the “rules,” i.e., if an upperclassman caught you without your dink on, that upperclassman could make you do something, most likely humiliating, like scrub the metal seal [of the university] in the pavers at the front campus gate, on your knees, with a toothbrush.

The dink “threat” caused me to take several hours to walk all over campus, map in hand, to learn my way around. I remember the sandals I was wearing, and I remember the blisters I had! My thinking was that if I knew my way around, I would be less likely to be identified as a freshman. Which means, of course, that I refused to actually wear the dink! (I’ve always been a bit of a rebel.) 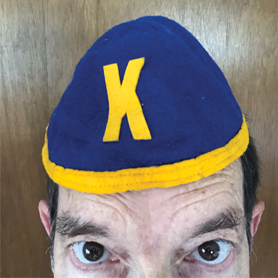 ate Magazine and, as a graphic design major, I think it has great design and content. But, your current fall/winter issue included a quiz answer that said the last year the freshman dink beanie was issued was 1968. I was “lucky” to still get mine in 1969 and still have it! [See photo left.]
Go Flashes!

We believe the correct answer is not 1968. My freshman roommate and I were housed in Manchester Hall, which was a men’s freshman dorm in 1970. On a Friday in September, freshmen were encouraged to attend a rally between Clark and Allyn. At that rally, we were all presented with our freshman dinks and told of the traditions. That is not to say we honored the tradition of wearing them around campus, but my freshman roommate from 1970 still has his and mine is still in my memory. So, we are either two years older than we think or your records are in error.

Editor’s Note: According to the quiz, the “correct” answer to question 6 (“What year marked the first time a freshman class was not issued dinks?) was D: 1969, and the answer stated, “The dinks tradition ended in 1968.” At least, that’s what we thought! That year appears in the caption of a photo on Kent State’s Digital Archives, titled “Freshmen in Dinks”, which includes this description: “According to A Book of Memories, ‘Small blue-and-gold skullcaps called “dinks” were part of Kent State’s tradition of freshman hazing until 1968.’”

We reached out to Special Collections and Archives staff, who did more digging. Page 20 of A History of Kent State University: Nearing a Century of Kent Pride by William H. Hildebrand, Professor Emeritus of English, states, “Another tradition ended, in 1967, when freshman wore dinks for the last time.”

An article, “Many Old Kent State Traditions Now Defunct,” in The Daily Kent Stater, May 9, 1969, states, “Included with Freshman Week is the wearing of the Freshman Dink. Wearers of these ‘caps’ must dink for all upperclassmen. But this idea seems to be falling by the wayside. It was originally intended to last until the Golden Flashes won their first game, but Freshmen only wear the dinks for one week now.”

“It does seem that many traditions slowly peter out and thus the end is up for debate,” says Katie Clements, adjunct public services librarian at Special Collections and Archives.

Thanks to alumni firsthand accounts, though, a clarification has been added to the digital archives photo description, as follows: “However, alumni report of the tradition continuing in 1969 and in 1970 (without enforcement of dink ‘protocols’).”

Don’t Forget Trumbull!
I was enjoying the “Check It Off” list in the recent issue of Kent State Magazine [fall/winter 2019-20, page 28], but I was sad to see that the Trumbull Campus was not included in the Regional Campus section. I used to attend Trumbull when I first started my undergraduate degree here at Kent State, and I was looking forward to seeing what fun items you had listed for my old campus. I couldn’t help but notice the question at the end stating, “What did we forget?” and I figured I’d let you know that you forgot the Trumbull Campus!

Editor’s Note:  So sorry about that! Last year we had students reach out to all the Kent State campuses, but we never received an answer from Kent State Trumbull. Since the story didn’t run until many months later, in the rush of deadlines I forgot that we hadn’t heard back from Trumbull, and no one noticed the omission on the proofs.

When I asked B. Nicole Perry to share what fun items she would list, she responded: “It’s been a little while since I’ve been to the Trumbull Campus, so I apologize if any of these things are outdated: Read a copy of Trumbull’s art and poetry magazine, ICON. Play a game of pool in the Student Union lounge. Visit the Link Art Gallery. Attend a free theatre workshop at the Trumbull Theatre.”

We added her items to the online bucket list, and if other Kent State Trumbull students or alumni would like to submit suggestions, we’d be happy to add them to the list.

Long-time Reader
Terrific issue!!! As a long-time alumnus, and with a similarly long history of leafing through each and every issue of Kent State Magazine, I just wish to say that I think the fall/winter issue featuring President Diacon to be especially well balanced and engaging. Way to go.

Making Travel Plans
Thank you for your repeatedly excellent magazine. I look forward to every issue and enjoy reading about the diverse activities and areas of research. I am a 1970 graduate and would like to travel to Kent State’s 2020 homecoming. Since it will probably draw a large number of graduates, I’d like to make my hotel reservation soon. However, I am having a problem finding the date for homecoming. Would you be able to tell me which weekend it will be? Thanks for your help!

Editor’s Note: Turns out, settling on a date for Homecoming is a little complicated. First, the final home schedule has to be confirmed with the National Collegiate Athletic Association and the  Mid-American Conference. Once dates are solidified, multiple parties at the university—including institutional advancement, athletics, student affairs and government and community relations—meet together to determine a date for Homecoming that works best for the university, in coordination with the city of Kent. As of press time, because of the pandemic, the date of Homecoming is now on hold.

Categorical Acclaim
I found myself recognized in the Kent State Magazine, which is pretty cool [fall/winter 2019-20, “Class Notes,” page 40]. Those who know me well know that my years going to school at Kent State University and living in the city of Kent were the best times of my life.

There aren’t many places or things that I’m attached to, but walking on that campus is something that I’ll always cherish. The friendships I made, the things I learned—more so life lessons than classroom education—are everlasting.

Sometimes I wish I lived back there, but I wanted to expand my horizons and grow, and I guess cat rescue is the latest extension of my growth. As an @ksualumni, I will give back whenever I can.

We want to hear from you!

Responses may be edited for style, length, clarity and civility.