A River Runs Through It

A small group of kayakers sponsored by Kent State University calls attention to the Cuyahoga River as a shared regional asset for education, recreation and sustainability. 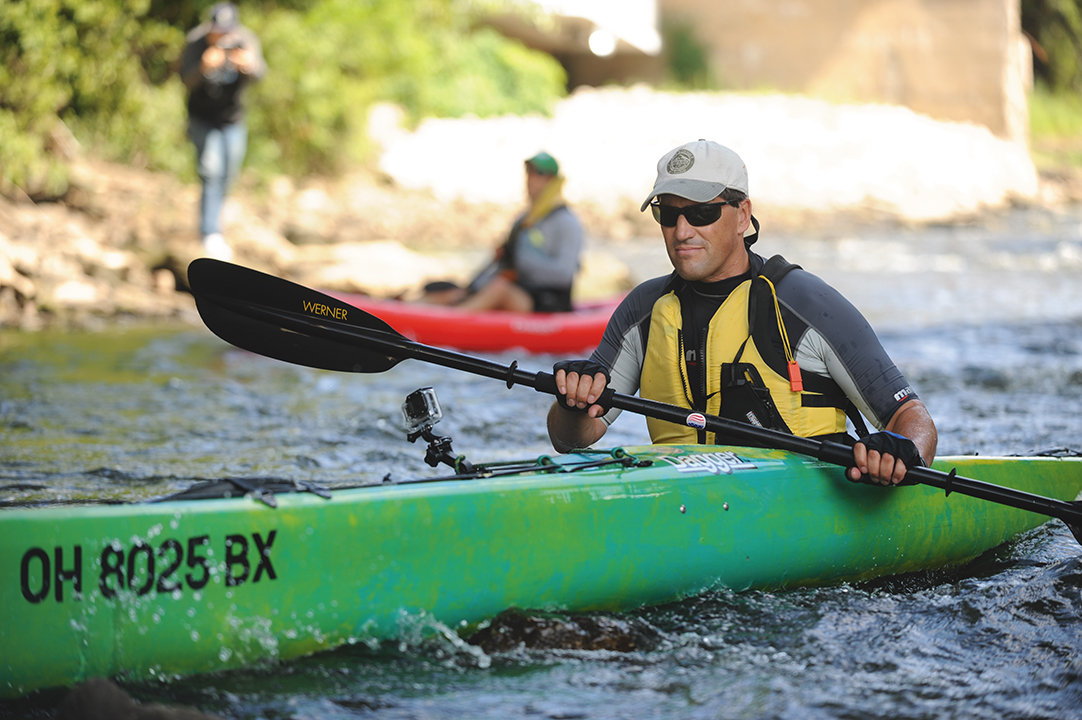 My kayak’s bow splashes quietly through the river, my knuckles skimming the surface with each paddle. The water feels warmer than I expected. It doesn’t smell bad, either, just a mild mix of mud and ripe, midsummer leaves. Yet this is the infamous Cuyahoga River, once so polluted it caught fire repeatedly. Its last blaze, in 1969, drew so much attention it resulted in a number of water pollution control agencies and agreements, including the federal Clean Water Act of 1972.

A few yards ahead, a great blue heron launches itself into flight. “You think that’s the same one we’re seeing over and over?” I ask. David Jurca, associate director of the Cleveland Urban Design Collaborative and organizer of the trip, nods. “It’s probably mad we keep scaring it off.”

There are seven of us on the Cuyahoga on a Friday in July. It’s the first day of the first-ever Crooked River Commute, a two-day voyage from Kent to Cleveland sponsored by the Cleveland Urban Design Collaborative, a satellite urban design center of Kent State University, located in downtown Cleveland. This small group, including faculty and staff from the College of Architecture and Environmental Design, want to promote the Cuyahoga River as the ecological heart of Northeast Ohio—and, despite its history, a viable place to have outdoor fun. 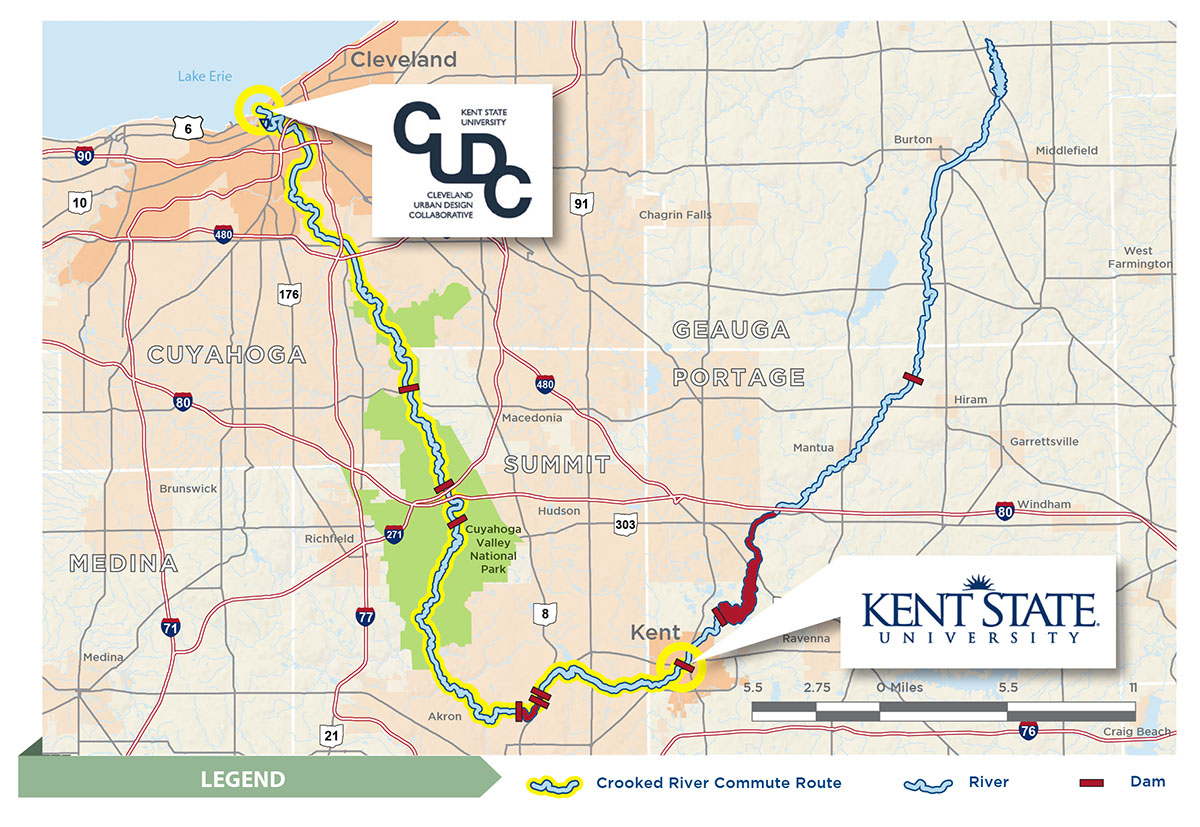 On a map, the Cuyahoga doesn’t make much sense. It runs for 85 miles but drains into Lake Erie only 15 miles further north of its headwaters in Geauga County. This inefficiency is why the Native Americans called the river Cuyahoga—thought to mean “crooked” in the Iroquoian group of languages. It’s also the reason they could use the river to reach both Lake Erie and the Ohio River, via a portage over to the Little Cuyahoga and then the Tuscarawas.

To understand how the river ended up looking like this, you have to go back about 20,000 years, to the time of the glaciers. The Cuyahoga got its crazy U-shape from a glacial meltwater combining with more ancient river valleys. A lot of drama accompanies the two rammed-together sections. At Cuyahoga Falls, there’s a waterfall and Class IV (expert-level) rapids dropping some 280 feet.

The river’s turn also marks a big shift in water quality. Before reaching the metro Akron area, the Cuyahoga teems with fish and smells of fresh green things. After Akron, things get murkier. Akron still releases about 2 billion gallons of combined untreated sewage and stormwater into the river each year, mostly during big storm events when the region’s stormwater and wastewater lines mix.

In any case, the Cuyahoga’s course and characteristics differ from section to section and day to day. First, there are the varying use patterns along the river. The upper Cuyahoga flows through mostly rural Geauga County. Once the river hits Kent, though, industrialization and urbanization intensify. By the time the river outflows into Lake Erie, some 55 miles later, it looks less like a natural watercourse and more like a cog in an awe-inspiring industrial machine.

Then there are the whims of weather and nature. For our trip, the water is particularly low—flowing at about 280 cubic feet per second (cfs) at our put-in point in downtown Kent. The river can run 1,000 cfs or higher during wet periods.

This means the water quality is likely better than normal, as storms lead to sewer overflows. But it also means our kayak bottoms often skim the riverbed, slowing our progress. In other places, water flowing along ordinarily gentle bends in the river moves faster, more unpredictably, more dangerously.

A hush falls over our little party of kayakers as we paddle through a twisty part of the river somewhere north of Brecksville. It’s the second morning of our trip after an overnight stay at a primitive campsite in Cuyahoga Valley National Park. We’d portaged around Brecksville Dam, a low-level dam that’s one of the main obstacles to an unobstructed paddle down the river.

Chris Maurer, an architect and adjunct instructor in the College of Architecture and Environmental Design, has slowed his pace. He’s the most experienced kayaker among us and our unofficial leader and scout. “Hold up,” he calls.

We all know what that means: Trickiness ahead. We slow down, hearing the telltale riffling sound of swift-moving water somewhere in the near distance.

Chris dips his paddle to the right and rudders into the bend. As we get closer, we see a fallen sycamore tree angled across one corner of the bend so that the current rushes straight toward it. Chris enters the rapid, maneuvering his bow away from the tree’s trunk, but the current’s too strong. The water slams his kayak straight into the tree, pinning it against the trunk and dumping Chris into the churning water.

We tense. “Chris!” someone calls.

Finally, Chris’s head reappears, a few yards upriver from his still-pinned kayak. The rest of us step into the river, only a few feet deep here, and drag our boats onto a rocky shoal to portage around the rapid. Then we return to Chris, who fights the current to get back to his boat, still plastered against the tree. We try forming a human chain, holding hand to hand, to pull the boat free. It doesn’t work: The current feels like it has the force of a dozen fire hoses.

Chris hoists himself to stand on top of the boat. He clings to some tree branches and pushes down with his feet, trying to force the kayak into the water below. There’s a jolt, and the kayak disappears for a moment, then bobs up—it’s free. He lets go of the branches and leaps into the river to retrieve his boat.

A minute later, we’re paddling north again. The mood is celebratory: We’ve escaped the situation with ourselves and boats intact, all of us thanking Chris for taking the fall. The Cuyahoga’s worst dangers are no longer its toxicity, but the sheer force and treachery of moving water.

The water quality of the river has improved markedly since that 1969 fire. Even in heavily industrialized portions of the river through Akron and Cleveland, fish and insect species have returned. Long gone are the oil slicks, floating debris and unidentifiable sludge that fed so many blazes in the first half of the 20th century. Partly because of community support for these improvements, the Cuyahoga was one of 14 rivers that President Clinton designated as an American Heritage River in 1998.

The almost six-mile federal shipping channel through Cleveland remains a biological dead zone, unable to support much life because of its physical form. To allow huge freighters to pass upriver from Lake Erie to such operations as the ArcelorMittal Cleveland steel plant, the channel is dredged to a depth of 27 feet, its banks held in place by steel or concrete bulkheads. These rigid barriers eliminate the kinds of habitats that help newborn fish migrate to Lake Erie.

Community leaders are exploring more natural treatments to replace the aging bulkheads, many of which were installed over 50 years ago. “Green bulkheads”—sustainable shoreline management techniques that maintain the river’s shoreline for navigation while also welcoming fish—seem promising.

Entering the shipping channel near Harvard Road, we are awed by the soaring warehouses and century-old foundries of the ArcelorMittal Cleveland steel plant. Up to this point, a few low bridges and houses had been the only visible signs of civilization on the banks above. Now, we’re in a land of industrial giants—smokestacks, freighters, bridges. 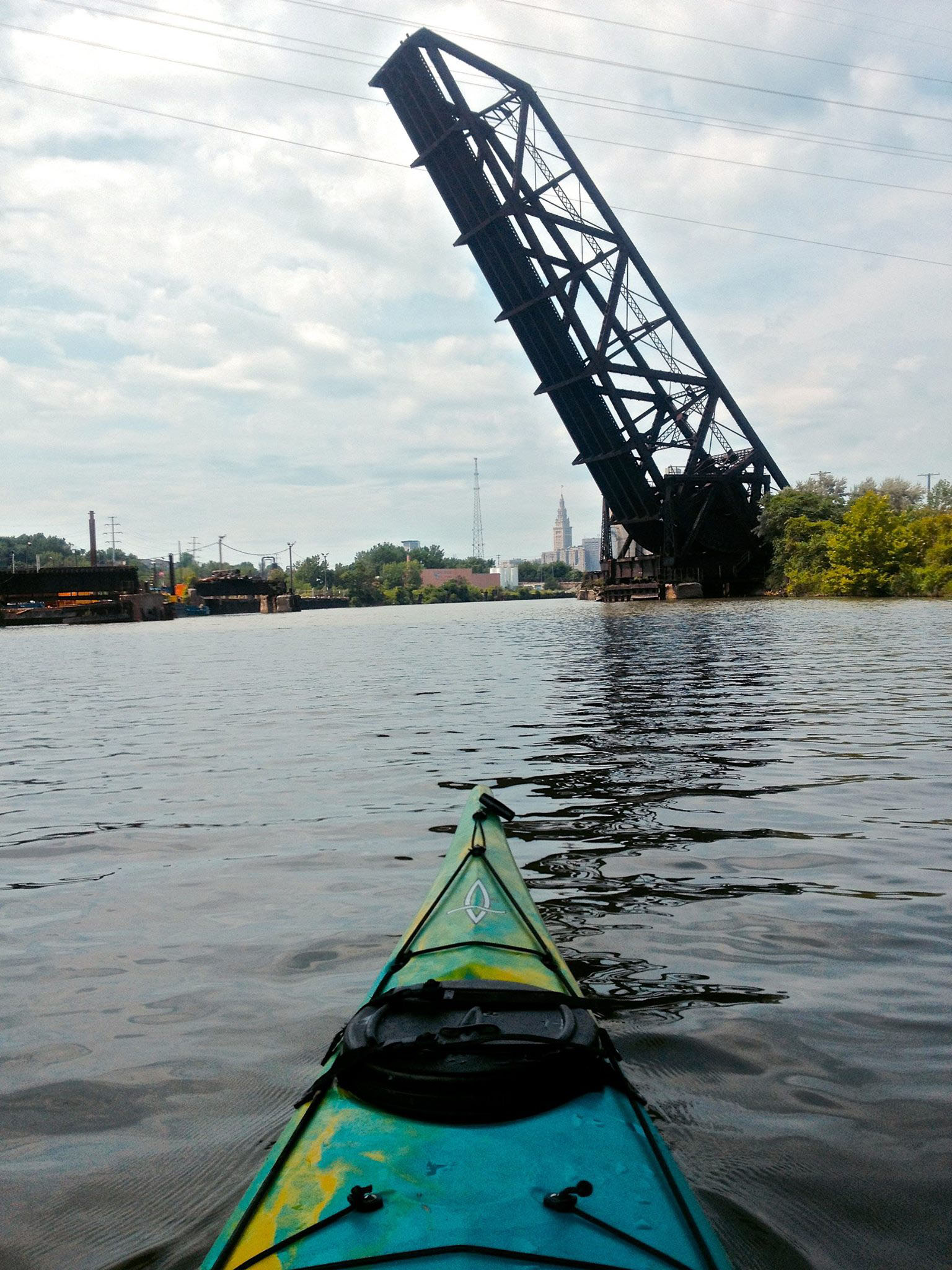 The trees are gone, but the banks above the bulkheads remain rife with plant species, some a welcome sight and some not. Fellow kayaker Charles Frederick, interim director of Kent State University’s new graduate landscape architecture program based at the Cleveland Urban Design Collaborative, points out an invasive loosestrife, but also a native hibiscus dripping an opulent burgundy blossom.

A freighter, the Buffalo, looms alongside us, a horizontal skyscraper. It’s parked at an unloading dock, its motors rumbling. Above, a giant metal claw rattles forward along an overhead track from one of the steel plant’s buildings.

These sights remind us of the ingenuity that made Cleveland boom, and the carelessness that almost caused it to implode. They both inspire and serve as a warning.

We paddle toward the river’s artificial mouth, dug a century ago to create a more direct route for ships to Lake Erie, and we power across to the small beach at Wendy Park, our final stopping point after two days and 55 miles. I can smell hot dogs and french fries from the food trucks at the weekend’s Burning River Festival, which celebrates the region’s environmental progress. Still, there’s something primal about disembarking on the sand, dragging our boats behind us.

Stepping out of the river, I feel changed in ways I can’t describe without sounding a little dumb.

Everyone grins, seeming to know exactly what I mean.

The following week, I feel re-energized. Part of it, I’m sure, was the intensity of the physical experience, the sense of accomplishment. But I also feel a new connection with where I live, with what Northeast Ohio was and is and could be. I’m reminded of the research that shows how exposure to nature calms us, makes us friendlier and more open. And I realize that’s the potential for all of us who live along the Cuyahoga.

Instead of altering nature, as we’ve done for centuries, we now have a chance to be altered by it.

Adapted from a post that first appeared on the Cleveland Urban Design Collaborative blog for August 4, 2014. Justin Glanville is a writer based in Cleveland (www.justinglanville.com) and the author of New to Cleveland: A Guide to (re)Discovering the City.

Learn about the 2015 commute and ways you can support it at www.crookedrivercommute.org. For more information visit www.cudc.kent.edu and www.kent.edu/caed.