Irish is the official language of Ireland, but its use is in rapid decline, and UNESCO lists it as an endangered language. With a student fellowship from the Pulitzer Center on Crisis Reporting, Kent State senior Anna Hoffman traveled to Ireland this summer to research and report on the community of Irish speakers who are scrambling to revive their cultural treasure.

Stories and Photos by Anna Hoffman '15 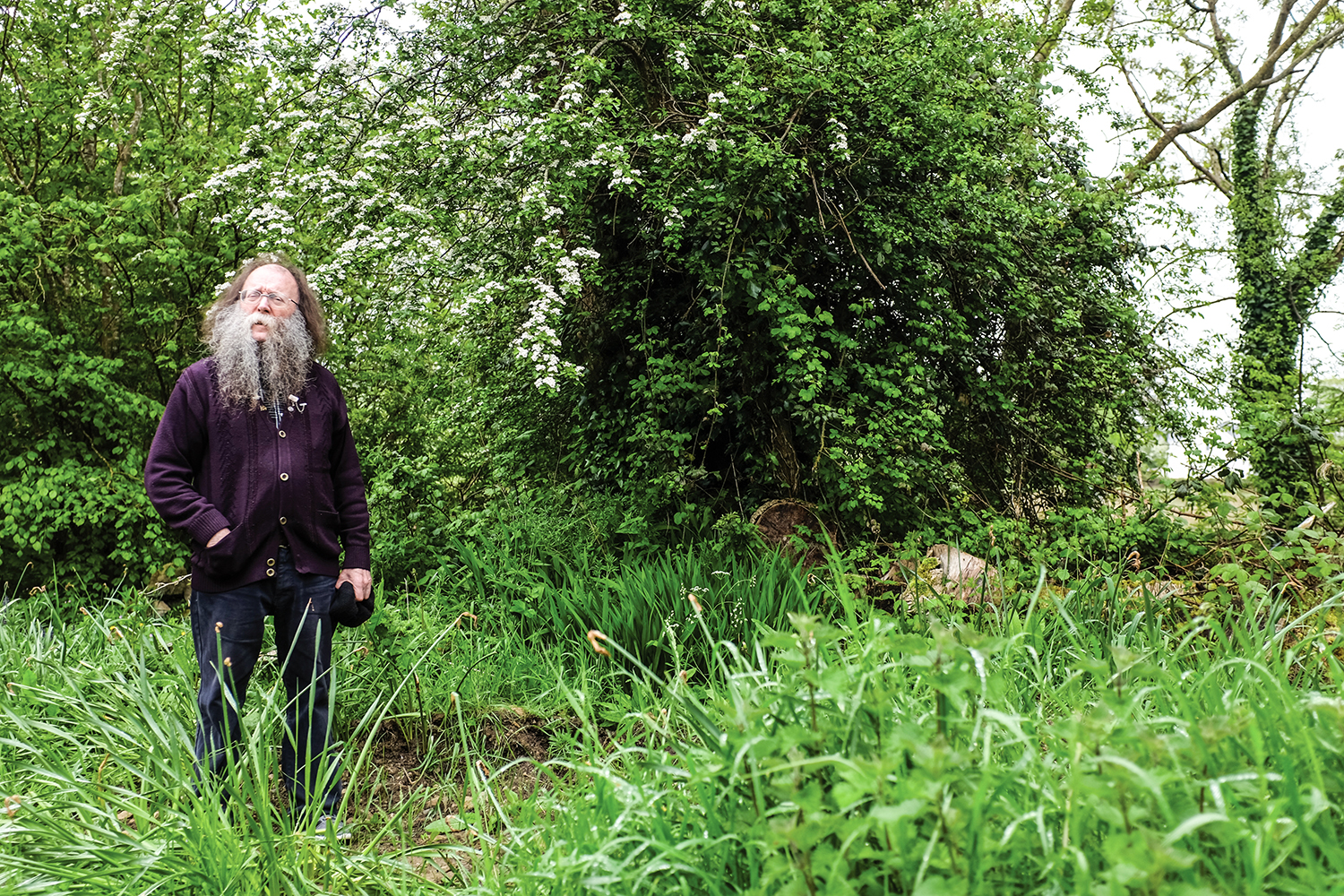 Irish language education is compulsory in Ireland, but not everyone who attends school leaves with the ability to speak it.

“I think the education system was successful in impressing on people the idea that they should be fluent in Irish, but not successful in actually making them fluent, so people just come out with this guilt,” says Aoife Crawford, the acting Irish language officer at Trinity College in Dublin.

Members of the Irish language community do not say they “speak” Irish. Instead, they say they “have” Irish, a phrase indicative of the admiration and desire to hold onto a key piece of Irish cultural identity.

While many in the Irish community point to the new generation of Irish speakers as the hope for the future of the language, there is an entire portion of the Irish population who had such negative experiences with the language when they were in school that they may go their entire lives without ever having Irish.

“Something is direly wrong when after 14 years at school, most people come out without being able to speak Irish,” says Eddie Lenihan, an Irish storyteller based in County Clare. Lenihan says members of his generation recall having Irish literally beaten into them in school. It was not taught as a spoken language, but instead was taught through poetry or literature, with a focus on grammatical constructions.

Robert Campbell, a retired Dublin native, says that at the time he was in school learning Irish, nobody spoke it outside the classroom. “It wasn’t fashionable to speak Irish,” says Campbell. “You were sort of looked down on, so people tried to hide the language.”

These negative feelings toward Irish persist today with some members of previous generations. This causes some to reject it and others to make later attempts at embracing it.

“Where you have lack of resentment, you have hope.ˮ—Eddie Lenihan, Irish storyteller

After Campell left school he moved to America and worked at a theater in Berkeley, California. While working on a play by Sean O’Casey, a famous Irish playwright, the director asked Campbell to perform a monologue in his own language, meaning Irish. “It was the most shameful moment imaginable because I didn’t have my own language,” says Campbell. “I didn’t have it.”

He reached out to a professor at Berkeley and began to learn the speech the director gave him in Irish. Campbell performed the speech, in Irish, on stage in that play, and says he swore to himself then that before he died he would be able to speak Irish.

Today, Campbell is part of an Irish conversation circle in Dublin that meets every Wednesday and he currently writes stories in Irish.

“Where you have a lack of resentment, you have hope,” says Lenihan. “Because the schools created a lot of resentment against Irish.”

The Irish language is becoming a bit more popular among kids growing up with the language today. Watching SpongeBob in Irish or listening to pop hits translated to Irish is not unusual—a stark comparison to the generation that grew up with it as a dead language in classrooms years ago.

Lenihan says, “It will never come back as the first language of the state. [But] we can become proud of it, rather than resentful of it, and say no, we’re not going to let it go—because if we do, we’re letting go of part of what we had.

“If you can get that across to people, then it will survive, and be sure of surviving. Because the day we let Irish go, then we’re in trouble.” 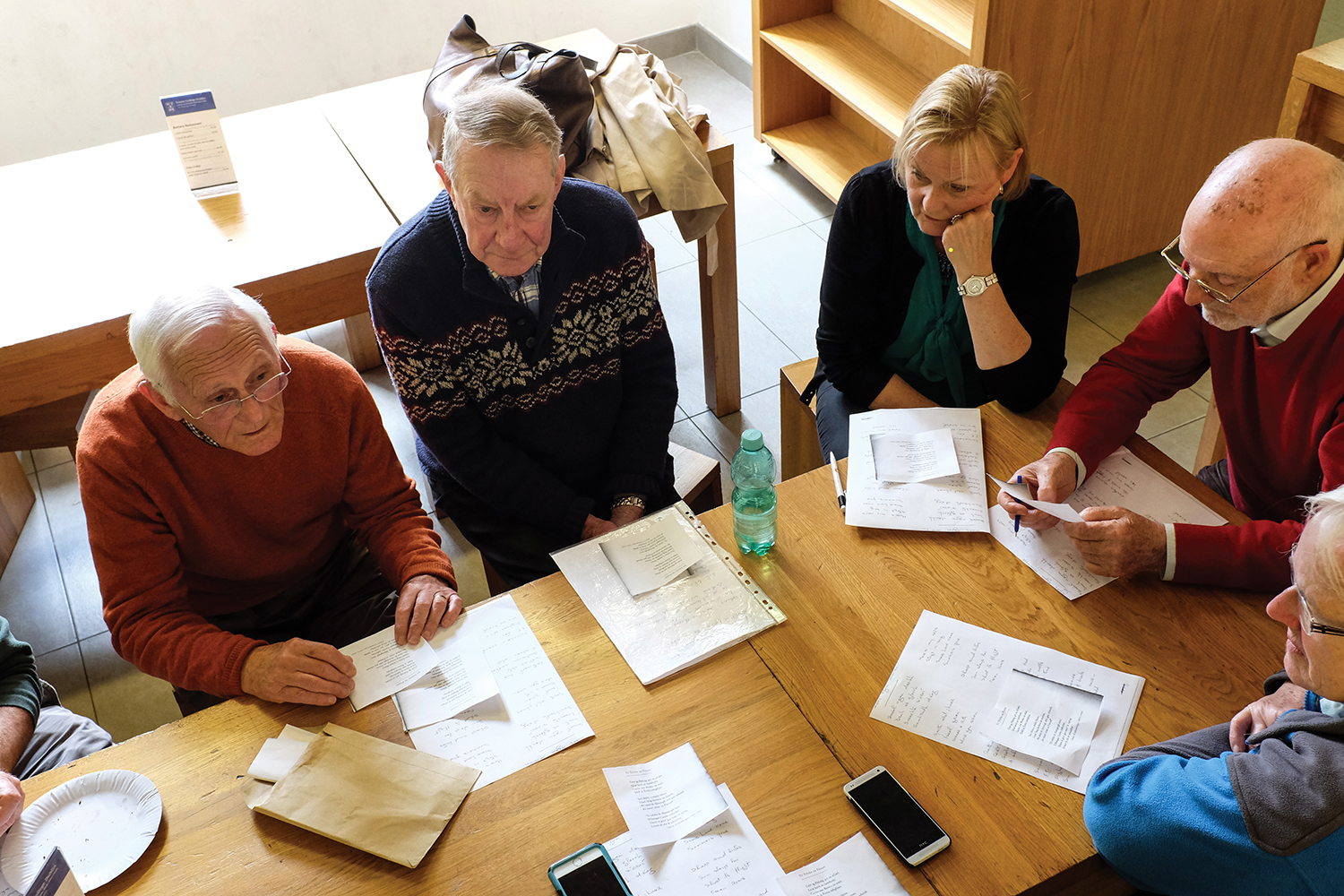 “They just [taught] the Irish language in writing in school, and we learned very little about speaking the language. And it wasn’t fashionable to speak Irish. You wouldn’t get a job‚ either‚ if you couldn’t speak English. So historically it was difficult. When I left school‚ that was the end of the language, even though I loved it. But the basic undercurrent of shame hasn’t disappeared totally.”
— Robert Campbell, retired Dublin native, member of an Irish conversation circle, Trinity College 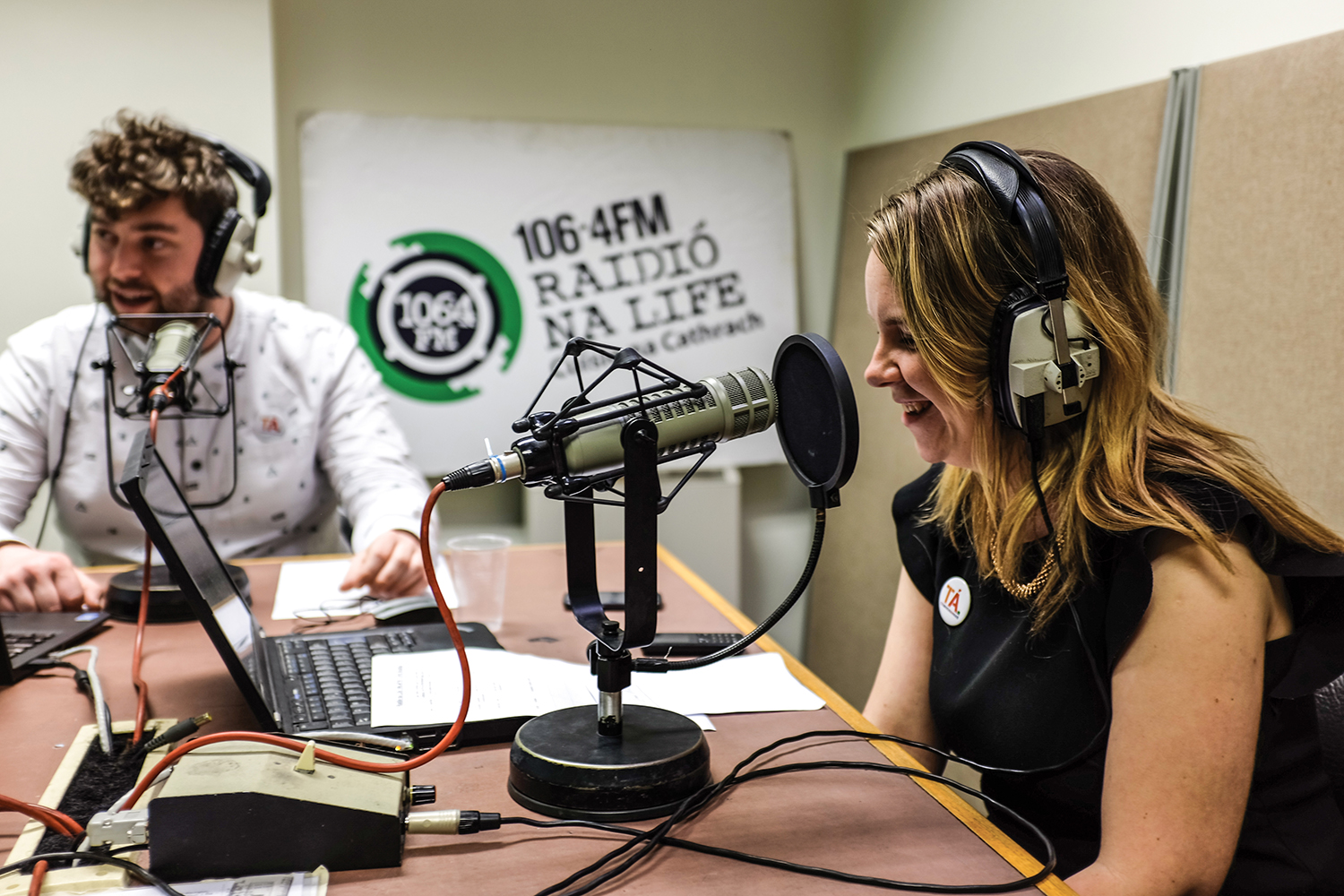 “I started school in Cork, and when I left the classroom I kept speaking Irish. My mam would explain to me that people in the shops didn't speak Irish. We moved to Dublin when I was around eight, and I continued to go to Gaelscoil [Irish medium school]. In secondary school [high school]‚ I went to an English-speaking school. I had no opportunity to speak Irish anywhere‚ other than in the Irish class. If I hadn’t found out about Raidió na Life, I probably wouldn’t be able to speak Irish anymore.”
— Cian Mác Cartháigh, station manager, Raidió Na Life, a community-based Irish language station in Dublin 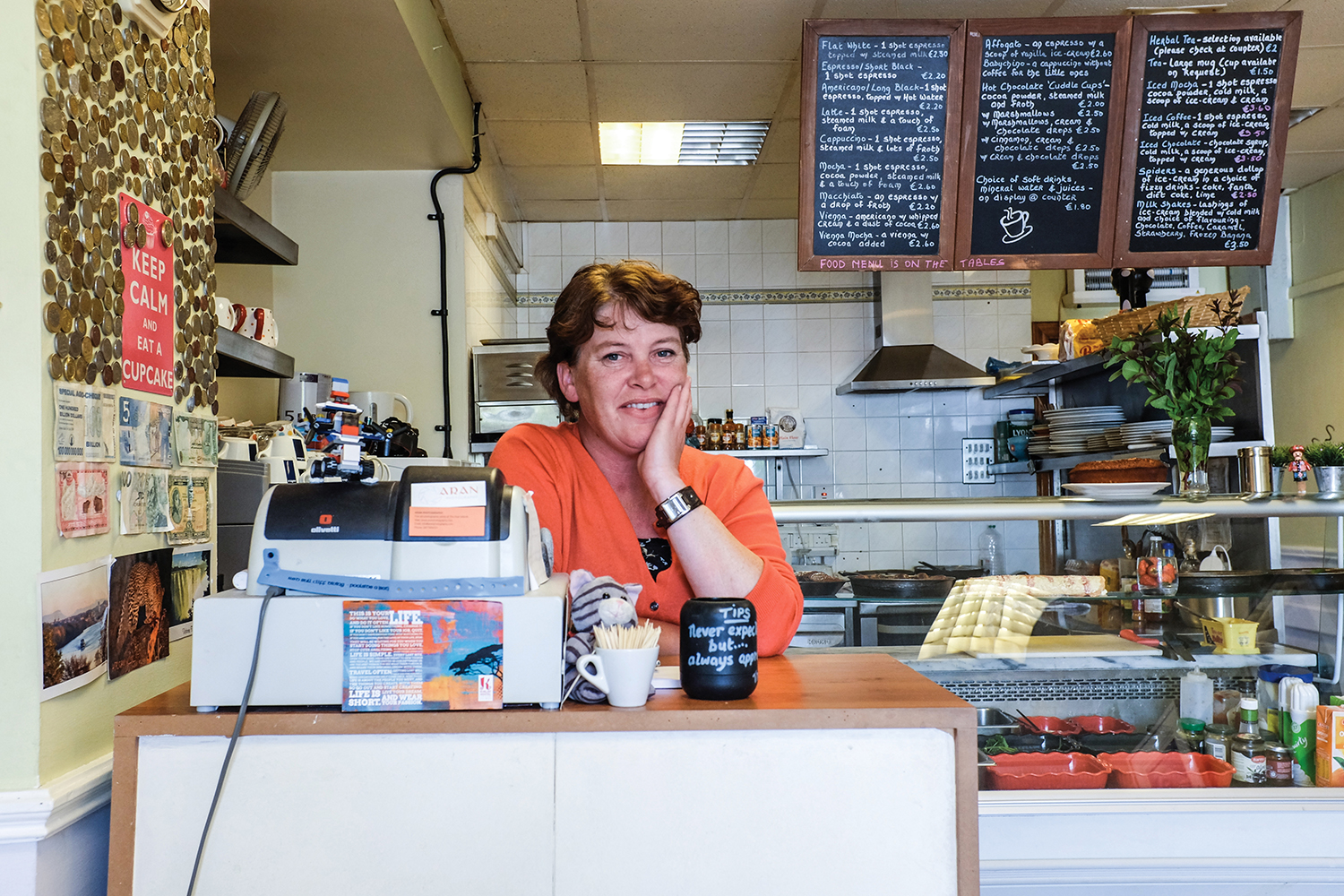 “This last government seemed to want to get rid of us Irish speakers. Everybody from the island has Irish and even people who move here from other countries attempt to learn a certain amount of Irish. Some do a good job of it, some don’t. But at least they try. What I have noticed in the past few years, actually, is a lot more Irish people come to the island trying out their bit of Irish that they learned at school and wanting to learn Irish. More so than years ago. So maybe we are getting more proud of our heritage and our language, hopefully.”
— Angela Connolly, shopkeeper, Inis Mor 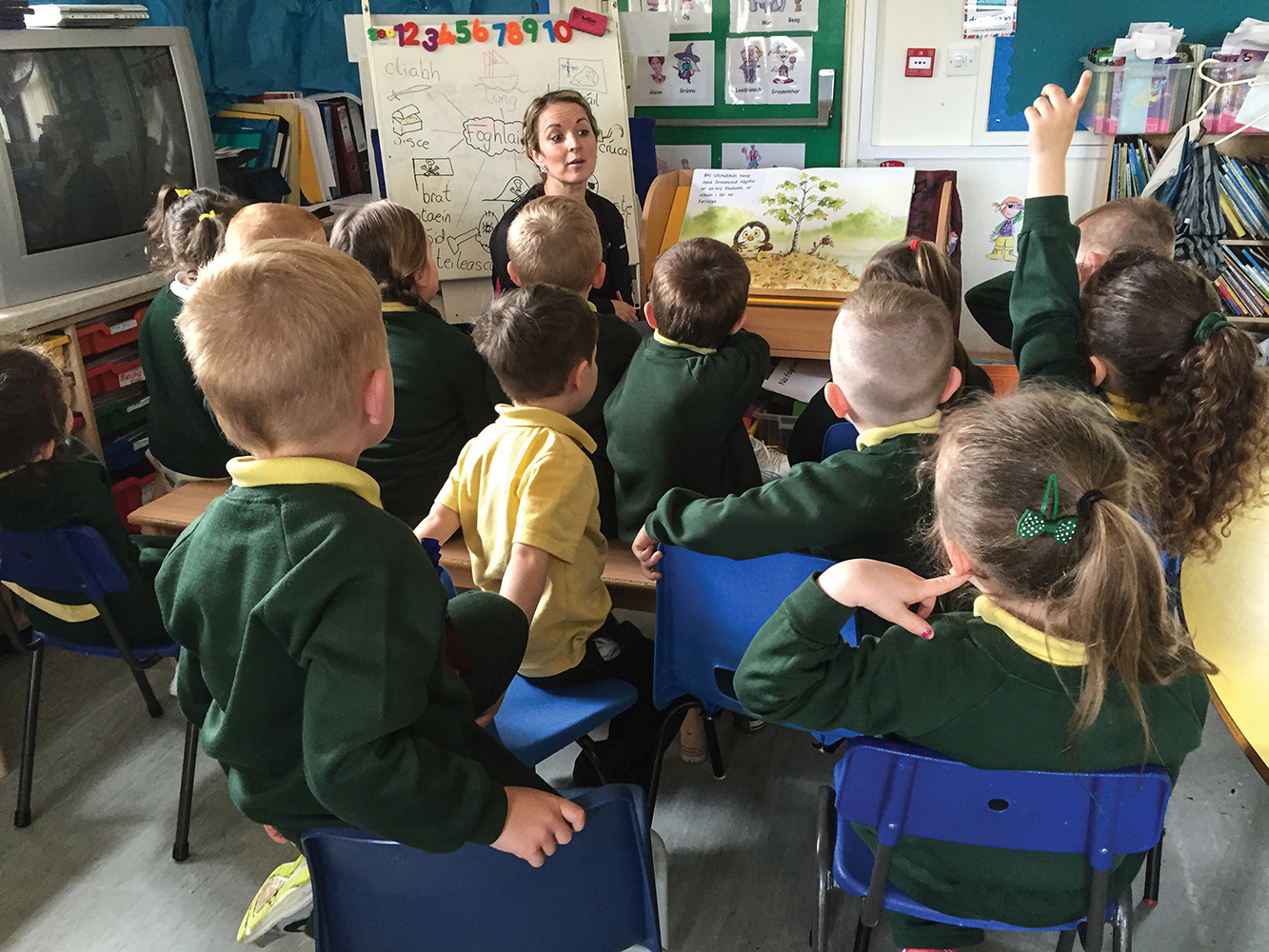 Students at Gaelscoil na Móna‚ an Irish medium school in Belfast. Everything is taught through Irish‚ so students become fluent in speaking the language before they move on. Although not compulsory in Northern Ireland, Irish language education is growing and considered part of the culture. Many people point to the new generation of Irish speakers as the hope for the language’s survival.

Only an estimated 1.8 percent of citizens of the Republic of Ireland speak Irish daily, and only 40.5 percent of the population say they have the ability to speak the language. “There is no situation globally that is comparable to the cultural situation in Ireland,” says Cuan Ó Seireadáin, communications officer at Conradh na Gaelige [The Gaelic League], a nonprofit organization whose primary mission is to reinstate Irish as Ireland’s primary language. “An Ireland without the Irish language wouldn’t be the same place.”

In Ireland’s constitution [the second one enacted since independence in 1922] Irish is given the status of the first and official language of the nation. Nearly 100 years later, English is clearly still the dominant language.

The Irish government has made numerous plans to encourage the use of Irish. In 2003, Ireland passed the Official Languages Act, which promotes the use of Irish for official matters of the state. But often there are too few resources, and Irish speakers complain about noncompliant government organizations. Ó Seireadáin says part of the issue is the government’s “béal grá,” which literally translates to “mouth love,” meaning someone who talks positively but has no actions to back up their words.

“The young people of Ireland are the ones who’ll lose out if the situation continues as it is.ˮ—Lisa Nic An Bhreithimh, radio host, Raidió na Life

“Sometimes policy is formed without full knowledge of the relevant facts,” he says. “Pressure on the Gaeltacht areas [mostly in western Ireland where Irish is the community language] is extremely large and there is a need for the government to take action there to ensure that the most precious cultural thing we have in Ireland, and the place where it has continued in use unbroken for over a thousand years, is not lost.”