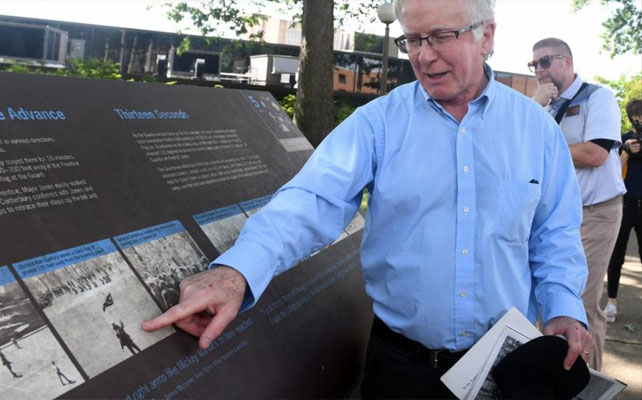 A half century is a long time—whether recalling a life span of 50 years, or denoting the same course of decades, say from 1970 to 2020. Since the shootings at Kent State, eight presidents have shaped the 111-year-old university. For one person to influence nearly half of the university’s institutional life would be unusual, if not altogether unique.

Yet one Kent State graduate, Alan Canfora, may rival any for influence on the university over the past 50 years. Thrust into national prominence on May 4, 1970 by Pulitzer Prize–winning photographer John Filo, BS ’72, Alan was photographed waving a black flag at armed National Guardsmen, and he came to define the struggle against the Southeast Asia War. Neither the photo nor Alan’s role went unnoticed.

Eager to exculpate the Ohio National Guard members who killed four students and wounded Alan and eight others, Portage County prosecutors indicted him, his sister, Chic, and 23 others for their roles in the May 1970 protests.

The Canforas—brother and sister—resisted the indictments and those against their fellow defendants, winning dismissal of the charges. That success marked but one phase of Alan’s remarkable life of activism.

His opposition to the war didn’t end, and his efforts to ensure that the killings would be remembered were just beginning. Partnering with the Indochina Peace Campaign, he helped organize an antiwar rally that drew 7,000 people to the university Commons in May 1974 to remember the lives of those lost.

Knowing that it took organization to maintain the commemorations, Alan and other students formed the May 4th Task Force in 1976. For the next 43 years, until the university agreed to resume the responsibility for the commemorations in 2020, the task force, with Alan’s steady guidance, ensured that the Commons was witness to a memorial every May.

And, when the university announced plans for a gymnasium to be built on the site where guardsmen maneuvered and students were shot, he initiated a six-month struggle to safeguard the integrity of the campus landscape. For his involvement, he sustained further arrests, which ensnared his five family members. The construction of the gym followed legal setbacks—the dismissal of a criminal case against the National Guard and its exoneration in a suit that 13 plaintiff families brought to trial in 1975. 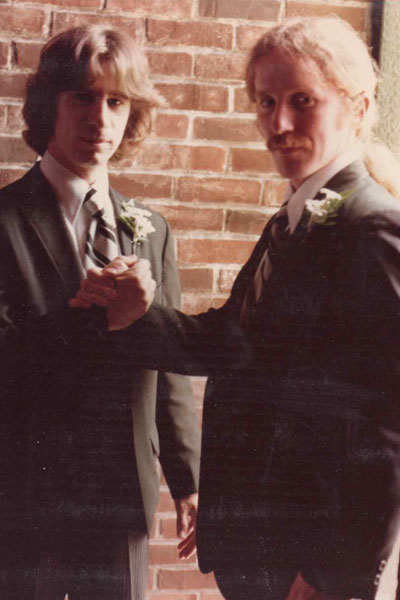 Alan never took losing well. He had a fiercely competitive nature. Fast friends and roommates in Johnson Hall in 1968, we hadn’t known each other long before I learned of his 400-foot walk-off homerun a few years earlier in a state baseball tournament. Whatever the arena, he remained steadfast. And whether living near or far apart, we drew strength from one another.

He kept plaintiff families informed about developments on campus that affected their legal appeal and, along with the task force, began to agitate for the construction of a campus memorial for those slain on May 4. The appeal produced a new trial, which won an out-of-court settlement. The five-year campaign he initiated for a tribute to the students occasioned the dedication of the May 4 Memorial on the Kent Campus in 1990.

Other forms of remembrance followed. By the mid-1990s, university presidents accepted that teaching about the fatal confrontation should be part of Kent State’s educational mission. Locations near the Prentice Hall parking lot where the four students had died were closed to traffic, while an interpretive marker offered context. Still later came the May 4 Visitors Center, outdoor historical signage and, most recently, the placement of markers where the nine students were wounded. All of these projects benefited from Alan’s vast knowledge of the felonious events.

Laura Davis, BA ’76, the co-founder of the May 4 Visitor Center, wrote of Alan: “In agonizing courtroom sessions, he witnessed every word spoken, every rock, map point or photo argued. In the years that followed, he continued to study testimony transcripts, every one of the thousands of photos that emerged. . . . He held all of this information, of five decades, in his being and could bring it forth at any and all moments.”

Utilizing his graduate school training in library science, Alan established the Kent May 4 Center, the nation’s largest private collection of materials related to the fatal shootings. Being much in demand, he spoke about the killings throughout the country. At the Kent Campus, he gave tours of the site, which became a National Historic Landmark in 2016, to high school student groups, history clubs, educators and incoming university presidents.

A Summit County Elections commissioner for several decades, Alan became director of the Akron Law Library in 2011. Pugnacious and partisan throughout his life, his success over many years as the chair of Barberton’s Democratic Party produced a steady stream of election victories for the party’s candidates.

In one pivotal election year, I spent weeks working under his direction and saw how nothing escaped his attention. The arrangement suited our different personality types and further cemented a lifelong friendship: Alan the voluble leader, confident in the public glare; me his ceaseless assistant, happier working in his giant shadow.

Professor Richard Perloff, of Cleveland State University, one of many who benefited from his expertise and generosity, summed up Alan’s legacy well: “He found his life mission during the afternoon of May 4, 1970, and lived it for five more decades, in the face of skepticism and anger, refusing to bend, a model of courage who helped so many see what they initially refused to apprehend: that America had perpetrated an injustice on four students one May afternoon and had to come to terms with it.”

Thomas Grace, PhD, one of the nine students wounded on May 4, 1970, is an assistant professor of history at the State University of New York’s Erie Community College in Buffalo, New York. His major fields are 1960s political history and the Civil War. His book, Kent State: Death and Dissent in the Long Sixties, was published by the University of Massachusetts Press in 2016.