Turn of the Page 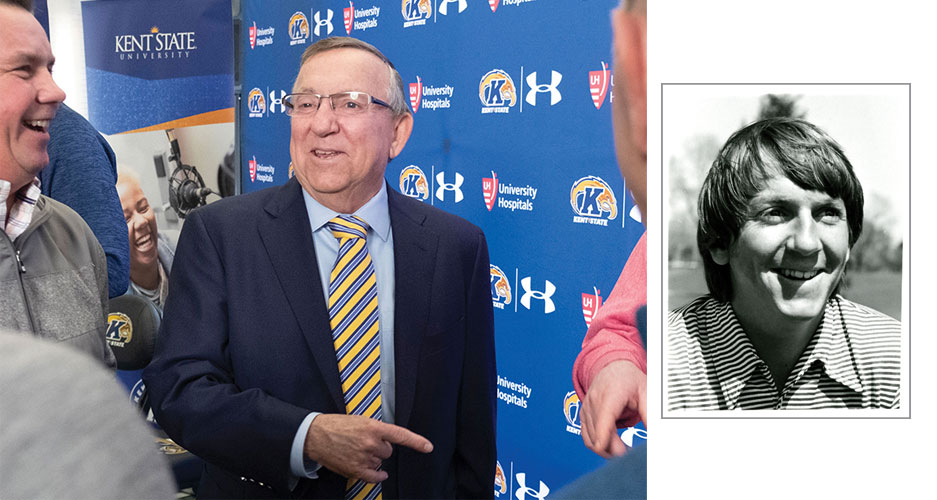 Herb Page as a student-athlete in the early 1970s Top: Herb Page after announcing his retirement in March 2019
Headshot Photo by Special Collections and Archives

Kent State University’s storied golf program will begin a new chapter in July. The 2018-19 golf season will be the final one for Herb Page, BS ’74, MA ’76, Kent, Ohio, as he retires as director of golf and head men’s golf coach and hands the baton to Jon Mills, BS ’02, his former player and associate head coach.

A native of Markham, Ontario, Coach Page came to Kent as a three-sport student-athlete (golf, football, ice hockey) in the fall of 1970 and has been a pillar in Kent State University’s athletic success ever since. His first Mid-American Conference Championship ring came as the kicker on the famed 1972 Golden Flashes football team.

After leading the men’s golf team to 22 MAC crowns and being a part of 20 conference titles in 20 seasons from the women’s team, he is the proud owner of 43 MAC Championship rings.

“In addition to his outstanding success as head coach,
Herb was ahead of his time in so many areas,” Director of Athletics Joel Nielsen says. “He was a strong proponent of adding a women’s golf program [in 1998] and knew what needed to be done to sustain success.

“He also had the foresight to create a top-notch training facility that has played a huge role in the recruitment and development of our golfers. Plus, he started the Rango Invitational 33 years ago as a sport-specific fundraiser, which has raised millions of dollars for the men’s and women’s programs.”

Taking over in fall 1977, Coach Page’s 41 seasons are the most by a head coach in any sport throughout Kent State’s history. Numerous Golden Flashes went on to have successful professional golf careers, and a number of other Kent State alumni have made successful careers around the game of golf.

Coach Page earned both his bachelor’s and master’s degrees at Kent State. In August 2012, the experience at his alma mater came full circle as he delivered KSU’s commencement address.

“Kent State means so much to me,” he says. “I am forever grateful to the university and all of the administrators, staff and student-athletes I have had the privilege of coaching, who made our golf program so successful. This is my alma mater and the Kent community has been my home ever since. But most of all, I am indebted to the wonderful student-athletes I have worked with. It is humbling to reflect on all that they have achieved over the past 41 years and the amazing memories that we have made together.”

Excerpted from a story that first appeared on www.kentstatesports.com.