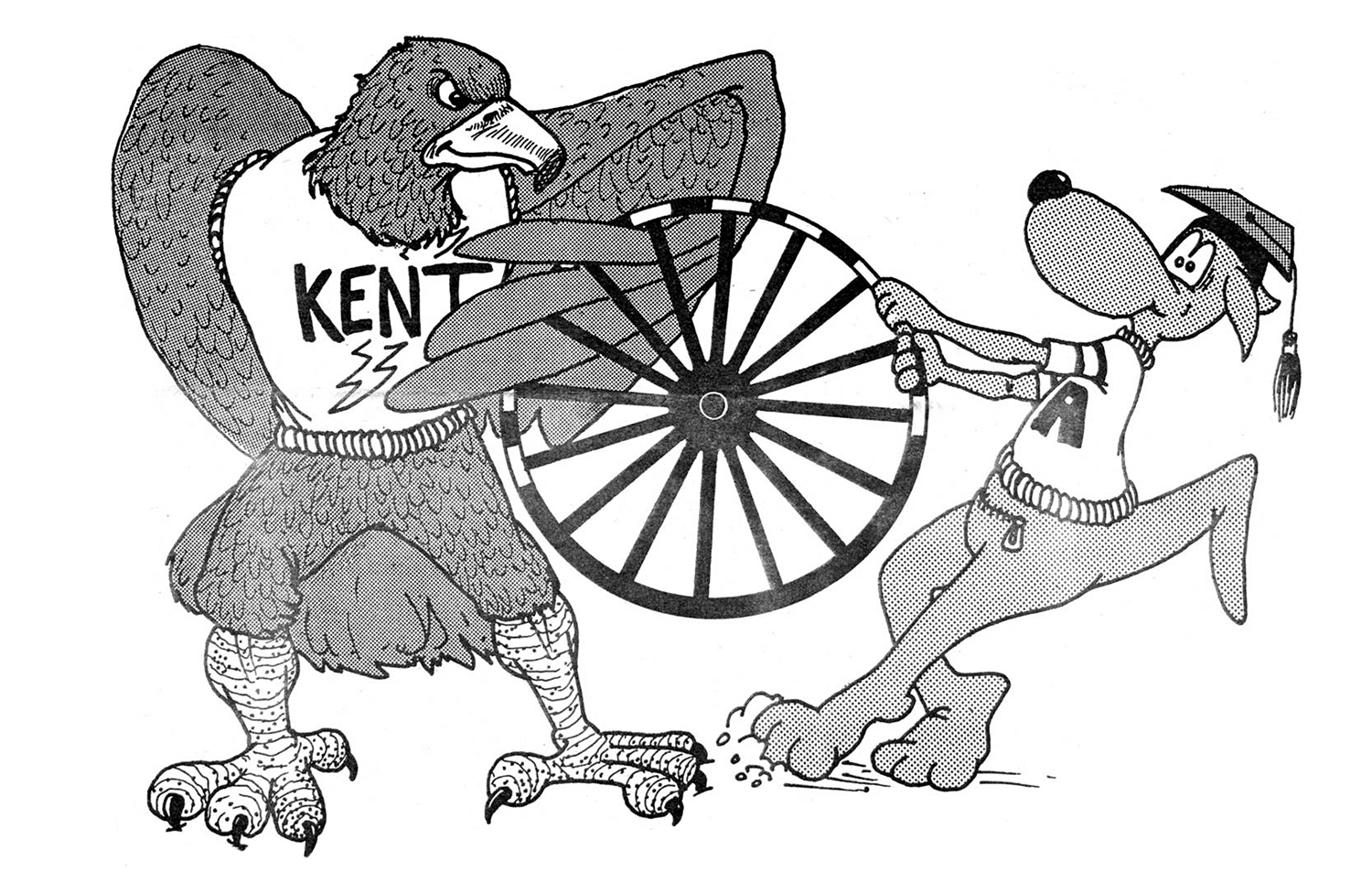 This illustration ran with an announcement for the 1986 Battle for the Wagon Wheel in the September 9, 1986 Daily Kent Stater. (Akron won 17-7.)

The Battle for the Wagon Wheel—the rivalry between Kent State University and The University of Akron—first became a contest in 1946 when Raymond Manchester, Kent State’s dean of men, offered an old wagon wheel as a trophy in that year’s football game between the Golden Flashes and the Zips.

The dean claimed the wheel had come from the buggy of John Buchtel, an Akron industrialist who was the main benefactor and original namesake of what is now the University of Akron. According to the legend that Manchester promulgated (as reported in The Kent Stater, November 15, 1946), Buchtel lost the wheel in the spring of 1870, while in search of a site for his proposed college. His buggy became bogged down near a spring along the Western Reserve trail, which ran through what is now the Kent Campus. As the horses broke free from the buggy, a wheel remained mired in the swamp—and Buchtel dropped Kent from consideration.

The wheel was said to have been unearthed in 1902 by workers piping water from the spring to the northern outskirts of Kent, but its origin remained unknown until the town’s patriarchs recalled the “incident of 1870.” Somehow the dean acquired the wheel, which he viewed as a symbol of good fortune: “Had it not been for the loss of this wheel, Kent might never have received the fine state university now located here.”

When University of Akron officials got wind of the wheel, they challenged Kent State to regain what they felt was rightfully theirs. Manchester accepted the challenge: “That buggy wheel is a relic that belongs to KSU, but I’m willing to put it up as a trophy—there’s no danger of losing it.” Kent State won the first Wagon Wheel, which had been painted blue and gold (both schools’ colors), beating Akron 13-6. The Flashes won the wheel for the next eight years, and after Kent State’s 58-18 win in 1954, the series was discontinued.

The rivalry was revived in 1972 (13-13 tie), but because of different conferences and NCAA levels, the two teams played each other only occasionally for years. They both were members of the Mid-American Conference in 1992, and they’ve played each other ever since. The two schools began a Wagon Wheel Challenge in 2011, which counts all athletic contests in the sports at which they compete head-to-head.

The Wagon Wheel is currently in Akron’s possession, but it is time to bring it home. The two rivals will match up again this year at the Homecoming game on October 1, 2016. Go Flashes!