Window on the Future

Trustees Research Professor John West sees a world of potential for the promising new technology behind his start-up’s initial product—a switchable window that acts like an electronic venetian blind. 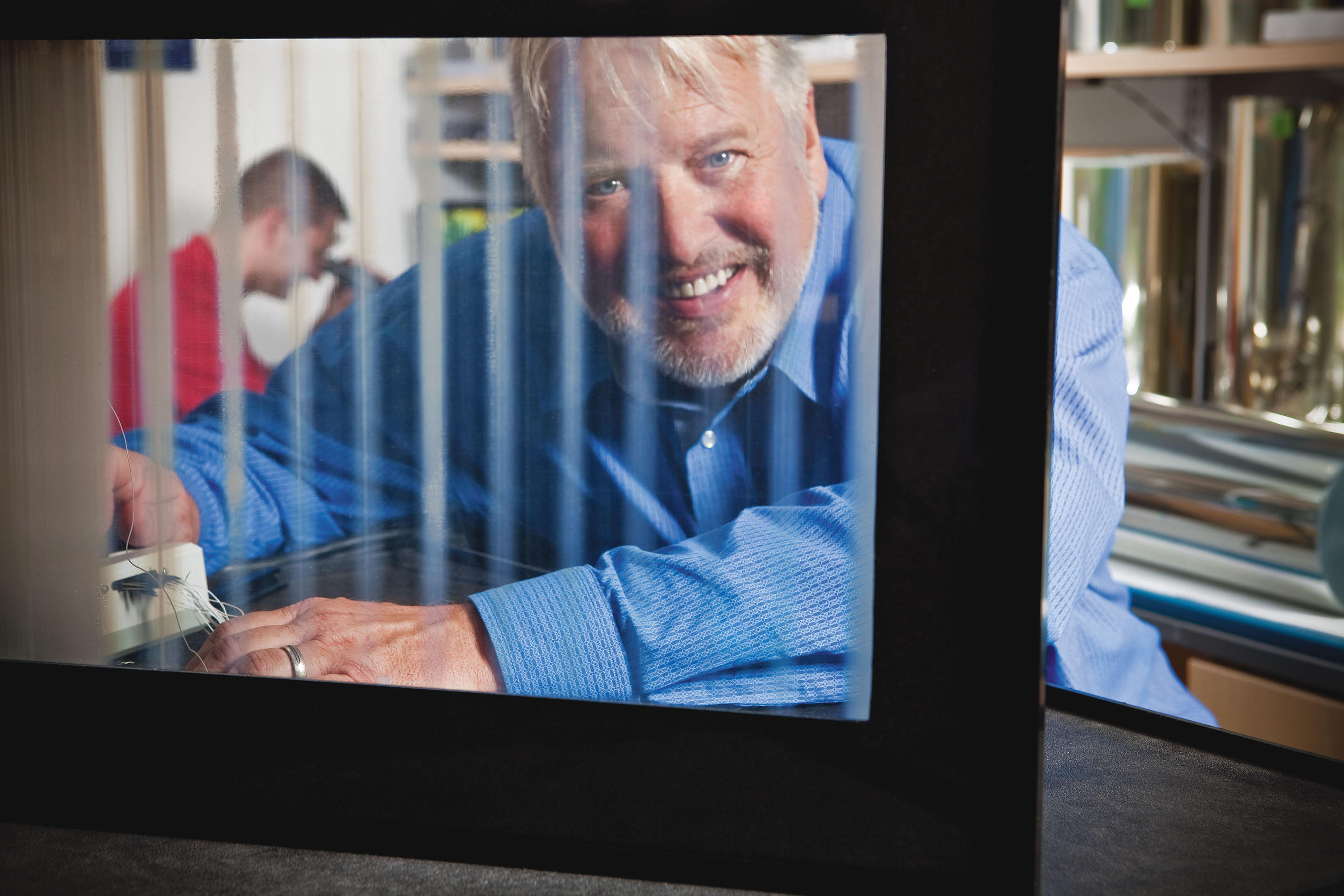 It started with an accidental discovery. In 2012, John West was in his lab when a doctoral student working with him at the time brought him a microscopic image that showed uniform cracks in a coated film he had been cutting with a razor.

Fascinated, West—a senior research fellow at Kent State’s Liquid Crystal Institute®—investigated further and realized that if they could control the cracks, the process held potential for useful devices, including a technology he’d worked on since 1984 when he first came to Kent State: switchable windows.

West has played a major role in the growth of the Liquid Crystal Institute, which celebrates its 50th anniversary this year. He came to work on polymer dispersed liquid crystals (PDLCs) in the mid-1980s.

PDLCs are made by mixing liquid crystals* and clear polymer and can be used in windows and simple displays. In the past, West had used PDLC technology to make privacy windows that switched from fully transparent to fully opaque.

“When PDLCs are used in a window, the glass initially appears to be frosted because each liquid crystal points in a different direction, scattering the light,” West explains. “However, when you apply an electrical field to the coating, the liquid crystals line up, and the glass becomes clear.”

Cracks in a rigid PDLC window or display aren’t welcome. Cracks are also a problem with the material West has been working with in recent years—indium tin oxide (ITO), which is both transparent and conducts electricity.

“It’s used in thin layers on the inside of the glass substrates used to make cell phone screens, flat panel displays, anything where you want to have light pass through but still conduct electricity,” says West. “I’ve been researching flexible displays for a long time, particularly looking at flexible plastic films coated with indium tin oxide. But indium tin oxide is brittle, and when the film bends, it cracks.”

What West and his associates found is that they could control the cracking process by bending flexible plastic substrates, creating patterned electric fields that allowed select areas of the windows to be switched without resorting to costly photolithography or similar techniques to transfer electrode patterns onto a substrate. He realized this new innovation had commercial potential—and switchable windows immediately came to mind.

West submitted a grant proposal in 2012 to the Ohio Third Frontier Commission and received start-up funding, some of it matched by Kent State. At the end of the first year, he knew he could make relatively large films using his new technology. The doctoral student who had first observed the uniform cracks in the lab, Da-Wei Lee, Ph.D. (now a postdoctoral researcher at the University of Pittsburgh), built the first prototype of a switchable window incorporating the “cracked” ITO coated on as a thin film to flexible plastic substrates.

“The prototype added functionality to the switchable windows that were developed at Kent State a generation ago,” says West. “Using our substrates, we can make an electronic venetian blind that can change in width, roll up and down. It adds a lot of functionality at a very cheap price.”

West then met with window manufacturers to scope out the size of the market for his innovative new product. In August 2013, he established a company, naming it FITOS (Flexible Indium Tin Oxide Solutions) and in 2014 received $100,000 from the Great Lakes Innovation and Development Enterprise to get it up and running.

West is focused on manufacturing and selling his substrates to window companies; they’ve signed their first contract and are lining up partners. But he is also looking to use the films in touchscreens and flexible displays. FITOS research director Nick Diorio, Ph.D.—who last year was a postdoc at the Liquid Crystal Institute after earning a doctorate in chemical physics at Kent State—is working on prototypes.

“This technology offers the potential to create very large touchscreens that would be cheaper to make and fabricate,” says West. “And eventually we hope to be creating the substrates that will make flexible displays possible.”

So someday when you drop your mobile device, its display won’t crack.

It’s a substance that behaves something like a liquid and something like a solid. Examples can be found in nature—in fact, the soapy slime on the bottom of your soap dish is a liquid crystal, not much different from the material in a laptop screen.

What makes a liquid crystal different from ordinary liquids is the shape of its molecules; they’re long and thin. Even if the molecules’ positions are random, their orientations can be aligned with one another in a regular pattern—and that’s what creates the ordered structure of a liquid crystal.