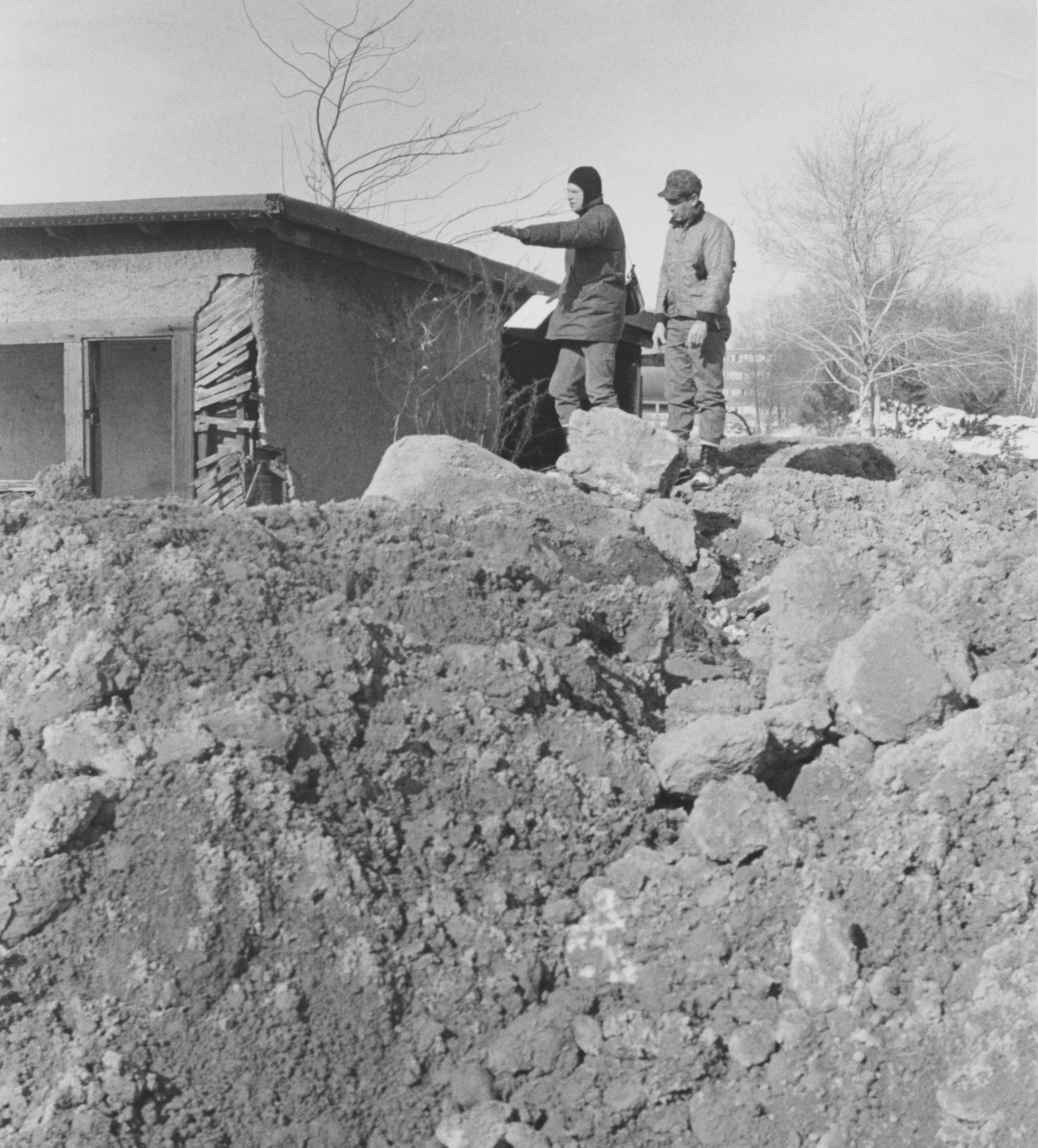 In January 1970, while creating the earthwork Partially Buried Woodshed, artist Robert Smithson indicates where he wants 20 truckloads of dirt piled on top of  an abandoned outbuilding at what was then the east edge of the Kent Campus.

Behind Kent State’s Liquid Crystal Institute, a recently installed plaque marks the spot of a stone foundation, all that remains of an acclaimed—and controversial—work of art.

In January 1970, earthworks artist Robert Smithson came to Kent State to participate in a student-funded arts festival. His plan to create an earth sculpture on campus—a mud pour that would illustrate the law of gravity—fell through because of frigid weather. Smithson proposed another idea: to allow a building to exemplify entropy, the eventual exhaustion and collapse of any given system over time.

He chose an abandoned woodshed on a farm the university had acquired at the east edge of campus, and he and a group of students rented a backhoe to pile 20 truckloads of dirt up to and over part of its wooden roof until the center beam cracked—signaling the beginning of its collapse.

In a one-page handwritten document, the artist donated the work of art—which he named Partially Buried Woodshed and valued at $10,000—to the university, and he requested that nothing be altered or removed and any weathering be considered part of the work.

Kent State Professor Emeritus of Art Brinsley Tyrrell says Smithson told him he wanted the art “to acquire its own history.” Just months later, after the events of May 4, someone painted “May 4 Kent 70” on the shed’s lintel—linking the collapsing structure to that turbulent time.

The second of several large earthworks Smithson completed before he died in a private airplane crash in 1973, the Partially Buried Woodshed was both respected and scorned locally; some called it art, others an eyesore. An arsonist set it on fire in 1975, destroying the left side. As the campus expanded eastward, university administrators screened the shed from view with a grove of trees, but that didn’t deter the many art enthusiasts who came to see it.

Smithson’s artwork gained a wider audience. In 1980, museums around the world exhibited Robert Smithson Sculpture, which included large photographs of the Partially Buried Woodshed. (And his work still is exhibited internationally.)

By accident or intent, the Partially Buried Woodshed was torn down to its foundation in 1984. The School of Art Galleries mounted exhibitions to commemorate its creation in 1990 (20th anniversary) and in 2005 (35th anniversary); the latter included works others had created in response to it.

In his earthworks, Smithson questioned the idea that a work of art is frozen in time at the moment of completion. Today, although the physical remains of the Partially Buried Woodshed have almost vanished on campus, its concept continues to intrigue, inspire—and invite controversy.