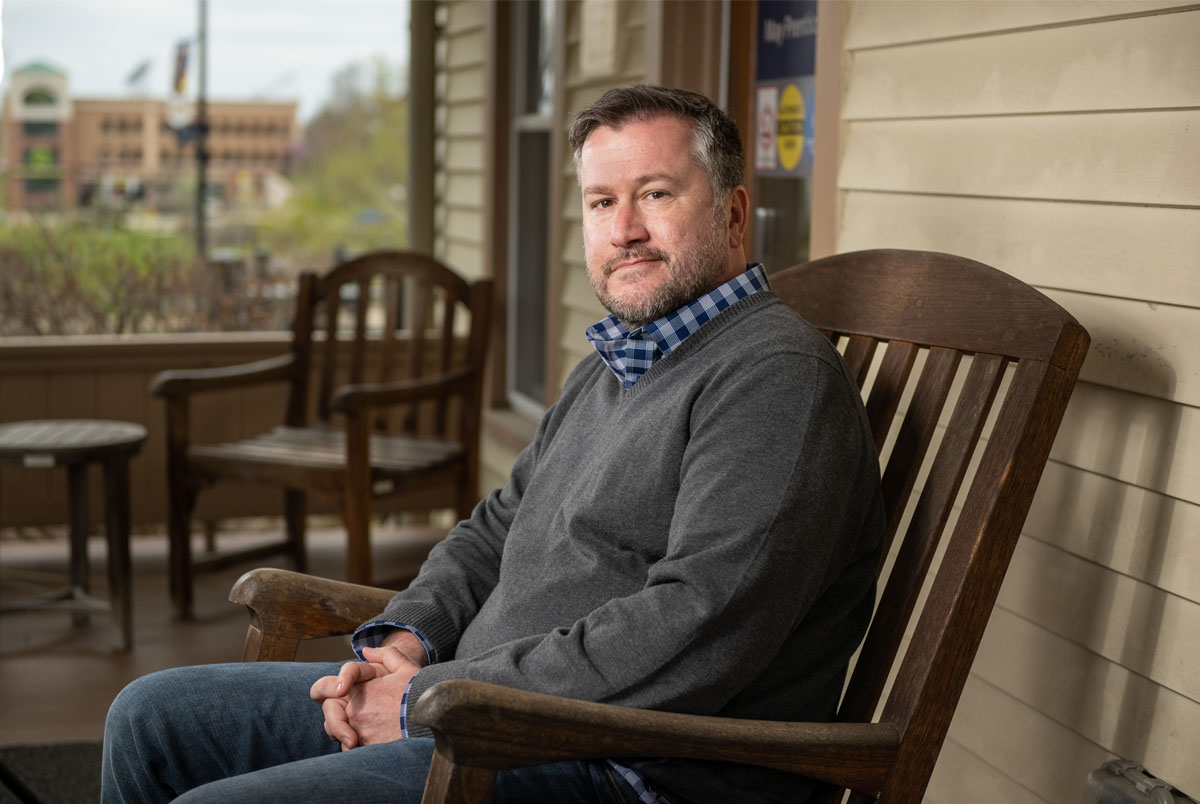 Shining a Light on Unsolved Crimes

With the Porchlight Project, true crime author James Renner, BA ’00, has turned from writing about murders to helping solve them.

The case of Barbara Blatnik had always stuck in James Renner’s mind. A pretty high school senior from a suburb of Cleveland, Blatnik had gone out partying a few days before Christmas in 1987. The next morning, she was found, naked and strangled, in a wooded ditch a half-hour outside Cuyahoga Falls. Police identified her body by an inscription in Blatnik’s class ring, but they never had a suspect. “It was such a weird case,” says Renner. “She went out partying with her friends, and then the next morning she’s found naked and murdered in the country. How could that happen?”

As a true crime writer, Renner has been asking similar questions for almost two decades to get to the bottom of some of Ohio’s most intractable cold cases. In fall 2019, however, Renner decided to try a different tack. Contacting the Cuyahoga Falls Police Department, he told them about a nonprofit he’d recently launched called the Porchlight Project. It uses the new tool of genetic genealogy, matching DNA evidence to massive databases to help identify suspects and victims. The previous year, it had been used in California to catch the notorious Golden State Killer. Now, Renner proposed they use the technique to identify Blatnik’s unknown assailant.

Police agreed to provide a sample, and the nonprofit paid the expense for laboratory analysis and genealogical sleuthing. Several months later, in May 2020, Renner got a call from Barbara’s sister Donna. She told him police had made an arrest.

That moment was the culmination of a lifetime spent investigating unsolved murders. When Renner was 11 years old, growing up in the Cleveland suburb of Rocky River, he saw “missing” posters on telephone poles for Amy Mihaljevic, a girl about his age who had been abducted from nearby Bay Village. “My first thought was if she was in my sixth grade class, she’d be the girl I’d be sending notes to,” he remembers. “I became obsessed with solving the case as this kind of Encyclopedia Brown boy detective.”

He rode his bike to the malls and scoped out crowds, looking for men who might fit the composite sketch created by police. “It was this moment I realized that we live in a dangerous world,” Renner says. “If this could happen to somebody that I could go to school with, it could happen to anybody.”

Police found Mihaljevic’s body in a field a few months later, but her killing remained a mystery that Renner never stopped wanting to solve. At Kent State, he majored in English and began writing for The Kent Stater student newspaper, deciding by graduation that journalism was his calling. He soon got a job as a staff writer at the alternative weekly Cleveland Scene, where his first major story was an investigation into Mihaljevic’s killing.

“It was very surreal,” he says. “Suddenly I had permission to ask questions and meet the detectives involved and Amy’s family.” His investigation grew into a book about the case, Amy: My Search for Her Killer, published in 2006; by that time, he had written about more than a dozen unsolved crimes.

“It’s a battle of wits—are you smarter than the killer or is he going to get away with it?”

“It’s a drive to solve a complicated puzzle that nobody has solved before,” he says of his fascination. “The only person who sees the whole puzzle is the killer who did it. It’s a battle of wits—are you smarter than the killer or is he going to get away with it?”

In all his reporting, however, he’d never succeeded in identifying a murderer. By the time he was investigating the disappearance of Maura Murray in 2011, the work had begun to take its toll. As he describes in his book True Crime Addict: How I Lost Myself in the Mysterious Disappearance of Maura Murray, published in 2017, he found himself threatened by some of the men involved in the case, which in turn put stress on his marriage and family. He eventually entered therapy to deal with the trauma.

Around the same time, however, he first heard about the new tool of genetic genealogy when the Golden State Killer was arrested in 2018. In it, he saw a potential means to overcome his frustrations about solving cold cases. “I realized right away this was going to change everything,” Renner says. Unlike previous forms of DNA testing, in which police could only compare samples with the thousands of convicted criminals in state offender databases, the advent of widespread genetic testing has created commercial databases with millions of records. Even a near match can lead investigators to a family member of the perpetrator, who may then be identified by family tree research. “It works like a genetic fingerprint,” Renner says.

Despite the technology’s potential, testing is prohibitively expensive for most police departments. Renner put out a message on Facebook asking for help; it was answered by Alexa Doutt, a director of advancement at Kent State. The two met at a coffee shop in West Akron—and the idea of the Porchlight Project was born.

“I was always a fan of James’s work, and this was a way for me to make a difference,” says Doutt, who handled the back-end legal work of setting up the nonprofit and began fundraising. The two assembled a board, which includes graphic designer Dan Marks, BA ’99, a friend from Renner’s Kent State days, and Phil Trexler, BS ’90, a 3News investigative producer whom Renner knew from Scene.

Starting with the Blatnik case, the Porchlight Project paid $6,000 to sequence the DNA found under her fingernails, which required a complex procedure to separate Blatnik’s DNA from that of her attacker. A genetic genealogist matched the resulting DNA to a 67-year-old Cleveland man named James Zastawnik; police confirmed the match with a fresh sample.

Renner was ecstatic when he got the call from Blatnik’s sister that Zastawnik had been arrested. “That moment is right up there with my marriage and the birth of my kids,” Renner says. “Rarely does something work out so perfectly.” Although Zastawnik died of cancer before he could stand trial, for Blatnik’s family his identification put an end to more than three decades of uncertainty. “Her family was able to have some closure, which is the most important thing,” Doutt says. Just as importantly, the outcome showed that the Porchlight Project’s model worked.

For its second case, the Porchlight Project took on the identification of 72 human bones found wrapped in newspaper in a barn in New London, Ohio. Renner was particularly excited since it was located near the home of one of the suspects in the Amy Mihaljevic murder. What the project found when it tested them, however, was more bizarre.

A genetic genealogist traced them to a schoolteacher named Hallie Armstrong, who died in 1881. While Armstrong was ostensibly buried more than 150 miles away in Clinton County, research by genealogist Val Bogart revealed that the home was once the residence of a prominent physician; Armstrong may have been a victim of an epidemic of grave robbing to obtain bones for medical research. While in this case the project may not have solved a murder, it did solve a mystery. “We were able to give [Hallie Armstrong] her name back,” Doutt says. “She can be laid to rest as she was meant to be.”

Fresh off this success, the project is currently at work on identifying victims in two other cold cases. In one, a man’s body was found inside a barrel in Cleveland in 1969. He had been shot and dismembered. In another, a young woman’s body was found partially decomposed on the shores of Lake Erie in Sandusky in 1980.

“There are a lot of John and Jane Does in Ohio that need to be identified, and to me that’s just as exciting as catching a killer.”

In both cases, Renner is hopeful that the identity of the victim can generate leads. “There are a lot of John and Jane Does in Ohio that need to be identified, and to me that’s just as exciting as catching a killer,” he says. “We have to identify the victim before we can even figure out where to start with potential suspects.”

Recently, the Porchlight Project received a major gift of $25,000 from Ashley Flowers, host of the Crime Junkie podcast, that has allowed it to start an endowment to fund its work. Renner figures it has the funding to take on another two cases right away. He also hopes it might soon be able to take on higher-profile cases, such as that of the infamous Cleveland Torso Murderer from the 1930s—and perhaps even the Amy Mihaljevic case, which recently has seen some new developments. “I think genetic genealogy could solve the Mihaljevic case and hopefully one day the Porchlight Project can help,” Renner says. “If I could choose to solve any case in the world, it’s this one.”

Ultimately, Renner hopes the project can serve as a model, shining a light to illuminate long-dark cases and laying mysteries to rest at last. “There are so many cases in Ohio, we don’t need to branch out,” he says. “But there is a need for nonprofits like the Porchlight Project in every state.”

Such an army of investigators could truly be a game changer in solving cold cases nationwide, bringing long-awaited closure to victims’ families. “The technology is so good that if you left DNA at a crime scene, you might as well turn yourself in,” Renner says. “It’s only a matter of time before you will be caught.”

Learn more about the Porchlight Project and visit James Renner's website to read more about his publications, podcasts and other projects.