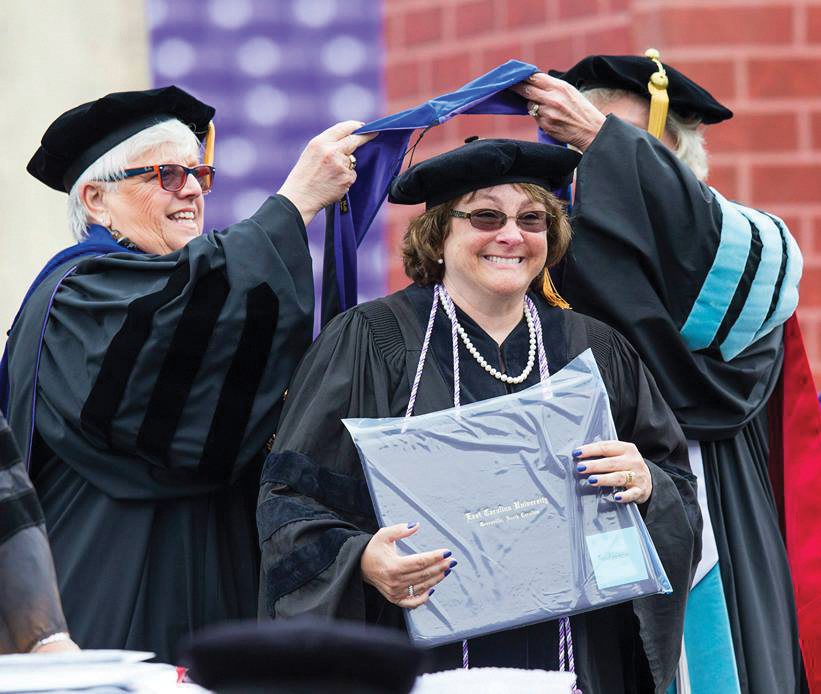 Lori Anderson, MSN, Clayton, N.C., received a PhD in nursing from East Carolina University, Greenville, N.C., on May 8, 2015. Her doctoral dissertation focused on the impact of simulation experiences in new graduate registered nurses.

Jan Jumet, BBA,  Darlington, Pa., opened an office in Boston for Allocated Financial Planning, the investment management and advisory firm that he co-founded. It now has offices in Boston; Scottsdale, Ariz.; Darlington, Pa. and Golden, Colo., with clients in 25 states.

Michael Lanstrum, BS, Middleburg Heights, Ohio, received the 2014 Dr. Idahlynn Karre Exemplary Leadership Award from The Chair Academy. In 2015 he published “Review of Mathematics for Equity” in Mathematics Teacher, a publication for the National Council of Teachers of Mathematics, and he presented “Historical Women in Mathematics” in Broadview Heights and Berea, Ohio. He also served on the geometry range-finding committee with PARCC, the Partnership for Assessment of Readiness for College and Careers.

John Koski, AA, Ashtabula, Ohio, has retired from law enforcement at the rank of lieutenant/uniform division commander, after 30 years of service. He was selected by his peers as officer of the year four times, and he received many other awards and commendations with his K-9 partner, Adrian.

Jeffery Botzenhart, BA, Girard, Ohio, is a published author of several romance novels, including Clockwork Heart (2014), and he is an artist who has displayed his drawings and paintings publicly. He also coaches soccer for autistic and special needs children.

Rebecca Stoneman-Washee, BA, MA ’97, Blanding, Utah, wrote, “I am delighted to have the opportunity to coordinate development of Navajo language curriculum materials and the creation of bilingual books for the San Juan School District. Our Navajo language materials are used in classrooms across the Southwest (see media.sjsd.org).”

Bernard Smith, MEd, Cuyahoga Falls, Ohio, has joined the Rehabilitation Counseling & Mental Health Counseling group in Ohio. He has worked with homeless veterans and battered women, and he also volunteers for Paralyzed Veterans of America, Volunteers of America, Community Outreach programs, as well as with churches and community groups for veterans and the homeless. He received the 2013 State of Ohio Volunteer Services Award for the highest number of volunteer hours (30k+).

Mark Fink, BGS, Las Vegas, Nev., associate vice provost of online education at the University of Nevada, Las Vegas, received the Center of Excellence award from the New Media Consortium for demonstrating excellence and outstanding achievement in the application of technology to teaching, learning or creative inquiry. Dr. Fink also was recognized among the “Distinguished Women & Men in Nevada” for his commitment to higher education.

Jen (Anderson) Thames, BBA, Cuyahoga Falls, Ohio, was accepted into the 2015/16 Class XXI of the Child & Family Leadership Exchange Program. She volunteered for Summit County Children’s Services  for 6 years before joining their Women’s Auxiliary Board in 2010.