Paul Nolan, BBA ’70, Los Angeles, Calif. wrote: “I was president of a California insurance company and was part of a software company that supplied the insurance industry with pricing software back in the late ’90s. I retired in 2000 and have been involved in humanitarian efforts. Currently, I am the senior consultant for Narconon International, a drug and alcohol rehabilitation organization with centers in 21 countries. I have only the fondest memories of my time at KSU.” 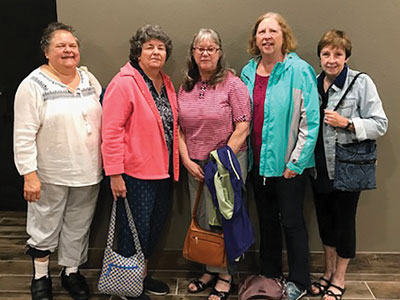 Janice (Howard) Becker, BA ’70, Westminster, S.C., wrote: “We are a group of ladies who graduated from KSU in 1969 and 1970. All of us lived in the former Van Campen dormitory in the first phase of Small Group Housing. We have kept in touch over the years and try to get together periodically. We decided that our 70th year of birth was a good excuse to meet, and five of us managed to attend our gathering in Walnut Creek, Ohio. This is a photo of us after attending the Amish Country Theater.” Pictured, left to right: Clara Vitantonio-Minadeo, BS ’70, Painesville, Ohio; Kathleen Hess, BS ’70, Cuyahoga Falls, Ohio; Janice (Howard) Becker, Lynn (Hawkins) Garver, BS ’70, MLS ’92, Culpeper, Va., and Darlene Wilkin, BS ’69, Sherrodsville, Ohio.

Margaret Joanne (Manson) Cotton, BS ’71, Point Pleasant Boro, N.J., has achieved the status of Certified Professional Photographer, said to be held by fewer than three percent of professional photographers in the US.

Elaine Cicora, BA ’73, MEd ’82, Macedonia, Ohio, a freelance journalist and editor, has won the 2018 M.F.K. Fisher Grand Prize for Excellence in Culinary Writing. This prestigious international writing contest is open to all women food writers and is sponsored by Les Dames d’Escoffier International (LDEI), a professional organization for women in the food, wine and hospitality industries. Ms. Cicora has been a member of LDEI since 1999. [Her winning entry, “Me and Chef Boyardee,” first appeared in the summer 2017 issue of Edible Cleveland.] 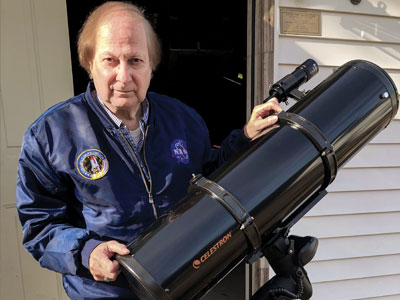 Ken Poshedly, BS ’74, Atlanta, Ga., a retired journalist and longtime amateur astronomer, was recently recognized by the International Astronomical Union for his work as editor and publisher of the quarterly Journal of the Association of Lunar and Planetary Observers since 2001, with his name being assigned to a previously discovered minor planet (asteroid), now known as “(31836) Poshedly.” The journal serves a worldwide membership of professional and serious amateur astronomers who specialize in solar system astronomy and is available both online and in hard copy.

Linda Fifer, BS ’74, MA ’75, Coeur d’Alene, Idaho, received a Who’s Who Lifetime Achievement award and a Who’s Who Humanitarian award to recognize her 43 years as a speech language pathologist; her VISTA volunteering, which developed the Western Montana Volunteer Center; and her development of Montana’s first hearing dog program, PawsAbilities. She is now devoting time to getting her first novel published.

Roger Stevenson, BA ’76, BS ’77, Fairlawn, Ohio, shareholder at Roetzel & Andress LPA, was recognized in the 2019 edition of The Best Lawyers in America in the practice area of Bankruptcy and Creditor Debtor Rights / Insolvency and Reorganization Law.

Steven Warren, MEd ’76, York, Pa., wrote: “I retired in January 2019 from my position as the county administrator for the York/Adams Mental Health and Intellectual Disabilities Program. I have held this position for the past 36 years and have worked in the mental health field since I graduated from KSU.”

Faith (Fenyves) Barnett, BA ’77, Cuyahoga Falls, Ohio, celebrated her sixth year of retirement on July 31, 2018 after 28+ years as a benefits eligibility case manager at Summit County Dept. of Jobs & Family Services. She also celebrated her 40th wedding anniversary with Robert Barnett on May 21, 2018. They met at the KSU ice rink in September 1974 upon his return to KSU from two years in the U.S. Army.

Candy Watkins, BS ’77, Tacoma, Wash., wrote: “I graduated in deaf education and entered the field of early intervention in Washington state in 1990. In 2001, I  opened
a new nonprofit [A Step Ahead] to serve infants and toddlers with special needs. Starting with a staff of five, we have grown to a staff of 40 and a $2-million budget, serving more than 700 children and families in Pierce County annually.”