Jayne Juvan, BA ’02, Twinsburg, Ohio, attorney with law firm Tucker Ellis LLP, has been selected as one of the 2019 Ohio Rising Stars by rating service Ohio Super Lawyers. Rising Stars are outstanding lawyers who are age 40 or younger or who have been in practice for 10 years or less. No more than 2.5 percent of the lawyers in a state are named to Rising Stars.

Paul Marnecheck, BA ’03, MA ’10, North Royalton, Ohio, has been promoted to director of business development for the Greater Cleveland Partnership/COSE/OHTec in Cleveland, Ohio.

Daniel Dye, BA ’04, Manheim, Pa., senior deputy attorney general in the Criminal Prosecutions Section of the Pennsylvania Office of Attorney General, received the 2018 Government Lawyer of the Year Award from the Pennsylvania Bar Association Government Lawyers Committee on November 15, 2018 in Harrisburg, Pa. He was recognized for his contribution to the groundbreaking investigation into child sexual abuse in the Roman Catholic Church in Pennsylvania. Mr. Dye organized and led a five-year investigation of seven Catholic dioceses through two grand juries, presenting hundreds of thousands of items as evidence.

Doris Briggs Zimmerman, PhD ’04, Warren, Ohio, became a fellow of the American Chemical Society in 2018 for her outstanding achievements in and contributions to the science profession and her exemplary service to the society. The 2018 Fellows were honored at a ceremony and reception on August 20, 2018, during the society’s national meeting and exposition in Boston. 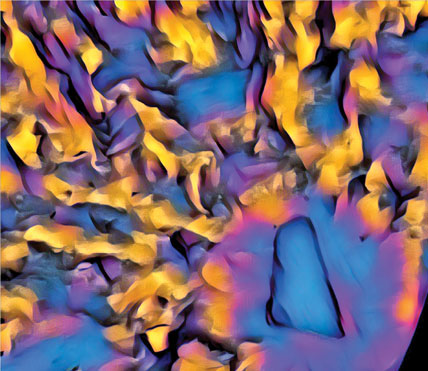 Janet Gbur, BS ’06, Canfield, Ohio, a doctoral candidate in the Department of Materials Science and Engineering at Case Western Reserve University, has been named among 17 winners of Swansea University’s 2018 Research as Art competition. Her entry (pictured above), a colorful, microscopic image depicting a flaw in a nitinol alloy wire from her dissertation work, won the competition’s External International Award and was featured with the other winners on BBC News. Judges evaluated 97 entries for this year’s competition.

David Moore, BBA ’06, Uniontown, Ohio, a transactional attorney advising emerging businesses, privately held companies and nonprofit organizations, has joined the Cleveland law office of Buckley King. Mr. Moore earned his JD at Cleveland-Marshall College of Law, and he was admitted to the Ohio bar in 2011.