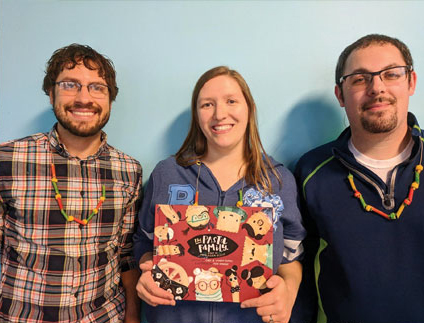 Cory Tilson, BS ’10, South Euclid, Ohio, wrote: “My wife, Laureen Tilson, BA ’11, and I, along with illustrator Alex Rodgers, BFA ’09, Stow, Ohio, have recently released our first children’s book, The Pasta Family Goes to Marinara Beach (1984 Publishing, 2018). My wife and I decided to write it after making pasta for dinner and having different types left over. We joked that it was a family of pasta, and that sparked an idea to start a kids’ book series. We all still visit Kent regularly and are proud KSU grads!” Pictured left to right: Alex Rodgers, Laureen Tilson, Cory Tilson.

Rachel Bonoan, BS ’10, Cleveland, Natalie Rodriquez, BSE ’10, Lorain, Ohio and Brooke Danforth, BSE ’13, Cleveland, were each presented with the “25 under 35” Award from their high school, Saint Joseph Academy. The award acknowledges alumni who have gone above and beyond in both personal and professional endeavors since their graduation from high school. 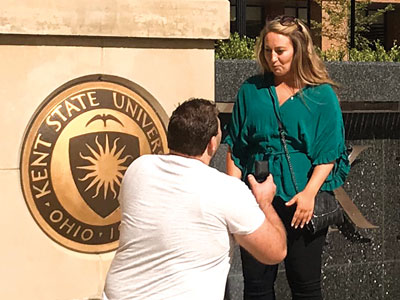 Amy (Rowland) Palsa, BS ’12, Castalia, Ohio, HR generalist with Erie County Commissioners, earned the Society for HR Management’s prestigious Certified Professional (SHRM-CP) designation after completing an intensive exam. Promoted to HR generalist in 2016, she specializes in employee wellness and benefits for 900+ employees and began her career with the county as health/wellness coordinator. Ms. Palsa is also a certified ACE health coach and fitness instructor and resides in Castalia with her husband, Ben, and son, Brody.

Benjamin Hendricks, MA ’13, Westfield, Ind., has been named chief communications officer at Kiwanis International, in Indianapolis. Prior to attending Kent State, he majored in communications with an emphasis in public relations at East Carolina University and graduated in 2000. Most recently, he was global director of public relations and social media at Teradata, a provider of analytic data solutions. 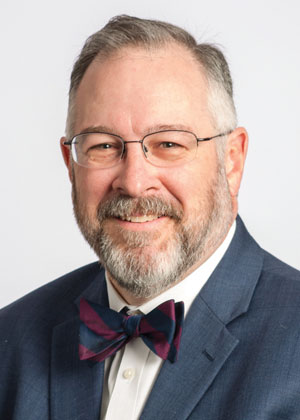 Titus Sheers, MBA ’13, Rittman, Ohio, was inducted into Cleveland Clinic Akron General’s Society of Distinguished Physicians on October 4, 2018 at the society’s 39th Annual Fellowship Dinner in Akron. Inductees are selected by their peers for excellent patient care, research, medical education and community involvement. Since 1995, Dr. Sheers has been on staff at Akron General, where he is the chairman of the Department of Medical Education and Research. He remains clinically active in the Akron Children’s Hospital’s Adult Cystic Fibrosis Center, where he is director, and Internal Medicine Clinic at AxessPointe. He is a professor of both internal medicine and pediatrics at NEOMED. A Fellow in the American College of Physicians and the American Academy of Pediatrics, he is also on the Board of Trustees at The Chapel.

Eliza Welch, BS ’14, Euclid, Ohio, veterinary assistant at Lakeland Animal Clinic and graduate student in Miami University’s Global Field Program, studied the forces of evolutionary, geologic, and social change on the Galápagos Islands and their contribution to sustainable solutions for the archipelago in summer 2018. 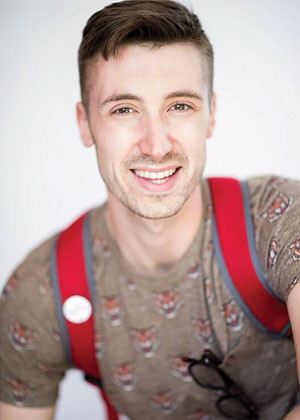 Scott Miesse, BFA ’15, New York, wrote, produced and starred in the sold-out New York City debut of his play, Abnormal, at Alchemical Studios, September 14-16, 2018. The play—which follows the journey of 21-year-old Sonny as he is diagnosed with schizophrenia—was first drafted in 2015 and grew through many readings and pre-production/development days. He and the Abnormal creative team plan to expand and remount another production in 2019. Since his graduation from Kent State, Mr. Miesse has toured the country acting and has performed in many regional theaters. Visit www.scottmiesse.com; Facebook: Scott Robert; Instagram: @king_scottrobert; Abnormal Instagram: @abnormal_nyc. 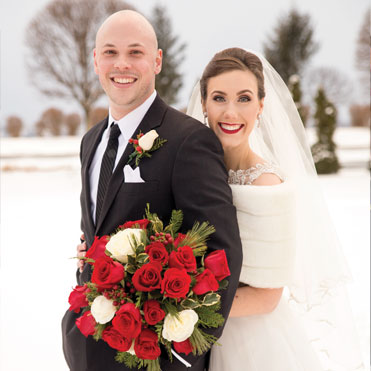 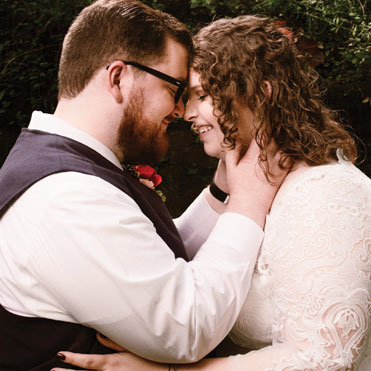 Kristen Hardesty, BS ’16, and Toby Hicks, BS ’17, Stow, Ohio, met through a friend while attending Kent State. They were married on September 10, 2017, in Peninsula, Ohio. Their wedding was photographed by classmate, Amanda Goodin, BS ’16. 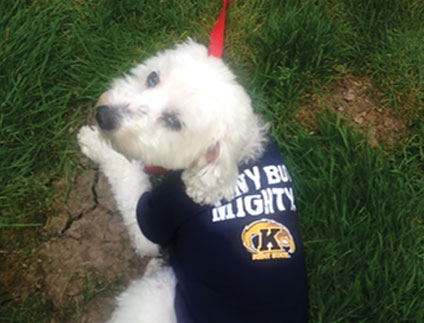 Jerry O’Ryan, MPH ’17, Centerville, Ohio, a proud alumnus of Kent State’s Masters in Public Health program, graduated at the young age of 68 and says his favorite instructor was Ken Slenkovich. He is on the advisory board for Sinclair Community College’s two-year associate degree in public health and is a trustee of the college’s Foundation Board. He and his wife, Nancy, adopted Oliver Wendell Holmes O’Ryan, (pictured above) from a rescue shelter through their connection with “Sophie’s Foundation for the Love of Animals/Sophie’s Companions for Veterans” in Dayton, Ohio.

Sarah Calhoun, BSE ’17, Columbus, Ohio, wrote: “I loved every second of my time spent at Kent State Tuscarawas as an undergrad! At the scholarship luncheon I made a speech vowing to use my degree to teach inner-city youth the beauty of education, and I can happily say that I am fulfilling my dream. I accepted a position teaching third grade in inner-city Columbus and began teaching in August, 2018. Thank you, Kent State, for investing in me, and I look forward to investing in my students.”