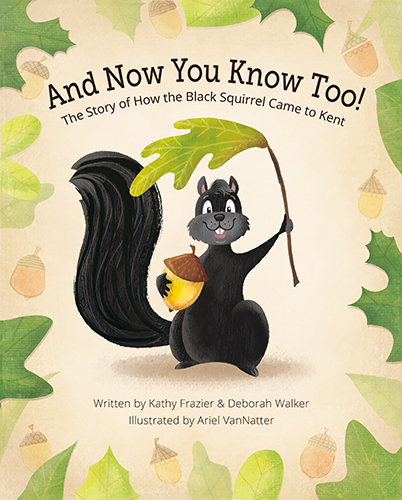 Kathy Frazier BA ’70, MA ’75, EDS ’81, Kent, Ohio, and Deborah Walker, MA ’78, Kent, Ohio, are educators who established a consulting company, Touching the Future Today, which provides professional development in the area of creative thinking, problem solving and integration of the arts into the curriculum. They co-wrote a children’s book, And Now You Know Too!: The Story of How the Black Squirrel Came to Kent, illustrated by Ariel VanNatter, BFA ’15, Lakewood, Ohio, so all ages can learn the true story. You may purchase the book at Off the Wagon in Acorn Alley in Kent or through touchingthefuturetoday.com.

View other alumni authors at ksualumni.org/alumniauthors.

Harry Dempsey, MM ’77, Stanwood, Mich., wrote: “After 39 years of teaching music at Ferris State University, I retired at the conclusion of this academic year. I also served as band director at Chanel High School in Bedford, Ohio, and held a graduate teaching assistantship at Kent State (1973-75) working with the Marching Band, Basketball Show Band and Tuesday Jazz Band. Although I have retired from teaching, I will continue to perform with various bands.”

James Thompson, BS, Oldsmar, Fla., has retired. After earning a master’s degree from the American Graduate School of International Management in Glendale, Arizona, his career spanned more than 30 years with AT&T, American Express TRS, Thomas Cook Travel USA, and Travelocity. He was credited with innovation and automation of the travel industry and played a major role in the development and implementation of call center technology. He and his wife of 39 years, Barbara, have two sons and two grandchildren.

Dixie Benshoff Ludick, MEd, PhD ’77, Aurora, Ohio, was inducted into her high school Hall of Fame on October 24, 2015. She received the Academic/Career Accomplishment Award due to her contributions to the field of education and psychology. Formerly a department director at Akron General Medical Center and the Cleveland Clinic, Dr. Benshoff Ludick has provided psychological and educational services to Northeastern Ohio Universities College of Medicine. She is married to Tim Ludick, a magistrate, and their son, David, is a student at Kent State.

Vincent Mintus, BS ’74, Lake Worth, Fla., wrote: “I served for 22 years as a Delray Beach police detective in organized crime and the major crimes divisions. After I retired, I worked for the Palm Beach County School District as a detective specializing in sexual crimes against children. I retired from there in 2013. I now do background investigations for the Delray Beach Police Department—fortunately working from home.” 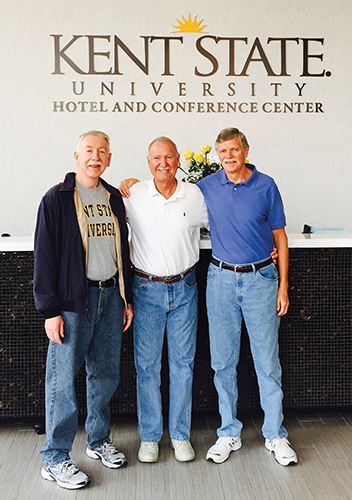 Vincent Mintus, BS ’74, Lake Worth, Fla., used his skills as a detective to reconnect with his college roommates. “For the past 8 years, we have returned to Kent State to attend May 4 commemorations and occasional football games. Kent is a great city, and Kent State is the best of universities. We love coming home!” Pictured from left: Loren Harris, BBA ’72, Johnstown, Pa., Vincent Mintus, Richard Loibl, BA ’72, Atlanta, Ga.

Sally Burnell, BA, Kent, Ohio, wrote: “I am the discoverer and co-owner, along with three other individuals, of the historic 1858 Kent Wells Sherman House, relocated to North Water Street in downtown Kent in 2013 and restored in 2014. I retired from my career in library work in 2013, after 30 years, to devote my time to historic preservation advocacy.”

Gerald Canton, BS, MEd ’98, Chagrin Falls, Ohio, was elected to the South Russell, Ohio Village Council on November 3, 2015. After a 30-year career as a classroom teacher, he joined the Chagrin Falls Local Schools staff as a substitute teacher.