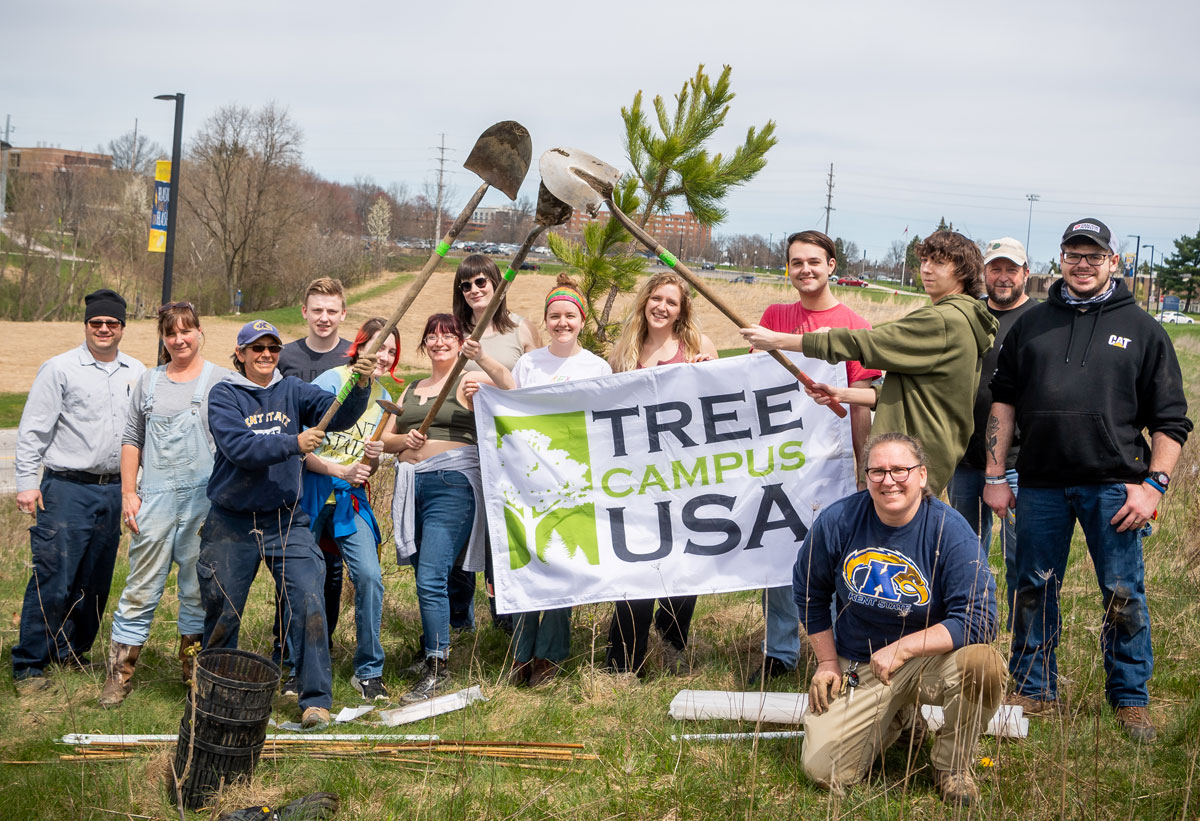 Volunteers from the tree advisory board, the grounds department and the Herrick student organization meet to maintain the Climate Change Grove during an Arbor Day/Earth Day event on April 22, 2022.

Survival of the Trees

Imagine a day when Ohio’s environment is unable to sustain native trees like the sugar maple, which produces the sap distilled into Ohio maple syrup—or the Ohio buckeye, our state tree.

Research underway at the Climate Change Grove on the Kent Campus is shedding light on what may happen to native tree species if we don’t address the carbon emissions that are causing global warming.

The tree grove, which sits on a parcel of land behind the Warren Recreation and Wellness Center, was established in 2018 through a partnership between University Facilities Management and the Department of Biological Sciences in the College of Arts and Sciences. The grove serves as a living laboratory for teaching biological sciences and conducting climate change research, as well as a reforestation effort.

Melissa Davis, BS ’04, MS ’10, horticultural facilities director for biological sciences, says she came up with the idea for the grove after attending a US Forest Service presentation on climate change.

“The idea was that, as the climate changes, the flora would either have to be able to adapt or would perish,” says Davis, who immediately thought of trees. “Trees are so special in our world. They clean the air we breathe, they’re a source of food (fruits and nuts) and shelter (building materials). They provide shade, help cool our homes and reduce our energy costs.”

Davis thought the open space behind the recreation center would be the perfect spot for planting a variety of trees to see which could adapt as the climate warms. 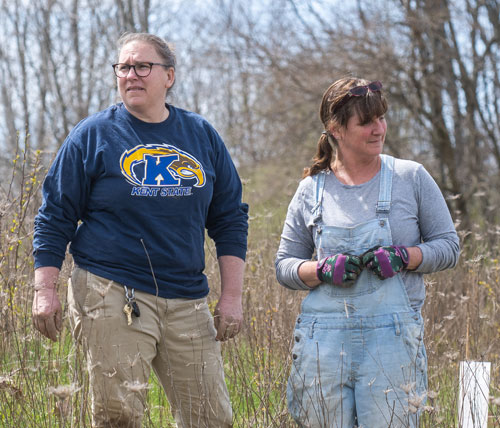 Davis is researching which tree species could best survive climate change in partnership with the biological sciences department, the Kent State University Tree Advisory Board and facilities management. The research also will help Berryhill’s groundskeeping team maintain the landscape of the Kent Campus, which has received repeated “Tree Campus USA” designations from the Arbor Day Foundation in recognition of the university’s tree planting and conservation efforts.

Rebekkah Berryhill, BS ’02, grounds manager for facilities management, says the grove represents a win for the university on several levels.

“We’re always looking for partnerships to help students learn and to grow our canopy cover,” she says, noting that previously the land was wasting resources. “We were using fuel to mow the area and treating it with herbicides and pesticides. It’s a beautiful stretch of land; the idea was maybe we could try to reforest it.”

The grove was planted by students from biological sciences, many of whom are members of the Herrick Conservatory and Sustainability Club, which Davis advises, as well as faculty, staff, alumni and volunteers. Davis says little work was done during the pandemic, in 2020 and 2021, so a joint Arbor Day/Earth Day event took place on April 22, 2022, when members of the tree advisory board, the grounds department and volunteers from the Herrick student organization cleaned up the grove and assessed how the trees are faring.

The grove holds species native to Northeast Ohio, as well as others that typically require warmer climates to thrive.

“Climates are changing so fast, species cannot adapt quickly enough—and that is when we will lose species.”

“Climates have been changing throughout geological time frames,” Davis says. “The problem now is climates are changing so fast, species cannot adapt quickly enough—and that is when we will lose species.”

Climate change models are as dynamic as climate change itself, Davis adds. “That’s why I thought it would be interesting to test the models in a real-world application.”

Research from the US Forest Service already suggests some startling examples of what trees will be winners and losers as Ohio’s climate changes. While earlier models for the sugar maple predicted substantial habitat decline in southern Ohio under harsh climate change, recent models rate the sugar maple as highly adaptable—although under persistent drought or other stresses, it could still decline.

Among the losers would be two native species: black cherry and the Ohio buckeye. Davis says often people don’t understand what is at stake.

It’s not too late, though, for the global community to take steps to reverse climate change and save native species from extinction, she says. “A place like Kent State University that fosters education can do this outreach and become a part of this effort.” 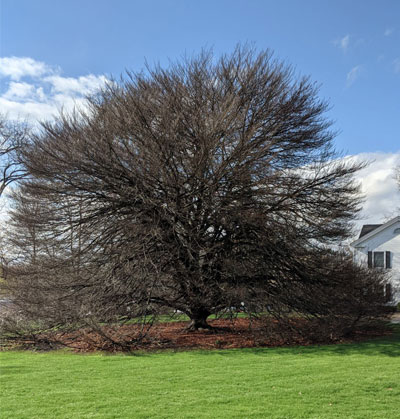 This year’s Herrick Conservatory Plant Sale included cutleaf beech trees (Fagus sylvatica ‘Asplenifolia’). The trees were part of a grafting project that began just prior to the pandemic as a group effort with Kent State University Tree Advisory Board members, the Herrick student organization and partners from the Ohio Independent Arborist Association.

The effort was initiated to save a campus tree that dates to the time of the original carriage house, located next to the Women’s Center on Front Campus (see photo). The tree, which is reaching its maturity, was originally scheduled to be cut down to accommodate a new parking garage as part of a Master Planning phase, but that plan was abated when the pandemic hit.

“It’s a real winner in my book,” says Melissa Davis, horticultural facilities director, noting that American beech trees are listed as a tree species with “not much change predicted” in future changing climates.

If members of the university community and beyond would like to own a piece of Kent State history to plant in their own yards, this special horticultural variety is just $90/tree. Contact Melissa Davis at mdavis7@kent.edu or call 330-672-2469.