Meeting of the Minds

Undergraduate research is thriving at Kent State, as students and their faculty mentors find mutual benefit in their collaborative efforts.

Scientific research, scholarship and artistic work don’t happen in isolation by lone individuals in a lab, study or studio. Such pursuits are usually part of a collaborative effort. Most creative people will tell you they owe much to mentors who help them focus ideas, find resources and figure out a way forward—who believe in them and encourage them to keep going. And mentors say these relationships enrich their lives and work, as well.

It was easy to find these kinds of stimulating partnerships at Kent State’s second annual Undergraduate Research Symposium on Research, Scholarship and Creative Activity in March. More than 120 undergraduate students across Kent State’s eight campuses presented their work—and their enthusiasm for solving real-world problems—with their faculty mentors by their side or watching from the sidelines.

We highlight that spirit of creative collaboration in the four partnerships profiled below, selected from among those who won first-place awards. But everyone who participated was a winner. “You have chosen not to wait for the challenges to come to you after graduation,” noted Provost Todd Diacon, Ph.D., whose idea to celebrate undergraduate research and innovation sparked the event. “Instead, you have taken on the real-world challenges now!” 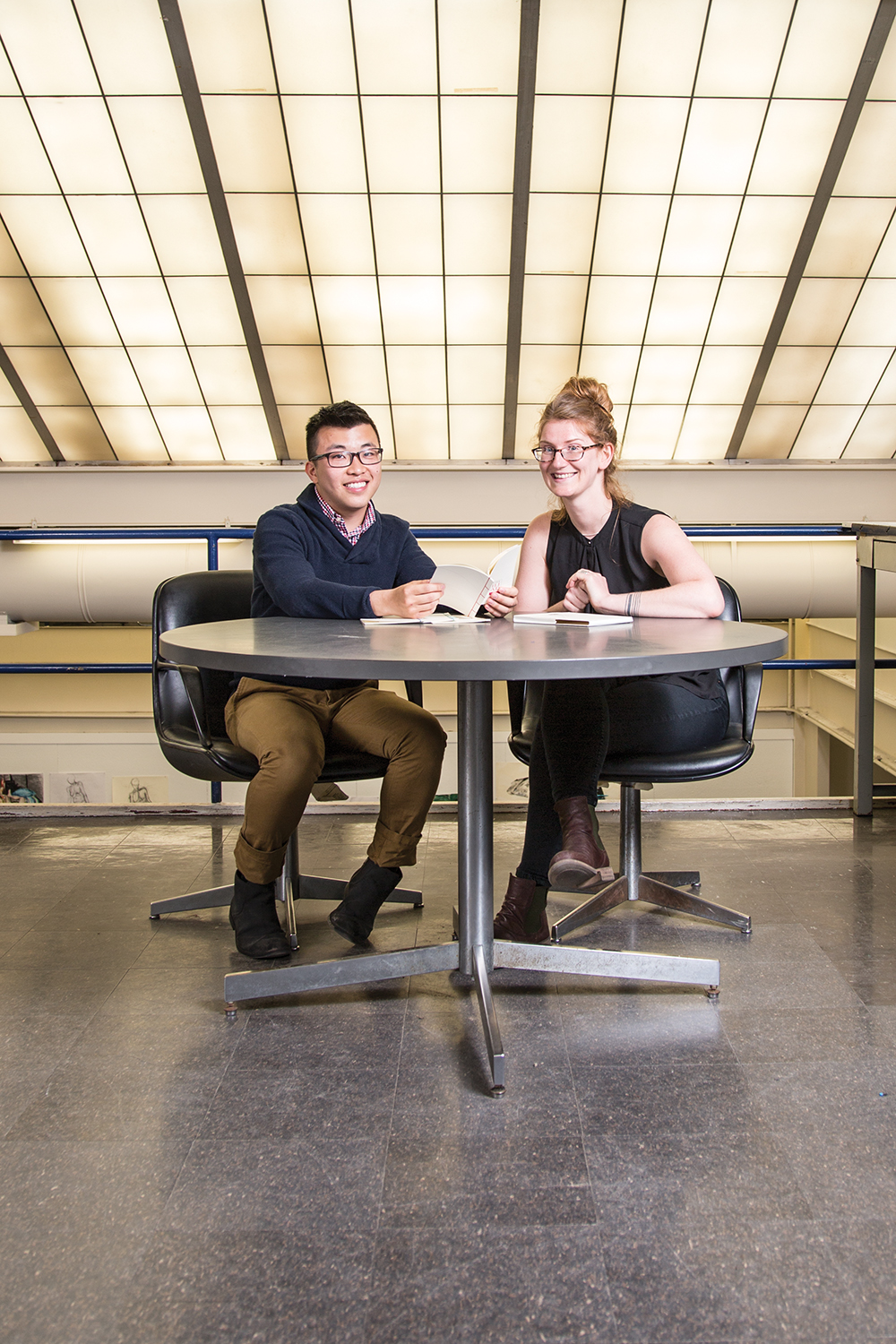 William Scharlott had never taken a design class when he signed up for Intro to Typography, but his teacher, Aoife [pronounced ‘E-fah’] Mooney, M.A., an assistant professor of visual communication design, soon realized he was unusually talented for his age. And he discovered that typography was a category for something he’d always loved: “My earliest memories are of shapes, colors and lines.”

After teaching him again in her Graphic Design 1 course, Mooney asked if he’d like to enter an assessment of student work by the International Society of Typographic Designers.

“Will is an excellent typographer, a very good researcher and presenter, so I thought he could do it,” Mooney says, even though Scharlott was a sophomore and most applicants for admission to the society were in their third or fourth year. “He said, ‘This sounds like a lot of work. I’m in!’”

His brief was to take a classic text and reinterpret it for modern readers who appreciate type. He chose The Iliad because it was the first bedtime story his parents read to him. (His mother is a librarian, his father a professor.)

Scharlott investigated how to reinvigorate the text through manipulating type—easier to do on a computer than in manual typesetting—to create an emotional response in the reader.

For four months, they met weekly. Mooney would critique his work, give him feedback, and he’d rework it. Says Scharlott: “She’s a wonderful teacher. She helped me with the general (‘this is looking good, but the composition could be better’) and the precise (‘this could be moved up one pixel’).”

Scharlott entered his final project in the undergraduate research symposium, and over spring break, Mooney took his project, along with six other entries from the school, to London for the assessment. Although he didn’t get in to the society this time, the judges were impressed, and Mooney was proud of his effort.

“I’d love to try again,” says Scharlott. “Working with Aoife was a privilege, and submitting it to the undergrad symposium was rewarding. Anything else didn’t matter. I had already gained the experience.” 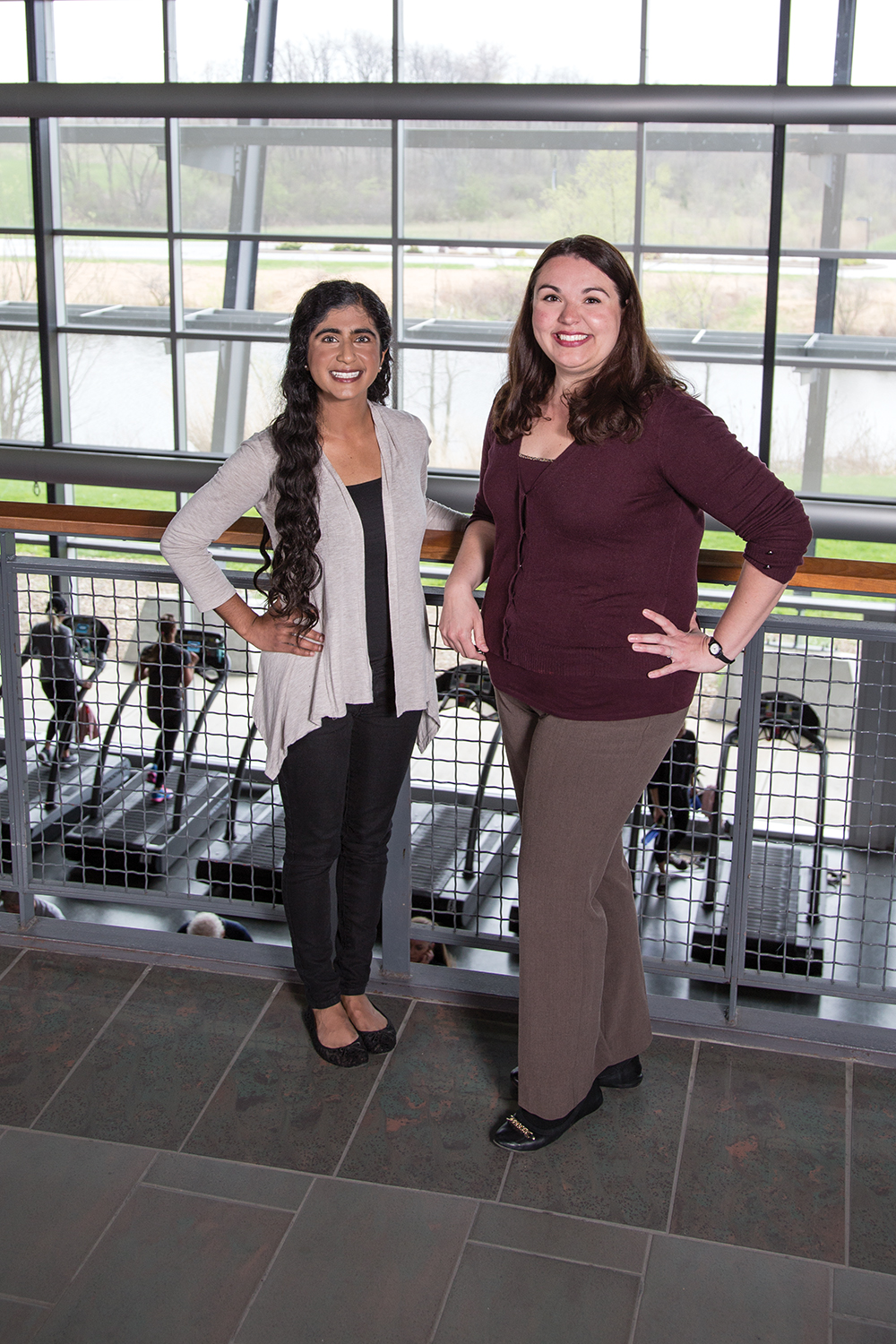 Exploring the effects of exercise

Aneela Qadir, a psychology major, noticed she could do homework after going for a long run, but writing a paper after finishing an intense crossfit class was a challenge. So she wanted to compare endurance and high intensity interval training to see their effects on students’ mood and cognition. She approached Misty Hawkins, Ph.D., a postdoctoral research associate in psychology (whose lab she’d volunteered in last fall), and asked if she could do her own study.

Hawkins appreciated Qadir’s skills as a research assistant and agreed to help the Honors student implement her idea—with some adjustments. “Her original idea would have taken months, but the longer the study, the more participants drop out,” says Hawkins. She met with Qadir regularly and helped her think through a series of questions that addressed things like study type, source of funding and safety concerns.

The planning and approval process (Qadir also had to meet with the University’s Institutional Review Board) took a little over a year; the actual study took about 100 hours. She found that all three of her study’s interventions—endurance exercise, high intensity exercise, watching a relaxing video—were helpful in returning participants to their normal mood after a stressful event (delivering an impromptu three-minute speech while being “videotaped”). But the group doing the endurance exercise showed significant improvement in attention over the others. (So students may not want to work out or sprint to class before taking a test.)

“I won an award, but if it hadn’t been for Dr. Hawkins, I never would have gotten this far,” says Qadir, who is heading to Colorado State University to pursue a master’s in public health concentrating in physical activity and healthy lifestyles.

“We talked a lot about balance,” says Hawkins. “Besides research aptitude, you have to consider a researcher’s ability for time management and self-care. Aneela was good at that, too—with some reminders from me. I was blown away watching her come up with ideas and do the project. Plus, she inspired me to carve out more time for exercise.” 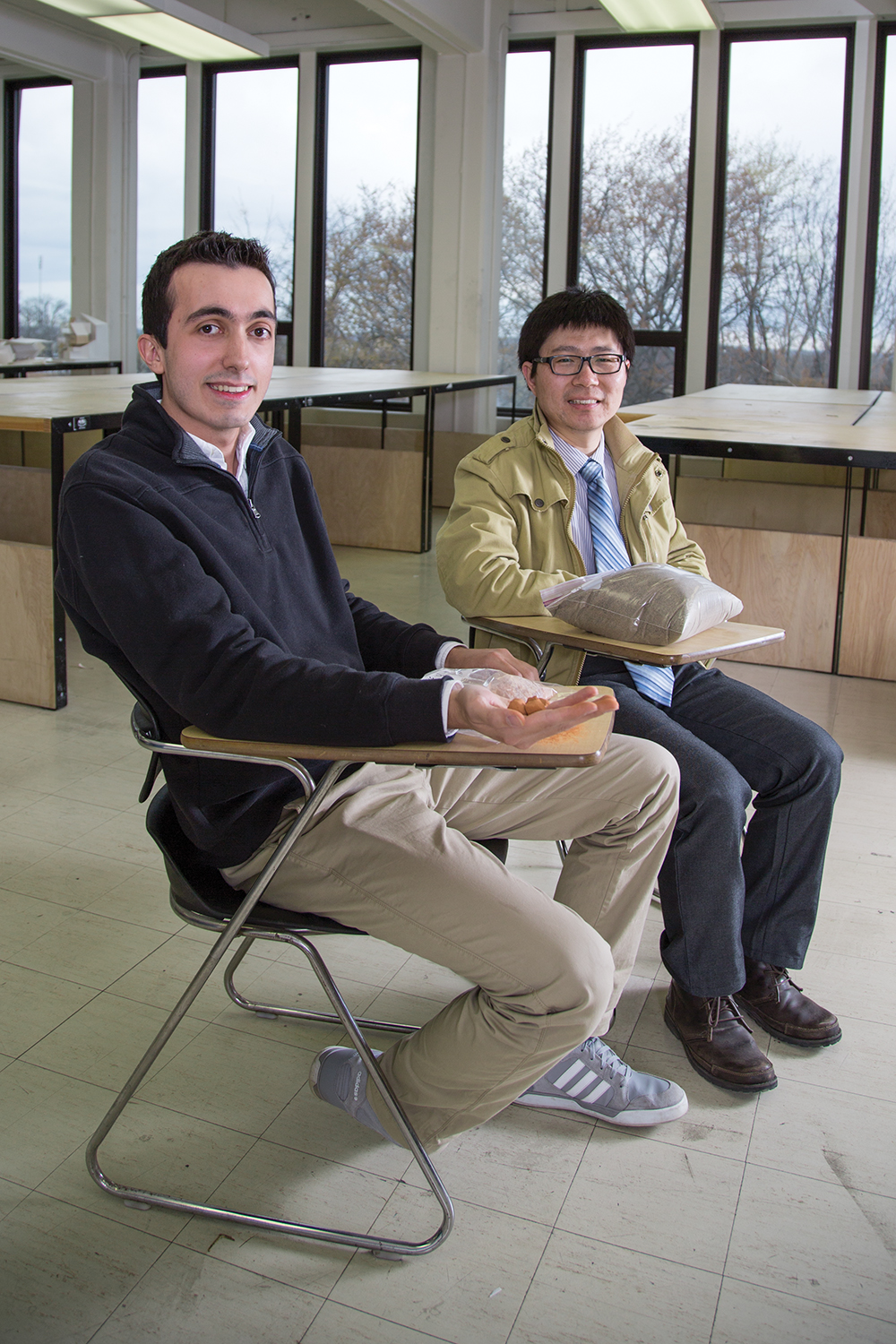 Turan Akman*, a junior architecture major, is concerned about sustainability. When he heard his Structural Systems professor, Rui Liu, Ph.D., talk about his research project studying innovative and beneficial uses for dredged material from Cleveland Harbor, he asked if he could go with him to meetings about the project. Liu, an assistant professor of architecture, later hired Akman as a research assistant, with support from Ohio’s Lake Erie Protection Fund.

More than 1.5 million cubic yards of sediment must be removed annually from Lake Erie to keep Ohio’s channels and harbors clear. Cleveland built a confined storage facility to contain the dredged material, but it’s filling up fast and other Ohio communities need to deal with their dredged material, too. Placing it further out in the water harmed the lake’s ecosystem, and putting it in landfills is costly and depletes land resources. Liu hopes to develop alternatives.

“The project started in January, so over winter break I sent Turan background information to read, and he picked it up quickly,” says Liu. Akman bakes samples of dredged material taken from the storage facility in a ceramics kiln to evaluate its possible performance for use in green roofs, rain gardens, 3D building materials and even arts and crafts.

He brings the results of his experiments to Liu and they discuss next steps. The initial firing raised the temperature too quickly, and some of the material exploded—lesson learned. This trial and error process helps students develop critical thinking and time management skills, says Liu.

Akman, who commutes to Kent from Cleveland, isn’t sure what he’ll do after he graduates next year—he’ll either go on to graduate study at Kent State or apply to another research intensive school like Princeton, Harvard or MIT. “I’m hoping this undergraduate research will help me get in the Ivy Leagues,” he says.

*Turan Akman was formerly known as Muhammed Bahcetepe, and is referred to by this name in the printed version of Kent State Magazine. Updated as of January 22, 2018. 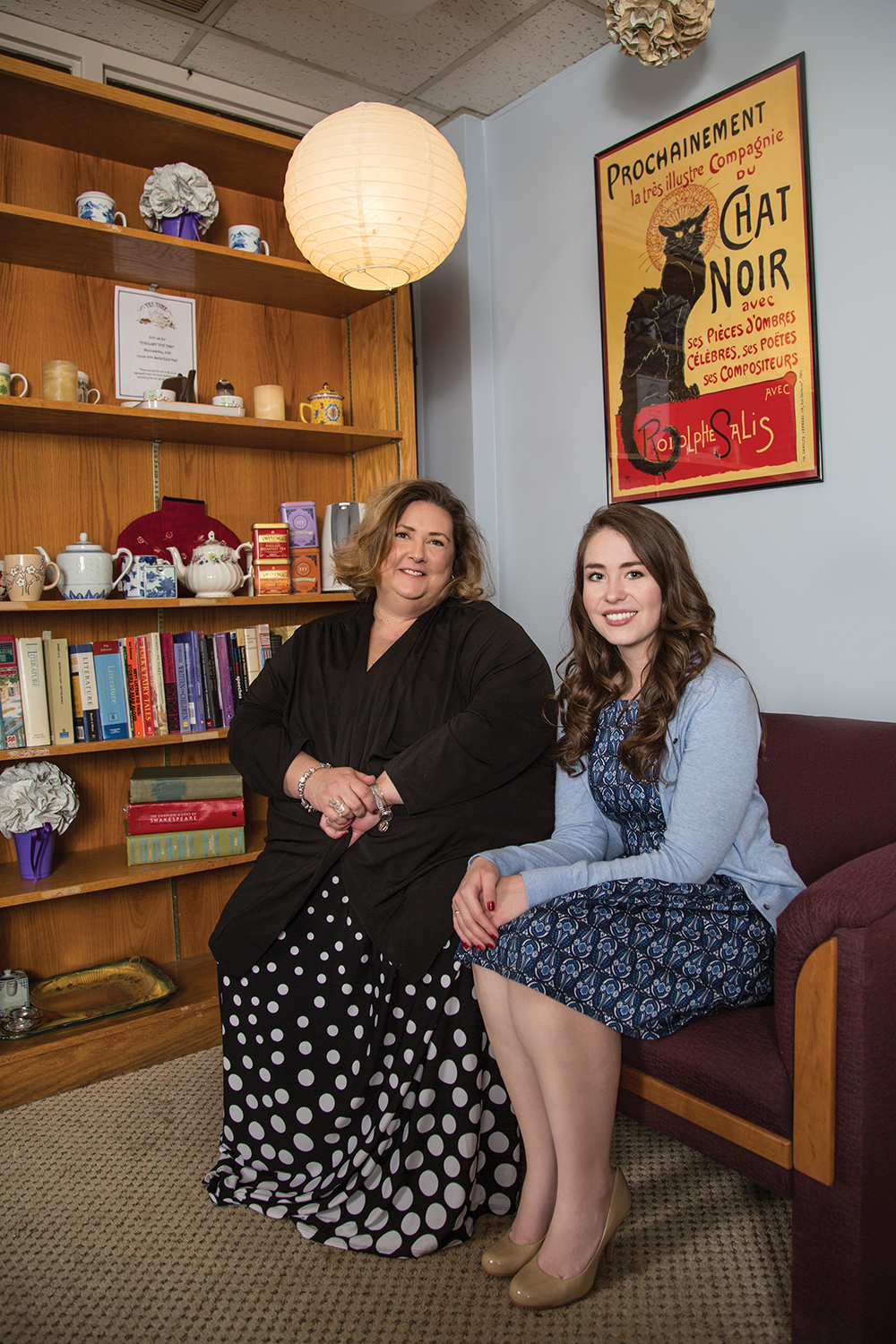 Focusing on the femme fatale

Hagan Whiteleather loves black and white movies, and when she took a class in which she had to make a website about a topic of interest, she chose film noir. “As I researched the topic, I saw ties between film noir and pulp fiction,” says Whiteleather, an English major. “It was time to pick a topic for my Honors thesis, so I decided to explore it further.”

The scholars she read in her literature review mentioned that the femme fatale (a seductive woman who lures men into dangerous situations) was a result of male anxiety, but they didn’t go into depth.

Then she read a book about Rosie the Riveter and realized that she had been a form of propaganda during World War II. Toward the end of the war, though, propaganda about strong, independent women working to help the war effort took a sudden shift. They were expected to head home and make way for men returning to the workforce.

Since films with femme fatale characters emerged in the mid-1940s, near the end of the war, Whiteleather wondered if they had been propaganda, too—serving as a cautionary tale to post-WWII women that independence leads to disaster, female autonomy will be your downfall and overt sexuality will be punished, usually by death.

She’d read 26 books and watched 15 films to see what was going on during that period, and as she broke down the actions and dialogue in five films, she turned to her advisor, Kimberly Winebrenner, Ph.D. (an English professor with whom she’d taken two classes, Women’s Lit and U.S. Lit), to help her sort through her jumbled thoughts.

“Sometimes when students talk about an idea it helps them organize and understand what they already know,” says Winebrenner. But Whiteleather credits her professor with helping her focus her ideas—and figure out when to stop. “At times she would be anxious about the project, but I’d say you’re doing a great job,” says Winebrenner. “Finally, I had to say, ‘Okay, you’ve done enough’—or her thesis would have been much longer!”

“She kept me sane,” says Whiteleather, who is applying to grad schools in the fall and taking a year off to save money and spend time with her family before she heads back to school. She plans to be a professor of English literature—just like her mentor.