Don Rung, BBA ’70, Amelia Island, Fla., wrote: “In my retirement, my wife and I have formed Camp Angels, a nonprofit that helps financially challenged children with diabetes attend specialized summer camps across the United States (www.campangels.com). Since 2003, we’ve helped more than 2,600 children attend diabetes camps where they learn how to manage their life-threatening disease and meet hundreds of other children facing the same daily challenges.”

John Hayes, BA ’71, MA ’73, West Palm Beach, Fla., has been appointed the Titus Chair for Franchise Leadership and director of the Titus Center for Franchising at Palm Beach Atlantic University in West Palm Beach. He taught journalism at Kent State Trumbull (1971–1974) and Kent State Stark (1974–1976). After completing his doctorate in 1985 at Temple University, Dr. Hayes left academia to build a marketing and public relations business that specialized in franchising. Later he became the President & CEO of HomeVestors of America, Inc., the “We Buy Ugly Houses” franchise. He is the author of more than 25 books, most about franchising. During the past seven years Dr. Hayes served on the faculty of Gulf University for Science & Technology in Kuwait, where he held a dual appointment in mass communications and business administration. His appointment in Florida includes dual assignments in the Rinker School of Business and the School of Communication and Media.

Bill Truby, BS ’72, MEd ’84, PhD ’92, Valdosta, Ga., professor at Valdosta State University in the Graduate School of Education, wrote: “Fraternity brother and Hall of Fame Coach Lou Holtz, BS ’59, Orlando, Fla., and I met in Valdosta recently, when Coach Holtz was in town to speak at the annual banquet sponsored by Georgia Christian School. (In the 10-year history of the banquet, other notable speakers have included George and Laura Bush, quarterback Terry Bradshaw, and Governor Mike Huckabee, among others.) Hopefully, golf is on the agenda for future visits!” Pictured (l to r) Bill Truby and Lou Holtz.

William Gordon, BGS ’73, Los Angeles, Calif., is releasing an updated e-book version of his book The Ultimate Hollywood Tour Book to celebrate the 25th anniversary of what has been called the bible of L.A.’s sightseeing industry. Including new entries and color photographs, the book covers homes to the stars, filming locations of movies and TV shows, sites that inspired songs, as well as sites of scandals, murders and suicides.

Susan (Weisenbach) Johnson, BS ’74, Avon Lake, Ohio, wrote “I’ve worked for NASA for four decades, currently as an engineer project manager at NASA’s John H. Glenn Research Center at Lewis Field in Cleveland. In August, I received NASA’s Exceptional Service Medal for sustained performance of NASA’s Aeronautics missions and goals. The NASA Administrator approves a small number to be awarded each year. This is another highlight in my career!” 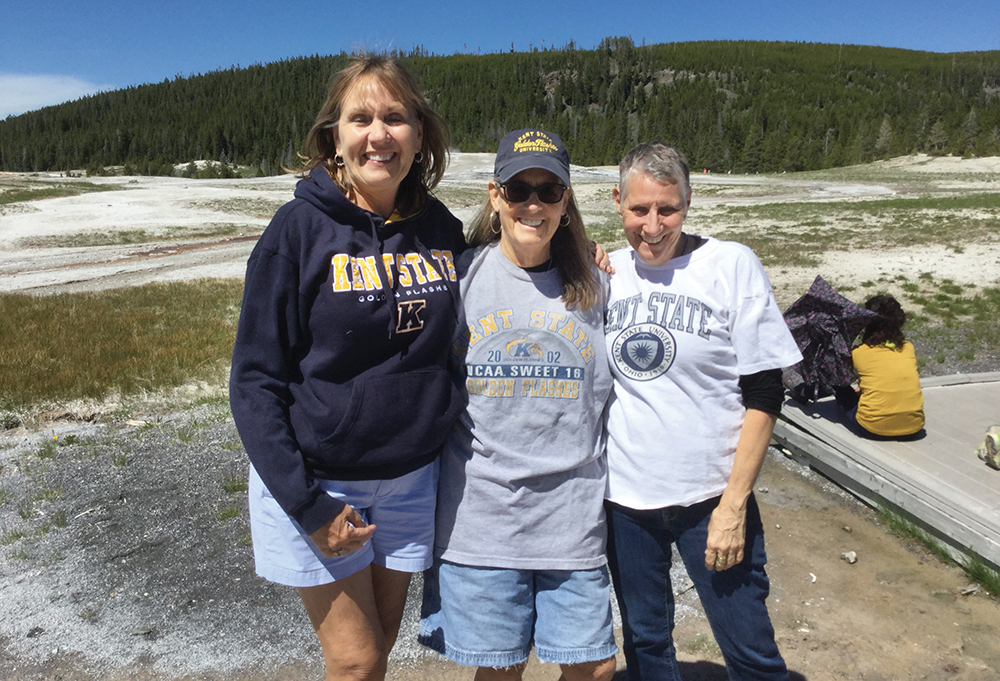 Marcy Albert, BS ’75, Tucson, Ariz., wrote: “I met my two college roommates our first year at Kent State in Fletcher Hall, and they continue to be my closest friends. Doesn’t get better than that! This photo was taken at Old Faithful in Yellowstone National Park this summer.” Pictured (l to r): Loren Cuppy-Combs (Smith), BS ’76, Bozeman, Mont.; Marcy Albert, and Joanne Schneider, BS ’76, Tucson, Ariz.

Mathew McIntosh, MA ’77, Hagerstown, Md., headmaster of Grace Academy in Hagerstown, has written Faith’s Fortune–The Trilogy, which was nominated by Xulon Press for the 2017 Historical Fiction Book of the Year. Dr. McIntosh recently served as dean of Academic Affairs at Kent State University–Geauga, and his daughter, Laura McIntosh, is a 2014 graduate of Kent State. 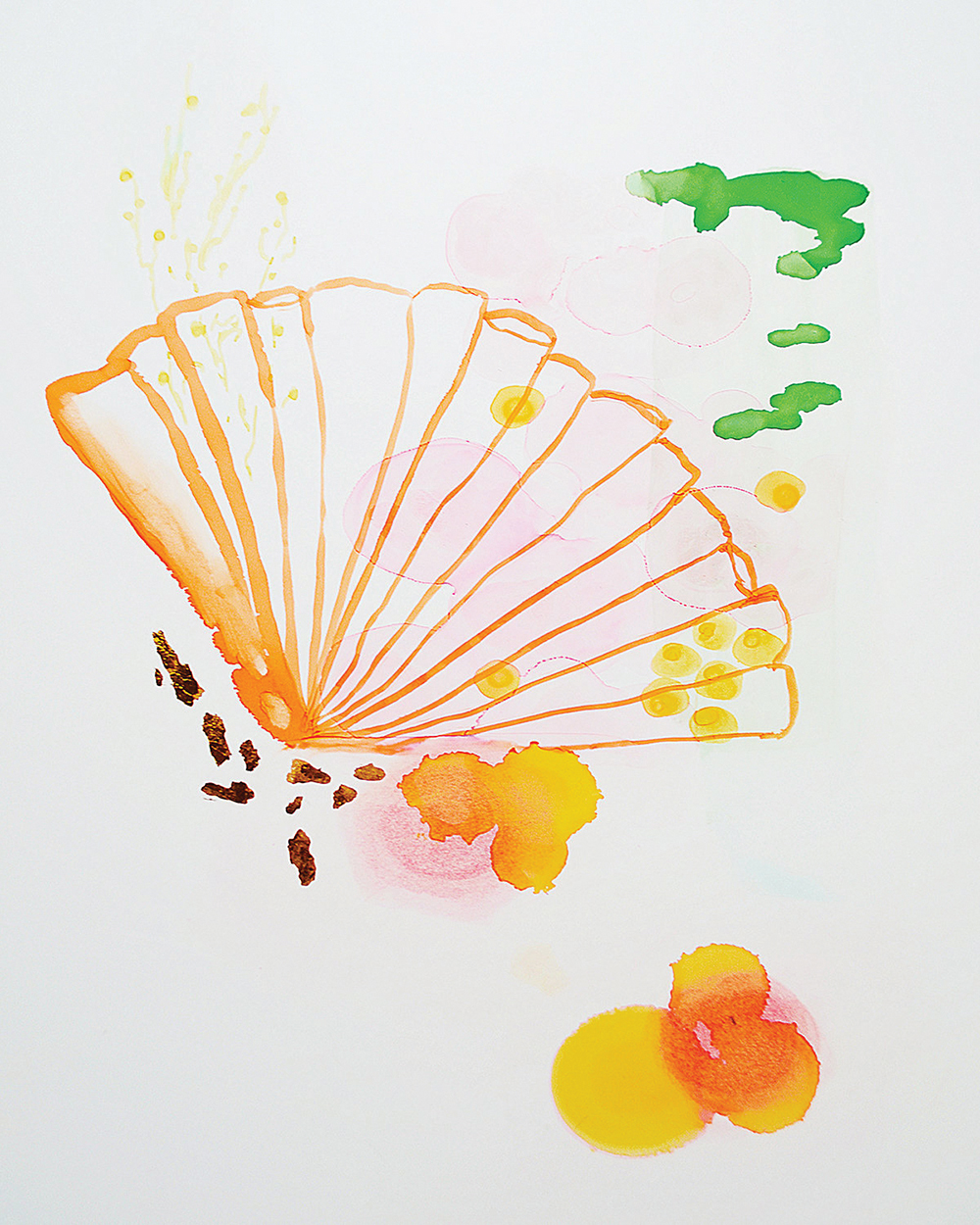 Bill Ayars, BArch ’79, Bay Village, Ohio, principal of Perspectus Architecture in Cleveland, republished his 2015 memoir, The Big Muddy, with a new foreword and ending, after his daughter, Jennifer, died at age 28 from a drug overdose soon after its original publication. Ten dollars from each sale of his book (www.thebigmuddybook.com) will go to the Emerald Jenny Foundation, which Ayars launched to help find people struggling with drug addiction find treatment in Ohio.

Bruce Kirk, BGS ’79, Lynchburg, Va., was named founding dean of the School of Communication & Digital Content at Liberty University in Lynchburg, Va. Dr. Kirk joined the Liberty faculty in 2009 after more than three decades in broadcast media. He is the winner of five Emmy Awards, including one for a 1980 documentary on the 10th anniversary of the Kent State shootings. He is the son of the late KSU administrator, Dr. Charles Kirk.